On February 16th, a heavy police operation broke into the University of Lleida (Catalonia) to arrest Spanish rapper Pablo Hasel, who had been sentenced to prison for glorifying terrorism and denigrating the monarchy in lyrics and tweets.

Dozens of supporters who had locked themselves in the university with the artist were chanting for the rapper’s freedom, whilst the Mossos de Escuadra, the Catalan police, made their way through barricades of chairs and tables to ultimately put the singer in shackles.

“This fascist state will not stop us. Full amnesty,” shouted Hasel while raising his fist as he walked out of the university, where he had been hiding for days to avoid arrest after disobeying a court order to enter prison voluntarily.

The rapper has been sentenced to nine months in jail, even though the sentence will increase to more than two years because the singer has refused to pay a fine of €24,000 (£21,700).

Charges against Hasel consist of a song and 62 tweets he wrote between 2014 and 2016, in which he firmly attacks politicians such as Patxi Lopez, a Socialist Party congressman, rhyming that “his car deserved to blow up.” Hasel also denigrated members of right-wing parties, singing: “I will not feel sorry if you get shot.”

The Spanish monarchy has been widely criticised in his lyrics, saying some members of the Royal Family deserved the death penalty for “spending our money on cosmetic operations”.

Former King Juan Carlos, now exiled in Saudi Arabia, has been a recurring theme in Hasel’s tweets, denouncing the King’s shady arms deals, the payoff to his lover Corinna for her silence, and his elephant hunts in Africa. This is one of the latest songs Pablo Hasel uploaded days before his arrest:

The singer argues that his comments are under the right to freedom of expression. However, the National Court claims his imprisonment goes beyond tweets and songs. The rapper has two pending convictions for attacking a journalist and for beating an unfavourable witness in a trial.

However, the Spanish Government is considering a presidential pardon for the rapper, as it considers that the sentence is unfair and violates free speech laws.

“We understand that it cannot be democratic normality that, while the investigation into alleged corruption in the monarchy is being closed, those who criticise it in songs are imprisoned,” said Jaume Asens, spokesman for the coalition government party Podemos.

Hasel has also received support from the cultural community in a document signed by more than 200 artists, including film director Pedro Almodovar and actor Javier Bardem.

The document states that “Spain is on top of the list of countries where artists have been most repressed for the content of their songs.”

Hasel’s case is not the first. Freedom of expression in Spain has been questioned in recent years, as several artists have been imprisoned for similar actions.

One of them is the case of rapper Valtonyc, exiled in Belgium after being sentenced to prison for singing “Los Borbones son unos ladrones” (The Royal Family are thieves).

Another case is that of the two puppeteers sent to jail for a satirical play in which they made a joke with the words Gora Eta [long live ETA]. 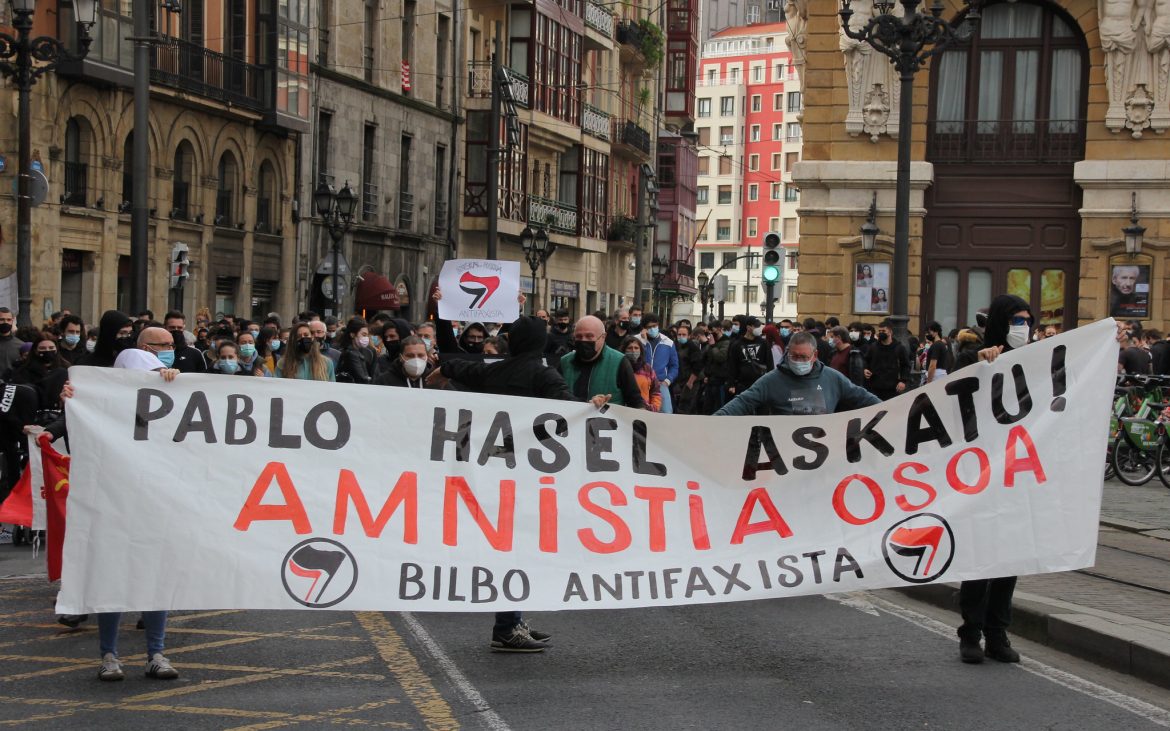 Hasel’s arrest sparked a wave of protests in several Spanish cities. In Barcelona, largely peaceful demonstrations led by young people demanding the rapper’s release turned into violent riots and clashes with the police.

On last Saturday’s demonstration, attended by 4000 people, protesters looted shops, vandalised offices and burned a police convoy with a police officer inside. Clashes with the police resulted in dozens of arrests and numerous injuries, including a woman who lost her eye after being shot by the police.

“Until they fall. Nothing to lose. Everything to win”, read the banner at the beginning of Saturday’s march. The protests against Hasel’s arrest have become the stage for young people to express their anger at the difficult economic situation accentuated by the pandemic.

“Hasel’s case is the straw that breaks the camel’s back. We have accumulated a lot of anger. We have precarious jobs, miserable salaries, and few opportunities. This is our way of expressing our discontent,” explains Joan, 24, a politic science graduate who works as a delivery driver for Glovo.

Spain is the EU country with the highest rate of youth unemployment. The minimum wage is also among the lowest in Europe. The pandemic has also aggravated the economic situation.

The criminalisation of young people throughout last year, who have been blamed countless times for spreading the virus, has also contributed to the situation.

Public health secretary Josep Maria Argimon sympathised with protesters, saying that “We have told young people: stay at home; if you don’t have a job, forget about it because the situation is tough; if you study, take online lessons; if you practice sport, do it at home”, he said at a press conference following the protests.

“We forbade them to socialise, to go out at night, to have fun. Behind the protests of the last few days, there are many more things than Pablo Hasel,” he added. 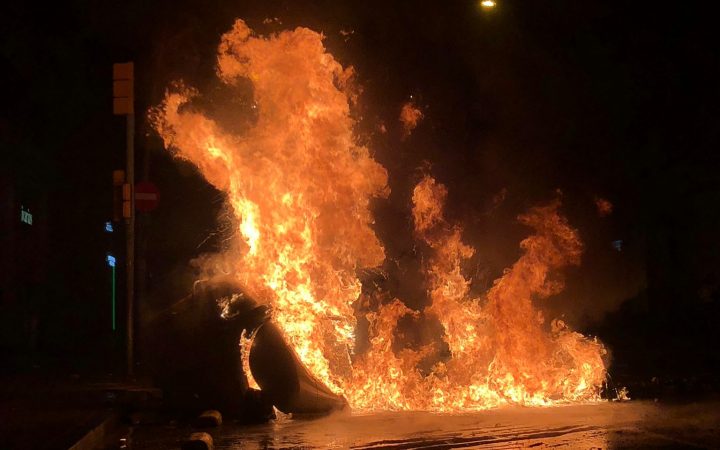 A burning dumpster at the Barcelona protests [Courtesy of Maikhel Luna]

Marta, 21, a journalism student who took part in the protests, says they “don’t advocate violence, but it’s the only way we have to be heard”, said defending their practices. “They didn’t let us vote in the referendum for independence, then they sent our politicians to prison, and now they are doing it to a rapper. The repression of the state is endless,” Marta added.

In Catalonia, discontent is heightened by pro-independence supporters, who have seen their attempts to achieve independence thwarted in recent years and the state repression of their political leaders. Demonstrators come from a wide range of left-wing backgrounds. There is no leading organisation, but many platforms with different political ideas, from anarchists to pro-independence and anti-fascists.

Influencer Juliana Canet argued their means are justified because the structural violence that young people suffer is much stronger. “Evictions for rent arrears take place every week, homelessness is on the rise, dozens of sexist crimes every year. This is much more violent than burning a dumpster,” she said.

Several studies have found that violent protests have faced a backlash; the protesting group have lost credibility, and the public identified less with them.

Protests in Barcelona are expected to continue despite the government’s announcement that the police will act more forcefully if riots do not stop.

The imprisonment of rapper Pablo Hasel has not only made his content reach many more people, but he is now the voice of thousands of young people frustrated with the system.

They have so little to lose that they are determined to continue protesting until they are heard, not in court or behind bars but in parliament.

By Taysan Ali-Osman
8 Mins read
We profile up-and-coming rapper V.I.C on his success and where he plans to move forward with his music in the near future.
AudioNews

By Rebecca Keen
2 Mins read
An article about the Stop the Oil protestors who caused distribution on the M25.
Music

By Zeina Saleh
5 Mins read
She may be one of Egypt’s only female rappers but Felukah is currently dominating the hip-hop industry.