The art of escapism is something we have all been trying to master this past year, whether it be through knitting, baking or reading.

For some, binge watching box sets is their chosen form of escapism. Tiger King, Emily in Paris and The Crown are a few that come to mind. However, one that took Generation Z particularly by storm was the Netflix original series, Bridgerton.

Based on the books The Bridgerton Series, by Julia Quinn, producer Shonda Rhimes and director Julie Anne Robinson brought the series to life late last year.

Bridgerton is set during the Regency era in England, where eight close-knit siblings of the powerful Bridgerton family attempt to find love. Elements such as the diverse cast, gorgeous gowns and cottage-core aesthetics could definitely explain the reason why TikTok was flooded with Bridgerton related uploads. But more significantly, the time in which it was released and the desperation of the nation, points towards the escapism element.

We spoke to Lily Spencer,a self-confessed Bridgerton fanatic, to try and truly understand the craze behind it: “So much of what we watch today is current news, current politics, wrapped up in current societal issues, so to watch something which is so removed from our daily lives is just so nice especially in lockdown.”

With the pandemic continuing over the winter months and with no real end in sight, a study conducted by Office for National Statistics found that: “Almost two thirds (63%) of students reported that their well-being and mental health had worsened since the autumn term, broadly unchanged since January.”

[pullquote align=”right”]“It’s so long ago and it’s far enough in the past, we are able to distance ourselves from the bad.”[/pullquote]So when we want to escape, but there is nowhere to escape to, we transport ourselves back to a time we can hardly relate to today. Gut-cinching corsets, rag-curled hair and glamorous balls every other night, something no-one alive today can tell us stories about.

Obviously, Bridgerton is fictional and history books show the true and often not so attractive side of the Regency era. The reality is that women lived very controlled lives, something we have fought against for many years and continue to fight against to this day.

Meanwhile men slept in late, hunted, drank and ate to their heart’s content. Women’s days were long and boring and if they showed the slightest bit of discontent or disobedience, they were punished and locked up in the house all day.

The romanticisation of this time almost feels wrong and underwhelms the behaviour towards women at the time. According to Charlotte Betts, a historical novelist: “Today women take it for granted that we have the freedom to speak our minds, own property, marry for love, have a career and gain custody of our children, but this wasn’t always the case for our female forebears.”

Beauty standards in the Regency era were defined by cinched waists, pale skin and fuller figures. These standards are not totally different to today. With the likes of Kim Kardashian and her shapewear line Skims, women today are still trying to achieve that drastic hourglass figure. Through wafer thin, skin-coloured underwear, Kim Kardashian is promising the results of her own figure to other women, which we all know is an unrealistic body ideal. 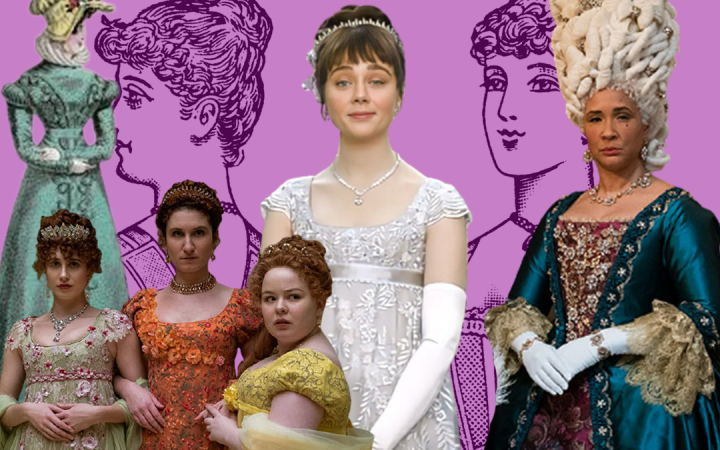 According to social shopping service, Like To Know It, searches for corsets have increased by more than 100% since Netflix’s Bridgerton aired, while data from eBay shows that 39% more of us are in the market for a vintage piece inspired by the series, too.

Another aspect that seems to have morphed into the 21st century is “courting”, particularly through the form of reality shows such as Love Island and First Dates.

Of course, women have more of a say about their love lives now, but even rewatching episodes from as recently as 2010, men still had more of the power in deciding who they want to pick in a line-up of women. It seems the position women take in relationships, still bears some similarities to the past.

Sophie Kilminster, for the Oxford Student online, challenged sexism within the hit show, Love Island, saying: “What seems overwhelmingly obvious to me is that women, starting with those in the villa and applied more generally to the female sex, are being blamed and held accountable for how men mistreat them.” So, when watching Bridgerton, are we really looking at something so far from home?

Another aspect that does not sit quite right, is the dismissal of race. If Bridgerton was really set in 1813, an overtly racist society, and themes such as sexism and equality were mentioned, race definitely should have been highlighted too. The three Black characters with the most amount of screen time are the male lead Simon (Regé-Jean Page), Lady Dansbury (Adjoa Andoh) and Marina Thompson (Ruby Barker).

Vague race references were made at points within dialogue such as, “us” and “them” and then is practically ignored for almost the entire show. Arguably, some might say it is refreshing to see a past where such racism did not exist, however for this to have been effective, race would not have been mentioned at all. This is something that deserved the same recognition as gender roles, particularly in a time when such issues are still poignant.

As The Observer critic Carolyn Hinds pointed out, the show does mention slavery at many points but it does not follow through consistently with the rest of the series. “You can’t say race isn’t of consequence when the world these characters inhabit was created in part through racism,” Hinds explained.

Hinds went on to say: “It’s disingenuous to say their race doesn’t matter in this world, when the most prominent and numerous people are white. If race truly didn’t matter, there would be an equal number of Black, Asian, Middle Eastern, Latinx etc. and white people represented in the show.”

To see the show gain so much popularity with younger generations does not sit right with me. Perhaps it is because romanticising a time, that caused so many issues still present today, feels like one too many steps in the wrong direction.

So, is Bridgerton really a form of escapism?