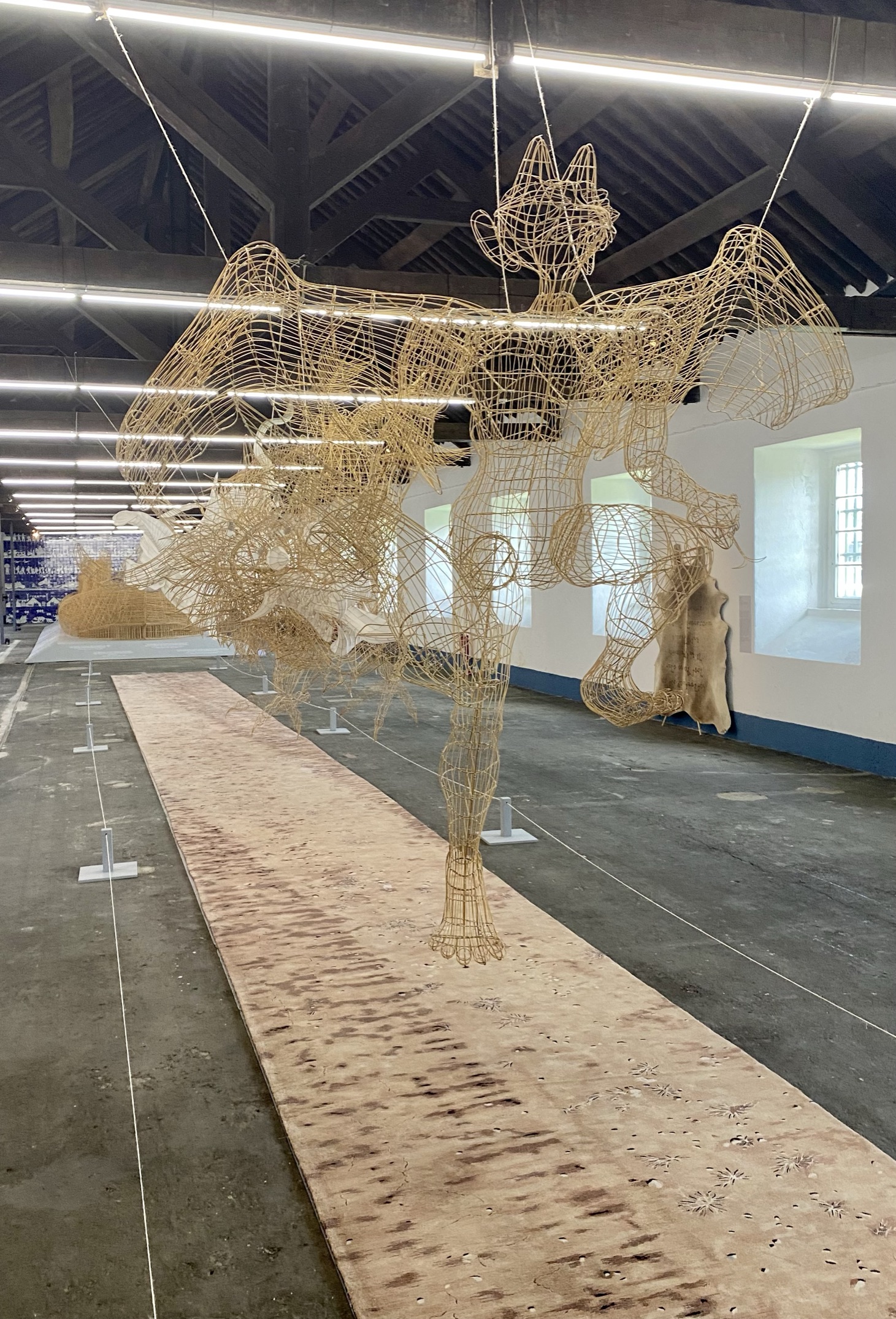 Lyfe Cycle series, made from Bamboo [J A Neto]

Although he is better known as the dissident Chinese contemporary artist, Ai Weiwei has always worked as a political activist, architect and filmmaker, demonstrating his versatility in the creative fields over many years.

Throughout the last decade, his artworks have portrayed many of his personal struggles with the Chinese state.

From being abducted, incarcerated and having his passport confiscated to witness the demolition of his studio after having already search for refuge, first in Germany then in the UK for a short period.

Weiwei’s work has also been influenced by the adversities he faced since he was born and throughout his early childhood during and after his father exile, in which his only crime was to be a poet, in the wrong place and at the wrong time. 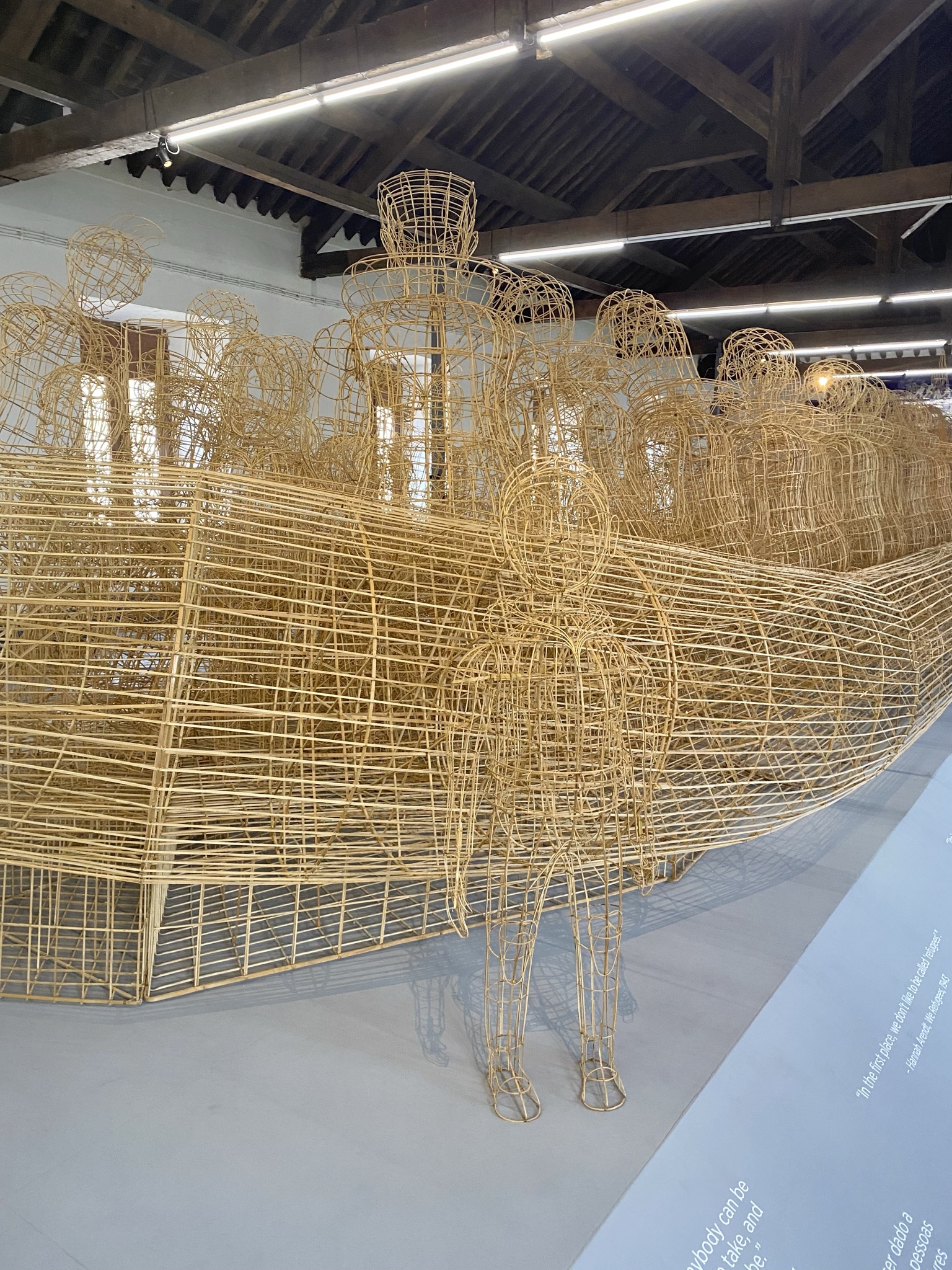 Large-scale boat and human figures part of the Lyfe Cycle series, made from Bamboo [J A Neto]

A period when China entered a particularly turbulent moment in history with the Great Tangshan earthquake of 1976. Since then, Ai Weiwei’s unique work has been internationally acclaimed, and the artist shows no signs of slowing down, continuing to amaze his audiences.

This latest exhibition explores the multiple meanings of “rapture” in English. It is designed to present two creative dimensions of Ai Weiwei’s artworks, with more than 85 small and medium installations, sculptures, documentaries, and photographs. In contrast, one side displays a fantasy narrative, whilst the other explores socio-political and environmental themes.

If you are visiting, it is advised that you take your time while visiting, as there is a lot to learn and reflect on. Through creativity and an immersive experience, Rapture highlights a dark reality that still exists worldwide.

As he often did during his career, through his writings, movies, designs and architectural collaborations, Ai Weiwei aims to tell us his story and bring attention to humanitarian catastrophes and injustice — with the aim of helping people on a global scale. Everywhere he goes with his exhibitions is like a new opportunity to him.

He shares his knowledge and life story while simultaneously embracing each new country. Learning about its art, practices, struggles, injustices, deforestation, animal welfare, refugees needs, and the list goes on and on. 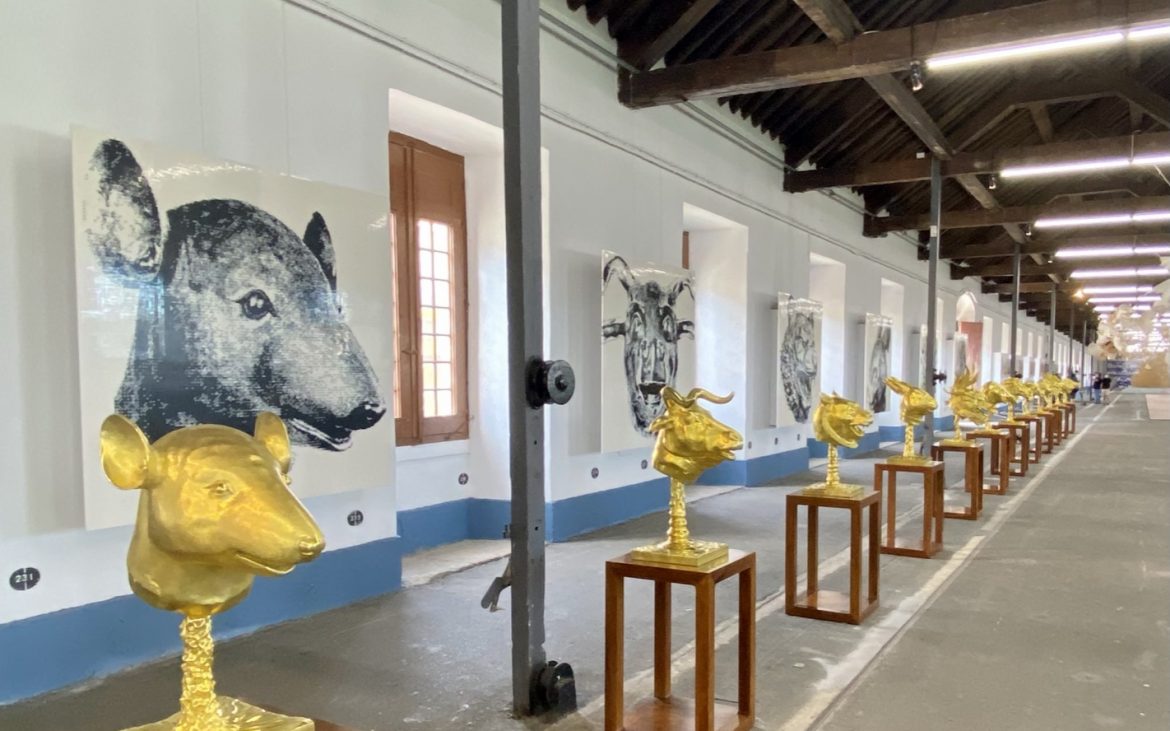 View of Circle of Animals/Zodiac Heads [J A Neto]

It is like he must do something to help, and immediately a new collaborative project emerges — which is soon exposed to his legion of followers and media outlets that continue to show interest in whatever he does.

As said on his website: “Expressing oneself is a part of being human. To be deprived of a voice is to be told you are not a participant in society; ultimately, it is a denial of humanity.” Rapture is, once again, another sizeable example of him expressing his voice. 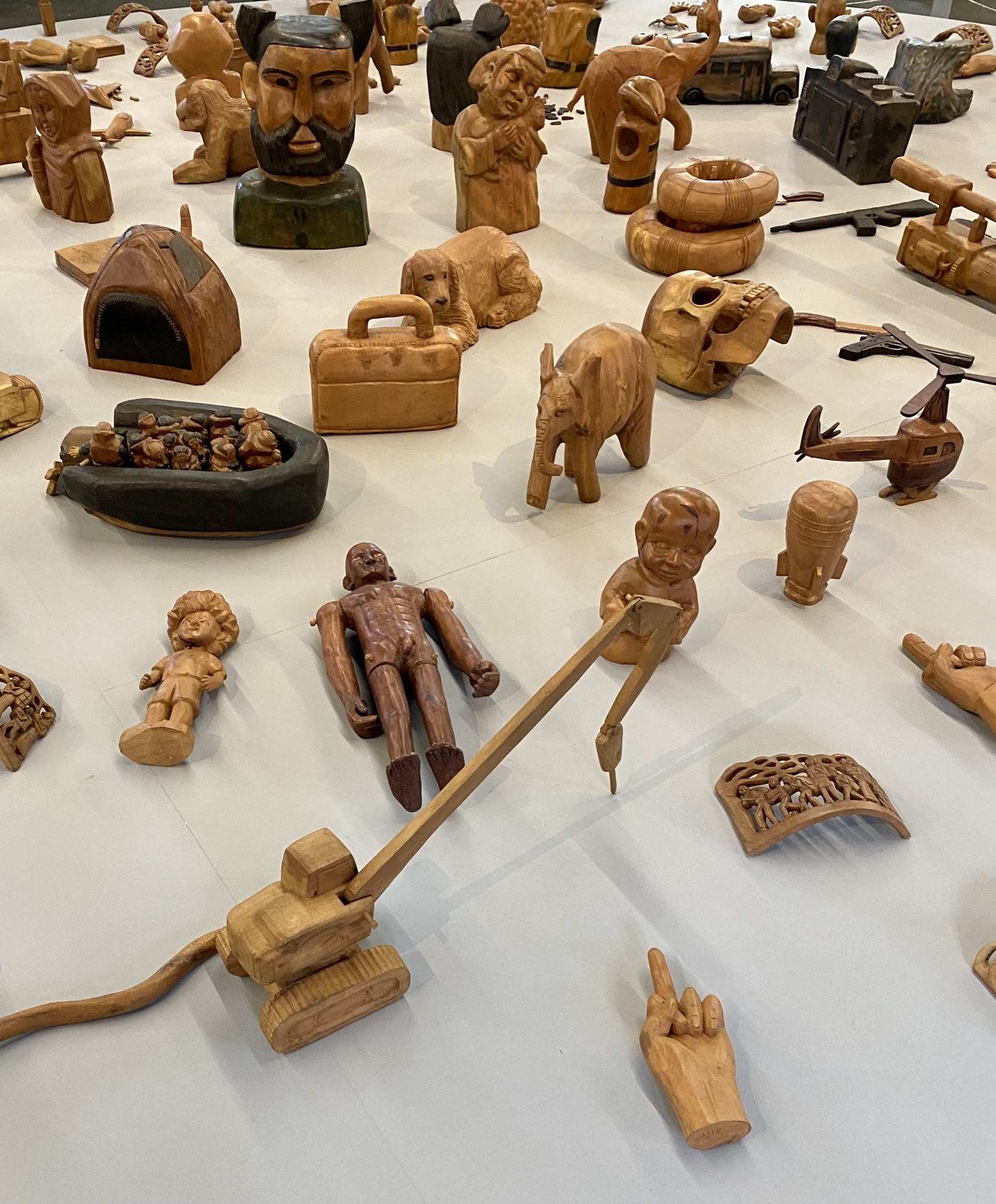 Works from Juazeiro do Norte, made in collaboration with Brazilian artisans [J A Neto]

From the moment we arrive on site, we are welcomed by a massive installation: Forever Bicycles (2015) — crafted out of 960 stainless steel bicycles — in which the artist references Marcel Duchamp’s Bicycle Wheel. Weiwei revisits the object’s symbolism throughout time, from luxury good, to fitness device, and nowadays a sustainable means of transportation.

Instinctively or perhaps because of the grandiose figures lining the floor and ceiling, I first turned to the right side of the exhibition that leads us into the exhibition’s fantasy side.

My eyes were immediately attracted by Refraction, a large-scale installation, made out of solar cookers, kettles and chunks of steel, moulded in the shape of a wing. It was first presented within @Large on Alcatraz in San Francisco (2014).

Next up are the imposing yet fragile figures from the Life Cycle series, made from bamboo using an ancient Chinese technique, produced at Weifang in Shandong Province (works from 2014, 2016 and 2018).

Many of these figures are hung over a 45 metre-long wool carpet, Tank Print (2014); it was woven using the photographed pattern of the marks left by the tanks used to suppress the Tiananmen Square protests in Beijing in 1989.

Followed by the shining gold shapes displayed on wood stands carefully aligned, the Zodiac Heads (2010) are a series of bronze and gold-plated headings re-envisioning the twelve animals of the Chinese Zodiac in contrast with the smaller series Works from Juazeiro do Norte, a collection of wood carvings from a specific region in Brazil, made in collaboration with local artisans (2018). 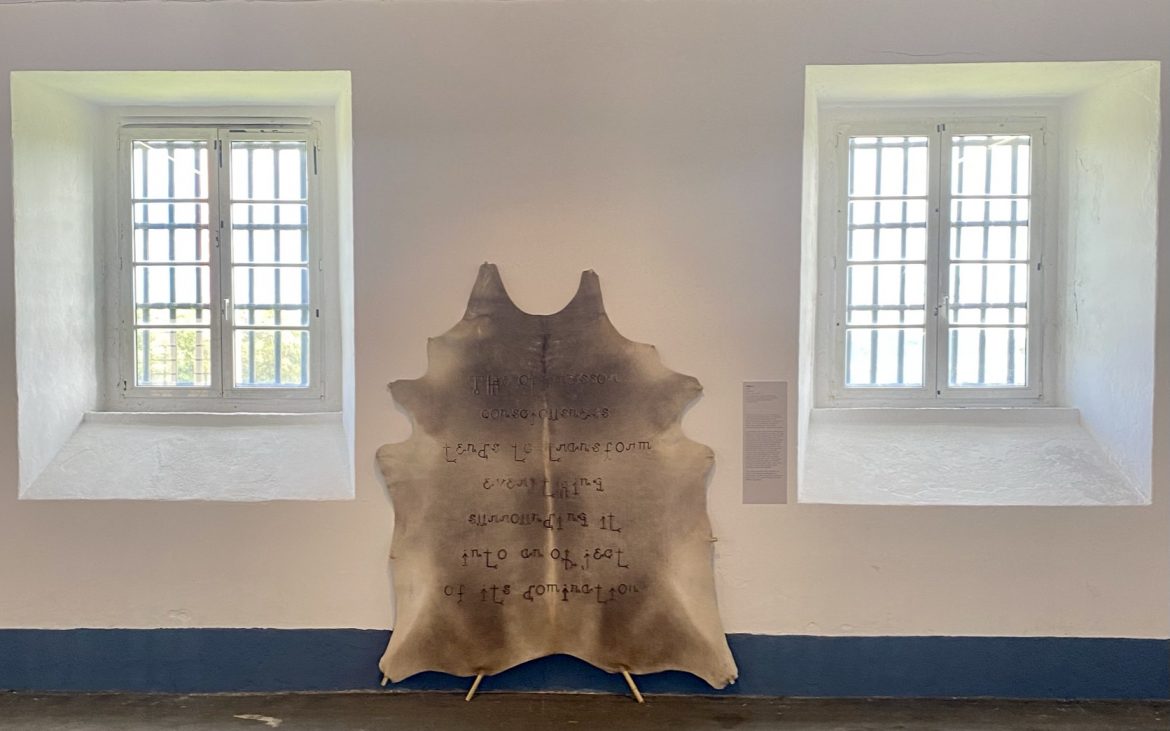 We can then see a few pieces from the Brands set (2018), crafted from branded leather — representing just how many farmers still mark their herd, as was done with human slaves in the past. The works are imprinted with quotes from Brazilian’s intellectuals and songwriters using the Armorial Alphabet. 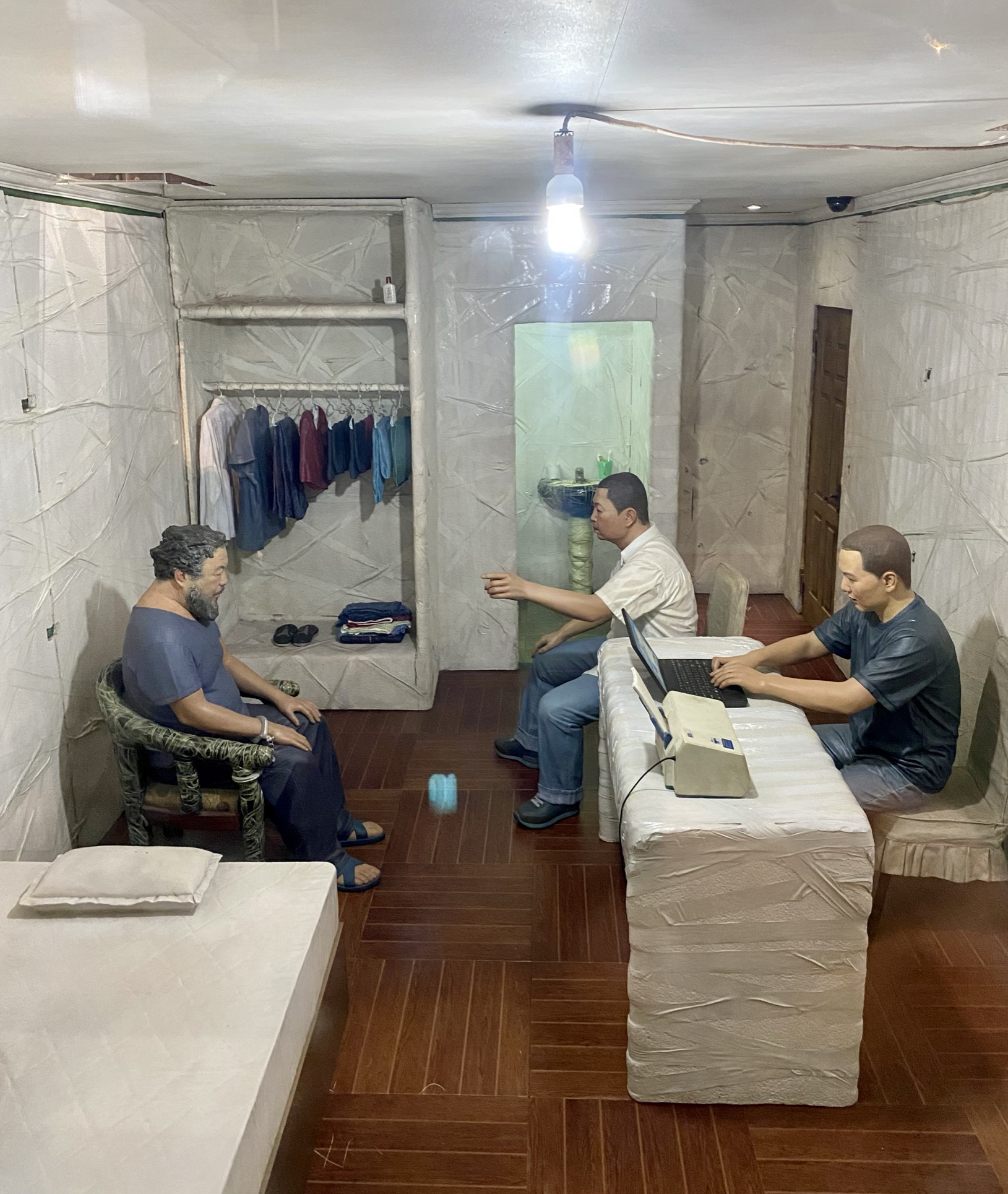 S.A.C.R.E.D. box series, made in Fiber Glass encased in iron [J A Neto]

On the left side of the exhibition, there is again a vast range of artworks that continue to fascinate, all of them impressive in their own ways. Like Law of the Journey (Prototype B) (2016), a 16-metre-long inflatable boat with human-like figures crafted in reinforced PVC, inspired by his visit at the Greek Isle of Lesvos — which later took him to a new journey to retract the refugee’s problems, shown on his documentary Human Flow (2017) after he travelled to 23 countries visiting 40 refugee camps.

Another impressive one was S.A.C.R.E.D. (2011-2013), a series of six boxes made of fibreglass, encased in iron, named Supper, Accusers, Cleansing, Ritual, Entropy, and Doubt recreate moments and emotions endured during his 81 days of imprisonment. A period in which he was constantly interrogated under twenty-four hour surveillance followed by two officers, including during his sleep, toilet breaks and meal times. 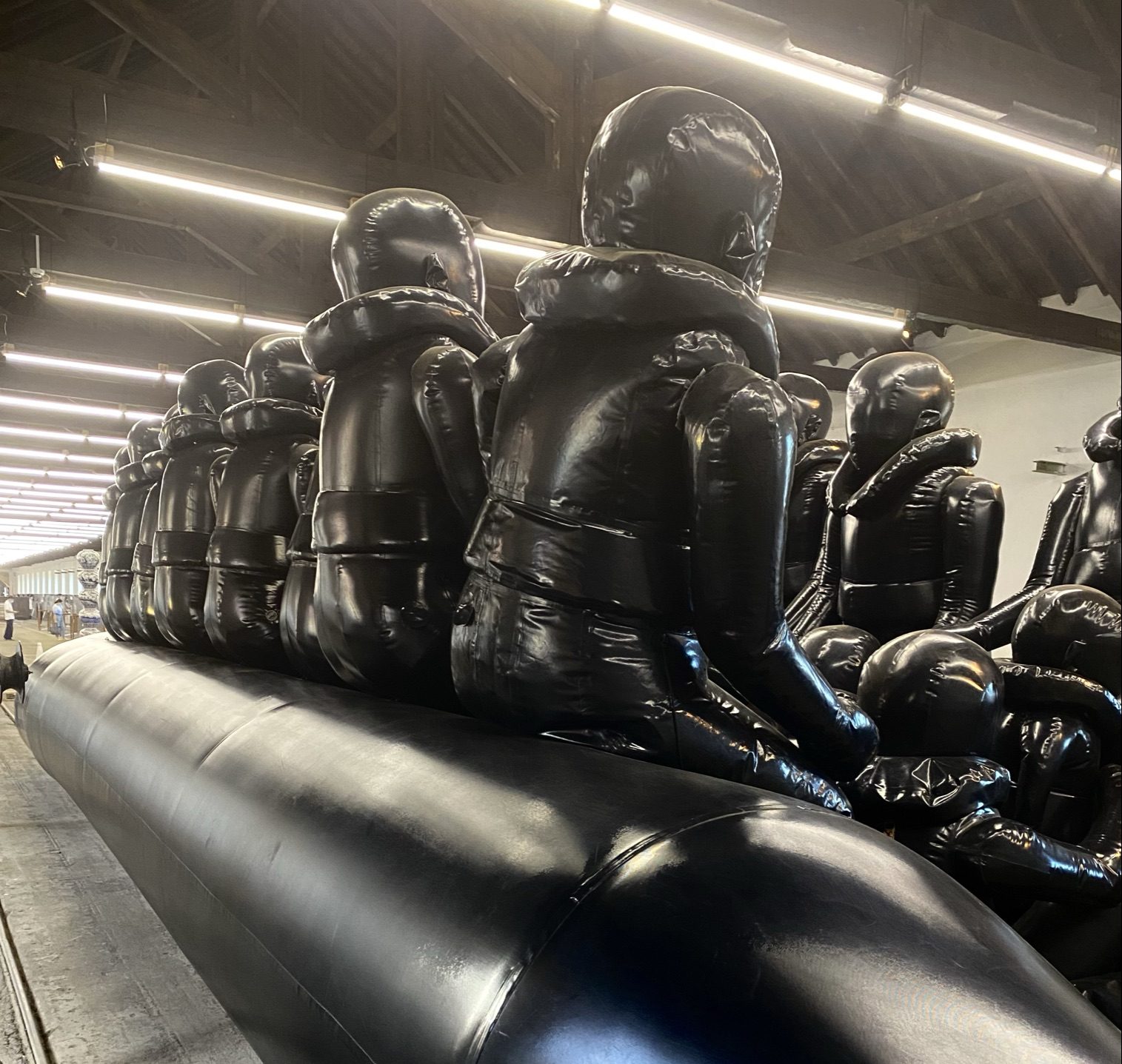 Law of the Journey series, a boat with 51 human figures in reinforced PVC [J A Neto]

We then encounter one of my favourite artworks, Brainless Figure in Cork (2021), a self-portrait sculpture, which was produced by Corticeira Amorim, using a CNC machine, and finished by a cork-experienced sculptor.

It is not by chance that Ai Weiwei receives such attention. Throughout his long and productive trajectory in the art world, he is always open to new opportunities and willing to talk about his experience with people from many fields.

He can quickly be talking to Edward Snowden about dissidence, exile, and how to fight for truth from afar, or discussing freedom of expression at the English Pen 100 festival, or yet talking about art at one of several Frieze Art Fairs talks. He seems never to refuse any invitation. 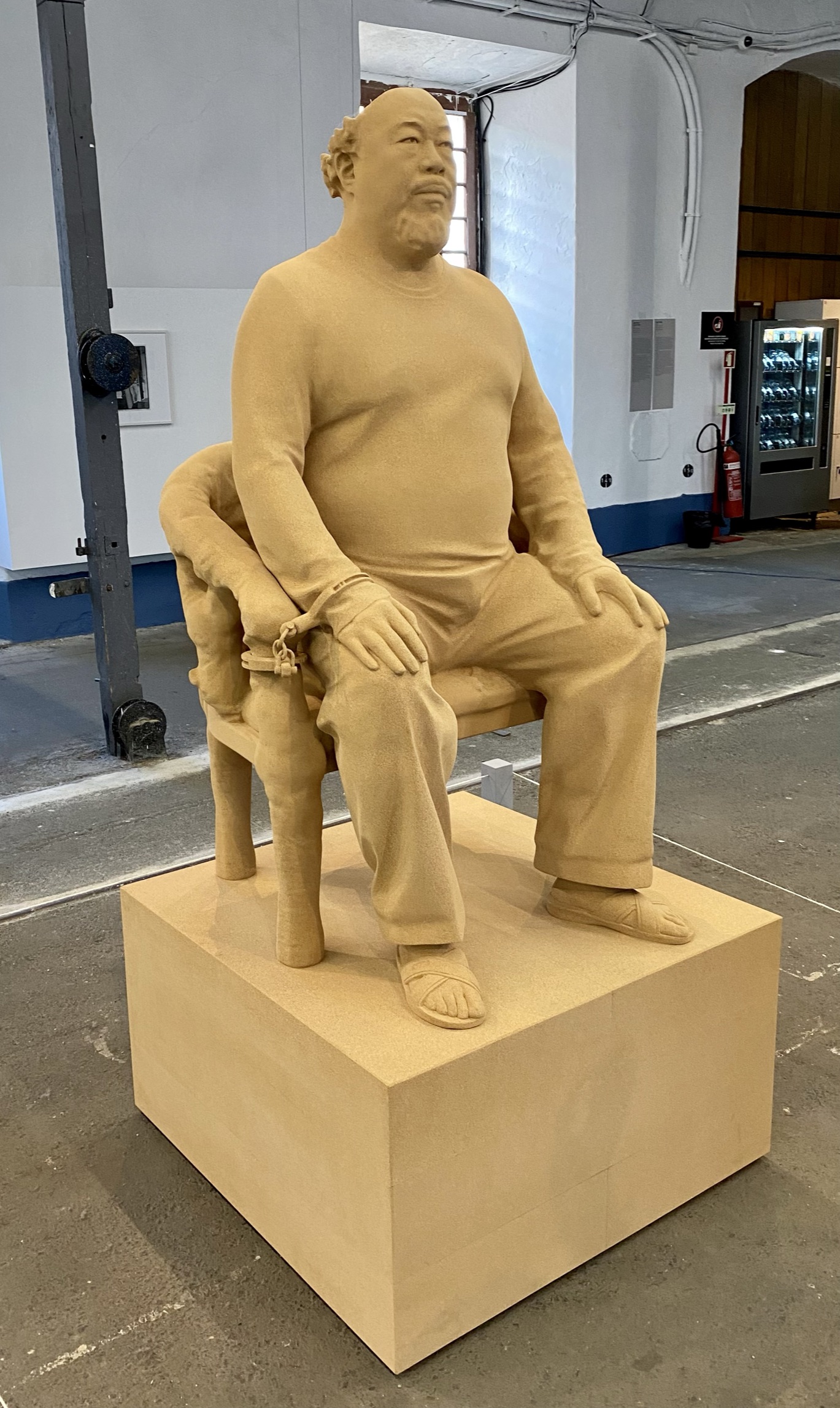 Currently living in Portugal, Weiwei has embraced the boom of Zoom interviews, but one must always check where he is talking from because he can be anywhere in the world working on a new idea.

As he said recently in a Wallpaper interview: “With every opportunity that comes, I say to myself, ‘this will be my last show’. So, I always make maximum effort because, who knows, I could be locked up in jail for the next ten years. Whether it’s a large project, or a small project, it’s the same feeling. Life is short.”

With his artworks, no matter in which medium, he challenges and confronts the viewers to think about social justice issues and the inhuman conditions occurring in many places around the world.

Conditions which we often overlook, too busy to see it or consciously deciding not to act. Weiwei’s work makes us ask ourselves: Could we do anything to improve these situations?

Ai Weiwei has made the most of the pandemic period, as we can see from the results of many different projects in the past two years. At the time of writing, he is currently launching a memoir called 1,000 Years of Joys and Sorrows, participating in a project launched by CIRCA in the UK, in collaboration with Marina Abramović and many other international artists, preparing a new show for Vienna in 2022, and possibly some another secret project.

We only need to wait for his following headline to find out more.

Portugal is now home to the AI Weiwei’s Rapture exhibition is open to visitors until November 28, 2021, at the Cordoaria Nacional in Lisbon.