Staff and students from the University of the Arts London (UAL) have taken part in a Parade for Climate Justice to demonstrate how the creative arts can make a difference in today’s climate emergency.

The event was part of UAL’s Carnival of Crisis, a two-week event that aligned with the COP26 summit in Glasgow. 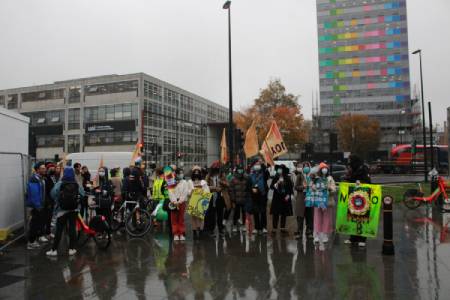 According to UAL’s website, the event aimed to demonstrate that “the arts can – and must – respond to the climate and ecological emergency.” The demonstrators wanted to address the question of  whether art can inspire change in response to the climate emergency.

“It really is the first time UAL has come together to acknowledge the climate crisis and to express, really importantly, what creativity has to offer to the challenges we face,” said Sarah Temple, one of the organisers of the event.

Sarah portrays her passion for the cause in her answer as to whether the arts can make a difference: “It’s an enormous opportunity to change value systems and change understandings of some of the problems.” 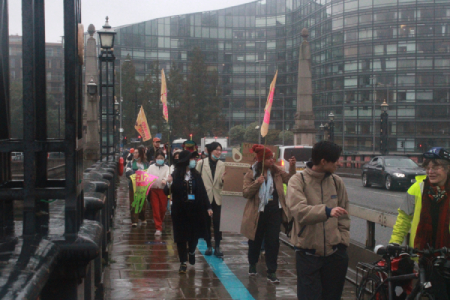 Students were asked to bring whatever they could to demonstrate with. The event saw banners atop bamboo canes with clear message scrawled across them and protesters crying out for change.

The march went over Lambeth Bridge towards the House of Commons. A 50-person garment entitled Nexus Architecture designed by Professor Lucy Orta, UAL’s Chair of Art and Environment, linked protestors outside the government building whilst they marched in solidarity.

The term ‘nexus’ refers to a link or a bond. Orta’s description on her website states: “In this case, symbolic content is more important than functional.”

Orta described the garment as “a channel that’s connected from front to back creating a human body chain. It’s been used for interventions and performances in locations around the world. The Nexus Architecture here today has been customised by the BA Textile Design students here at Chelsea.” 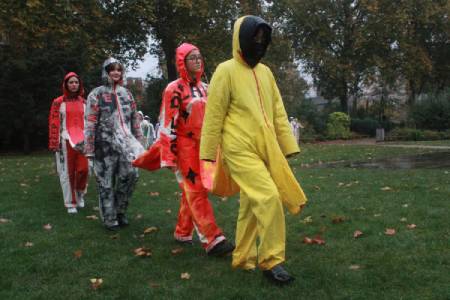 Before coming to London, the Nexus Architecture suits were in Glasgow, the location of COP26, and were customised by students at the Glasgow School of Art.

BA Textile Design lecturer Nicholas Dunn believes the fabric and textiles industry can become more sustainable from teaching upwards: “Everybody has sustainable and circular thinking embedded in every unit, every project that we do.”

Nick said that his course approaches sustainability by “being really mindful of the fabrications that we use, the provenance, the sources. We have a terminology, ‘from ground to fabric’, and getting the students to really think about that. But also, to think about how slow ways of production and traditional ways of producing fabrication can be sustainable.

“We encourage the students to look locally first and then expand. Think what’s around them and how they can create fabric to create new ideas,” which demonstrates how other textile courses can reduce their carbon footprint.

Continuing from Westminster, the protest followed the Thames up to the Chelsea Parade Grounds, where all of UAL’s campuses came together to share how art can make a change.

One group, dressed for the carnival theme appropriately, asked individuals to write down something they felt and wanted to see regarding the climate crisis. A long piece of fabric was being carried through the parade ground to become a work of art.

Martina, from this group, expressed her feelings strongly: “The issue of the media is that they don’t really tell the truth,” pointing to the front of her top which read ‘REFUSE TO BE CONFUSED’. 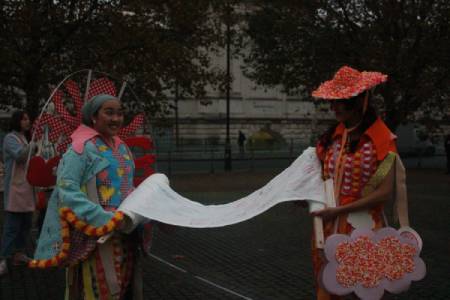 Activists from the Carnival of Crisis [Will Drysdale]

Martina believes that art can make a difference in the fight against climate change: “I think it’s fundamental; when we talk about art, we talk about the zeitgeist of the times. It’s how we express our feelings and inspiration for the future, so I think that they really work well together and, in this case, it’s good to express our feelings. Sometimes you can have a lot of grief in relation to the industry, or around the world, but it is also good to give hope to people, to inspire people to live a better way.”

Professor Helen Storey exhibited her Dress for Our Time display. The dress travelled to Chelsea from Jordan and has been used multiple times for displays and protests over the seven years since its creation.

The garment was once a United Nations High Commission for Refugees (UNHCR) refugee tent that was home to a Syrian family in the Za’tari Camp. It is now a walking piece of art in dress form and has been traversing different parts of the world. Worn by a student for this event but showcased by various others in its time. 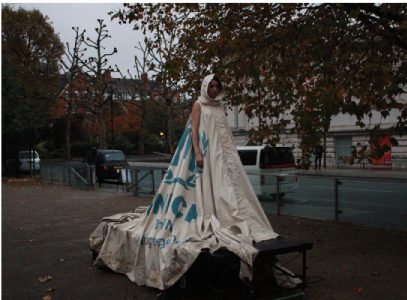 Lucy Orta had a second art display showcase titled Antarctic World Passport. A member of this part of the parade told us: “The mission of this is to essentially show a place with no borders where people can move freely. Antarctica is a representation of that place because it has no flags and no nationalities.” The group encouraged protestors to sign up and receive an Antarctic passport, allowing people to become “citizens of the world.”

We asked them if they believe art can incite real response to the climate emergency: “Absolutely, it can make a difference if it reaches you that way – through art and marching and believing in this, why not?”

“How else could we communicate it?” said another from the group.

Continuing into the evening, there were numerous displays, speeches and performances from the activists and groups.

Speaking to a group of young architects from CSM, they decided to spread growth by creating chandeliers of bio-degradable bags filled with coffee grinds and seeds they had picked up from around campus. They gifted these to protesters for them to use it as fertiliser. And the design had climate change in mind, with the colours of the climate change flag incorporated into it.

Elliott, a student from the architect cohort said: “Art is a medium where we are free to do what we do if we mobilise ourselves to think creatively, and are able to explore different kinds of processes. Since art is quite shocking and emotional, we want to attack people’s emotions and change people’s minds about climate change, to be a better society.”

In the eyes of these protesters, professors, students, alumni and non-affiliated individuals, they all shared the same answer to our question – can art make a difference in the climate emergency?

It was an emphatic “Yes.”