When you sit in your next car, there has to be an emotional connection. After all, it’s where you’ll spend most of your time, after work and at home.

Finding your emotional centre in a car is key to understanding what moves you to buy a car. For me, the heart of a car is the boot. I know it sounds weird. But, ever since I was little, if my Dad brought home a new car, I would inexplicably disappear and after a few hours he’d always find me in the boot.

I wasn’t hiding, I just loved being in there. The smell, opening all the little compartments and exploring a new space – there was something comforting about it. I know it’s an odd place to be drawn to, but that’s where my passion for cars was born all those years ago, in the boot of an Audi S4.

When I opened the boot of the Macan, I was transported right back to being that little oddball seven year old. I reckon a conservative six or an uncomfortable eight of the present-day me could squeeze in there.

Although I’m not sure that’s a particularly useful unit of measure. In reality, you could fit at least three big suitcases, with hand luggage on either side. 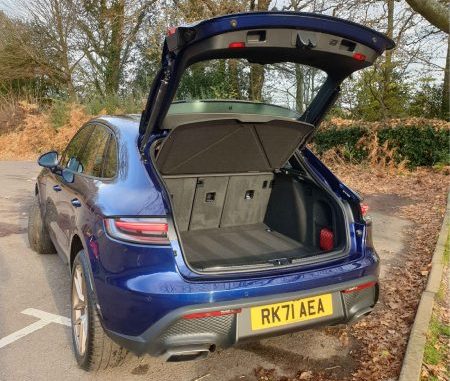 Satisfyingly, even with keyless entry, you’re still obliged to stick the key in its own dedicated slot and turn it to start the ignition. All too often, a keyless start means sacrificing a cup holder to store your keys and unfortunately, my morning coffee comes first so I’m glad the Macan doesn’t make you choose which is most important (coffee wins, every time). I like that the Macan retains this feature, even if it wasn’t mechanically necessary, it just feels right.

So what’s the Macan like on the road? I was a little disappointed that the Macan didn’t demand to be driven recklessly in the same way as say a BMW does. Instead, it offers a calm and cosseting ride and is quietly capable of getting past a lorry on the motorway or overtaking a cyclist.

Getting up to speed is no problem, in fact, it’s easy to overshoot the speed limit without even realising _ that’s not to say the Macan isn’t fun to drive, throw it in sport mode and switch over to the flappy paddles, and you can really push it to its limits. The Macan S or the GTS will have a sportier driving experience though if this is one of your main priorities.

At slower speeds driving around town, the Macan is effortless, the steering feels responsive and there’s little to no road noise. The overall experience behind the wheel is relaxing and even in traffic, it’s difficult to feel stressed situated in the luxury only a Porsche can offer.

There is a little lag off the mark, but that seems to be a symptom of an automatic gearbox rather than a failing of the Macan itself. This should be a thing of the past with the next generation of Macan set to be released in 2023 as an all-electric incarnation. The petrol line-up will run alongside the EV Macan until the demand for the electric model takes over.

The idea of owning a sports SUV is infinitely more appealing once you drive one. It’s a gap in the market that’s been filled extremely well in the form of the Porsche Macan. The ride height is spot on, it’s the perfect place between a saloon and an SUV.

Its unique size means the Macan has the practicality and authority on the road that you’d expect to find in an SUV all whilst handling like a much smaller car. It doesn’t feel huge or unmanageable to drive and even though it feels like a sporty coupe inside, the extra height gives you good all-round visibility.

Inside, the centre console has been reimagined for this generation, with an all-new modern glass look gearstick surround which houses the controls for the heated seats and driving modes. 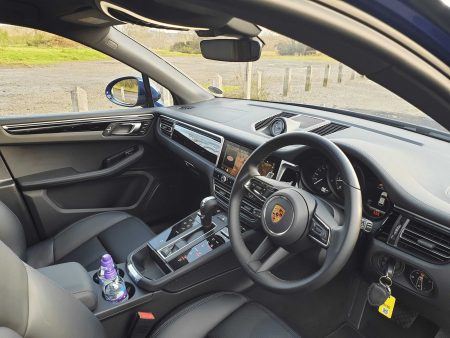 While it looks impressive, sadly the panel quickly smudges and the buttons are more than a little distracting to find when driving. It helps that there are still physical switches for the climate control and volume, but the touch-sensitive buttons right next to these dials, often end up being tapped accidentally due to their sensitivity and ill placement.

The infotainment system has an impressive 10.9 inch HD screen, although it takes a bit of getting used to if you’ve not familiar with the Porsche interface, it’s easy enough once you get to grips with it. The dash also has its own little dedicated screen for the sat nav and car info.

In the back, there’s room enough for two adults or three on shorter journeys. Alternatively, kids and car seats will fit in no problem. The height of the Macan means no bending down to do the kids’ seat belts, but they’re also not a million miles off the ground like your usual SUV either. There’s a pair of cup holders hidden behind the centre seat, and the seats fold down if you need to fit bigger items in the boot (or another three to four of me comfortably).

It took me a little while to work out how to pop the boot, as the button has been craftly tucked away at the base of the rear wiper. Even though it’s not very obvious, that’s actually the charm. It’s an elegant solution to disguise the boot release without interrupting the sleek lines on the rear of the car. The electric boot close button on the inside isn’t quite as hidden away, thankfully.

The Macan ticks a lot of boxes, if you’re looking for a family car that’s still enjoyable to drive, then the Macan fits the bill. It’s not outstanding when it comes to running costs and there are plenty of family cars that are much cheaper to buy, but the Porsche badge means the Macan is always a good quality pick that oozes curb appeal.

If the driving experience is more important to you, then it would be worth looking at an S or GTS if your budget allows.

Featured image by Trinity Francis.
Edited by J A Neto and Aman Hafiz