In an effort to make high culture accessible – and profitable – for a younger generation, many museums, theatres and companies have taken it upon themselves to democratise what was once solely entrusted to grand rooms and temperature-controlled frames.

Be it the American Ballet Theatre offering a scholarship after seeing a viral video of a young dancer, Rupi Kaur’s made-for-Instagram Milk and Honey, thereby ushering in the advent of instapoets, or any number of TikTokers using the platform to give mini art history lessons. One such Tiktoker is Mary McGilliviray (@_theiconoclass), an art history graduate who’s accumulated more than nine million likes on the platform.

Another particularly popular attempt to make art instagrammable is that of Van Gogh Alive. Or Immersive Van Gogh. Or Beyond Van Gogh: The Immersive Experience. Or any of the myriad of exhibitions taking advantage of the public domain work of the iconic painter. 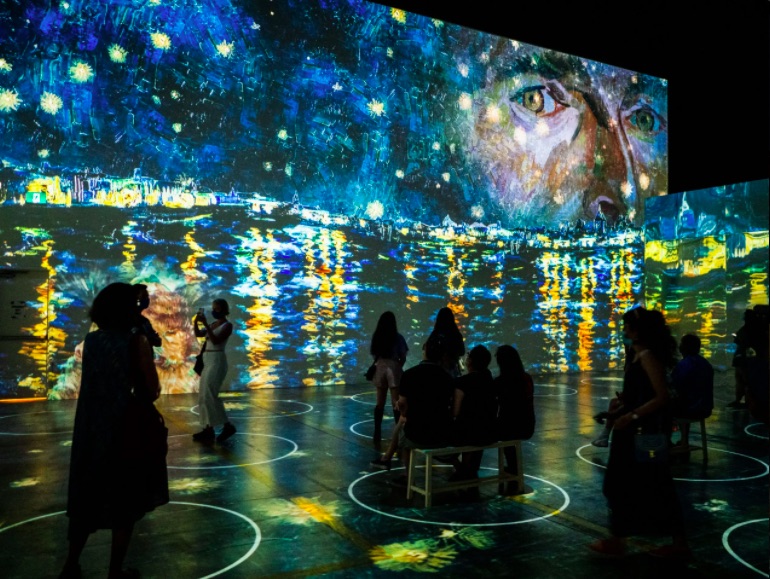 The exhibitions, which saw a surge in popularity after being featured in the hit Netflix show Emily in Paris, feature dozens of projectors emblazoning pop-up warehouse walls with animations of the painter’s most recognisable works.

“All of these companies are working from the same source material — the same Starry Night, the same Sunflowers — that is, Van Gogh’s instantly recognisable, incredibly valuable and, above all, freely available intellectual property,” writes Kriston Capps for Bloomberg CityLab.

“His work falls in the public domain, so the only costs for using his pictures are licensing fees that producers pay museums or photographers for the use of high-resolution images.”

Selling millions of tickets and having record breaking runs for Ticketmaster, the exhibitions have highlighted the desire for interactive, digital-age art shows and inspired many similar efforts to adapt art to the age of social media.

Ellie Makin, a London artist, told us: “I think any form of cultural event or showcase that is photogenic is going to continue popping up by different institutions, because we now live in a world were new exhibitions and up-and-coming artists get shared through social media.”

After the success of the Van Gogh exhibitions, Mexican Geniuses: A Frida and Diego Immersive Experience is set to open in London in Spring 2022. Even restaurants have expanded into instagrammable art, with the Hotel Café Royal offering a Van Gogh-themed afternoon tea.

While the exhibitions are breathing new life into the work of artists and bringing them to millions more people, many of these experiences that seem to be tailored for social media have drawn criticism for being reductive.

One London fine art student, Emma Turpin, says that although “social media helps to bring a sense of accessibility to include more people in the art world, it’s hard to understand the true form of the work through a screen.”

While immersive exhibitions and online content is bringing art to more people, it is diluting the work for commercialisation, a common criticism for the upcoming Frida Kahlo and Diego Rivera exhibition, their work, known for its emotional and violent themes, has effectively been reduced to a photo opportunity.

While there are many criticisms towards this online approach to art, there are also many benefits. “There is something about social media’s effect on the arts that I feel breaks down the elitism of high art … although ultimately, nothing that is meant to be seen physically will transfer to anything online or on a screen,” says Makin.

“I don’t think [on the whole] social media is a valid communication of fine art as you need to experience the work in person. However, social media can offer a glimpse of what you could experience in a gallery, and sometimes explain it,” says Turpin, recommending many users who package art history into small, understandable segments on social media’s new favourite platform, TikTok, which recently overtook Google to become the most popular online site in the world.

Mary McGillivray, who contextualises art in the modern world, argues that “art history is just old memes”, while Evan Hart (@evan.hart) uses their account to frame historical art through a feminist, LGBTQ+ lens.

Dane Nakama (@umeboi) approaches understanding art as simple “visual literacy”: which they say “is the way in which we read images. The only way I can explain it is that we learn how to read poems, we don’t just give someone a play by Shakespeare and expect them to understand it completely. The same goes with art.”

For these users, their social media is about bringing art history directly to a younger, online audience and giving them an ‘in’ to classic and contemporary art that they “may not have had access to because of class or education stereotypes of fine art, and also just not knowing where to look for understandable information,” says Emma.

While exhibitions like the Van Gogh experience could be considered a simplistic, commercial effort to “profit from the on-trend ‘instagrammable’ experiences”, to artists like Emma, it is bringing art to a wider audience and increasing interest in users like McGillivray, Nakama and Hart who are bridging the gap between a social media post of Van Gogh’s Sunflowers and the deeper meaning behind it, opening the high culture topic of art history to a wider, egalitarian audience.

By Raiessa Lin
1 Mins read
This video explores the hidden part of the fashion industry that gets overlooked when talking about ‘fast fashion’. It challenges…
CultureVideo

By Yi Chen
1 Mins read
We talk to an influencer who has more than 63,000 instagram followers about her experiences and how fear of missing out affects her life.