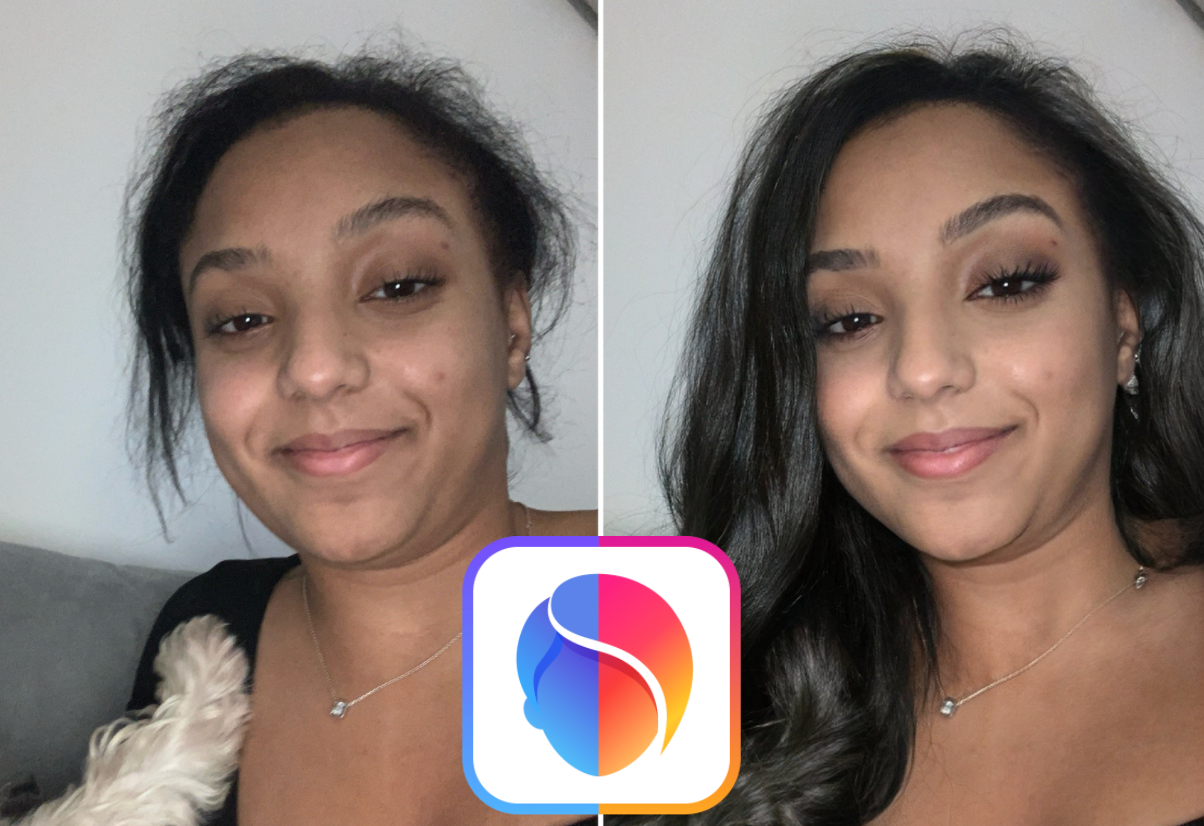 Face App has been trending on social media in recent weeks, as users of both TikTok and Instagram have used their respective platforms to discuss and break down the increased use of filters, editing apps and software to enhance images, often to a scarily unrealistic degree.

TikTokers are now using their three minutes of video time to show how fake social media is by participating in the ‘Instagram vs reality’ challenge.

The app, which is ‘powered by AI’  first came in to popular use in 2019, with its main point of interest being the ability to show users what they’d look like when they were old, by using Face App’s ageing filter.

The craze was so popular that FaceApp skyrocketed to number one on Apple’s UK App Store charts, and celebrities from Lil Nas X to The Jonas Brothers took part in the fun.

By July 2019, FaceApp and other photo editing apps faced privacy controversy, with Face App users worried about the app’s policy of sending photos that have been uploaded to remote servers and retaining them for possible ‘commercial use’.

These concerns raised debate around people’s fear, arguably tinged with xenophobia, about looking the way the app predicted, and downloads began to slide leaving Face App another lockdown fad that everyone soon forgot.

But since late 2021, Face App has yet again become a trending topic, but not for the light-hearted reason it did back in 2019: Instagram and TikTok users have now been using the app to reveal the truth behind these manipulating tools that are often the culprits behind commercial or influencer pictures posted on social media, which are often heavily edited.

Face App has multiple filters that can be added to pictures to completely change the look of the user’s face. Hair can be volumised and coloured, noses made smaller, lips made bigger and eyes are given the ‘cat/fox eye look’.

One filter in particular even adds a realistic layer of makeup to a picture. So I tried it out to see how it would change my face. I used a picture of me with no make up on whatsoever and another of me with makeup on, to see what Face App thinks I could’ve done better. 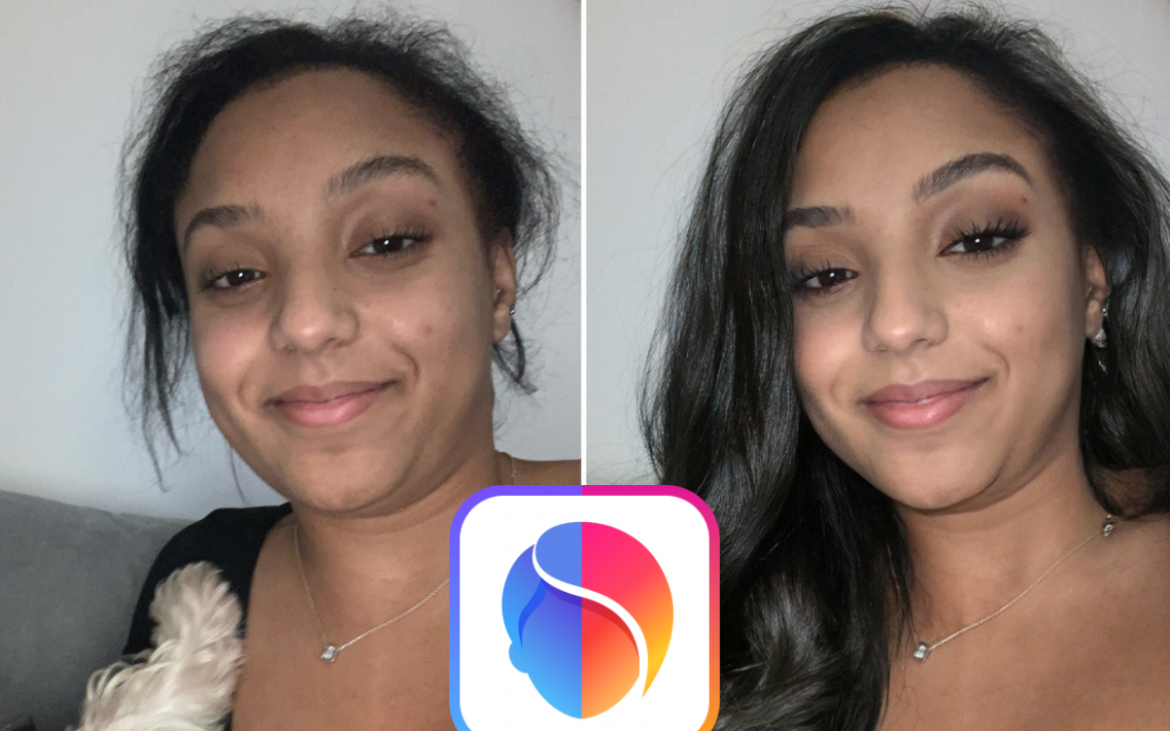 In this first picture, I have nothing on my face and my hair isn’t even done. I look an absolute mess, but after pushing the picture through Face App’s filters, I have long luscious locks, a brighter face, and full coverage make-up on. My neck has been made slightly smaller by the addition of my fake hair and my face has been smoothed out – it’s shame they couldn’t get that pimple scar off my cheek though!

I then tried some of the pre-made sets in Face App’s showcase and the results, which I would have to pay £29 for, were more poignant. 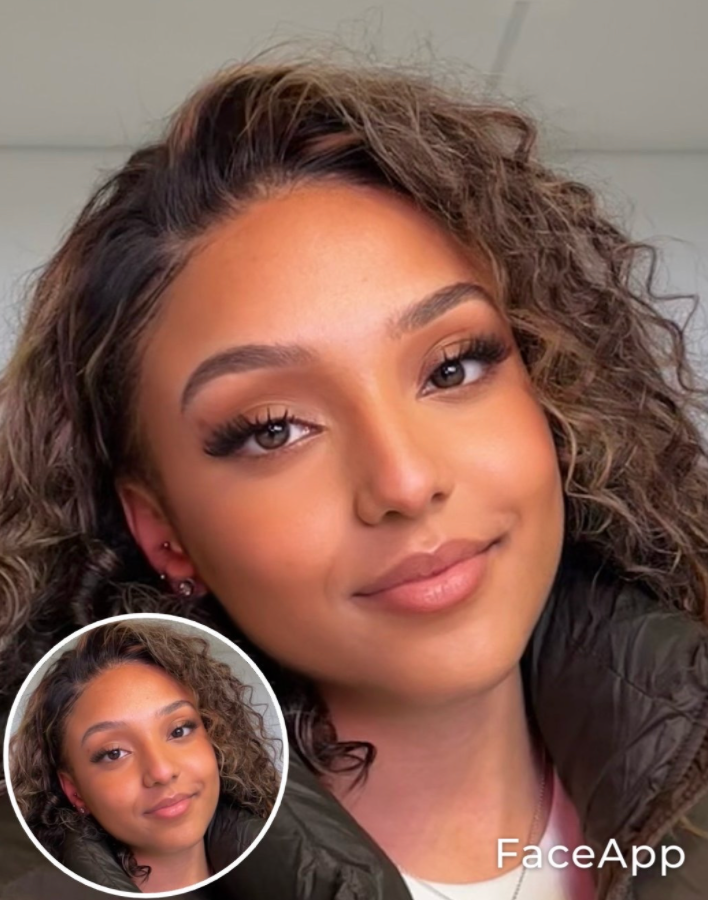 In the original picture, I was already wearing makeup, but Face App instead gave me a full makeover and cosmetic surgery to reveal what they think I should be posting on the ‘gram.

To start, the ‘Star’ filter has made my eyes bigger and has given them the cat-eye look and they appear to be a lighter brown. My eyebrows are fuller and have been filled in. I have been given another layer of eyeshadow and even some highlights in the inner corner of my eye and my lashes are longer and fuller.

Physically, my face is smoother and brighter, my nose is smaller and slimmer and my lips have been hugely plumped, while my chin and jaw have been slightly resized to have more poise and look more structured.

In an article for The Guardian, cosmetic doctor Tijion Esho, founder of the Esho clinics in London and Newcastle, acknowledges the large eyes and pixel-perfect skin that airbrushing filters provide as “an unrealistic, unattainable thing”.

One commenter on the same article gave a photographer’s point of view on the matter, stating that, “a head shot needs to use a minimum of an 85mm, 105mm or 135mm lens to achieve a natural perspective on a face. Most smartphone cameras have an equivalent lens of about 25mm, which accentuate the nose, and push the ears away, making the most photogenic look distorted.”

When discussing the issues filters and editing apps, there’s a lot to breakdown. A striking difference presented by the application of the filters is how they distort my face to make me appear more Caucasian, e.g. by straightening my nose.

These reveal deep-rooted issues within the creators, who have reflected their interpretations of what is considered ‘perfect’ and implemented unconscious racial bias to totally disregard its users of different races and cultural backgrounds.

To go further, the skin lightening aspect of the edits teaches anyone with darker skin that their skin is an imperfection that needs to be fixed, should they wish to fit into Instagram beauty standards.

There’s also a deeper social movement being presented via the app and acts as a look into what the future potentially holds. Through editing and filters, we are quite literally immersing ourselves into a new world where the line between reality and fantasy is seriously blurred.

With so much of our lives centred around our mobile phones, social media and the digital world, our digital self is quickly becoming the version that we prefer to show to the world.

This has been prominent in our society from as early as 2017, when the American Academy of Facial Plastic and Reconstructive Surgery (AAFPRS) found that 55% of facial plastic surgeons say patients have requested cosmetic procedures to look better on social media.

Dr Byrne, who is on the board of the American Academy of Facial Plastic and Reconstructive Surgery, found that patients would point out flaws from a picture or selfie and not a mirror.

This development can be identified under the trend of Snapchat Dysmorphia, a phenomenon that suggests Snapchat users who use filters are getting cosmetic surgery based on how their face looks when edited.

Holly Cockerill is one of the TikTok and Instagram users using her platform to expose the truth behind social media, and how photo editing apps like Face App are more commonly used online than we think.

“I used to post about my skin problems, a lot of people back then were not as honest as they are nowadays so it felt good to show people it’s okay to have flaws. I was so sick and tired of seeing airbrushed pictures all over Instagram which puts pressure on people to try to be ‘perfect’ all the time. It’s so damaging, I used to cry because I didn’t look like these ‘Instagram models’ but I soon realised, they don’t even look like themselves.”

“I got lots of messages from women and even men thanking me for showing my acne and how they feel normal. I realised my content was relatable so I started posting more real images of myself. When I found that more and more Instagram users were using Face App I started posting pictures of the real me next to pictures I’d made with the face app and the difference is ridiculous. The amount of people that said they see the same ‘edited’ face on Instagram is scary.” 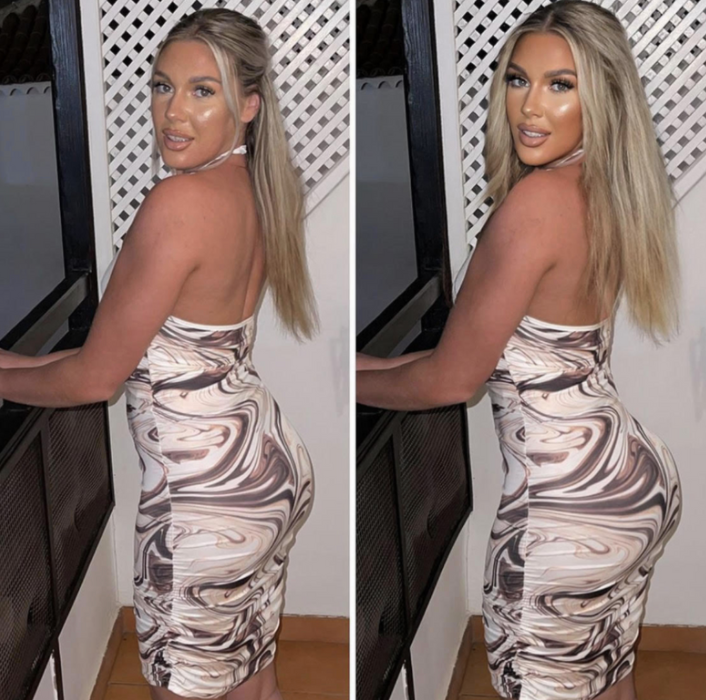 Holly’s genuine approach to an app, which often blurs the line between illusion and reality, garnered a lot of positive attention from like-minded people. Her TikTok video gained 6.2 million views, more than 730k likes and more than 5,000 comments from users, many of whom were flabbergasted by the drastic changes Face App allows people to make.

Although the ‘Instagram vs Reality’ challenge acts as an eye-opener to the illusion of social media, that doesn’t mean people aren’t still heavily editing their images to post to social media networks.

The issue of posting images that have been edited by third-party apps is a tricky one to resolve, but Instagram has found a way to increase transparency for their filter users. When posting filtered images to the profile grid, a tagline states which Instagram filter or effect was used on the posted picture.

Holly’s advice to those starting out on Instagram who feel overwhelmed by the sea of edited images is simple to grasp: “Never ever compare yourself to anybody! It’s easier said than done, but if people spent as much time as they do comparing, and instead use that time to love themselves the world would be a happier place. And don’t believe everything you see on Instagram!”

As Holly says, it’s easier said than done, and my only concern is, as an avid social media user myself who has fallen into the lure of using filters countless times, any barriers Instagram or other social media platforms put in place are often easier to break down than they seem to put up.

I’ve seen many users now point the finger to the creators of their caucasian-ifying filters and question the intensity of them, and since then filters have had less dramatic effects.

However there’s still years of irreparable damage to self-esteem and confidence that filters and face editing apps such as Face App have wreaked on our generation and it should be our responsibility to ensure it doesn’t happen to the next.