Michèle Taylor is a disabled artist and the Director for Change at Ramps on the Moon, a consortium company of some of the UK’s most prolific regional theatres that, since its inception in 2016, has championed the presence of deaf and disabled artists and their stories on our nation’s stages.

Like many access restricted audience members, Taylor is shut out of the community that she’s a part of.

The end of February 2022 saw the British government relax the last remaining COVID restrictions. Whilst many were keen to celebrate a long-last return to ‘normal’ life, for many in our society “what that means is that the world out there is a much more risky place for people who are medically vulnerable,” Taylor says.

“For those of us who are who are just sitting, watching the rest of the world talk about opening up, actually it means that our worlds are closing down. What that means is that my first visit to the theatre has been postponed. I have no idea when that’s going to happen now.” 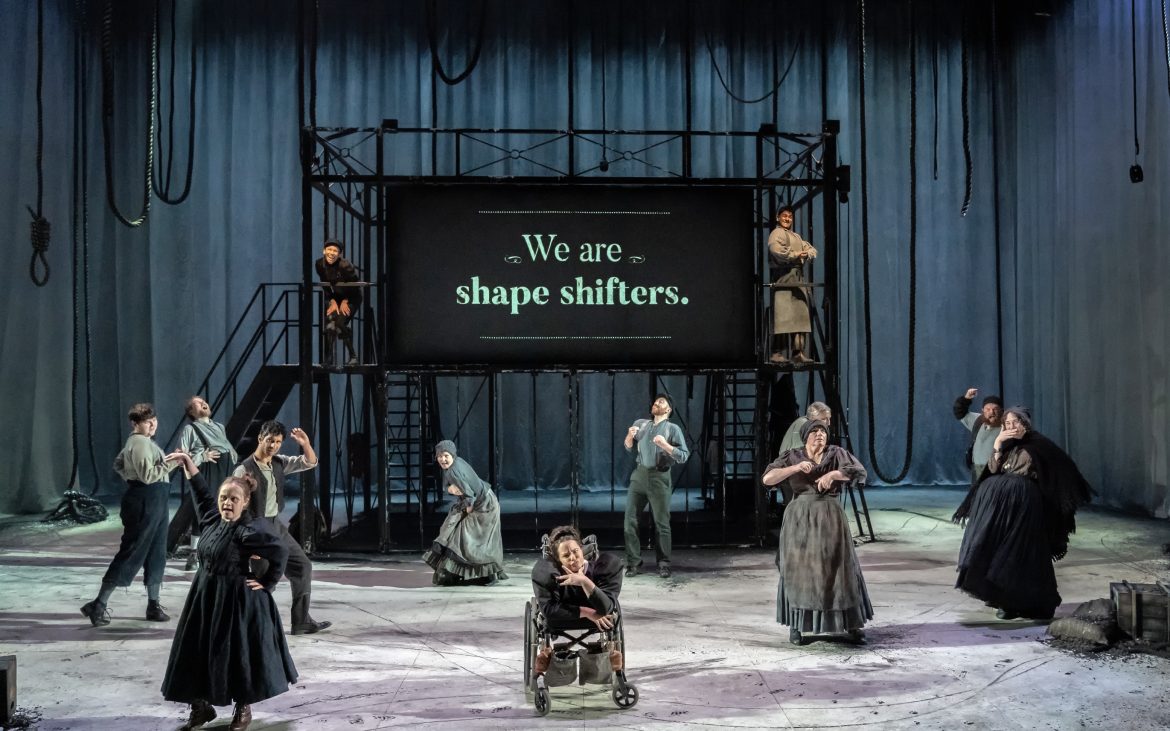 Ramps on the Moon’s production of Oliver Twist [Anthony Robling]

It’s been almost two years since the global spread of COVID-19 practically paralysed the theatre industry. In a sector that has historically existed on the mass gathering of live audiences, the impact of the pandemic couldn’t be understated or quickly forgotten – and theatres around the country found themselves, and remain, in their most perilous position in modern history.

But when the gathering of large groups of people into confined spaces was unthinkable, British theatre took a leap of faith and embraced going digital.

For a time, the digital space became the only medium that allowed our arts venues to actively engage with their audiences.

From the hasty release of archival recordings in the first weeks of quarantine to the advent of theatre produced over Zoom, the majority of 2020 and 2021 saw the arts embrace online in a way never been seen before, accelerating the creation of a new format for theatre that exists outside our physical stages.

Almost unknowingly, digital also led to a quiet but vital revolution in accessibility.

“It just seemed to me like something really significant was changing,” says Richard Misek, an academic at the University of Kent who is currently undertaking research into digital access to arts and culture.

“I think my initial feeling was that just by going online, there’s going to be automatic access and inclusion wins.”

“The world out there is a much more risky place for people who are medically vulnerable.”

In many ways, digital democratised the theatre-going process and as Misek observes, online has the potential to “overcome all sorts of barriers to access – physical barriers, social cultural barriers, psychological barriers.”

Taking theatre out of the confines of its physical spaces and into homes on a wide scale for the first time in history, the arts had the ability to lift constraints that previously marginalised a large proportion of society from physical theatre.

In particular, digital theatre brought significant benefits for d/Deaf, disabled and vulnerable audiences, something that sited theatre venues have often been notoriously restrictive.

Fast-forward to the end of 2021 and a bleaker picture began to emerge. Following the reopening of physical venues in the summer, research carried out by Misek for the project revealed that 50% of UK theatres who offered streaming shows during lockdown reverted to in-person only in the autumn and winter.

Although the benefits of online theatre were clearly shown during the pandemic, the sudden move back to physically-sited and often restricted venues threatened the progress made in providing better access through digital channels, and left many marginalised audience members feeling left behind once more.

Moreover, the digital downfall feels almost wasteful in terms of the development that’s been seen in the format over the past year. The pandemic forced accelerated innovation and creativity into the possibilities of theatre for all, and was making waves on its own terms. 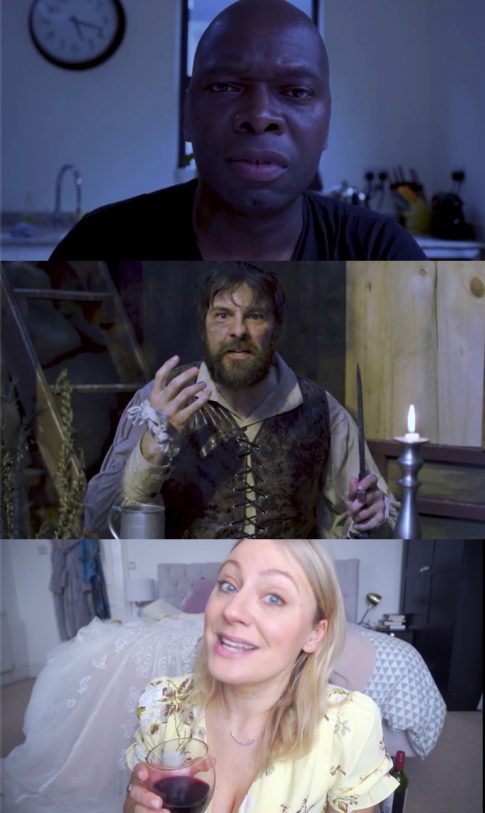 Victor Power in The Moth, Micky Cochrane in Blackmail and Laura Littlewood in Oh, By The Way, I Hate Myself in Elysium Theatre’s The Covid Monologue [Courtesy of Jake Murray]

Jake Murray, artistic director of the North-East based theatre company Elysium described the move online as “transformative.” The company found success through their award-winning series The Covid-19 Monologues, two volumes of new, short, digital native plays released throughout the pandemic on the company’s YouTube channel. The pieces amassed nearly 10,000 views for the small theatre company, raising their profile in the theatre sphere:

“The strength of stage work, that it is live, real, direct and experienced in the moment is also its weakness,” says Murray. “It’s only ever going to reach a limited audience unless you are large scale and on tour or performing in a high-profile venue. A small company like Elysium just doesn’t have that reach. But it does now.”

Likewise, Claire Wood, founder of the Scottish grassroots theatre company Production Lines, also made the transition to digital as a result of the pandemic. Her first online production, shrapnel, which Wood wrote and co-directed, live-streamed to YouTube in November 2020, and explored loneliness through the lens of lockdown.

“That production proved to be a bit of a revelation for me as I realised that even though we were all stranded at home, we could still make theatre,” Wood says.

“I stumbled into digital theatre, initially assuming it was a poor cousin of the real thing. But our first audience was so appreciative, and having done a live show over multiple nights, it was very clearly live theatre and not some sort of weird wannabe film, that I was keen to see how much you could push it.”

Most would agree that exclusivity remains physical theatre’s fatal flaw, and the democratising nature of online work, highlighted by a piece like shrapnel, undoubtedly works in removing these barriers.

Wood recounts how “various friends messaged me over the course of the shows telling me about how much they’d enjoyed being able to watch with a glass of wine in hand and their baby asleep in their lap.”

“As much as I love real life theatre, it’s inevitably exclusive, despite sterling efforts from some theatres to make buildings and ticket prices accessible. I’m really keen to do more to explore how digital theatre can serve as a bridge.”

As Michèle Taylor states, digital theatre succeeds when it exists on its own merits. “Designers and directors can look at digital as an opportunity to think – not necessarily differently – but more broadly, in new ways, in risky ways, in innovative ways, in ways that are actually a creative invitation rather than an access bolt on, then I think that’s really exciting.”

Production Lines’ next productions, roulette and prism, were interactive shows performed live over Zoom, and to Wood endeavoured to be “as close to a ‘choose your own adventure’ book as you can get in the on-screen theatre.”

The productions, through shared audience interaction and experience, attempted to “create that sense of a shared experience that is so fundamental to live theatre. I’m really keen to do more to explore how digital theatre can serve as a bridge.” 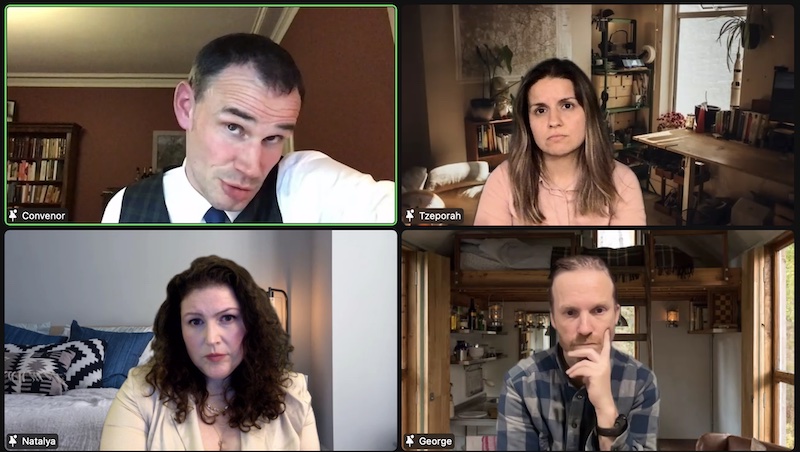 The success of companies like Elysium and Production Lines brilliantly captures the scope of what digital theatre can be when it’s properly embraced, and not, as Taylor points out, “a second hand experience of the live show.”

This was the core belief that also shaped Ramps on the Moon’s filmed production of Oliver Twist. Physically shut down by the first lockdown in March 2020, the company remounted the production in an online version at the end of 2020.

As with all their productions, Ramps on the Moon put together a company made up largely of d/Deaf and disabled actors, with accessibility tools such as BSL (British Sign Language), captions and audio descriptions woven into the direction and design aesthetics of the show.

“That’s the only way in which they’re going to work as a genuine experience,” says Taylor. “Most of the time, what is offered is an accessible journey into a non-accessible show. And that’s not what Ramps on the Moon is about. The filmed version of Oliver Twist does exactly the same thing. It’s not a filmed version of the show. We’re making a film. A digital Oliver Twist.”

Although many argue that digital cannot truly replace the medium of live theatre, it’s undoubtedly provided a significant and worthwhile option.

And option is really the key word here.

But just as theatres regularly offer things like relaxed performances, live BSL interpretations, audio description and captioned performances, digital implemented properly can work as yet another tool in enhancing their accessibility offerings.

As Taylor points out, when lockdown facilitated the acceleration of digital theatre, companies have “clearly shown that they’ve got the tools,” so now it’s a question of how and whether they can be implemented. 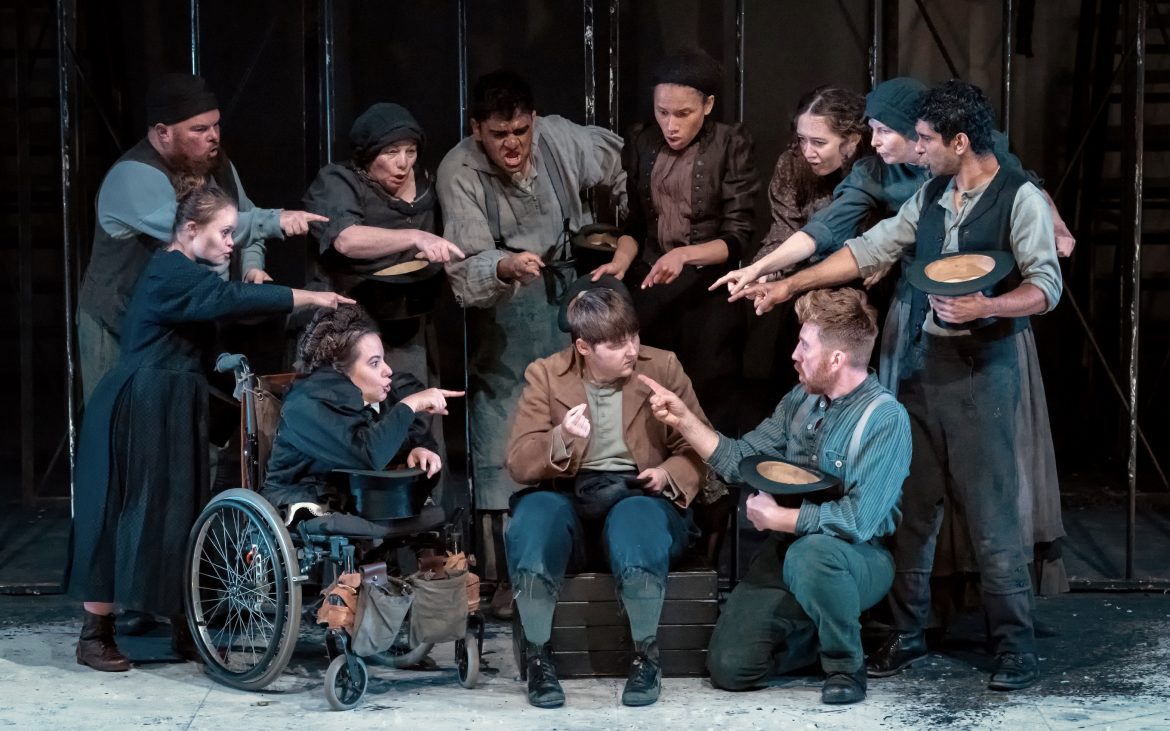 Misek’s research has him confident that the performing arts world see this as an area of exploration, but that “these things take time. Building digital infrastructure is about a ten to fifteen-year project to figure out what works; to build loyal audiences; to increase audiences in cultural sectors that haven’t traditionally engaged with art; to make it economically sustainable. It’s an iterative process.”

As evidenced in a 2011 report by the Department for Culture, Media and Sport, there is “significant association between cultural engagement and subjective happiness”, and the access benefits of digital work cannot and should not be ignored.

Ramps on the Moon, Production Lines and Elysium have all, for various reasons, made a commitment to embracing digital theatre.

On their commitment to digital theatre’s future, Taylor says: “Digital will be a part of the palette of creative tools that directors and designers and writers and theatre makers have at their disposal. It has to be. Otherwise we’re going backwards and we’re ignoring all the lessons that we’ve learned over the last two years. That would be a dreadful shame.”

Ramps on the Moon’s filmed version of Oliver Twist is now streaming on National Theatre at Home. Elysium Theatre’s The Covid Monologues Vol. 3 will be released this summer.