I FaceTime Anna on a sunny Saturday morning. The kind of morning that, in London at least, equals a walk around the park with some fresh bakes from Gail’s. Up until this week, a morning like this would probably equal something similar in Kyiv. Not today though.

Anna, a Ukrainian filmmaker and PR student at London College of Communication, is looking very well put together despite the fact that it’s still rather early, especially given the fact that, as we speak, her family is in a bomb shelter. In Kyiv.

“I haven’t slept since Thursday. The last time I went to sleep, the war has started.”

On February 24, 2022, Europe woke up to a completely new reality: war had come back to the continent. Yet if one looked at the stories of people working in the fashion industry, it was business as usual, especially considering that it was the middle of Milan Fashion Week (MFW).

Backstage at Prada, some models were filming BTS shots, while others, like Ukrainian model Kristy Ponomar, were trying to reach their families whilst their country was being bombed.

Anna knows that feeling well: “There’s no network in the bomb shelters, especially when there’s bombings. On top of that, when my friends and family are just trying to get some sleep, even for 2-3 hours, I’m getting a heart attack, because I’m thinking: that’s it, they’re dead. But no, they’re just not picking up their phones, they’re trying to sleep!”

Meanwhile, the influencers attending MFW shows carried on posting carefully curated pictures of their outfits, throwing in an occasional image of a bombed building, just in case someone accused them of being a bit too out of touch.

“Yes, I do believe fashion and entertainment world should show some human decency today”, said Natalia Maczek, the creative director of the fashion brand MISBHV on her February 26 Instagram story: “No one expects you to stop your business, but solidarity and respect can be shown in million other ways, not by sharing your new heels between shots of blood on the streets. We are soft power you and me!”

Maczek was one of the few to point out how tone-deaf some of her peers were.

A week later, during Paris Fashion Week, Georgian designer and creative director of Balenciaga, Demna Gvasalia, used the brand’s autumn-winter collection presentation to praise the Ukrainians. Having fled the war in his country in 1993 and being a refugee himself (at first his family settled in Ukraine to then move to Switzerland), Gvasalia used his own experience to show solidarity with the invaded country.

The show started with Gvasalia reciting the poem Long live Ukraine, for beauty, strength, love and freedom in Ukrainian. On top of that, every guest of the show received their own Ukrainian flag t-shirt.

Balenciaga was the first luxury label to speak out about the Russian aggression on Ukraine. A week before their Autumn/Winter show, the brand’s Instagram feed has been completely cleared of posts and the only thing remaining was resources and fundraisers for victims of the war.

“Helping spread awareness is definitely a number one thing we can be doing right now” says Maria Usanova, a Ukrainian Hair, make-up and prosthetics student at London College of Fashion: “There’s so much propaganda everywhere. There’s this guy who lives in Dubai, he’s half Russian. Mind you, he lives in Dubai, so he has all the access to Instagram, to everything, nothing’s censored. He replied to one of my stories about how to help Ukraine, he was repeating some Russian propaganda. I told him to go to hell”

In response, Maria received a message that said: “Enjoy getting a Russian passport in a week”.

According to Anna, for now, during the war, the main thing that creatives can do is to “show people what’s really going on. Because no painting, no song will help.”

Whilst Ukraine has been a number one topic in the media lately, “many people in the West still don’t even know who Ukrainians are. It’s important to show people who we are and why we matter. You know, even though bombs are falling on Kyiv now, we’ve been under attack for eight years, we’ve been asking for help for eight years”. 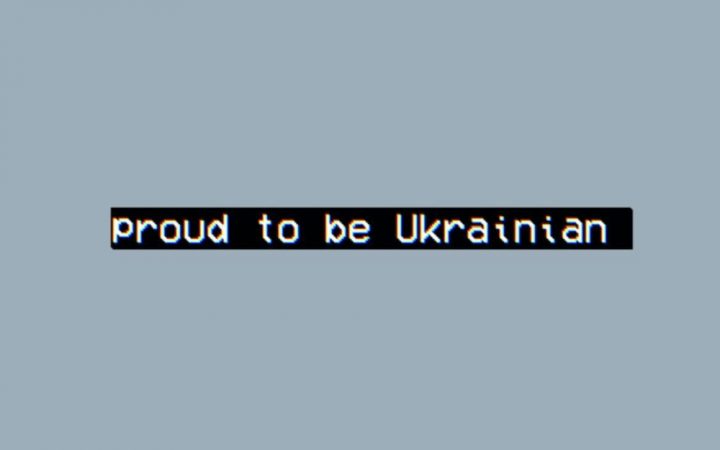 “That’s why people in the West might not understand us. Because they don’t know what it’s like to have your identity threatened. We do. Every day people die for me to be able to say I’m Ukrainian. That’s why I think the main role of any Ukrainian creative should be to speak up and educate people on what Ukraine is, why we’re not Russian.”

Anna is very well aware that, with all the economic ties that West has with Russia, its assertiveness will be limited.

“I know that we are living in a capitalist world but there’s gotta be something more than money” she continued.

Since my conversation with Anna, many Western brands started suspending their operations in Russia. Among them, is international media giant Conde-Nast, owner and distributor of titles such as Vogue and GQ in Russia. In its press statement, the company said it was forced to cease its operations in Russia due to the new censorship laws introduced in the country.

At the same time, the Ukrainian edition of Vogue, known for its avant-garde editorials, has completely focused on covering the war from a Ukrainian’s point of view.

“I would never have thought that a fashion magazine would look like this. Instead of trends and celebrity interviews, we are instructing on how to stop bleeding and how to support the Ukrainian army,” Daria Slobodianyk, an editor of Ukrainian Vogue revealed in an interview with Polish Vogue.

“Our fashion editor, Vena Brykalin, left for Milan Fashion Week the day before the war broke out. Now he has become our correspondent and thanks to him, Financial Times or Evening Standard know about the current situation here” continued Daria.

When it comes to the film industry, the Ukrainian war was a number one topic at most recently held BAFTAs. Additionally, A-list actors of Ukrainian descent such as Mila Kunis or Leonardo DiCaprio have pleaded for donations to the war relief.

Art galleries all over the world have also been organising charity actions and promoting Ukrainian artists, with various artists donating their work.

Marina Abramovic, who has been working in Ukraine in recent years, has expressed her solidarity with the country on her Instagram, focussing on promoting and organising benefit auctions to aid humanitarian relief in Ukraine.

Even though Anna has been living in London for the last four years, she would always get involved in various creative projects in her hometown of Kyiv. Her dream was to create more opportunities for creatives in her country, so that they would not have to seek them abroad. Now, they might be forced to anyway.

For Maria, the war meant a sudden wake of patriotic feelings she had never felt before.

“It’s interesting. My whole life I’ve been brought up in West. I’ve lived in Denmark and Dubai and I have always tried to kind of fit in more with the Western culture.  I also really wanted to stay in London; the industry for what I want to be doing is much more developed here. But now I don’t feel like I had ever had a bigger craving to go back to Ukraine.

“I honestly have never been prouder to be Ukrainian and it’s kind of horrible that it took the whole war to get my head around it and stop with all this, you know, Western bullshit of mine.”