In 2015, scientists discovered the collision of two black holes 30 times the mass of our sun by observing their gravitational waves.

Not only did this collision create ripples in space-time three billion years ago, its discovery changing astronomy as we know it, but it also enabled us to listen to a second of one of the most powerful, cosmic events for the very first time.

“It literally just goes ‘whoop!’,” he says excitedly as he imitates the cartoonish sound. This has also been described as “chirping” by scientists, which they were able to create by playing it at a higher frequency more easily detectable to the human ear.

While astronomers wonder how they could use future observations of cosmic sounds to further explore the universe, Cory had another idea: “I took that noise, and each time you hear the chime in the track, I have that noise buried underneath it. But then I also took it and stretched out the sample throughout the song, so then it becomes this really slow buildup throughout the whole track. Right near the end of the track, it starts to get more wobbly.”

Cory’s cosmic Easter egg in his song Attunement serves as an homage to his love for the universe. But perhaps more importantly, it sends a subliminal message out to listeners who are using the track to guide them through a psychedelic or otherwise therapeutic ceremony in the hopes that it activates “something primal, alien even”.

Cory has been playing the drums since the age of 12 with the aspiration to pursue a career as a professional musician. Fast forward to his age of 36 today, 18 years after his first profound, psychedelic experience, he’s finally decided to merge the healing effects of music and plant medicines together.

“There wasn’t really a direct moment when I thought I wanted to make music specifically for the psychedelic experience. I think it was just a combination of things over time,” he tells me as we meet virtually across different time zones.

“So a lot of my music career was focused on just being a drummer in a rock band, and I kind of took that as far as I wanted to. We ended up moving to Nashville, Tennessee to pursue that as a career and had a decent time with that. But then I started to see the dark side of the industry, and I started also really getting interested in electronic music. There’s just certain soundscapes and noises nobody has ever heard in electronic music.”

Shortly after, Cory became more interested in music production. A few software downloads and synthesisers later, he started to dive into learning about the healing effects of sound therapy and sound baths, with or without the influence of psychedelics.

“I really started to get obsessed with the nature of sound in general and what inside of us moves us emotionally and energetically, medically, even? I think what really started to kickstart things for me in that direction as well is probably combining mushrooms with different electronic artists that put a lot more intention into their music.”

During a solo trip, Cory started seeing structures forming behind the walls of his eyelids as he listened to some electronic, orchestral compositions of one of his favourite artists. Each song transformed the structures into a different sculpture with parts that were slowly rotating and morphing into each other.

“Something clicked that day for me because I started to understand that music and sound can create these structures in our mind, and somehow, some form of healing can come about through that too,” he told us.

“It just allows you to dive in a little deeper into thought patterns and emotions and be able to trace that stuff back to its root, like if you have some kind of trauma from your past, even if you’ve forgotten about it. Sometimes in those states, those things will come up, and then all of a sudden, you’re able to analyse it from all these different, objective perspectives.”

The healing effects of music during therapeutic sessions are not a new phenomenon to scientists, especially not to Indigenous healers who have been using music as a vehicle to connect with the spirit of ancestors or deities for centuries.

But while classical music used to be the preferred choice in psychedelic therapy studies for almost 80 years, researchers are increasingly more interested in the impact of electronic, ambient soundscapes to invoke mystical experiences and help patients process their emotions. 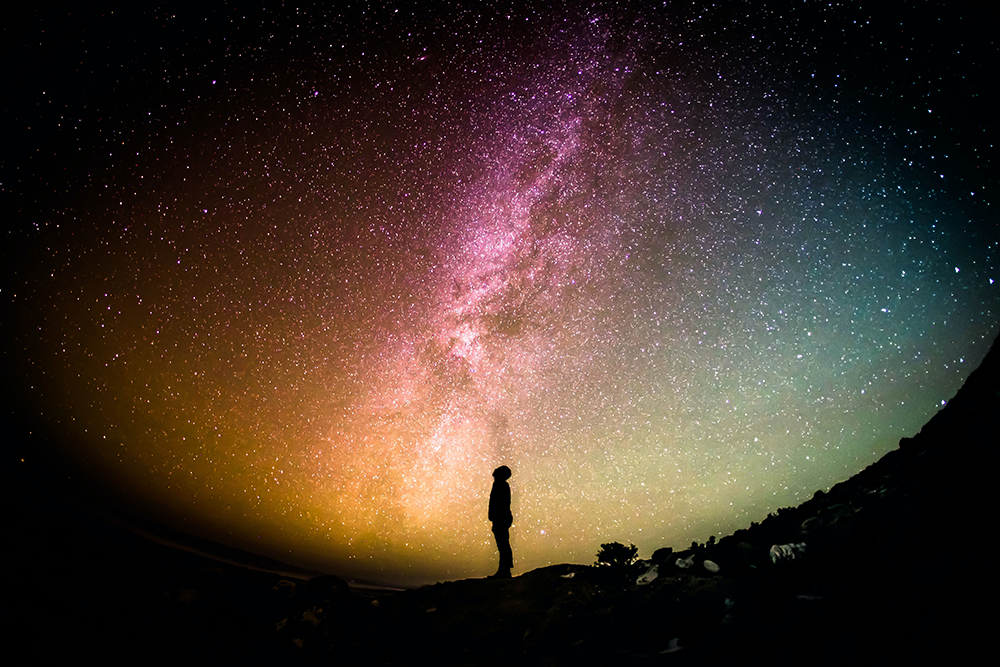 Astronomers wonder how they could use future observations of cosmic sounds to further explore the universe. Photo by Greg Rakozy [Unsplash]

Anyone who’s ever been on a dance floor has an intuitive understanding of the spiritual synergy between DJs and their audience. But today, scientists can quite literally measure the impact through, for example, MRI scans.

As explained by Wavepaths, the brainchild of Imperial College London neuroscientist and psychedelic researcher Mendel Kaelen, research has shown that there are overlaps in the areas of the brain that are activated by listening to music or taking psychedelics, particularly the parts of the brain that involve emotion processing.

Music under psychedelics can also help patients recollect autobiographical memories and trauma that was previously buried in their subconscious.

A 2018 study by Mendel Kaelen and others revealed that patients with treatment-resistant depression, meaning those who have tried traditional treatment methods such as taking SSRIs, also known as antidepressants, described that music had a “substantial influence” on their therapeutic experience.

Interestingly, it was the experience of the music rather than drug intensity, which the researchers found were more predictive of reductions in depression one week later. This suggests that music can be an important mediator in psychedelic sessions, supporting patients during the onset, ascent, and return phase of a psychedelic experience.

“You take your medicine, you play the track, and then it builds up perfectly,” Cory tells me as he describes listening to artist East Forest when he was performing live streams in lockdown, during which he combined the practice of sound baths while live looping.

“When I released [my track], I kind of made a disclaimer on my social media, mentioning it’s specifically for psychedelic therapy. But I also wanted it to be just a general meditation track. So I was like, this is for meditation, this is to help you focus and become aware and align your chakras. So, start from the root chakra and work up to your crown each time the note changes. That’s when you should be moving on to the next step. But then I added that it also pairs well with plant medicines.”

When Cory first shared the track with his friends, they all got together to put the track to the test. Amongst the group, one friend of his told him that listening to the composition before going to bed at night helped her with her insomnia, while his brother, a massage therapist, listens to it between clients to allow himself a moment of emotional reset and calm.

“He said each time he listens to it he has his eyes closed and headphones on, and he’s like, ‘I’m starting to see visuals with it now’. He was completely sober while in that state of mind.”

He attributes parts of this effect to what is called binaural beats, although it’s worth noting that scientists are still sceptical whether they can in fact have relaxing properties. Binaural beats are a kind of sound illusion, created by your brain when listening to two tones with different sound frequencies.

“Binaural beats can basically manually hack your brain into a different wave state. So, they can bring you out of your alpha and beta mind states and put you into the delta and the theta, which emulates deep meditation, relaxation and sleep,” Cory explains.

“So I kind of had that intention when I made the track, but I didn’t follow it down to the exact science. There are actually five different tones going on at once. But when they combine, they create that same kind of wobbling effect, like in the middle of your head if you have headphones on.” 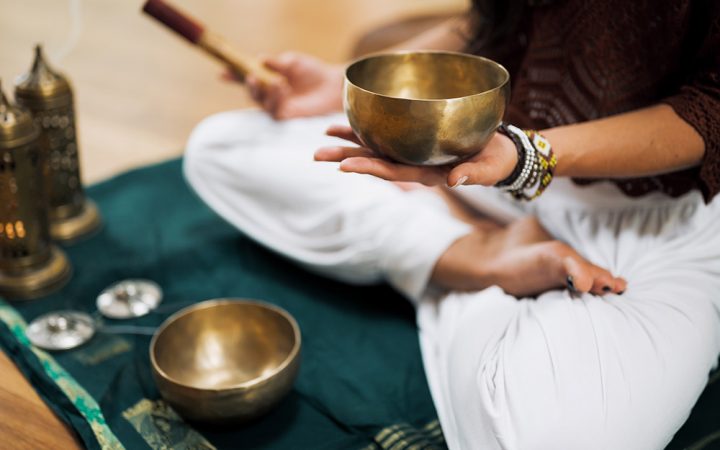 Indigenous healers have been using music as a vehicle to connect with the spirit of ancestors or deities for centuries [Unsplash: Conscious Design]

The connection between sound, the universe and our own bodies’ sonic vibrations is part of ancient wisdom which goes back to, amongst other, teachings in Buddhism. The gong, for example, is often referred to as the sound of the universe, or rather the echo of its creation.

It’s therefore no surprise that mystical experiences often reported by people undertaking psychedelic ceremonies sometimes serve as a reminder of their belonging to the universe, and the origin of everything known to us, including ourselves.

“What these instruments are sending out vibrationally goes back to just waking something up that’s primal inside of us. I mean, to me, it’s not all woo-woo stuff with what sound does to our bodies and our minds, because they’re just sending out pressure in the air, and it moves through water. We know that we partly consist of water and our emotions, our hormones are fat combined with water. It’s like everything vibrates and shakes up.”

After techno producer and DJ Jon Hopkins released his album Music for Psychedelic Therapy in November last year, it feels as though attitudes around the healing effects of music-assisted psychedelic therapy are changing.

After all, AWAKN Life Sciences has managed to bring the country’s first ketamine therapy clinic to the UK when they opened their practice in Bristol last year, and various digital resources including Wavepaths and the Trip app are all bringing psychedelic therapy into the mainstream, inspiring musicians like Cory to create music to support people’s healing practices.

But while we’re still walking between the legal and practical lines of psychedelic therapy, Cory tells me he’s working on releasing some more tracks meant for journeys spanning over longer durations, including a combination of live looping, sound therapy, the didgeridoo and percussion instruments.

At one point, he also wants to bring his music and healing practices back to their spiritual, ancestral roots by incorporating a gong.

“I think everything around us is making noise all the time, like the sun and the orbits of the planets and everything. I think there’s something very subtle; maybe it’s even in just the electromagnetic realm of frequencies, but every cell in our body, every atom is vibrating and connecting to everything around us. I mean, the Earth is vibrating: it has a Schumann Resonance. Earth’s frequency is 7.83 hertz or something crazy like that.”

Everything is making noise, he assures me. Everything from the microscopic cells in our bodies, to the sound of two black holes smashing against each other in just one titanic, cosmic embrace.

By Rebecca Keen
2 Mins read
An article about the Stop the Oil protestors who caused distribution on the M25.