I’m sure I’m not the only one who wishes London was more like it used to be. A little more romantic and perhaps a little more old fashioned. I want to go to jazz clubs and put on my best clobber and drink whisky in dark, smoky rooms while exchanging whispers with strangers.

The romance of London seems to be perishing in our digital age with people spending more time at home on the internet than walking through Hyde Park, and spending more money on going to the IMAX cinema than the theatre.

So you can imagine my delight when a friend invited me to go to a cabaret show one rainy Wednesday evening.

We arrived at Madame Jojo’s club in Soho. Entering the club down some stairs feels like you’re entering a real old cabaret club with dark corners and red curtains; its primitive staging and slapdash costumes only adding to the charm.

The show was the Cabaret Roulette, a recurring show at Madame Jojo’s, recruiting a whole variety of talented artists and burlesque performers.  Not knowing what to expect at the start of each act, it really is a roulette. The theme for the night was ‘addiction’ in its various forms.

The fun thing about the theme is that it’s voted for by the audience of the previous show, making audience participation paramount. Eva Von Schnippisch, the compère, opened the show with a hilarious stand-up routine in which she took on the character of a German army officer.

Her whimsical intro was accompanied by a short ukulele tune about her addiction to ‘waccy baccy’. She then went on to introduce each of the acts. Another comedy singer, Ria Lina, put on an act consisting of her misinterpreting the theme and proceeding to sing a long song about her American ‘diction’.

The highlight for me – and by this I mean I was crying with laughter – was Peggy de Lune, who took on the role of a needy American schoolgirl desperate for Facebook friends. Her use of an uncomfortable audience member had me rolling on the floor. 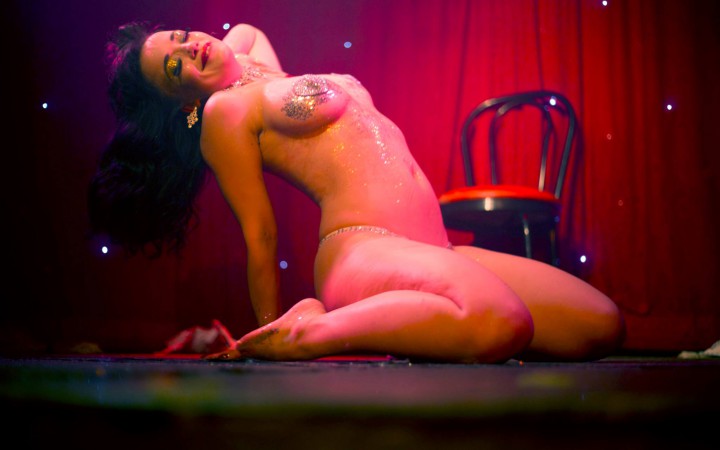 Amongst the other acts was an adorable clown, Kiki Lovechild, whose mime involved hundreds of butterflies made out of tissue paper. There was a terrifying drag act who performed as the embodiment of addiction.

Cabaret star Mister Joe Black made some very funny and charming observations about the modern day addictions that we perhaps don’t give credence to like Netflix, shopping and Instagram. He did this through a long poem to music: a beautifully executed performance.

Personally, however, it was Bettsie Bon Bon’s bump ‘n’ grind performance that stole the show for me. Her addiction was to glitter and she managed to conceal it in some very imaginative places, showering the audience with it whenever she discovered another stash.

I already feel I’ve given away too much. But if you want a little taste of some old Soho glamour then I can’t recommend it enough. At £15 for a fun filled evening – it’s a steal.

The show runs once a month until March (excluding December).