Borderlands: The Pre-Sequel will be instantly familiar to anyone who’s played the previous two games.

The guns feel the same, the movements the same; hell, it even has the same user interface. So why should you buy it?

To start with, Pre-Sequel offers a new campaign with four new classes.

As the name confusingly conveys, the games story is set after the first Borderlands but before the second charting Handsome Jack’s rise to power.

Arguably Jack was the best character from the last game.

Yes he was the villain, but he was a likable villain whose personality and character carried him through and easily made him the most memorable part of that game, so it’s nice to see him make a return and get a different perspective on what made him how he is.

Now the four classes are a different affair from what I’ve come to expect.

Gone is the rigid set of tank, damage and support and instead we’re left with a group of more versatile characters that all seem to merge into the support role.

Wilhelm, The Enforcer seems the closest to a tank class in the game; his ability gives him two flying drones that aid in combat. One will heal your health and shields you, whilst the other offers more offensive support.

Athena, the Gladiator, is the class that I’ve been having the most fun with. Her ability consists of deploying a frontal shield that will absorb all damage, after a short while you’ll then throw the shield at an enemy dealing equivalent damage to the amount you absorbed, making for a devastating finisher.

Nisha, The Lawbringer, was a class I wasn’t too keen on.

Her ability consists of an auto-aim mode that, whilst fun to look at, taking out multiple foes in a quick flurry, is actually quite boring and unchallenging, seeming more of a crutch to newer players.

Finally we have the class that most people will play and I loathe, Claptrap.

Yes, that annoying trashcan of a robot. Complete with his usual quirks, he is now a playable character.

His ability is equally as random as his humour, using numbers pulled out of thin air to analyse the situation.

Claptrap will deploy one of several weapons to deal with the matter, ranging from a giant bomb, to converting into a pirate ship and gunning foes down with giant canons to the tune of the 1982 Overture. 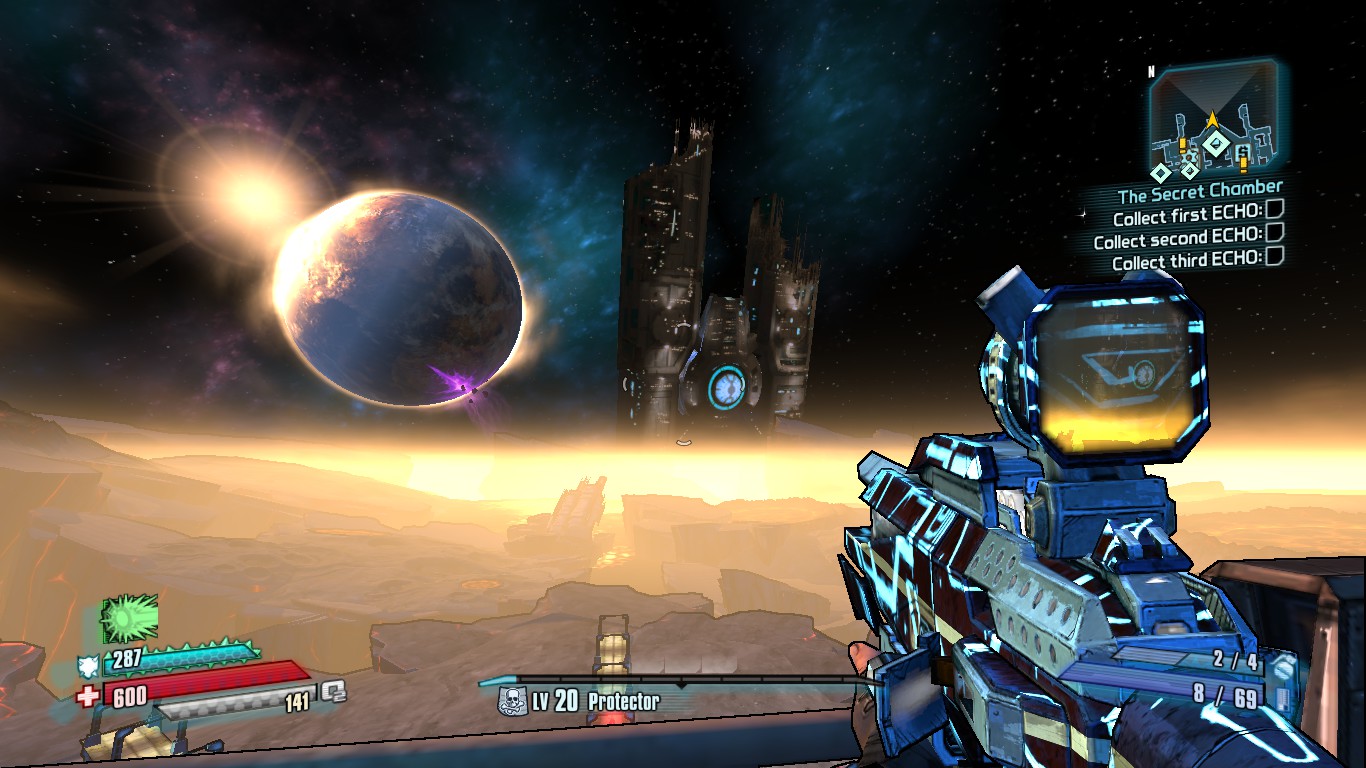 The setting for the game is Elpis, Pandora’s moon, and because of this, some new mechanics have been put in place to make the game more atmospheric.

Or less in this case, as the game now has an oxygen meter for when you feel like taking a stroll outside. When you add to this the low gravity environments, you get more vertically inclined gameplay than Titanfall.

The main downside to all this low gravity jumping and floatiness is the amount of times you will fall to your doom in one of Elpis’ many chasms.

A key point in trying to avoid your demise is by remembering you don’t have a jet pack, it’s a booster pack. As space movies are so fond of telling us, it must be used sparingly and accurately, which becomes a bit of a side thought during a heated fire fight.

Borderlands 2 became a constant pain in the later game because it was unwilling to give you the weapons that could effectively deal with the enemies.

The Pre-Sequel not only has a better drop rate but also the introduction of the Grinder vendor which helps to turn all those uncommon pool weapons you have into something rare, thus removing some of the more irritating RNG from the game.

Team this with the new Cryo and laser based weapon classes and you have yourselves the making of a really fun game.

They do more damage the longer you hold down the fire button, but do become a bit inaccurate as a result, making it a fair trade off.

If you’re looking for more of the same, Borderlands: The Pre-Sequel easily provides – it doesn’t divert too much from the formula that Gearbox have based the series on.

The ‘if it ain’t broke, don’t fix it’ mentality seems to be paying off with each new release.

I can actually play The Pre-Sequel without breaking my keyboard due to unfair drops systems, which is always a good thing.

It adds enough to keep it interesting, and thanks to Gearbox addressing some of its predecessors issues, its a fun game that you can switch off with and enjoy with friends.

By Izabela Kruczkiewicz
4 Mins read
We talk to gamers about the released of a new open-world role-playing game set in the Harry Potter wizarding universe.
Culture