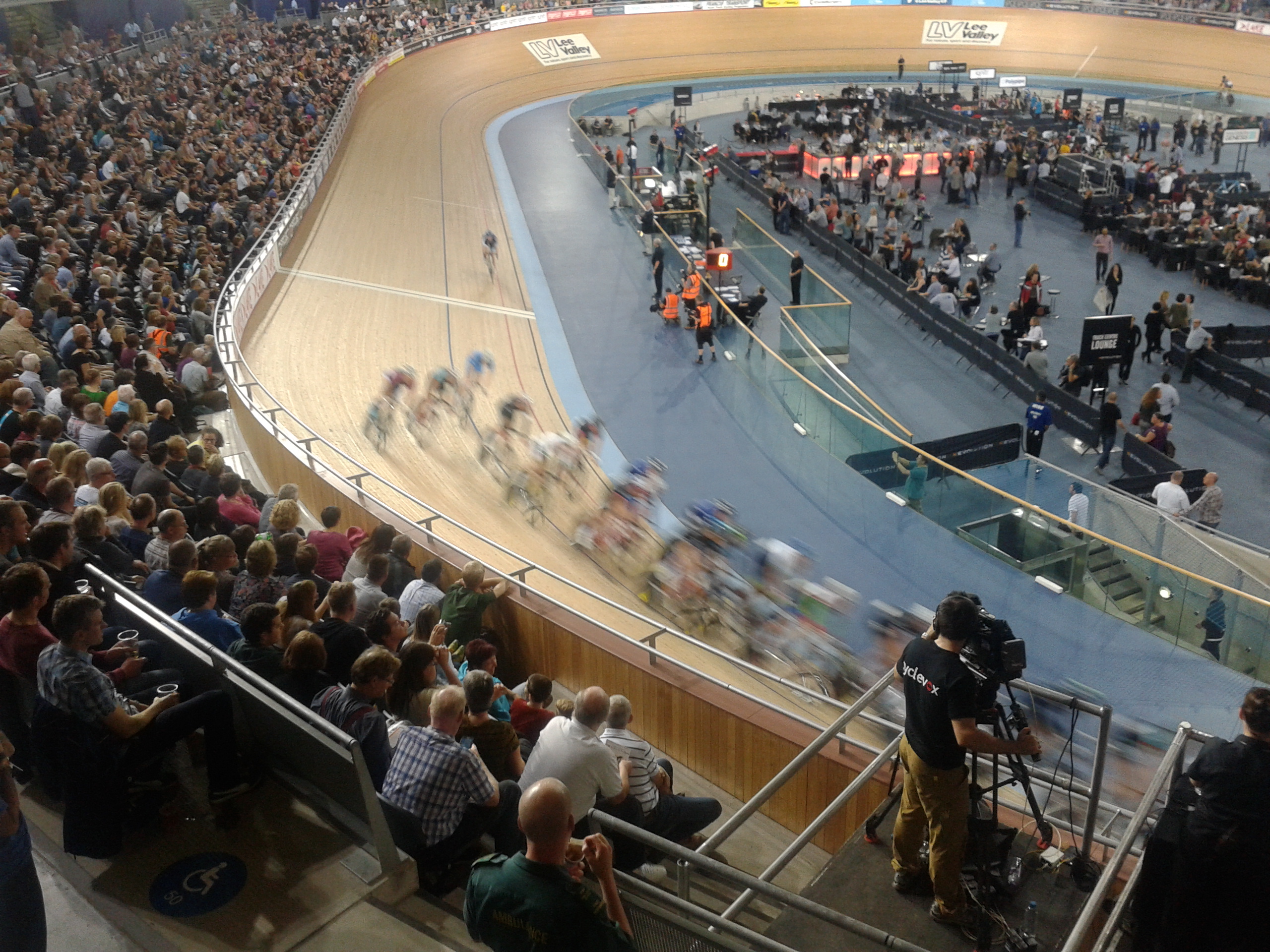 The Olympic Velodrome played host to the first round of the 2014-15 Revolution Elite Track Cycling where a selection of the worlds best cyclists battled it out in front of an emotional crowd in Stratford.

The evening session of round one started in emphatic style as Wiggle’s Trott dominated the Points Race to win by nine points and win the Omnium, taking her winning streak to six events.

After her Omnium win, Trott looked to the next event which was the Australian Pursuit; the aim of which is to not be overtaken by the rider behind you and, when the timekeeper says so, be the first back to your starting spot. Eight riders started but the final involving Trott, Vos and Elinor Barker came down to a photo finish. Trott came out victorious once again.

Alex Watts, a spectator, who is a keen amateur mountain biker said, “The racing here is brilliant! It’s a totally different experience to watching it on TV, as you can appreciate how fast they are travelling. I’d struggle to do a lap under 23 seconds and some of them are doing it under 18 seconds – it’s extraordinary.”

The crowd of 5,000 was treated to six ‘Future Stars’ events; a Points Race, Scratch Race and Six Lap Dash for the boys and girls of tomorrow. Rebecca Raybould and Fred Wright won their respective Six Lap Dash events with equally impressive efforts in the final two laps. Jamie Ridehalgh and Jess Roberts won the Points Races and Eleanor Dickinson and Rhys Britton won the Scratch Races.

Next was the event which arguably requires the most skill and concentration; the Madison One Kilometre Time Trial. The Madison is an event in which two team mates take it in turns to do the quickest two laps they can, whilst switching half-way through by catching their partner and slinging them in an attempt to use their momentum to gain valuable milliseconds.

The team of Jens Mouris and 2014 Commonwealth Gold medallist Scott Sunderland, competing for Orica GreenEdge, set a blistering open time that looked unbeatable until the German duo of Christian Grasmann and Marcel Kalz came along and blitzed it by 0.4 seconds – a life time for elite track cycling and a world record time for 2014.

The crowd were given full value for money as each of the sprint finals went down to the third and deciding race. Matt Rotherham put in an impressive final burst to just edge out Chris Prichard on the finishing straight to take third place overall. However closer still was the final for first place between Lewis Oliva and Juan Peralta, which Oliva won by 20 millimetres on the photo finish.

Young Sky rider Swift gave his team their first win of the series after he lapped the field to win the Scratch Race. Dowsett also managed to gain a lap however couldn’t beat his fellow Briton in the dash for the line.

In the final event of the evening, Trott showed another example of her breath-taking speed in the Elimination Race giving her an eighth win out of eight events. Trott’s speed across the final lap was simply phenomenal, clocking 40 miles per hour across the line.

Perhaps the best spectacle of the evening was the Longest Lap, aka Marymoor Crawl, where many riders including Swift effectively stood still on the track, keeping their balance and did their best not to roll forward and cross the finish line and therefore elimination. The skill involved was clear to see and made you wonder how many hours of practice had gone into pulling the move off successfully.