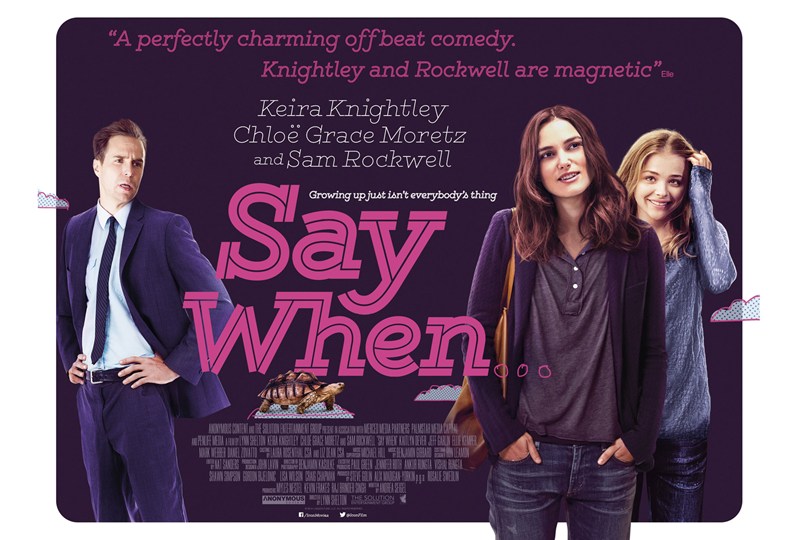 Megan (Keira Knightley) is 28, has an advanced degree and a loving boyfriend of ten years, but her life is a mess. She has no stable job and still expects others to make decisions for her.

The uncanny friendship she forms with Annika (Chloë Grace Moretz), a teenager Megan meets at the supermarket, will help her realise that her high school days are over and she needs to sort herself out.

The plot of Say When – called Laggies in the US – is interesting and unusual. The characters are quirky and sarcastic, and have troubles adapting with the ‘normal’ ones. But despite the interest one might have in such films, these plots have become exactly what they tried to escape: the norm.

They’re repetitive in their trying to be new with unexpected developments, but end up being the same trite old thing.

Director Lynn Shelton delivers a technically sound flick, with great visuals, but lacking an overall conclusion. The film is a collection of various story lines that aren’t entirely concluded at the end and this seriously undermines the stability of the plot as a whole – will we ever know what happens to Annika’s friends? What will Megan’s decisions be?

The duo formed by Moretz’s Annika and Sam Rockwell’s Craig (Iron Man 2, The Way Way Back) is a nice break from the usual father-daughter units offered to viewers in TV or other films: no Gilmore Girls style of parenting, with friendship and the everything-gets-better approach to life, but teenage angst and parents who don’t always know what they’re doing.

Knightley’s performance is flawless, and it’s refreshing to see her interpret a carefree character compared to the more structured and serious roles she’s taken in the last few years.

Overall, Say When is a charming and light-hearted film, but it could be improved by serious script changes to make it more structured, possibly by cutting the time dedicated to long aerial shots to focus more on the conclusion.

If you don’t care about a logical succession of events, it’s a good catch when cinemas have nothing better to offer.