Should we all do Ayahuasca? 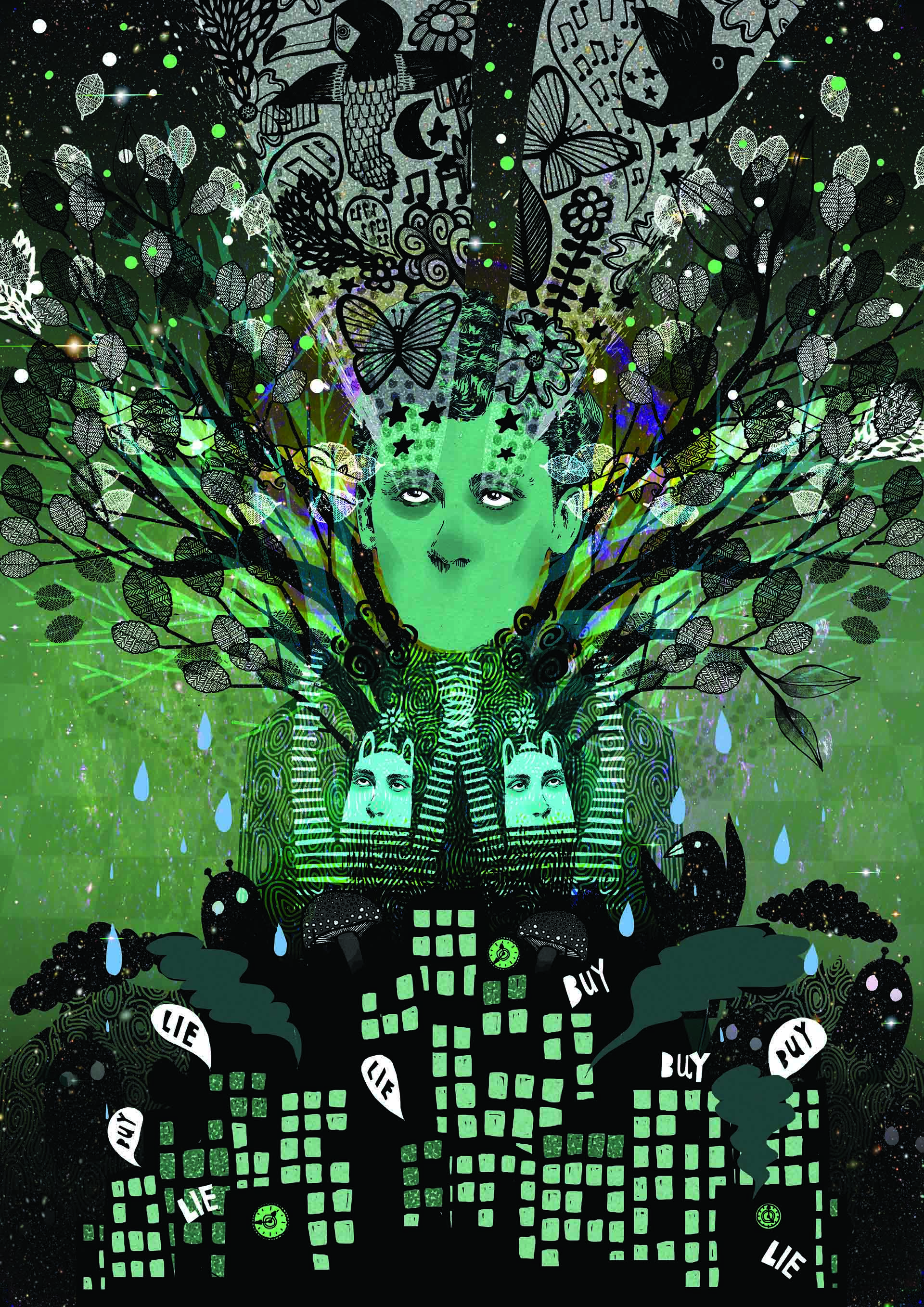 It seems everyone’s doing it. Mephedrone is dirty, cocaine is impure, ketamine is heavy and weed just seems a bit … slow.

DMT has been the rising star for a while now, and ayahuasca seems to be the most legit way of doing it. Why? Because it’s been used as a herbal medicine for millennia and requires guidance from shamans who’ve given the substance some thought.

People seem to be seeking out the Amazonian brew in a search for truth and guidance, rather than a trippy trip to a world full of garden gnomes and colourful shapes. Having said that, most people who’ve documented their experience of ayahuasca all recall colourful shapes and extraterrestrial beings.

Discussing the mind-altering substance with some friends in the know, it seems ayahuasca contains the key to unlocking the secrets of our minds, shining a light on the dark spots of our internal worlds and potentially being a game changer in a current universal shift of consciousness.

Was Carl Jung tripping on ayahuasca when he said: “Who looks outside, dreams; who looks inside, awakens?” Or is ayahuasca just a way for us to get high with a clear conscience, blaming it on a ‘higher cause’?

The hallucinogen, sometimes referred to as yagé, is smoking hot in the media at the moment. Many major publications have reported the increasing interest in the drug, and big dogs like The New York Times have discussed it. Vanity Fair even sent a reporter to the Amazon to try it out.

Paul Simon, Sting, Tori Amos, Lindsey Lohan have all said they’ve done it. Miss Lohan called the experience eye-opening and intense, saying, “I saw my whole life in front of me and I had to let go of the past things that I was trying to hold onto that were dark in my life.”

Musicians like Father John Misty from Fleet Foxes, Devendra Banhart and members of Klaxons sing about it. Ayahuasca has been portrayed in TV series like Weeds and Nip/Tuck – and in comedy Wanderlust, Jennifer Aniston drinks the infusion (to effects not quite representing a true ayahuasca trip). Bruce Parry did it in on one of his BBC series, calling the experience “one of the more humbling nights of my life”.

The beverage is made from a variety of ingredients following an intricate recipe used in the Amazonian jungle for centuries. The two main ingredients are the ayahuasca vine and leaves from the Chacruna tree, and the active ingredient in the drink is considered to be Dimethyltryptamine, DMT for short, which is said to put you on a powerful journey to realms still unexplained.

The vine is pounded into long thin strips and placed into the bottom of a cauldron (not too dissimilar to Snape’s in Harry Potter) and the chacruna leaves are packed on top. If you do it the proper way, the elixir is then boiled for about six hours by at least one trained shaman. Water is added throughout the day and the concoction is finally refined into a thick brown liquid.

For between £1,400 to £1,650 you can partake in a seven day retreat at Blue Morpho in the Peruvian Amazon, where you’ll be led though the traditional rituals, including the demanded diet of no sex (with yourself or others), no meat, no dairy, no salt, and no other drugs for a week prior. Blue Morpho is just one of many such retreats of varying quality and intentions outside the Peruvian city Iquitos.

Blue Morpho state on their webpage that they’re “dedicated to your transformation. Your complete safety, fulfillment of deep, mystical, once in a lifetime experiences, and positive life transformation are our highest priority” and that “an overwhelming number of our participants have experienced nothing short of miraculous transformation.”

This seems nice, but expensive.

Charles Grob, M.D., a professor of psychiatry and paediatrics at UCLA’s School of Medicine is one of the only individuals who’s done extensive research into the physical and psychological effects of ayahuasca. The research he conducted for his Hoasca Project found (amongst many mind boggling things) that ayahuasca might be a far more sophisticated and effective way to treat depression than SSRIs (anti-depressants).

In August this year Vice wrote about Full Circle – a spiritual movement led by Andrew Keegan, mostly known from the nineties cult teen movie 10 Things I Hate About You. Throughout the piece I got the familiar feeling of distrust I feel for many of these self-appointed spiritual activists. The few spiritual pioneers I’ve met have had, to say the least, contradicting beliefs and actions.

Full Circle isn’t the only celebrity-endorsed spiritual movement coming out of Hollywood. Transcendental Meditation has been promoted by Sir Paul McCartney, Moby and David Lynch – a type of meditation that’s purportedly “the purest, simplest, and most effective form of meditation the world has known. It’s the pure technique of transcending – settling to the simplest, most powerful state of awareness – untainted by any mind control or thought processes.” The standard six-month course costs between £190 and £590 depending on age and income.

Madonna still claims to be devoted to Jewish mysticism Kabbalah, and so were Britney Spears, Ashton Kutcher and many more. John Travolta and Tom Cruise are famous Scientologists. It seems, however, that a new wave of ‘New Age’ is what’s rolling in from Hollywood. Why do celebrities seem so keen on spirituality? Or, are they just famous embodiments of how we all feel?

I Skyped my actor friend Finn Jones, best known for his role as Ser Loras Tyrell in Game of Thrones, to ask him about all of this – and what ayahuasca has to do with it.

“As an actor, you’re always looking into yourself to draw inspiration for roles – medicines like ayahuasca can be really helpful in this respect – it can aid the creative process. I know a lot of people that after ceremonies have been given incredible stories for novels or certain vibrations and frequencies to inspire music. The medicine can also induce serious psychotherapy in a firm but nurturing way – it’s certainly helped me grow.”

“In the world at the moment it’s so difficult to find truth. You can’t find it in your government, in your economics and there’s certainly no truth in the vacuous field of media and celebrity – we need community and we need teachers, elders to lead us on the right path. Ayahuasca stood out to me as something that could instil this. More and more the world is becoming entangled with lies. It seems we’re living in more of an inverted dream world. People want substance, people want to know the truth and by taking ayahuasca it can put you on the right foot.”

Yeah, I’m ready to believe that. I reckon that with all this technology around us, the weirdness of isolation contrasted with the total lack of private life due to social media, as well as the destruction of our planet and psyches, quite a few of us are left wondering ‘is this it?’

So will ayahuasca show us the truth? Sounds like a way better way to spend a Friday night than shoving baking powder up your nostrils. I want clarity, purpose, purity and authenticity!

“Ayahuasca isn’t something to be taken lightly, it’s not recreational. If someone decides to embark on such a journey, do your research and make sure it’s with the right people in a loving, safe environment. You can be led down strange paths and it can be very traumatic, but cathartic. It’s not all love, light, oneness and unity – you can come across very negative entities,” Finn warns me.

[pullquote]”Ayahuasca isn’t something to be taken lightly, it’s not recreational.”[/pullquote]In addition to this sobering information, I’ve read the horror stories of people going into the jungle or metropolitan flats and getting caught up in some pretty dodgy deals.

Again, Jung seems to have been onto something when he said: “There is no coming to consciousness without pain.”

So if it isn’t an easy trip, why is it getting so popular? Are we really not just bored of cocaine?

Finn says that the reason he thinks ayahuasca is the drug of the moment is because of the internet and how it allows people to share information and lifestyles:

“That’s how I first heard about it. I found out about DMT firstly through a yoga teacher of mine who recommended me to see a documentary called DMT: The Spirit Molecule, which I recommend everyone watch. I then started researching ayahuasca, listening to Terrence McKenna, Rick Strassman, Graham Hancock and watched various other documentaries. This also all coincided with 2012 and the cusp of the shift in consciousness.”

Yes. The shift in consciousness predicted by the Mayans at the end of their ancient calendar which finished in 2012. Part of me believes it’s happening – I mean, I sure do read more and more about world conscious things.

People seem to care more about the environment, they do yoga and make cold pressed kale juices. But is this really a shift in consciousness or is it a lifestyle pursued by a few, mostly educated individuals in creative or health related professions?

My friend Anton Sirianni, a spiritual Australian playwright, put it nicely when he said: “in the ’60s we had the hippies, now we have the hipsters.”

Is there a problem when the search for purity, truth and spirituality and sacred rituals – such as the ceremonies around ayahuasca – become trendy? Has it all gone wrong when kids can meet up in a London warehouse to do ayahuasca for an evening, without the traditionally attached ceremonies but with potentially dodgy shamans and less sincere intentions?

So how long will it take until this change is complete? Finn says we’re going to see a big rumble within our lifetime. It’s already happening, he argues.

Perhaps the commercialisation of spiritual awakening will shift the currently unaware consumerist part of society to buy into this change? Maybe we should all do ayahuasca? I know I’m keen.

But ayahusca is illegal in the UK. Finn disagrees with this law. He believes that in a free democratic society the fundamental right we must have as human beings is sovereignty over our own consciousness. In addition, Finn recommends that all politicians should take a trip down to the Amazon and have their heads opened up.

Being someone who tends to sometimes get a little dark and heavy in my thoughts, I’m curious of the healing properties that have been documented. Kira Salak in her celebrated piece for National Geographic reported: “the severe depression that had ruled my life since childhood had miraculously vanished” the morning after her ayahuasca trip.

Anton quotes Jung again: “As far as we can discern, the sole purpose of human existence is to kindle a light in the darkness of mere being.” He continues to say that a lot of people come out of their ayahuasca experiences talking about the dichotomy between light and darkness in our universe.

To find out more about spiritual awakening and ayahuasca Finn Jones recommends watching the documentaries DMT: The Spirit Molecule and Stepping Into The Fire, and reading Graham Hancock’s The War on Consciousness.

By Annika Loebig
7 Mins read
Artefact reports on the benefits of music in psychedelic sessions and speaks to one musician about his approach.
Lifestyle

By Lillie Butler
3 Mins read
Manifestation, a concept that has become very popular of late. But what does it entail?
Culture

By Aman Hafiz
7 Mins read
We explore the reality of a character called Vincent van Dope, the drug dealer alter-ego of someone who has made enough money to turn his life around.