Diary of a Drunk Boy | The Lily Allen Party

Nothing could’ve prepared me for the night that led me to one of Lily Allen’s after-parties at Loft Studio in West London.

To understand the real magnitude of this story, you must know that I’m a die hard Lily Allen fan. I was already feeling wobbly as I walked to the bus stop with four of my friends following an electrifying performance by Lily herself.

We caught wind of the party while having a cigarette outside with a few members of the production crew. They mentioned they were heading onwards to the singer’s after-party at this club and that we should go along too.

From this, I’d made the assumption that it was an open event for anyone to go… I was fairly sure that Ms Allen wouldn’t even be making an appearance.

Straight off the bus and I could smell a party in the air.

The music was pulsating down the street and we just followed the sound – I was full of dutch-courage and couldn’t wait to get inside. My friends: Molly, Jake, Charlie, Jenny and I made our way through an aggressive herd of paparazzi to the club doors.

A big iron gate into the courtyard stood between this party and us. We didn’t know what might await us inside but I was dying to find out. We came face to face with a frosty-looking lady holding an iPad guest list. It didn’t take me long to realise we weren’t supposed to be there.

But by that point I thought I was in for a penny so I went for it. 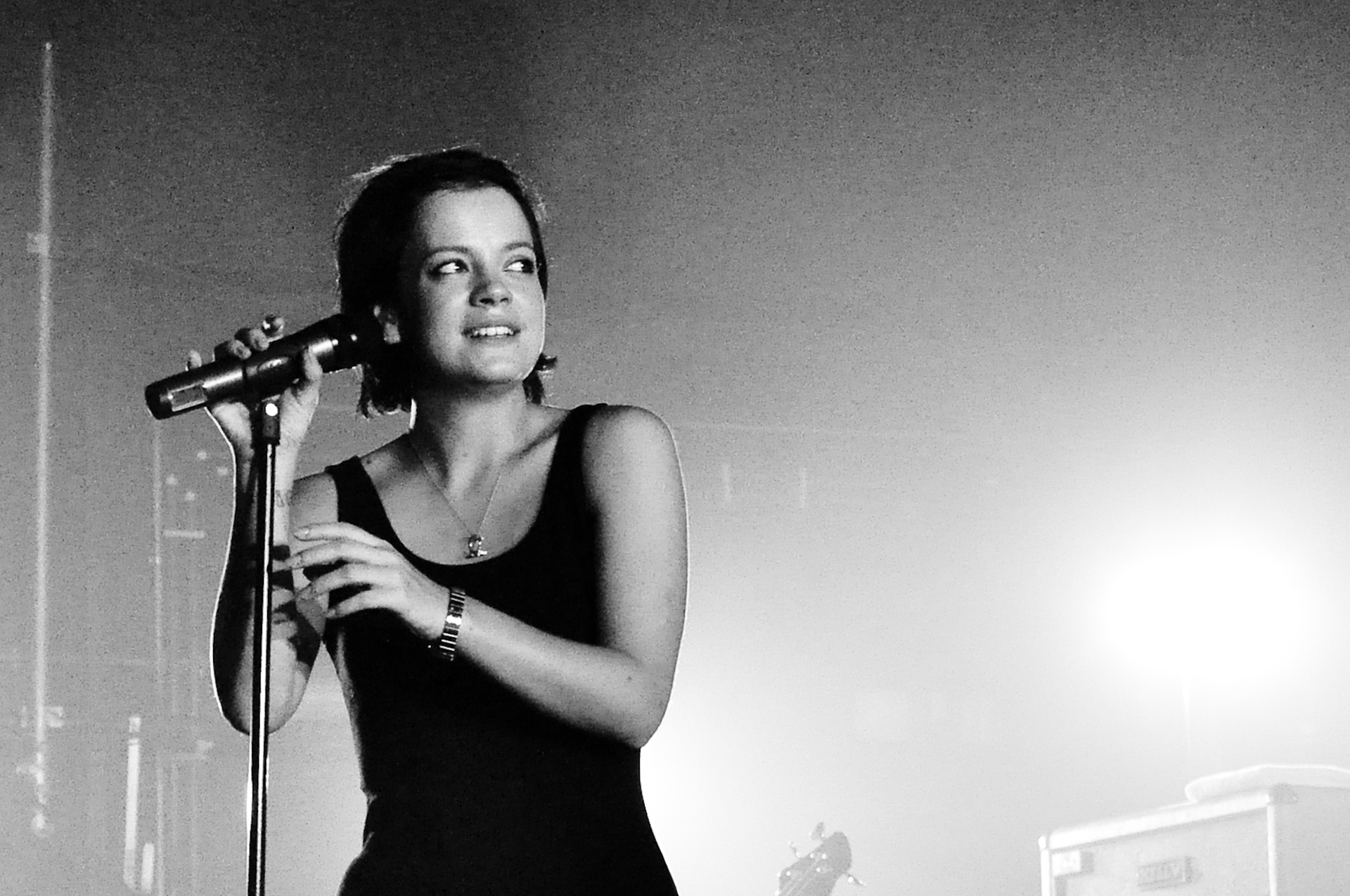 Me: Yes, we should be under Dom Brown?

Her: Um, I can’t see your name down here…

Me: Oh maybe it’s under, Dominic Brown instead?

Her: Still can’t seem to find you.

I began to panic. This was as far ahead as I’d thought. I didn’t have a follow up strategy. At this point my friend Charlie, without missing a beat, who’d been reading the guest list over my shoulder, blurted out the first name that caught his eye.

Charlie: Oh Dom, we must be under my name. It’s Dan, Dan Boyce.

Her: Oh that’s right, Dan Boyce plus four. In you go.

And that was it (luckily there were five of us). We’d completely blagged it.

We sidled through the lobby with a feeling of accomplishment. I brushed past Lily and her husband as we made our way through and managed to hold in a little squeal of excitement.

She was still wearing the pink crop-top she’d been wearing on stage accompanied by a pair of light-up buffalo trainers both by Ashish. Charlie poked me in the back and we proceeded up the stairs.

Loud music, lights and lots of people filled the space up to the high ceilings of the Loft Studios. The words ‘free bar’ were thrown around and to my delight that was exactly what we found. I took to the dance floor with my first glass and made sure it was empty every time a waiter came around offering a refill. It’s very important that you make the most of these situations.

I circulated in the crowd (mostly to see if I could spot any other famous faces). Harry Enfield rested one elbow on the bar while he exchanged pleasantries with Keith Allen. Lily sat with her sister Sarah and sipped Red Bull through a straw while Sarah lit a cigarette.

The room was a buzz with people who’d been to the concert and some were just friends of Lily’s. I kept forgetting that we weren’t actually supposed to be there at all. I took a moment to revel in the magnitude of what was happening. I had to go for a cigarette just to catch my breath.

I emptied my glass and made my way out to the courtyard, which was complete with a massive complimentary BBQ and a second bar. The evening was cool.

The first two people I passed were trying to scab a cigarette as they generally do. If you want to smoke, buy your own! I was stood battling with my lighter and gust of wind when Miquita Oliver stumbled towards me asking if she could use my lighter. I obliged, she thanked me and smiled as she walked away.

It was at this point I decided it was really time to exploit the open bar.

I asked for a gin and tonic but was told this wasn’t an option and that I could only order a cocktail from the ‘Belvedere Menu’. I laughed and chose one. I then tried to make my way through the cocktail menu.

Finally, the time had come for me to speak to Lily. Something I’d been gearing towards since I first heard Smile when I was 11. I praised her for the performance and told her what a big fan I was.

“Thanks I’m glad you enjoyed it,” she replied. She was so friendly. I was really expecting her to be a bitch. You know what it’s like when you meet someone – it’s usually a disappointment. Well, this wasn’t. She lit up a cigarette and excused herself from the group.

After my composed introduction to the host I began to feel the alcohol taking hold. The champagne bubbles were starting to deflate but the vodka was going strong. I vaguely remember dancing with/near Lily and accusing the cloakroom of losing my jacket, before realising I’d leant it to Molly.

I must’ve reached the point where my night couldn’t have got any better. But in true form I stayed until I was asked to leave.

I woke up the following morning with a splitting headache and what felt like a broken nose. But I didn’t regret a moment of it.