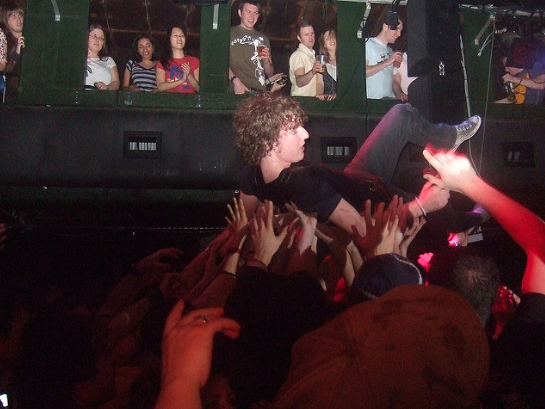 From the age of 12 I was obsessed with music – my bedroom walls were covered top to bottom in NME covers, the one magazine I had a subscription to.

My wardrobe was almost entirely band T-shirts and by the age of 14 or 15 I was at gigs almost every week, even if I had to go on my own.

I’ve found that recently I have lost that passion. I’m much less interested in new bands, and when I go to gigs I feel like an oldie up the front, and I’m only 21.

I went to see Slaves a few months ago, and was close to the front until I realised I was surrounded by pissed-up 15-year-olds getting off with each other and falling over. I realise that used to be me, but it all just felt a bit weird.

I want to start discovering new music again, but I keep putting on my old favourites, and I still know every word to them. I guess it’s because that was the soundtrack to the time I had the most fun and really didn’t give a shit about anything important.

Since NME has turned free, and in turn absolutely dire, I’m gonna have to put in a bit more graft to find my new musical obsession.

There’s obviously plenty more where all this came from, but it’s the start of a nostalgic period of rifling through my old CDs.

There was Mystery Jets and Hot Chip, who are still massive and making brilliant music, as well as Ladyhawke, who is releasing new music this summer, and Golden Silvers and loads more also covered my walls and bleated from my headphones on a daily basis.

The years covered below were incredibly synth heavy and carried many a catchy chorus. Beware of having these songs stuck in your head for a few days.

Until something new and exciting really catches my attention, here’s my top ten tracks from 2005-2009 (also known in my mind as The Golden Years).

The Leeds indie band used to get me so excited every time I heard them. And this is the track that sparked the thought for this article. I heard it a few weeks back and recalled literally every word, releasing a huge surge of nostalgia. I sadly never saw them in their prime, but I can only imagine it was a sea of skinny jeans and sweaty boys. Other bangers from these included I Found Out and Romantic Type.

Like Pigeon Detectives, Kate Nash went on to make more records, but none matched up to her 2007 album Made of Bricks. Foundations is the song that shot her to fame and an indie idol for girls everywhere. It’s so catchy that you can sing along after only hearing it one time, and actually still sounds alright now.

Naive was the fourth single to be released from The Kooks’ first album Inside In/Inside Out. Singer, Luke Pritchard was a total heart-throb and we all tried to imitate the slightly odd way he sings in the song. Naive got us all a bit emotional when we sang along to it on the school bus, playing from a second hand Sony Ericsson phone.

At first I thought Lily Allen was just dead cool for wearing fancy dresses with a pair of Air Max and ridiculous hoops in her ears. Once an indie idol in music, she’s now more of a feminist idol on Facebook. One of many absolute pop bangers on Alright, Still (2006), Smile was another that made it alright to swear as long as it was in a song, and more importantly, made it cool to be a girl.

This is one on the list that I now hate, but I loved it so much at the time I had to include it. I saw La Roux support Lily Allen in Leeds and it was such a powerful thing to see a gig entirely made up of women. In For The Kill was nominated for awards and made it to number 2 in the UK charts, but also had some pretty good remixes by Skream and Skrillex. The original electro beats really did it for me though.

New Rave was BIG in 2007. Neon beads, metallic eyeliner and backcombed hair were considered fashionable. Klaxons led the way and were one of the biggest in the genre. This track seems timeless, although the album it came from, Myths of the Near Future (2007), didn’t cut the mustard. Listening to it recently, I realised it is one of the dullest albums i’ve ever heard. This track however takes me back to a time where the future seemed extraordinary.

Bloc Party made a long awaited comeback a few months ago. One of the most technically great bands from these few years that have stood the test of time. Banquet is easily an indie classic.

I feel like Esser was hugely underrated and deserves more recognition. He only released a handful of electro pop singles but he could have been so much more if only NME had stuck him on a cover. This track is repetitive and catchy, what more could you want?

Another golden New Rave track. This was constantly on NME TV and their compilation albums (of which I owned every single one). This is really one for a fan of The Mighty Boosh and Skins.

It’s no surprise that a member of CSS was going out with a member of Klaxons. It was a couple carved by the indie gods. This track admittedly sounds slightly like the one above, but that just shows what kind of music was cool then. High pitched electro for days.