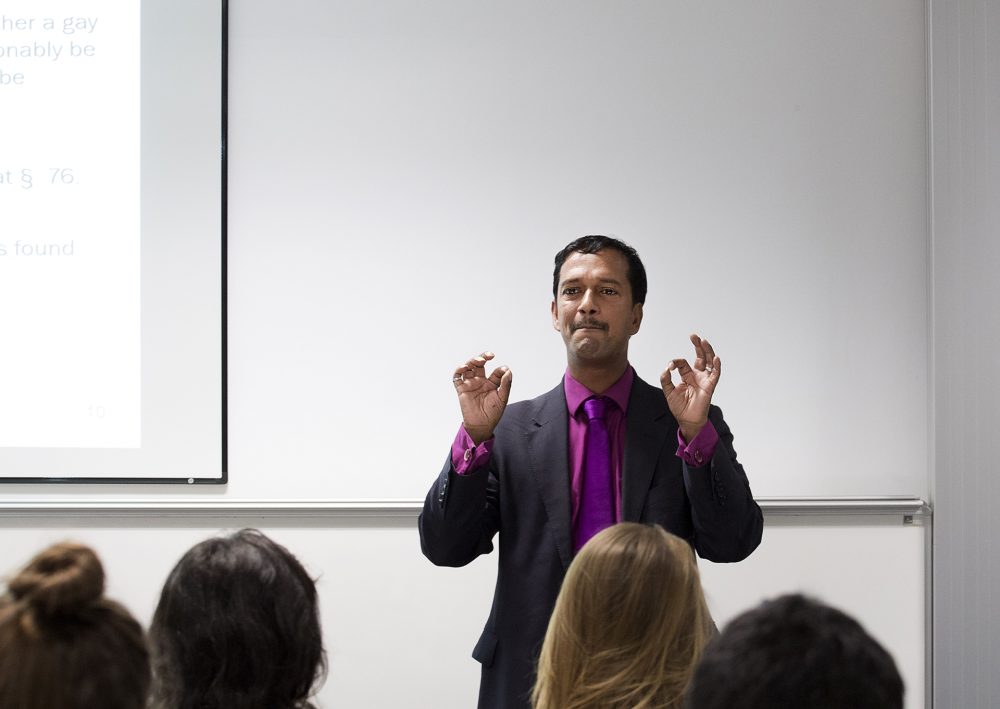 It’s 2014, and still there are seven countries in this world that impose the death penalty on members of the LGBTI community.

UCL Star, a group of activists supporting refugees across the UK, invited three speakers to talk about the status of inequality for LGBTI asylum seekers to raise awareness of the injustice in the British immigration system.

The panel members, S Chelvan, Paul Dillate and PJ Samuels, all had their own personal experience of the British immigration process. S Chelvan, who won Legal Aid Barrister of the Year 2014, opened the panel.

“We aren’t talking about sex, we are talking about the expression of yourself,” he explained. “The issue with asylum seekers coming into the UK is that they aren’t ‘straight enough’ in their own home county. This often results in the British Immigration system telling them to go back to a different location in their country and be more discrete in the future to prevent prosecution.”

Chelvan works primarily with LGBTI asylum seekers and has played a key role in the creation of the Difference, Stigma, Shame and Harm (DSSH) model, which is now used throughout the world in countries such as New Zealand and Sweden.

The DSSH concept was created as a new mode of questioning for refugees who are seeking asylum from their homeland. This was a result of the Stonewall report in 2013, which explored the humiliating questions asked during the immigration process for LBGTI refugees.

It included them having to prove that they were in fact gay, asking if there is a risk of persecution on returning to their own country and whether or not they could be discreet.

In using both a host of legal evidence of the asylum process and anecdotes from his own childhood (during which he discovered his own sexuality), Chelvan showed the audience how the current process for asylum seekers is unjust and could be mentally harmful to refugees.

Paul Dillane, head of UK Lesbian and Gay Immigration Group (UKLGIG), was the next panel member to speak. He talked about the harassment and abuse that some refugees can face in UK detention centres.

Created in 1993, UKLGIG provides legal advice alongside mental and emotional support for refugees, helping more than one thousand people a year.

Detention centres aren’t safe for LGBTI refugees Paul explained, saying that many need to go “back in the closet” whilst seeking asylum.

Seeking asylum is not a crime, however most LGBTI refugees are treated appallingly by the British Immigration system, “these detention centres are frankly prisons” Dillane urged.

The state of these facilities are breaking basic human rights, with many who attempt to seek help from detention centre officials, often being told to once again be more discreet in their behaviour during their time in detention.

The most harrowing speech of the night came from PJ Samuels, a poet and activist originally from Jamaica who had been through the process of seeking asylum. Her experience has left her feeling displaced and unable to assimilate into British society four years after gaining residency.

“I was in detention for 12 days, it was like my life almost stopped then,” Samuels told the room. She added: “When I talk about this I lose the ability to be eloquent…you had to quote your name all the time, the doors are locked…they tell you it’s not prison, I would not want to know what prison is like.”

It’s hard to tell her story without quoting her word for word, the room was left in stunned silence as she explained the questions she was asked, and the graphic statements that had to be written alongside her application.

She confessed that if she had known what the process was going to involve and the trauma she would endure during her time in detention, she wouldn’t have tried to apply. “The process tears you to pieces…to me, I still don’t feel like I belong here,” says Samuels.

The panel drew to a close with a Q&A and a reading of one of PJ Samuels’ poems. All three speakers have a vocal presence on Twitter and regularly campaign for more equality for LGBTI asylum seekers.

You can follow them and UCL Star for more news on their future activism.