The power of Lena

I’m not one to get star-struck.

However, when Lena Dunham came to visit London for a book signing, I nearly pissed my pants with sheer excitement and forgot to eat for like six hours because I was too high on Lena-love.

I stood in line, clasping her book in my sweaty hands. My heart was racing, and I felt like peeing right there on Waterstones’ beige carpet.

“At least then Lena would remember me,” I thought to myself, then condemned my lame thought process and got myself together.

Like I said, I don’t care for celebrities, so why does Lena Dunham have this effect on me and so many other people?

It’s just that Girls is a brilliantly written, funny and relatable show. Us womenfolk haven’t had much relatable stuff on TV before. Sure, we went bananas over Sex and the City. As attractive and blingy as that show was, it was pure fantasy, a conjuring trick of capitalism.

We girls just love our Manolo Blahniks, am I right ladies? As much as it was refreshing to see women talk openly about sex and as much as looking at beautiful clothes was fun, looking back it seems consumerism and materialism was at the heart of the show.

I wouldn’t choose to pit Sex and the City against Girls – the two are extremely different. But I’m forced to use it as an example because there just isn’t a lot of material to compare it to from mainstream TV. The reality of the media is simply that it’s been nearly devoid of strong female stories.

Until now. Now there are a good bunch of shows on TV with female leads: Orange Is the New Black, Scandal, Homeland… the list goes on. 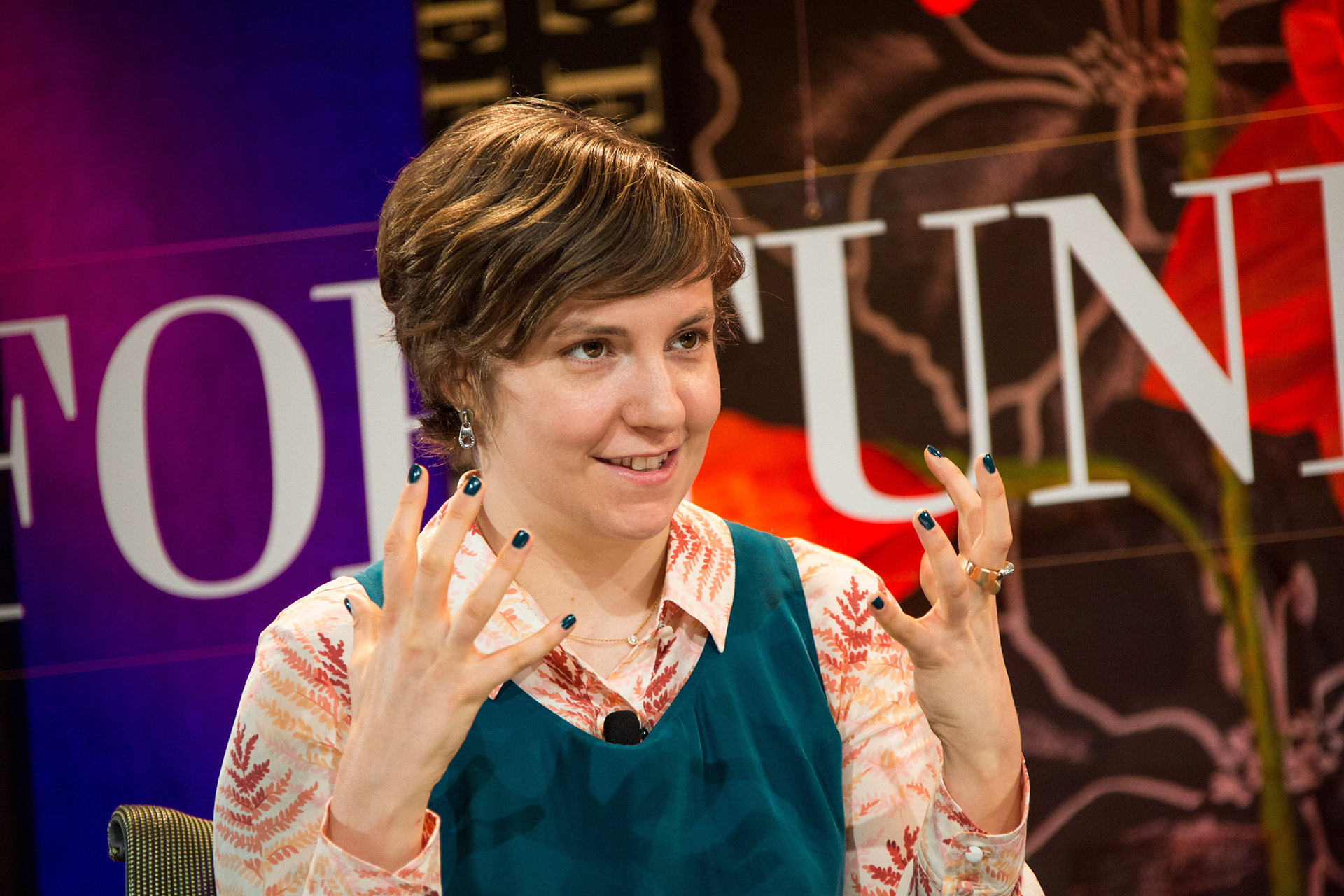 According to the Women’s Media Center, women were faring worse at making movies in 2013 than they were in 1998. Of all the top-grossing movies of 2013, women accounted for only 16 per cent of the writers, directors, producers, executive producers, editors, and cinematographers.

When you consider that most of those female speaking parts on TV and film are written by men, we’re left with a strange portrayal of the vagina-kind.

Gender Bias Without Borders is a recent study made by the Geena Davis Institute On Gender in Media at USC’s Annenberg School for Communications and Journalism. They looked at 120 films in the ten most profitable film markets globally. The institute held a symposium revealing some alarming statistics.

With very small changes, the ratio of men to women in US film and TV has remained fundamentally unchanged since 1946. Davis commented that if it continues at the current rate, “It’ll be 700 years before we reach parity” in U.S. media. 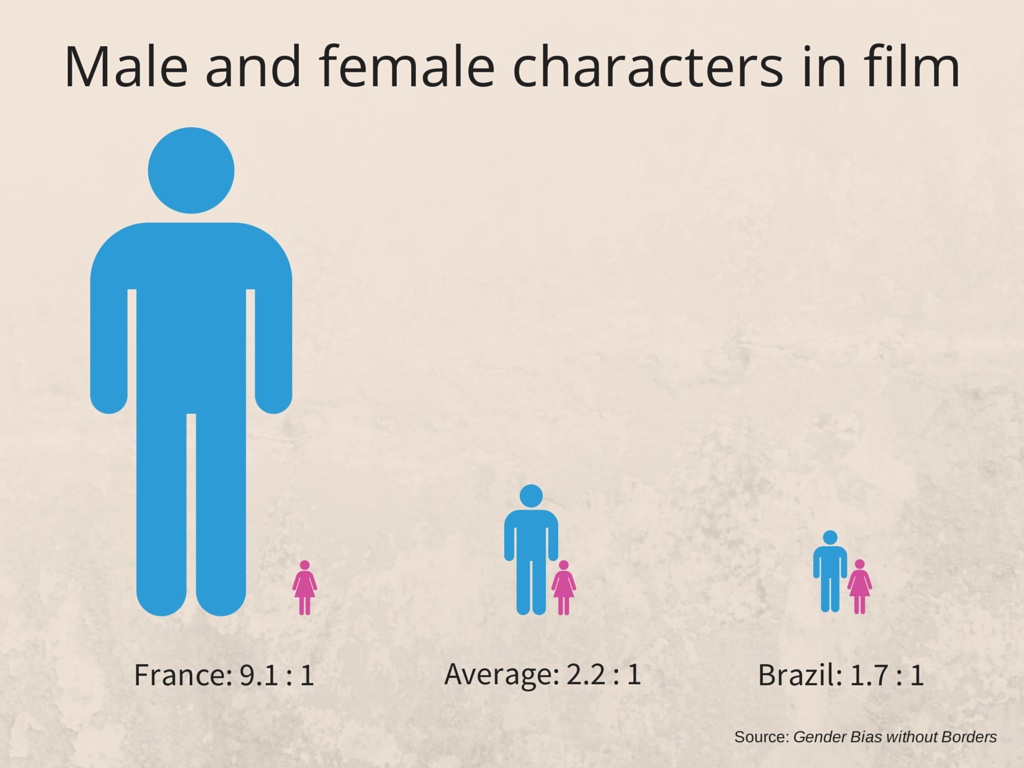 They also looked at the men to women ratio around the world and found that globally there are 2.24 male characters for every one female character.

Try the Bechdel Test for movies – and try to keep it in mind for the next few films you watch. If you’re not familiar with it, it’s a really simple test to measure the female presence in a film.

Anita Sarkeesian explains it brilliantly. We’re so desensitised to the marginalisation of women in media that we barely notice it without someone telling us.

Tess Sheridan, senior lecturer at the MA Screenwriting course at London College of Communication says: “Regarding the lack of female-centred screenwriters and directors, this is related to the lack of female stories being filmed.

“Those in power – mostly male, white, middle-class – like to see their own lives, histories and priorities reflected in the narratives they enjoy. The female characters we do see in mainstream Hollywood tend to exist on the axis where men engage with them – i.e. when young, attractive or doing something that involves or supports or reflects men (wives, pole-dancers, cheerleaders, nurses, girls next door).

“Those in power – mostly male, white, middle-class – like to see their own lives, histories and priorities reflected in the narratives they enjoy.”

“Lena Dunham et al. have burrowed straight into this black hole that is women’s lives away from men and shown that it is, of course, of interest. Once this interest starts to translate into hard cash the studios take notice. As for female directors, we have it tougher and get fewer brownie points for being tough in response.”

Some, when confronted with facts about gender inequality in culture will instinctively say: “Why don’t women just go and write their own films and TV-shows then? Stop complaining!”

The problem is that when they’ve been fed these stories devoid of women all their lives, a lot of aspiring female writers think of Hollywood and go “nope, there’s just not room for me there.”

Or they simply think no one wants to hear their stories, that what they have to say wouldn’t add anything of real value to culture.

Others will try, but have to pitch their stories to rooms full of old dudes with no sympathy for their narratives.

So when someone like Lena Dunham makes a show like hers, it rocks the boat. For some it’ll rock the boat a lot, making them feel like their stories are worth sharing, that there’s actually an audience and appetite for their work.

Those who don’t want the boat to rock tend to get extremely angry at Ms. Dunham.

Seems like there’s hope to unlearn what we’ve been force-fed.

She’s received an absurd amount of scrutiny over her show, from accusations of racism and privilege to criticisms of her having the audacity to get naked without being thin. I’m not saying that she should be immune to criticism, but the amount and scope of which she’s received has been hugely disproportionate, and is rarely experienced by males of the same standing.

The language used to describe her is often saturated with sexism, and insidious ways to try to insult her. Radio star Howard Stern described Dunham as “a little fat girl who kinda looks like Jonah Hill, and she keeps taking her clothes off, and it kind of feels like rape.”

It goes without saying that Jonah Hill whipping his kit off won’t leave anybody commenting on his body or suggesting that watching him “feels like rape.”

Dunham handled the comment with sass and class, Stern has since apologised and admits he’s obsessed with Girls. Seems like there’s hope to unlearn what we’ve been force-fed.

But Stern’s nasty words pale in comparison to the sexual abuse allegations made by Truth Revolt. Truth Revolt have previously published articles with lovely titles such as “Real Rape vs. Rape Culture” along with good old panic-mongering pieces and suggestions that Obama is the spawn of the devil. 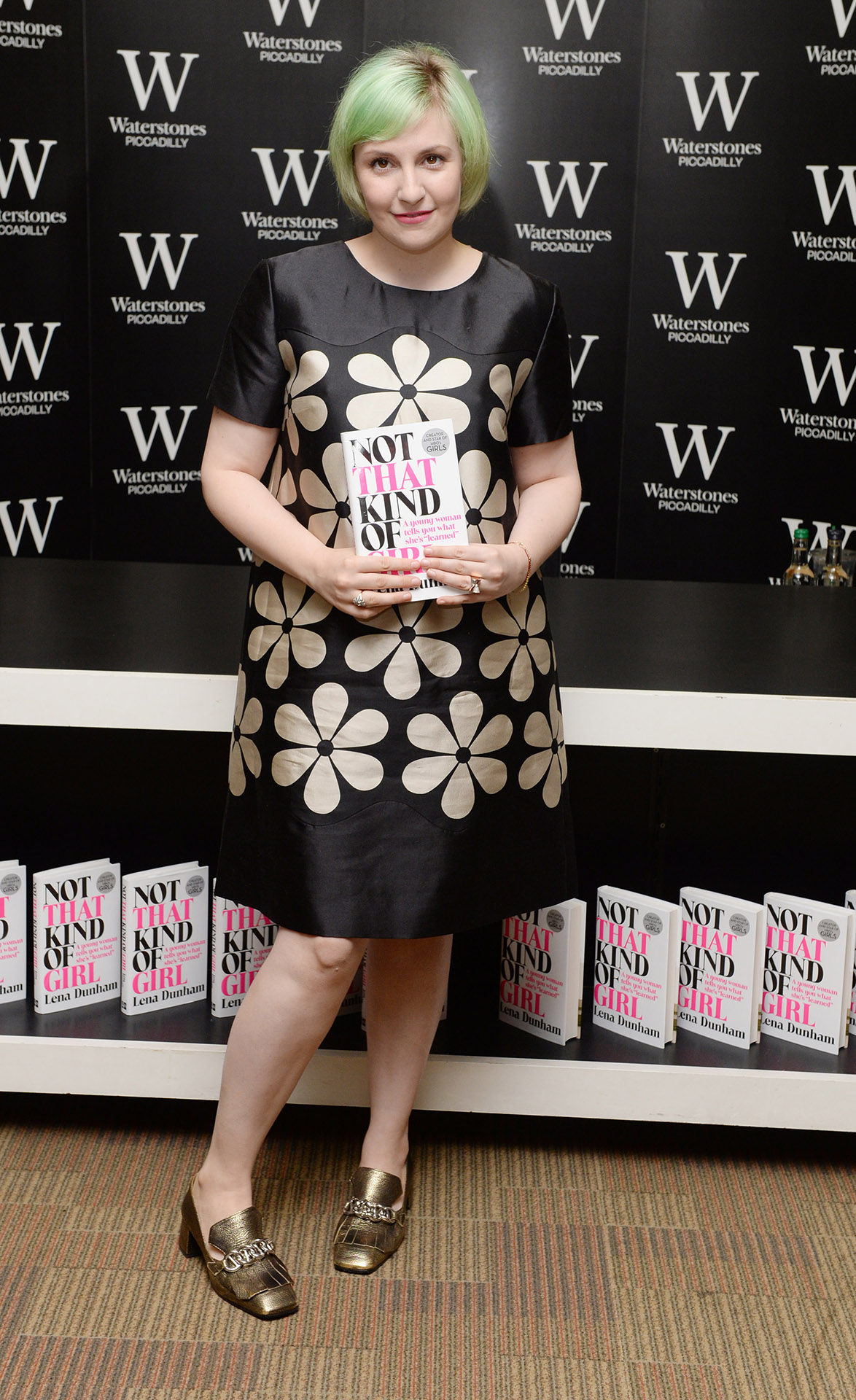 Dunham at Waterstones Piccadilly for her book signing.

You get the idea. What’s interesting is that these comments and attitudes towards her are seen across the political spectrum.

Maybe the patriarchy is just beginning to shake. Some caricatures I’ve seen of Dunham remind me of the ones drawn to try and discredit the suffragettes.

When it came to my turn at the book signing, I asked her what she thought of having her words twisted and used against her.

This was just a couple of days before the Truth Revolt sensationalism surfaced, with Lena subsequently cancelling the remaining dates on her European book tour.

She shrugged, signed my copy and said, “I can’t control what they write, I can only control what I say. Next.”

That’s my girl. Sticking it to the man.

Then it was over and it reminded me of what screenwriting lecturer Tess Sheridan said: “Even these days we tend to lag behind men in confidence. We have to go it alone, uphill, and for many the effort is difficult to sustain. It’s changing, but at a glacial pace.”

Not if Lena Dunham’s got anything to do with it.