Glen E. Friedman’s My Rules brings US subculture to life 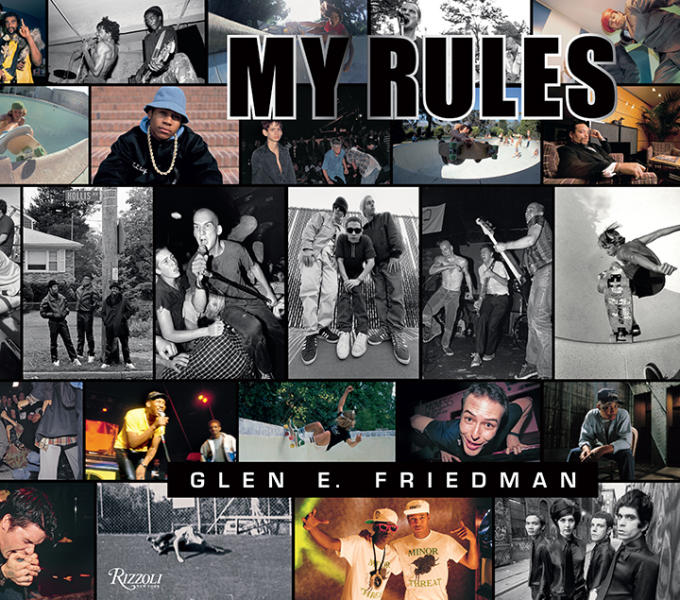 No photographer has captured the golden age of punk, hip-hop and skateboarding quite as well as Glen E. Friedman. From the late 1970s through to the mid ’90s and beyond, Friedman has been at heart of the most versatile scenes in the US.

Friedman’s new book, My Rules, showcases some of his unique and iconic photos from the emergence of hip-hop in the ’90s. The contemplative expression of Public Enemy’s Chuck D staring down the barrel of the lens, sat in a shadowy prison cell. Portraits of a baby-faced LL Cool J donning a chain and pastel blue bucket hat. Run-DMC hanging off a wall teemed with graffiti somewhere in NYC.

Not only that, but Friedman caught onto the kinetic energy and vivacity of legendary hardcore bands Fugazi, Black Flag and Bad Brains. Capturing the raw power of their early shows through stark monochrome shots. One in particular that stands out is half-naked Henry Rollins gargling a microphone in his mouth, screaming like a madman.

Another component running through the book is the early days of skateboarding. Intensely saturated photographs of skaters Jay Adams, Tony Alva and Stacy Peralta up in the air, using drained pools as substitute half-pipes. You can even see a young, sandy blonde Tony Hawk in ’84 on Friedman’s website.

It’s an amalgamation of three vital sub-cultures rolled into one badass book, basically. An exhibition of Friedman’s work is taking place over the next couple of weeks in central London. If you check it out you’ll find more than 50 shots, some which haven’t been showcased before, such as rare photos of Ice-T and Ian Mackaye.

Friedman’s exhibition is at 14 Henrietta Street in Covent Garden, running until January 18, 2015. You can buy a copy of My Rules at rizzoliusa.com.