In London there’s an active network of people who explore the city, from the highest heights to the deepest subterranean levels.

On a brisk autumn day I’m shown around by my personal London tour guide Scott, a young chap whose words aren’t anchored to his age, but reflect the kind of wisdom and gusto you’d expect to hear from an iconoclastic, freight-hopping hobo.

Our aim is to see views of London City from locations that are seldom frequented – places that often warrant visitors getting nabbed for trespass.

The term that’s been coined for what people like Scott are up to is ‘Urbex’, an ingenious portmanteau that was probably invented by the same literary saviour that gave us ‘vajayjay’ and ‘frape’.

For most of the coterie of urban explorers, the activity is of personal value and the comprehension of their activities to those outside of it is irrelevant.

Scott leads me by bike to an east London council estate, not far from the city’s EC2 postcode. As we lock our bikes to the railings outside, a resident from the 27 storey block approaches the main door.

I’m drawn into a fake conversation about an imaginary friend that lives inside the block, and as the tenant taps his key against the electronic door-lock we pass into the building after him, still chatting about our non-existent friend who won’t pick up his phone to let us in. 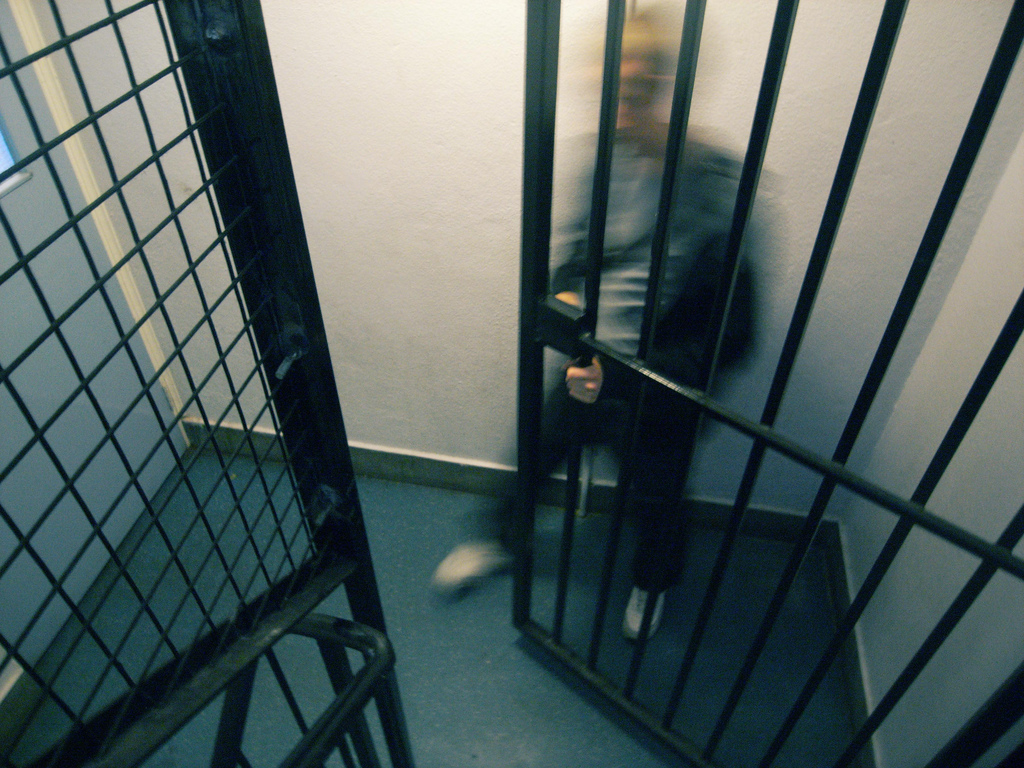 Going where only burglars, junkies and janitors go.

The attraction for the exploration of a monolith of social housing is born out of its architectural characteristics.

Rising high above the city, much like the Orwellian skyscrapers of the financial districts, the structures provide the best views of the city, allowing its guests to take unique photographs.

For those within the close-knit circles of explorers, photography is to some extent a shared goal; the documentation of these places is the only intervening action between the individual and the immediate space.

We leave the elevator at floor 27 and take the stairwell up one more level. Daubed in a red dry-wipe marker, which was probably lifted from some 15 year old’s classroom, are bubble letters and Disney cartoon characters, the inevitable ‘man-smoking-spliff’ drawing and other recognisable sports logos and rappers’ names.

Of course we aren’t the first people to skulk around in this corner of the building, where traces of activity and drug-abuse are in abundance.

This, however, isn’t our last stop. Scott pulls out a set of janitorial keys and swings open the steel door to the rooftop where we’re exposed to the metropolitan landscape of London Town.

Treading carefully around the roof so as to not arouse the suspicion of the occupants below us, Scott points out the many other high rise buildings around the city that are regular haunts.

With the acuteness of a seasoned birdwatcher, he begins easily identifying the different blocks by name and locality, from Balfron Tower to Aylesbury Estate, all of which come with their respective tales of delinquency.

Scott tells me about crews of locals bunning spliffs at the top of tower block stairwells, discussing in localised slang about ‘some man’ who’s ‘gonna get tucked in’ while he’s hidden on the other side of the door, and stories of Bond-esque ‘elevator surfing’ for free thrills. It sounds like these visits often bear witness to some haphazard affair. 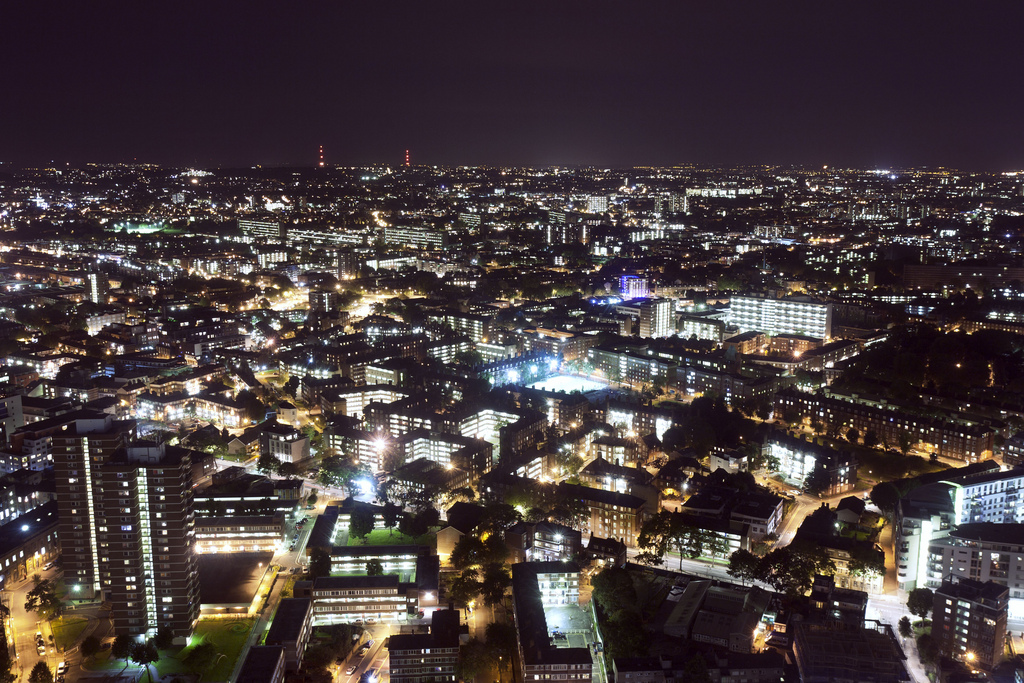 The compartmentalised London estates lit up in the night sky.

“With a bit of effort anyone can come up here, but they never do. These places are pretty much open to visit and they should be. Finding these places is how I make sense of the city and by exploring these places you’re exposed to varying walks of life,” Scott tells me.

For Scott the action of finding the elusive views and secret spaces of London runs side by side with the ability to articulate a certain understanding of societal aspects of inner-city life.

Council blocks, tunnels and transport networks all contribute to a clearer comprehension of how things function. But this isn’t solely about why a dystopian metropolis has shat out ‘no entry’ signs and three-prong fences, it’s about the intrinsic curiosity of human nature: ‘what’s behind that door?’, ‘how do I get down there?’, ‘what’s up that ladder?’ Sometimes it’s just nice to know ‘what’s over there’ rather than allow your understanding of things to hit a brick wall of presumption.

It’s not only the rooftops that you’ll find Scott peeking over to double-check the resident caretaker isn’t on his tail or the police aren’t pulling up at the front door. It’s below the ground you’ll find him as well. 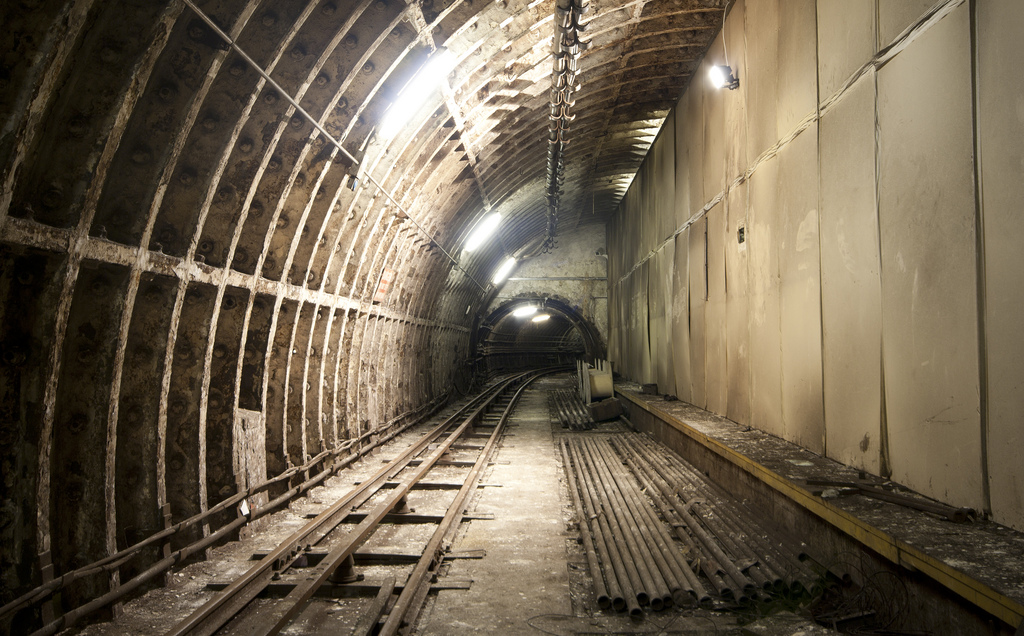 Inherited from the Victorians, London’s underbelly consists of a multitude of hidden labyrinths and tunnels, many of which have been traversed by Scott and his merry band of modern day explorers.

While they don’t provide the same sweeping cityscape views, they’re deemed the veins of the city. Because they’re difficult to reach, the real Gs of Urbex are revered for entering them.

The way they’re accessed remains sacrosanct amongst the people who do it, as Scott informs me: “I guess it is quite nice knowing you’re one of the very few people to ever see this … not that anyone shouldn’t be able to see it.”

We continue to seek out more rooftops. As the day gets later, we find ourselves pushing our piece-of-shit bikes back to South London in a bid to go up one last tower block.

The highest yet that day, the view is expansive; the surrounding alleys and thoroughfares lit up by the tungsten street lamps; London’s glittered skyline resembling an air-sprayed hoodie you’d cop at a Puerto-Rican state fair.

The thing is that many of these high-rise blocks are slowly but surely being replaced with expensive inner-city pads. With the demolition of the Heygate Estate, the precedent has been set for an impending urban renewal.

The landscape of the city is changing and its oldest foundations are being closed off, but there remain those who will seek to explore its fabric come what may.

What makes Scott’s photographic work profound is the documentation of these places that are rarely witnessed, notwithstanding that in years to come will hold its validity as a record of the city’s architecture and the conditions of society that occupy it. 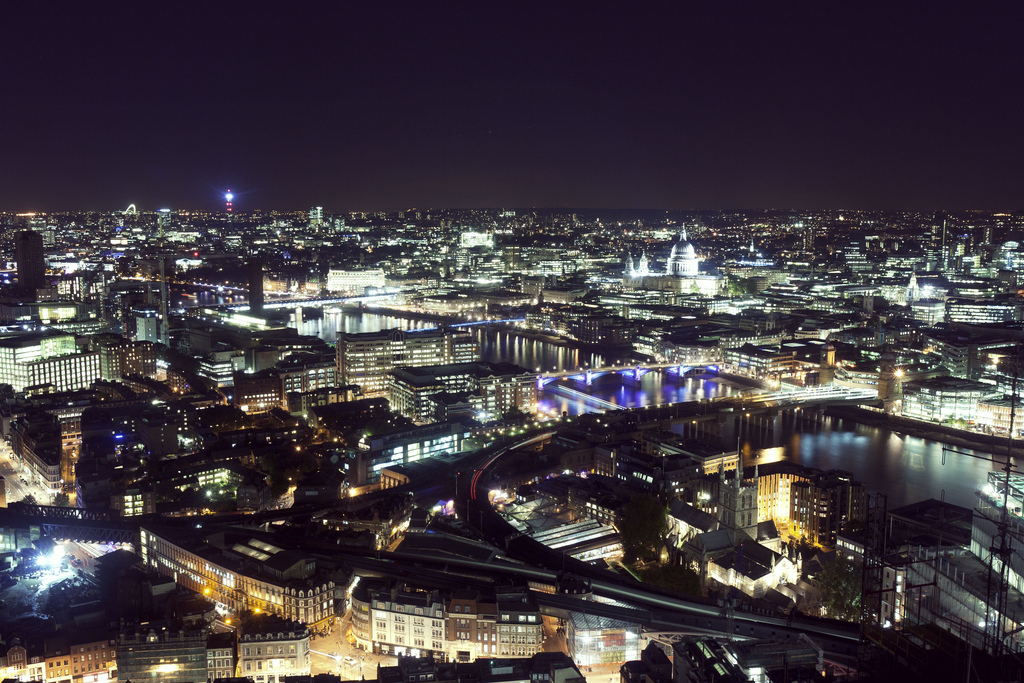 After half-an-hour of taking photos, absorbing the view (which was great apart from the semi-naked bald fellow we could see lavishly smearing marmite over his dinner in the adjacent apartment block) and discussing how joyous it would have been to have brought a laser pen with us, we locked up the doors on our way out and took the rickety, vandalised elevator back to the ground floor.

As we exchanged a few more anecdotes on casual trespass, security guard chases, abandoned mental hospitals and accidentally derailing a locomotive over a carton of guava Rubicon and a rollie, I observed the noise and franticness of life on ground-level compared to the peacefulness up there on the roof.

For the explorers, a crowbar or a pair of bolt-cutters doesn’t just break a fence or door; they break the cycle of everyday life and offer places that can provide peace in a rapid, unresting civilisation.

The time has come to bid farewell to my trusty locksmith-meets-Kerouac-meets-Ray-Mears compadre.

With one last toke and the ritual popping of the cardboard carton on the ground, we go our separate ways, the sound of spent wheels squeaking off into the concrete jungle.

All photos courtesy of Scott via infinityisnow.co.uk