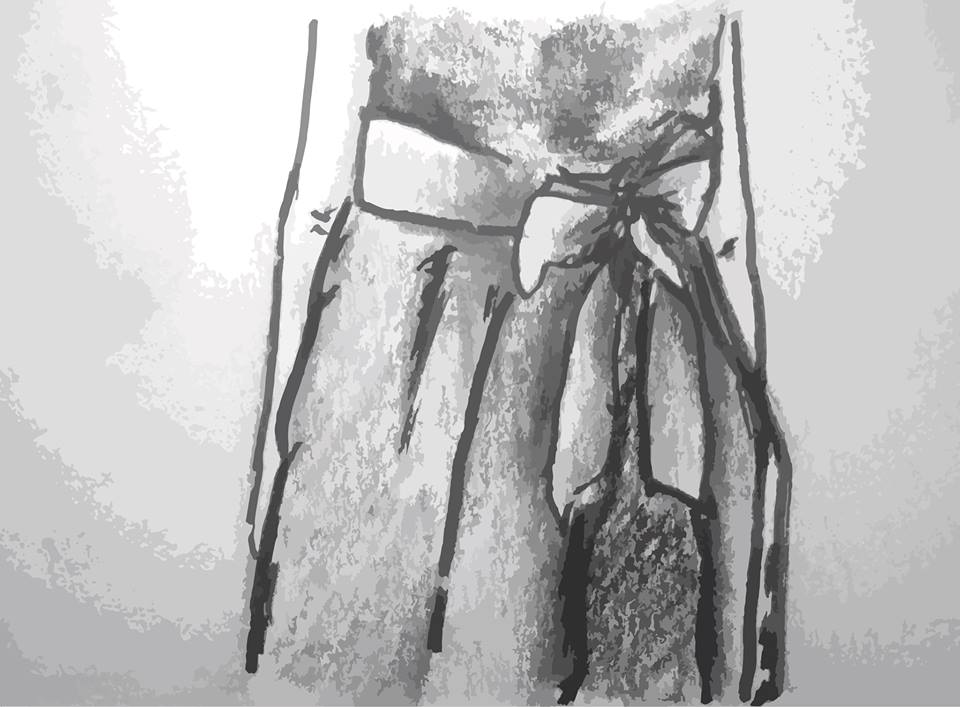 The humble kitchen apron is having a renaissance. It’s not just a cooking tool – it’s a fashion statement.

One of the earliest prototypes of the pinny is usually thought by fashion historians to have been the clothes of medieval monks. But there are those who disagree and claim that the apron has its roots in the Garden of Eden. For fig leaves, worn by Adam and Eve, are often believed to be the kitchen apron’s ancient forerunner.

Whatever their origin, one thing’s for sure: the mother of all kitchen aprons was a necessity.

Once upon a time people had no washing machines. Housewives would go to great lengths to avoid stains (good luck handwashing a multi-layer gown). It was deduced that if stains were unavoidable, you might as well have an easier way to clean and dry protection layers.

But uses for the apron were a lot broader. It served as a conveyor, for when you had to bring home some pears from the orchard, carrots from the garden, eggs from the coop or wood from the shed. Much like a Transformer it would transfigure into a rag (to clean dust off the table), a hanky (for wiping off onion tears), a towel (to mop a sweaty forehead), an oven glove (to handle a piping pan) and even a hideaway (the more shy offsprings would take cover underneath mother’s apron).

In the 20th century, the perfect housewife’s best friend became pretty, too. In the ’20s and ’30s aprons were cut to resemble a dress – the hemline was low and the waist untailored. The waistline would only get narrowed in the ’40s, when the more daring designs – embellished with ribbons, buttons, colourful pockets – first started appearing. 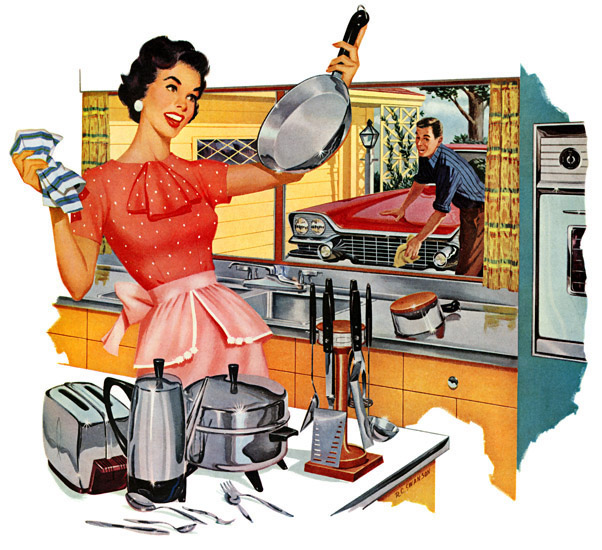 Several years later the apron dernier cri was an apron-meets-pinafore variant, with a decorative ribbon for special occasions.

Then it was time for the ’50s and along came the soaring popularity of the television and its family shows, which imposed the image of ‘The Perfect Housewife’ onto entire generations of impressionable – unaccustomed to the new medium – women.

Allusive as it is – the fantasy image of a mother, wife and homemaker – she would always have her apron on. Not just in the kitchen anymore, the domestic goddess would wear it all day, by the ironing board or the linen drying rack.

But the apron’s five minutes of fame wasn’t limited to the telly. The new invention of the glossy magazines and their advertisements would eagerly refer to this figure of a voluptuous housewife, welcoming her husband at the threshold with a steaming casserole. Of course, the glamorous homemaker – apart from the high heels on her feet and a string of pearls around her neck – would always have a chic apron flung on.

In the ’60s, however, the apron became a figure of persuasion – a device for political manifest. It was then that they would have humorous prints, think “Kiss the Cook”, but they would also be tools of feminism, like “For This I Went to College”. The messages from the aprons were a reflection of the then-emerging second-wave feminism movement.

However, when the women began working, the apron became the symbol of home oppression, losing any positive connotations. Kitchen aprons would be a conventional contraption until the ’70s and the ’80s. They receded from view, only to make a fashionable comeback. There is a reason why the Apronology series was released – it’s a yearbook completely devoted to the subject of pinnies: they are hot stuff.

Betty Draper in Mad Men, Nicole Kidman in The Stepford Wives, Bree Van De Kamp in Desperate Housewives, Meryl Streep and Amy Adams in Julie and Julia – what do all these actresses and characters have in common?

“They’re the ones who have brought about the subject of the humble apron in fashion – and helped turn it into designs to compete with the most smashing frocks,” says Malgosia Swierczynska, who two years ago launched the online store Ilookandcook.pl, dedicated completely to the notion that being in the kitchen doesn’t have to put good looks on the back burner.

Cinema, TV and the craze for vintage fashion have sparked off the interest in retro aprons: vibrantly-coloured, with floral prints, girly-feminine cuts and frills. Designs by Jessie Steele, one brand that has been taking the industry by storm, are a delight to watch combine vintage with modernity.

Like the cherry cupcake-bestrewn apron, worn by Charlotte York in the movie adaptation of Sex and the City, the brand has also been featured in the likes of Desperate Housewives or Rockefeller Plaza 30  – not to mention the stars who have taken a liking to the endearing designs – like Jennifer Aniston, to name one. All this helped make Jessie Steele a worldwide brand – selling their products in well over 30 countries.

But there are other apron-maven brands with a much longer and more grand history. Like Ulster Weavers, an Irish kitchen accessories producer. Founded in 1880, the company does have something to boast about – for almost 20 years, it has been providing kitchen textiles to The Queen and Royal Family. There’s a fair chance Kate Middleton prepares little Prince George’s babyfood in an Ulster Weavers.

The practical domestic sphere aside, kitchen garments have also been inspiring material for the high fashion world. Apron-alike designs have appeared on catwalks at Dolce & Gabbana, Alexander Wang and Marc Jacobs.

Some designers, though, have an even deeper connection with the humble overall. It was the apron that the Swedish fashion brand Akris made exclusively at first. Founded in 1922, a family-run business would only produce and sell plain polka dot-spotted aprons – only then to move on to fashion and eventually become a luxury item, with its collection shown at Paris Fashion Week.

The apron craze is roaring in the UK – there are plenty of places to get yourself a unique model with quirky, new designs. Ones to have on watch are definitely collections from Larklin from London or Posh Pinnies from Kent, who are selling aprons so fabulous you could easily wear one to the ball.

Unaffected by the flower-printed, sugar-coated designs remain professional chefs, amongst whom less bombastic designs take the lead. Like the “butcher”: long, with a belt to tie around the waist, simplistic and austere, most likely made from denim, leather or canvas.

One of the hottest brands specialising in minimal, raw bespoke apron-inspired forms – those aimed at the professionals – is a Los Angeles based Hedley & Bennett.

The designs from under the pencil of the youthful Ellen Bennett have graced themselves upon upmarket cookers – with chefs like Thomas Keller, David Chang and Grant Achatz working in them. But it’s not just the chefs – Bennet’s pieces are also favoured by painters, sculptors or tattoo artists.

The professional ‘gastro’ world has also taken a liking to a Canadian brand Blunt Roll, which owes its mainstream success to its popular leather apron (priced at €190). Hand-made Blunt Roll designs are proper artisan craft – elegant, smart, distinctive. Each piece comes with a leather pouch for safely storing even the sharpest of kitchen blades. The brand has devoted fans such as American celebrity chef Andrew Zimmern and Maynard James Keenan, a heavy-metal vocalist.

Heaps of overalls with quotes from Anthony Bourdain to Gordon Ramsey are to be found on Ebay or Amazon within a couple of clicks. But the people doing PR for Paul Bocuse went a step further and labelled the entire collection of kitchen knives, gloves, pans or aprons after his last name.

“For years I’ve been faithful to white and navy pinstripe aprons,” says chef and restaurant owner Tiko Tuskadze, whose Little Georgia remains one of Islington’s best hidden of gems. He continued: “I remember being quite fond of the clothing choices of Xabier Gutiérrez, creative chef at Arzak in San Sebastian – he would come to work in a sweatshirt dyed all over with a rainbow of multi-coloured paint. The more creative the kitchen, the more things like this matter,” rounds off Tuskadze; me nodding, while my mouth is stuffed with khinkali – a type of delicious dumpling. When talking to chefs, two brands seem to lead the pack: Denny’s and Le Chef.

“I’ve lived and worked in UK gastronomy for a while and the pinstripe design is preferred – both among the Michelin-starred celebrities and fish & chips street vendors,” adds Tuskadze as I can’t stop myself from another helping of his fabulous khachapuri, a Georgian cheese-filled boat of bread baked with an egg on top.

“I’m fussy and have high expectations. It’s all changed: the cooks are no longer confined to the kitchen, or left alone. Now everyone notices what you look like. The chef’s attire must cohere with both the concept of the restaurant and the personality of the chef himself.

Turning aprons into fashion statements has been a big thing in the UK – if only the humble overall got more spotlight in the media. Regrettably, we don’t get much an example to follow. The cooks on the telly are always being dressed off duty-style. Perhaps, it’s time for Gordon Ramsey to stop asking other people to remove their aprons and start wearing one himself.