Japanese culture is popular for many reasons – whether you’ve spent countless hours playing Nintendo, bought sushi for lunch at Wasabi or wept over Studio Ghibli classics like Spirited Away and Princess Mononoke.

The latest trend from Japanese culture that’s made its way to the UK and other parts of the western world is kawaii fashion.

Most people will have heard of the word ‘kawaii’, whether you closely follow internet culture or heard it from Avril Lavigne’s controversial song Hello Kitty.

In modern Japanese, kawaii translates simply as ‘cute’. That definition still holds true in Japanese fashion but acts as an umbrella term for the myriad of alternative looks that grace the streets of Tokyo, Osaka and Kanagawa. 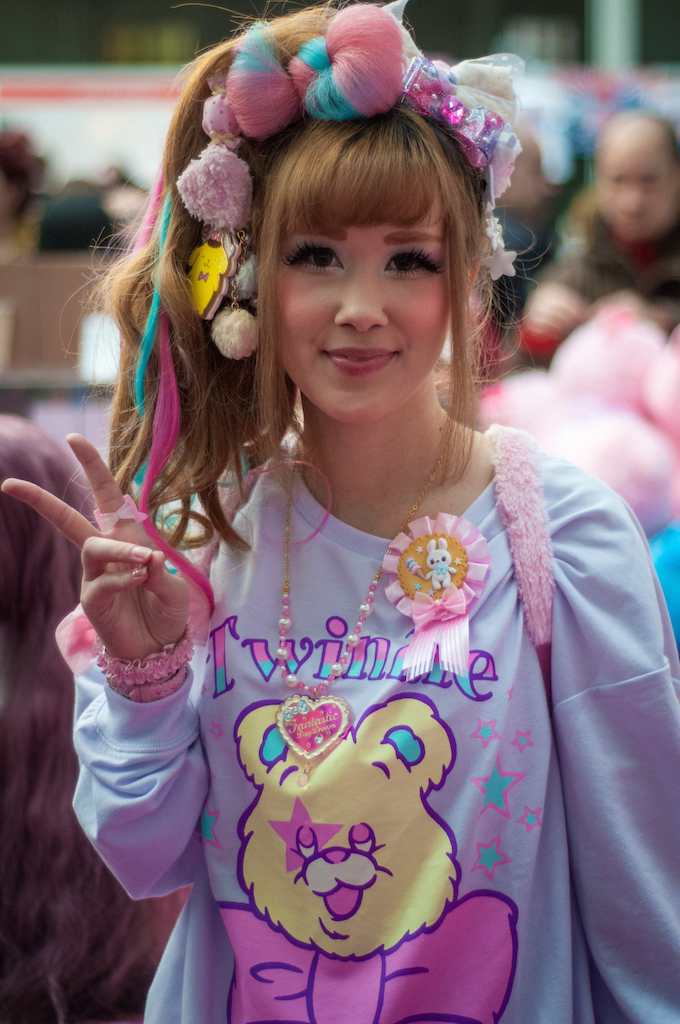 At HYPER Japan, we attended the J-Style Collection fashion show which displayed a variety of what Japanese fashion has to offer.

It hosted a motley of styles hailing from different subcultures, all with a distinct history.

With kawaii style, clothes and accessories are key in achieving the look, however, make-up is just as important.

The kind of make-up that’s really popular amongst Japanese culture is a really soft, pink, and girly look.

They use a lot of pink and peachy colours on lips and cheek. Not to forget there’s a prominent use of false lashes and vibrant circle contact lenses to make the eyes appear big and round.

A make-up artist at the event, who was recreating the kawaii make-up look for attendees, acknowledges the difference between western and kawaii make-up: “In western cultures, more people want to look glamorous, whereas Japanese girls want to look innocent and girly.”

This was evident on the catwalk, as the girls glided onto stage with doe-eyes, blushing cheeks and soft coral lips.

These were matched with pastel ‘Little Bo Peep’ style dresses, trimmed with lace to give it that ultimate doll-like look. This look is known as Lolita kei, which can be outfitted in different ways: sweet, gothic or classic.

A classic Lolita palette consists mostly of creams, beiges and muted floral prints, usually accessorised with flower brooches and headpieces that ooze antiquity. The hair is softly curled to give it that ‘Aurora from Sleeping Beauty’ style.

Of the many kawaii styles that’ve been adopted from Japan here in the UK, the most prominent is the Lolita kei, a style which appeared in Japan around the end of the 1980s and was first documented by photographer Shoichi Aoki in the street style magazine, Street. 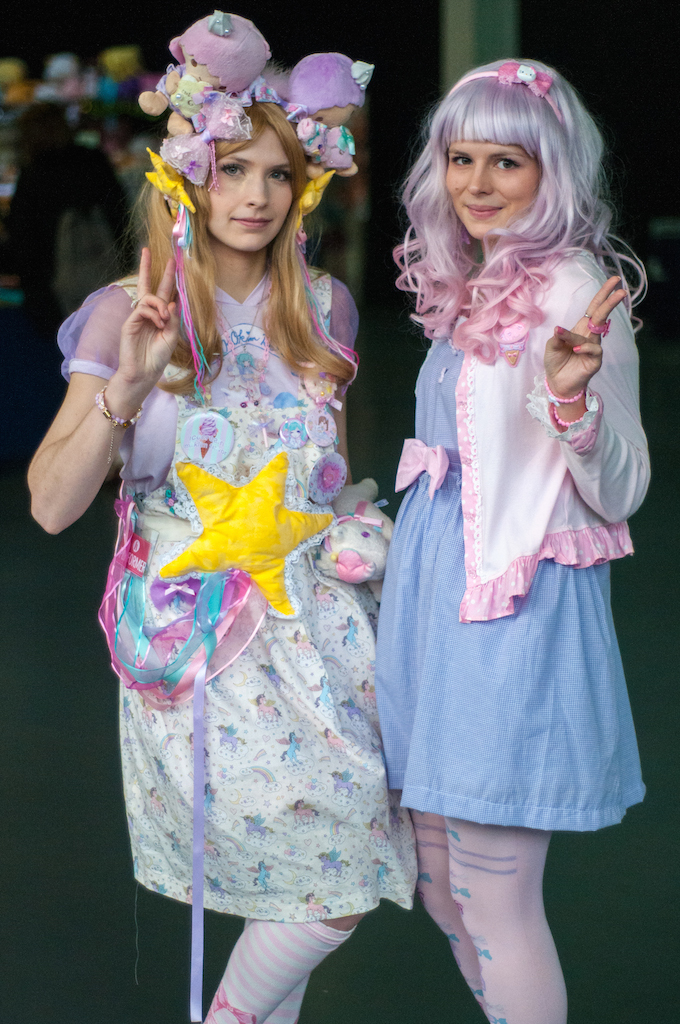 Lolita kei style takes inspiration from the 19th century. In the UK, followers of the Lolita kei style don’t necessarily heed to the ‘return to innocence’ aspect of the trend, which sets the UK’s adaptation of the style apart from Japan’s.

Here in the UK, women dress up in frilly frocks to show off their kawaii alter-ego, one unseen in their day-to-day life.

Some people may be a tomboy most days, but once they’ve donned their pastel dress, applied their perfect rose makeup, and curled their hair – they’re transformed with the touch of a fairy godmother’s wand.

Notably, the UK fans of J-Style often prefer to make their own kawaii outfits as opposed to importing typical Japanese designers or clothing.

Further adaptation of the Lolita kei style, Sweet Lolita kei, is slightly wackier, with bubblegum pink dresses printed with images of delightful treats – ice cream, slices of cake, you name it. The hair is larger, usually styled in pig-tails decorated with several bows.

Gothic Lolita opts for a more steampunk look, with black ruffled Victorian blouses and often fuses traditional Japanese kimonos with the ruffled layered dresses which is an alluring twist on the classic Lolita kei.

Similar to Gothic Lolita is Aristocrat Kodana, which definitely uses elements of the steampunk subculture with cropped trousers, ruffled blouses and tailored waistcoats. This can be worn by both men and women, giving it an androgynous and grungy look.

Outside of the weird and wonderful world of fashion at HYPER Japan, there were also a few stalls selling Japanese beauty and make-up items. We saw everything from, stencils for applying eyeliner and blush properly, to bath salts containing cayenne pepper to help you lose weight. 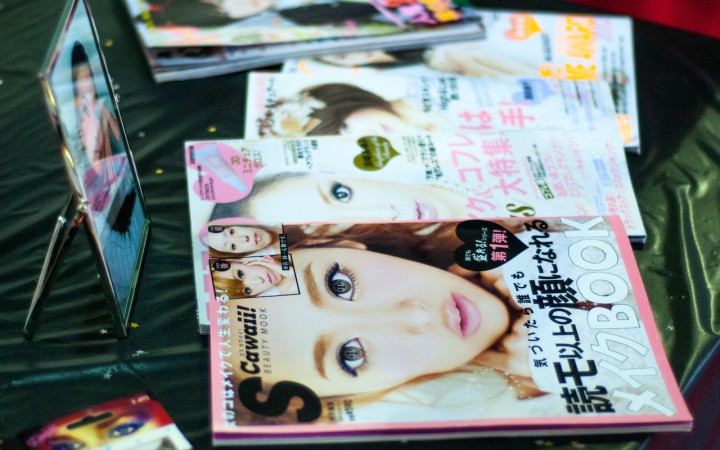 She told us there are some very specific criteria applied to the Japanese beauty industry: “You find that Oriental and particularly Japanese washing, bathing and cleansing are more about ritual and [is more] spiritual. So, it’s not just a quick wash, get ready and get out the door. It’s spending the time and also enjoying the process of cleansing.

“The Japanese beauty industry has a lot more products that are really gentle to the skin, and extremely luxurious. Europeans, and being one myself, we tend to have just a quick scrub to get ready and out the door. The Japanese are all about the whole experience.”

Bogodlska also believes that they’re very innovative: “Their products are very modern, but they’re still based on centuries of tradition. But a lot of products use modern fabrics to maintain cleanliness and hygiene…the Japanese are very much about hygiene, about fighting bacteria. That’s why they use new products, new technologies and are constantly updating beauty products. It’s all rooted in the traditional idea of cleansing [and] spiritual bathing but ensuring it’s all very clean and safe.”