This is a guest post by Paul Charman, the former director of the BA Journalism programme at London College of Communication and principal lecturer on the history of the liberal press and J.S. Mill.

Je suis angry. Je suis even spitting blood with rage. Je suis horrified by the barbaric execution of fellow journalists in the transplanted Jihadi war that has come to Europe. But am I really “Je suis Charlie”?

Indeed, is this publication anymore “Je suis Charlie” than all the British national newspapers who, despite their front pages and editorials declaring solidarity with the Parisian cartoonists at Charlie Hebdo, satisfied themselves with merely reporting the offence rather than repeating it? This was, in my initial surge of anger, my first call to arms, a view echoed by former Tory Shadow Home Secretary David Davis on Question Time.

Much like the Danish cartoon crisis of 2005, not one image was reproduced in Britain, either out of fear for the safety of more journalists who might suddenly find themselves looking down the barrel of a gun rather than their computer screens, or from a desire not to offend.

Either way, according to every precept we know and cherish about free speech, as set out so brilliantly more than a century-and-a-half ago by John Stuart Mill “all silencing of discussion is an assumption of infallibility” it is hard not to register this wilful ‘no draw zone’ as moral failure.

If we really are Charlie, then we should do what Charlie Hebdo did, together and as one to demonstrate our defence of the principle.

Not to weasel out of it as did The Guardian, so famed for sitting on the fence when the crunch comes, ploughing the liberal middle way.

The key point is this:”, they say in their editorial of January 9. “Support for the magazine’s inalienable right to make its own editorial judgments does not commit you to echo or amplify those judgments. Put another way, defending the right of someone to say whatever they like does not oblige you to repeat their words.”

Well, it does when they die for it. 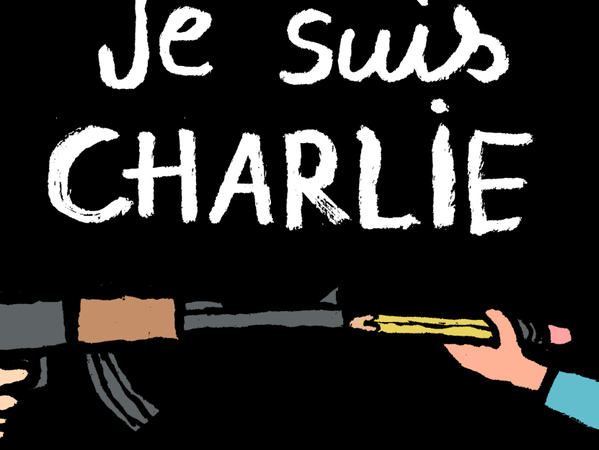 Perhaps even more reprehensible are the tabloids whose blow-hard columnists, while perfectly prepared to fuel the fires of bigotry and hate by blaming ordinary Muslims  – “There are aspects of Islam, I suspect, which are wholly unacceptable to the majority of The Sun readers. The demeaning of women…the treatment of gays”, wrote Kelvin MacKenzie in The Sun (January 12), that great champion of women – were no more prepared to show us what all the fuss was about, and thus be guilty of “that quiet suppression of part of the truth, that is the formidable evil.” (Mill again).

The wider point, of course, is that the whole area of freedom of speech, in Britain as everywhere else in the world, is riddled with hypocrisy and Orwellian ‘double-speak’.

Politicians and pundits might declare our commitment to freedom and expression, and cite our long tradition of lampooning power and belief, from Gillray’s defecating King George to Swift’s Modest Proposal that the starving Irish eat their own children, from Philip Zec’s wartime cartoons in the Mirror which so angered Churchill that he wanted to close down the paper, to today’s Steve Bell, whose depiction of Prime Minister Cameron as a ‘prick’ clothed in a contraceptive offends almost daily.

But everywhere Mill is confounded. As well as the most draconian libel laws in the world – remember “ridicule, hatred and contempt”, our national broadcaster, the BBC operates strict editorial codes against “offence”, as does the commercial regulator Ofcom, and now we even have “hate speech” laws criminalising any abusive communication intended to “harass, alarm or distress” on the grounds of  race, nationality, colour, ethnicity or sexual orientation.

To top it all, if Home Secretary Theresa May’s new anti-terrorism powers to “regain” lost freedoms of the spooks are enacted, it would make this university and others who teach it liable to a visit from armed plod for lecturing about Franz Fanon, with his gospel of justifiable violent revolution in post-colonial countries. Not to mention the teachings of Karl Marx and class war!

Internationally, the question of double standards became obscenely apparent on the world stage on Sunday in Paris when the leaders of Turkey and Egypt and other countries with equally foul reputations for imprisoning citizens who dare to speak their minds linked arms with the leaders of the ‘free world’ at the front of the three million plus demonstration of solidarity with Charlie Hebdo.

Amid all the righteous chorus of disapproval, one is tempted to recall Christ’s own prescription “to look to the mote in thine own eye.”

Then perhaps we could all say with better justification “Je suis Charlie”.

By Oriol Escude
4 Mins read
The imprisonment of singer Pablo Hasél sparks violent protests in Barcelona. Thousands of young people have taken to the streets to protest over freedom of expression.
Politics

By Alice Grahns
5 Mins read
The Investigatory Powers Act has come into effect in the United Kingdom, so Artefact explores what this means in reality.