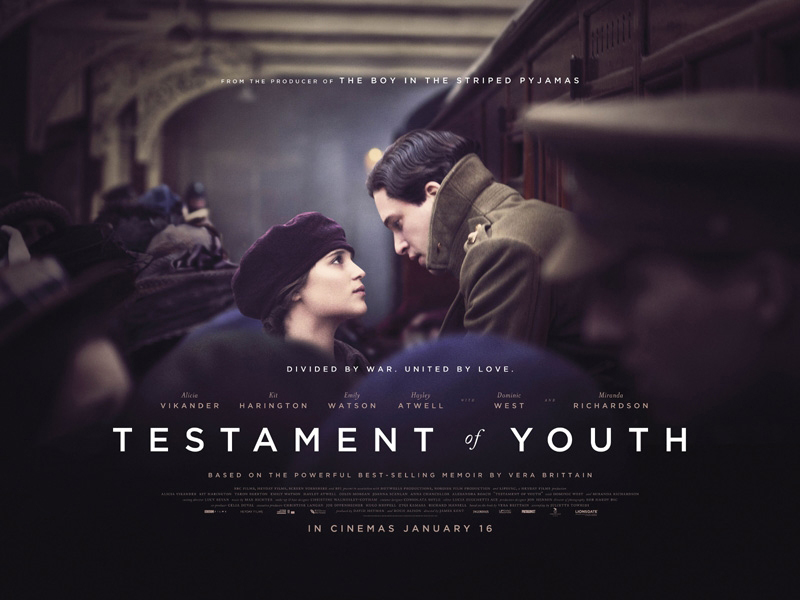 Based on her own experience during World War I, Vera Brittain penned a brutally raw description of life during her service as a nurse on the Western Front to explain the hardship and sorrows her generation was forced to face.

Published in 1933, Testament of Youth was an instant classic, and has now been adapted into a film.

Viewers witness the growing darkness and horror of the period, as the film passes from the carefree summer of 1914 to the torn-up fields of France where Brittain served after leaving her BA studies at Oxford.

Despite the frustration the viewer is left with in the scene where young men are told to sacrifice their young lives for King and country, Testament of Youth manages to offer viewers a chance to explore a different tale of war, focused not on the heroism of death, but that of life.

Director James Kent stays true to the book, focusing on the gnawing feeling of dread Brittain lived with as she saw friends and loved ones taken off to war – even if fight scenes are kept to a minimum, the despair created by the conflict is still highly perceptible and difficult to shake once the screen turns to black.

Pulling off a perfect English accent, Alicia Vikander (The Fifth Estate, Ex Machina) offers a striking performance with her portrayal of Brittain, as she channels the conflict between her patriotic feelings and the wish for the safety of her friends.

Supporting her dazzling work is Game of Thrones’ Kit Harington in the role of Roland Leighton, British poet and Brittain’s fiancé, and Colin Morgan (Merlin, The Fall) as Victor Richardson.

Max Richter’s music accompanies each scene with a score that fills viewers with an eerie, but captivating, sense of dread for the future of young Vera Brittain.

Testament of Youth is a strong adaptation that will convince even the hardcore fans of the original book of its worthiness.