The student nurses on the front line

“Lack of PPE”, “physically draining”, “stressed, unable to see our families” and “frightened” – these are just a few of the comments made by a second year nursing student who worked during the Covid-19 lockdown.

In May, when the NHS put out a call for student nurses to help with the first wave of the covid crisis, one of those who stepped forward was Sarah Penman, a 20-year-old undergraduate nursing student studying at Kingston University.

Because of the pandemic, many of her peers on the course had decided not to complete their placements, due to safety concerns. “They were afraid that they would get infected with a virus while on placement in a hospital.”

This was not helped when many NHS workers had already expressed to the media that there was a shortage of PPE within some hospitals, causing them to have to change their protective equipment less often. The health minister admitted to facing “challenges” when asked about supplying PPE to areas in need.

According to British regulations, nurses “working within 2 metres of a confirmed or suspected Covid-19 patient should wear an apron, gloves, a surgical mask and eye protection.” The single-use PPE is supposed to be changed after caring for each patient; however, nurses were told to change the equipment after multiple patients because of the shortage.

Before the pandemic, She was scheduled to begin her clinical placement during the last term of her second year. This placement was set to start in April; however, this was unexpectedly interrupted by the pandemic, causing it to be abruptly cancelled. 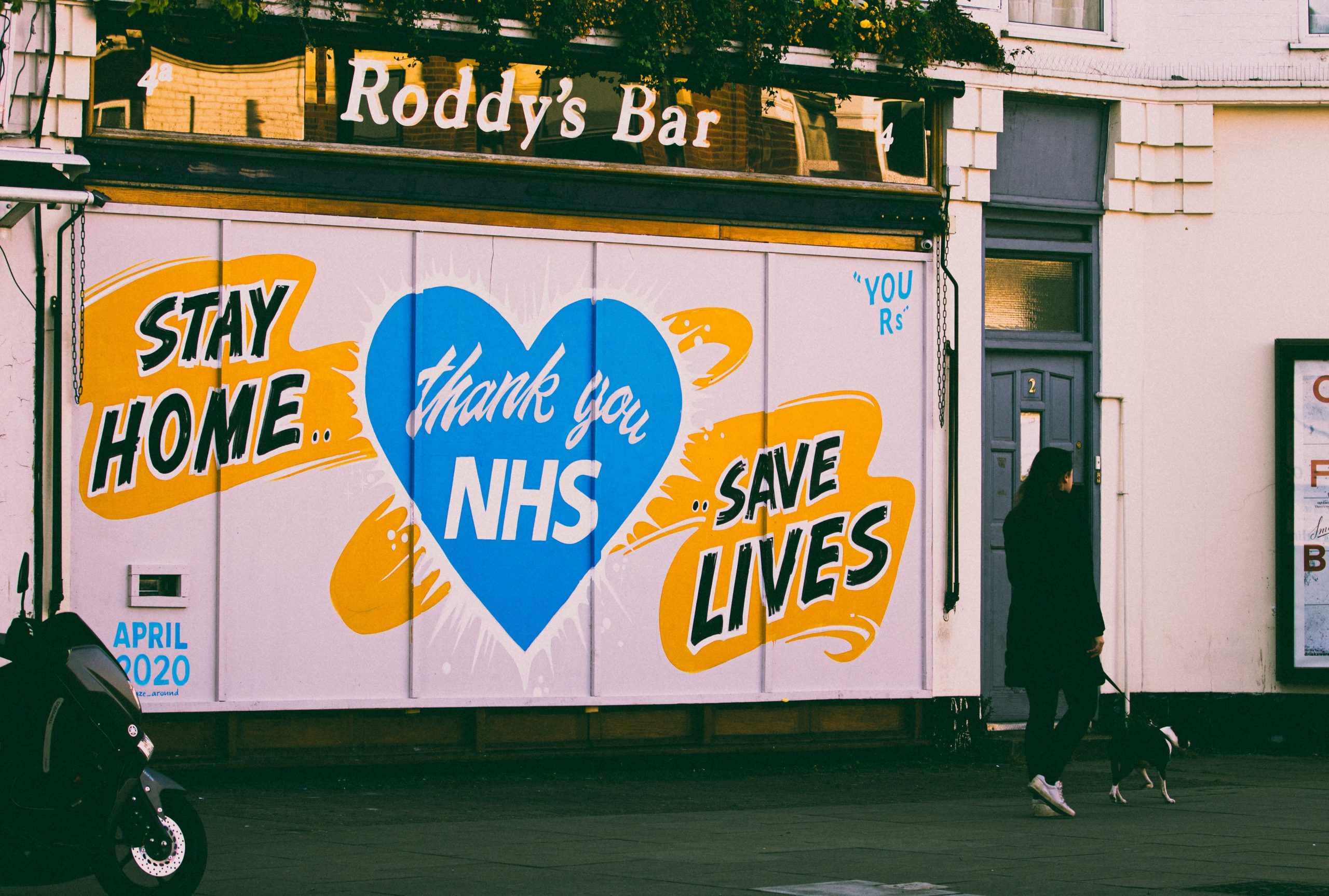 Society has been thanking the NHS [Unsplash: Edward Howell]

Sarah outlined what she did during her placement: “We were paid the equivalent of the health assistants’ wages and basically did everything required of them in that role. Just did whatever needed doing. If a patient needed toileting, we would help them, made a lot of beds, moving beds from one ward to another or just talking to patients and making them feel comfortable since their family was not allowed to visit due to Covid.” She described her placement as being “not too bad, at the time.” Although she added: “I really miss my family.”

As a student who lives away from home during term time, she was already away from them for extended periods of time. However, being told she could not see them because of her placement was a very different feeling.

“My nan has health issues, so for me to come around after being on the ward was too high a risk. It was upsetting because my boyfriend (who she lives with) got to see his family after some restrictions started to be eased. But I was unable to.”

She stopped talking and smiled into the camera: “Actually I did get to see my family on my sister’s birthday, I didn’t enter the house, we stood socially distanced from each other outside the house just to give Abbie (Sarah’s sister) her present and sing an out of tune rendition of Happy Birthday.”

It wasn’t until she started the third year of her degree that she realised how ill-prepared she was. She noticed that many of the questions she was being asked were things that she was supposed to have learned and practised during her clinical placement.

But her placement during lockdown had not taught her anything clinical and instead acted as a filler to increase the number of hours worked to graduate on time and just an extra pair of hands when the NHS was in need.

Despite this, Sarah was not as worried when the Health Secretary announced that the placement period would no longer be paid beyond July 31 for second-year students. Sarah described the end of her placement as “a bit of a relief!” She had planned to go on holiday at the start of August, “so it came just in time.”

In contrast, Jennifer Asante was also a second-year nursing student at the time who “felt devastated and uncertain,” after hearing the announcement. She, unlike Sarah, was reliant on the money she was receiving from her placement. Jennie was using this money as her main source of income.

As a student who had moved from Leeds to London to attend London South Bank University to complete her Adult Nursing Degree, being away from family wasn’t a problem. However, she had been made redundant from her waitressing job at the start of lockdown.

As she did not want to burden her parents financially after losing her job, when she found out that they were asking for second-year students to join and work within the NHS, she jumped at the chance and signed up.

“It was perfect, my next student finance drop wasn’t going to be till September, and I needed money now! I had used all my money to pay my rent in advance after extending my lease thinking I would be working throughout the summer. I was relying on the job that made me redundant to pay my other bills and expenses.” 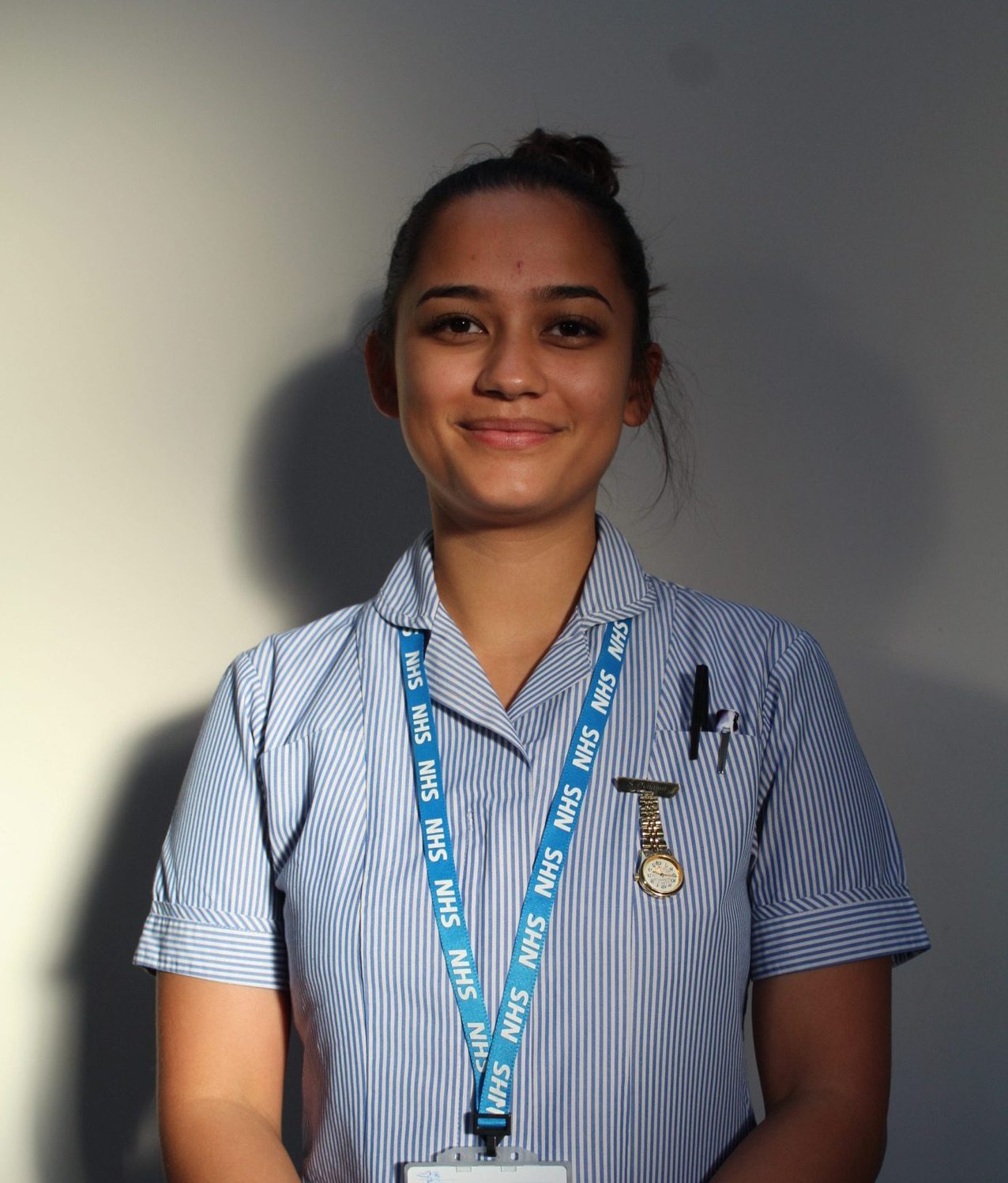 These students were offered the wages equivalent to a health care assistant of approximately £10 an hour. They were to work from May/June to September to help support nurses during and after the projected peak in hospital admissions due to coronavirus. In return, they were required to carry out the tasks that would usually be done by a health care assistant, including cleaning excrement, making beds or even just serving and feeding meals.

“People were buying in bulk, while I was struggling to finance my weekly grocery shop. The paid placement was honestly a big help”, she shook her head. “When the paid placement scheme was stopped, I found myself in the same place I was at the start of lockdown. I was desperately applying for jobs.

Even when I asked my parents, I told them I needed a lesser amount of money than I actually needed. I felt so bad. I knew they were struggling too, especially during this time.” Under pressure, Jennie decided to take out a payday loan from the student loan company Smart pig, which is repayable when her next student finance drops to use while she was job hunting.

After hearing how Jennie felt about the abrupt ending to her placement, I asked her how she felt about clapping for the NHS. She rolled her eyes: “They (the Government) were telling people during this lockdown to clap for the NHS, but half of them were still breaking lockdown rules. Clapping didn’t do anything for me; it didn’t do anything for the qualified nurses that were still coming into work while having underlying health issues. It did not help us get the required amount of PPE.”

She laughed at the irony: “they really tried to kill health sector workers, then basically said: ‘Well done you didn’t die!’ While getting the whole nation to clap? No, that’s not okay.”

Jennie also expressed her dismay towards the government’s reluctance to increase pay for nurses: “It’s tough to believe that looking back at even the last couple of years, the wages earned by a nurse have barely increased, yet the cost of living has.”

She was correct. According to an article published by NursingNotes, nurses were found to be “£6,144 per year worse off due to wages failing to keep up with the rate of inflation (RPI).”

The Prime Minister publicly refuted claims of not increasing the wages of nurses. He claimed that the workers had just received “an inflation-busting pay rise. Nurses alone as part of the package we agreed in 2018 have had a 12.5% pay increase since then.”

The health secretary also maintained that nurses had received a “very significant pay rise” in May. However, many nurses publicly made it clear on social media that they were yet to see the pay rises that the government was claiming have implemented, and they didn’t apply to new recruits like Sarah and Jennie. 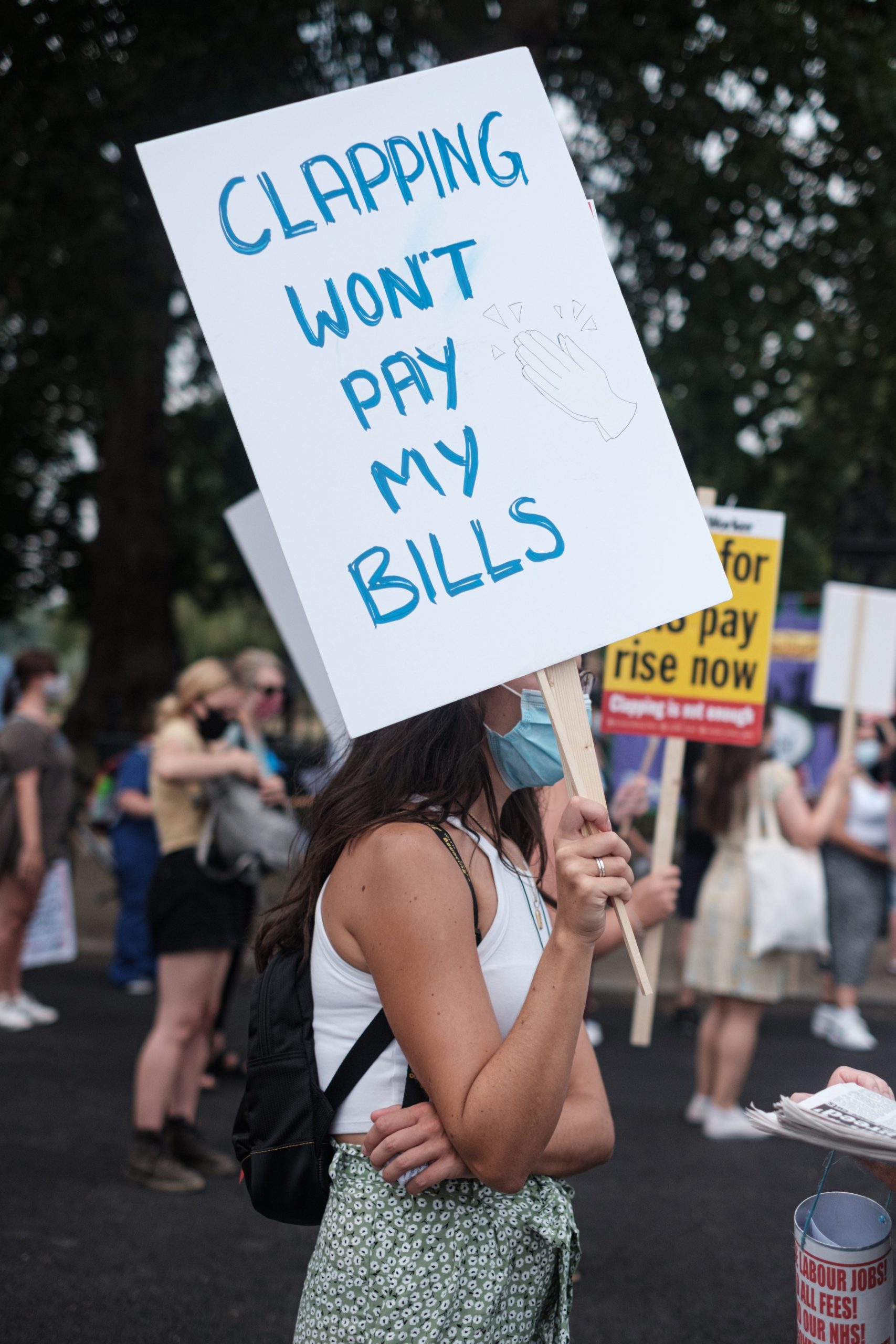 Health workers have taken to the streets over levels of pay [Unsplash: Ehimetalor Akhere Unuabona]

Due to the lack of pay rises in the past, some nurses, like my mother, decided to leave the NHS and instead work with a contractor to the NHS. This meant she would be providing the same services as she did when employed by the state-funded health care system but would be paid significantly more. She is considered self-employed but is signed to a healthcare staffing agency who source shifts for her and charges a small commission.

According to Talent.com, the average amount earned per hour is £17.52, in contrast to my mother, Juliet is paid £25-£40 an hour depending on the ward and hospital location.

However, there are negatives to working as a contracted nurse, such as she no longer has an NHS pension, and if she takes a day off, she doesn’t have the option to call in sick to work, she just does not get paid. Although she considered these things before leaving the NHS, Juliet realised “she would rather be working the same amount, for more money than breaking my back just about to afford to live.” Besides, she loves being able to pick when she wants to work and when she does not.

The last question that I asked Sarah and Jennie was how they felt the Government had treated them as both an NHS worker and a student.

“Tory government needs to do better, the way they handled the pandemic was shambolic,” Jennie told me, and both students mentioned how they felt that completing a placement during the lockdown had made them think about if they even wanted to stay.

“There are loads of countries that will work you just as hard, but at least I will be paid an adequate amount for my work!” Sarah jokingly told me.

“I still want to be a nurse but maybe just not within the NHS.”