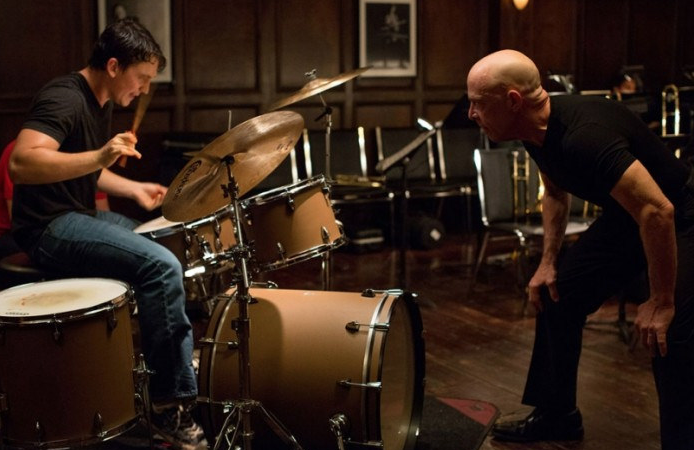 Academy Award-nominated Whiplash tells the story of Andrew Neiman, a promising young jazz drummer who gains a place at one of the most prestigious music conservatories in America.

Neiman, played by Miles Teller, dreams of becoming ‘one of the greats’. His idol Buddy Rich is a drummer known for his incredible solos.

His break comes as Terrance Fletcher (J.K. Simmons) asks him to join his studio band. Things start off promising, but Neiman soon discovers that the ultra-demanding Fletcher’s teaching methods are controversial.

In one scene, he throws a chair at Neiman and asks: “Were you rushing? Or were you dragging?”. Fletcher goes on to slap his pupil across the face several times as the rest of the class remain deadly silent, frightened of receiving similar treatment.

J.K. Simmons, Oscar-nominated in the Best Supporting Actor category, delivers the performance of a lifetime, which has been likened to that of Lee Ermey as gunnery sergeant Hartman in Stanley Kubrick’s Full Metal Jacket.

Together, Simmons and Teller form a startling relationship – one that grows with the story.

Throughout the picture, references are made to how all the ‘greats’ became famous, sending a message to the audience about the price paid by those who want to stand out in life.

One of the most memorable lines comes toward the end of the film in a conversation between Fletcher and Neiman: “No words in the English language are more dangerous than ‘good job’.”

The movie is well paced and each scene is as unpredictable as the previous. Whiplash grabs your attention keeping you mesmerised throughout; it’s truly a must see for film and jazz fans alike.

Oh Heck! Cobain biopic due out in April