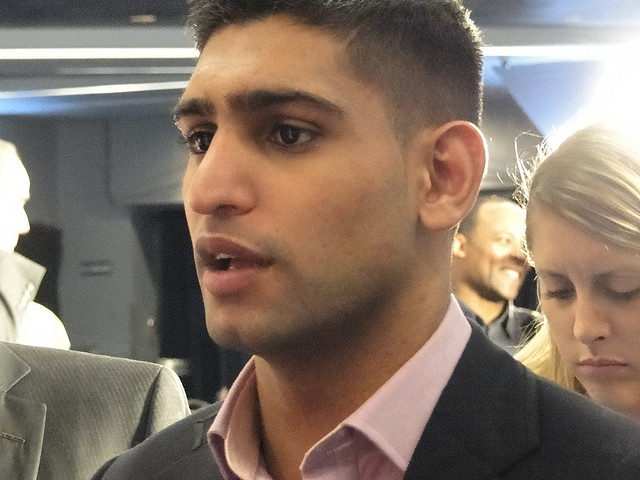 Eddie Hearn is hoping that a summer showdown between Amir Khan and IBF welterweight world champion Kell Brook could be on the cards.

However, Brook’s promoter told Artefact there are plenty of stumbling blocks to overcome before a lucrative match can be made for the British rivals.

Brook, 28,  is keen to face Khan, and Hearn said: “I would love to make it happen at Wembley or another outdoor stadium.

But he added: “First of all, we’ve got to get around the table, and until we do we’re just living on fantasy island.”

Brook, 28, claimed the IBF crown by beating Shawn Porter on points in California last August, becoming the first British boxer for 28 years to take a world title from an American opponent in the States.

Khan, also 28, a former WBA and IBF world champion at light-welterweight, took a unanimous decision over Devon Alexander last time out at the MGM Grand in Las Vegas.

However, the 2004 Olympic lightweight silver medallist  has his sights set on multi-million dollar fights against Floyd Mayweather and former sparring partner Manny Pacquiao.

Any bout against Brook will have to wait as the Sheffield fighter is due to defend his IBF title against mandatory challenger Jo Jo Dan in March.

Brook has returned to fitness following a machete attack in Tenerife  last September which left him with an horrific leg injury.

Khan is looking to return to the ring in May or June, but Mayweather – currently the biggest-earning name in the sport – continues to keep the Bolton boxer in limbo.

No-one doubts that a Khan-Brook fight would fill a major stadium, similar to the Wembley sell-out for the second fight between Karl Froch and George Groves.

But who would win? BBC Sport website boxing writer Ben Dirs said: “For long time, I’ve thought Kell Brook would beat him [Khan], and it would happen in round nine or 10.”

But Sanjeev Shetty, author of The Hate Game, about Nigel Benn and Chris Eubank’s bitter ring rivalry, said: “I’d go for Khan, based on his greater experience. I think he should win and he looked superior [compared to Brook] in his last fight.”

Hearn added: “We hope it [Brook v Khan] happens but boxing is a frustrating sport.  You know you’ve got a fight that everyone wants to see, a fight for a world title, one that will earn both boxers a fortune, and someone is not entertaining the possibility – so you have to ask yourself why?

“Don’t give me any rubbish about Kell needing to earn it [his chance to fight Khan] – he went out and won the world title in America. As for Khan claiming ‘Oh, I’ve fought better opposition…’  – it’s not a pissing contest. Let’s just have a fight for a world title and make millions.”