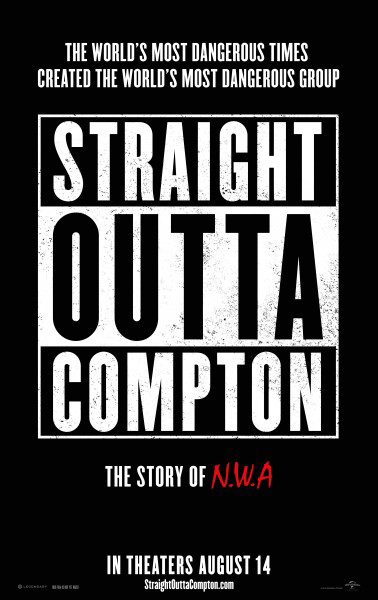 It’s the biopic all hip-hop fans have been anticipating – Straight Outta Compton – the story of five young men from South Central Los Angeles who set the West Coast hip-hop scene alight in the late ’80s and early ’90s. Whilst controversial, their influence is enduring and has paved the way for generations of rap artists.

To be released 14 August this year, the film tells the tale of NWA and members Ice Cube, Dr. Dre, Eazy E, DJ Yella and MC Ren. The group pioneered gangsta rap and gained notoriety across the world for their Fuck Tha Police stance, misogynistic lyrics and glorification of drugs, guns, gangs and violence.

The film sees the young rappers ascend from the Los Angeles ghetto to the world stage, with their 1988 debut album Straight Outta Compton attracting both a cult following and turbulent relationship with the authorities, most notably the FBI.

Directed by F. Gary Gray, the film stars classically-trained actor Marcus Callender as Dr. Dre, Ice Cube’s son O’Shea Jackson as his father, and the late Eazy-E will be played by newcomer Jason Mitchell. Premiered at this year’s Grammys, its trailer features introductions from Dre and Cube, plus a cameo from rapper Kendrick Lamar.

First impressions of the trailer suggest a slicker, even more glamourised version of real-life events, something echoed on Facebook by hip-hop aficianado DJ Food aka Strictly Kev: 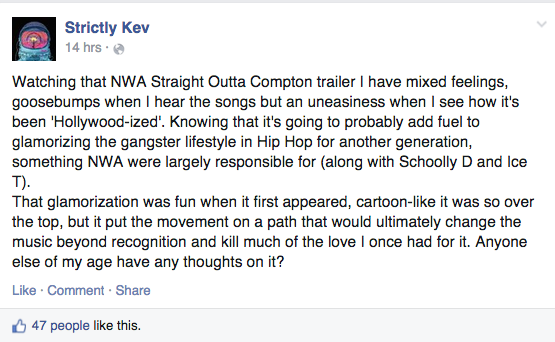 DJ Food speaks out on the new N.W.A biopic

Watch the trailer below: