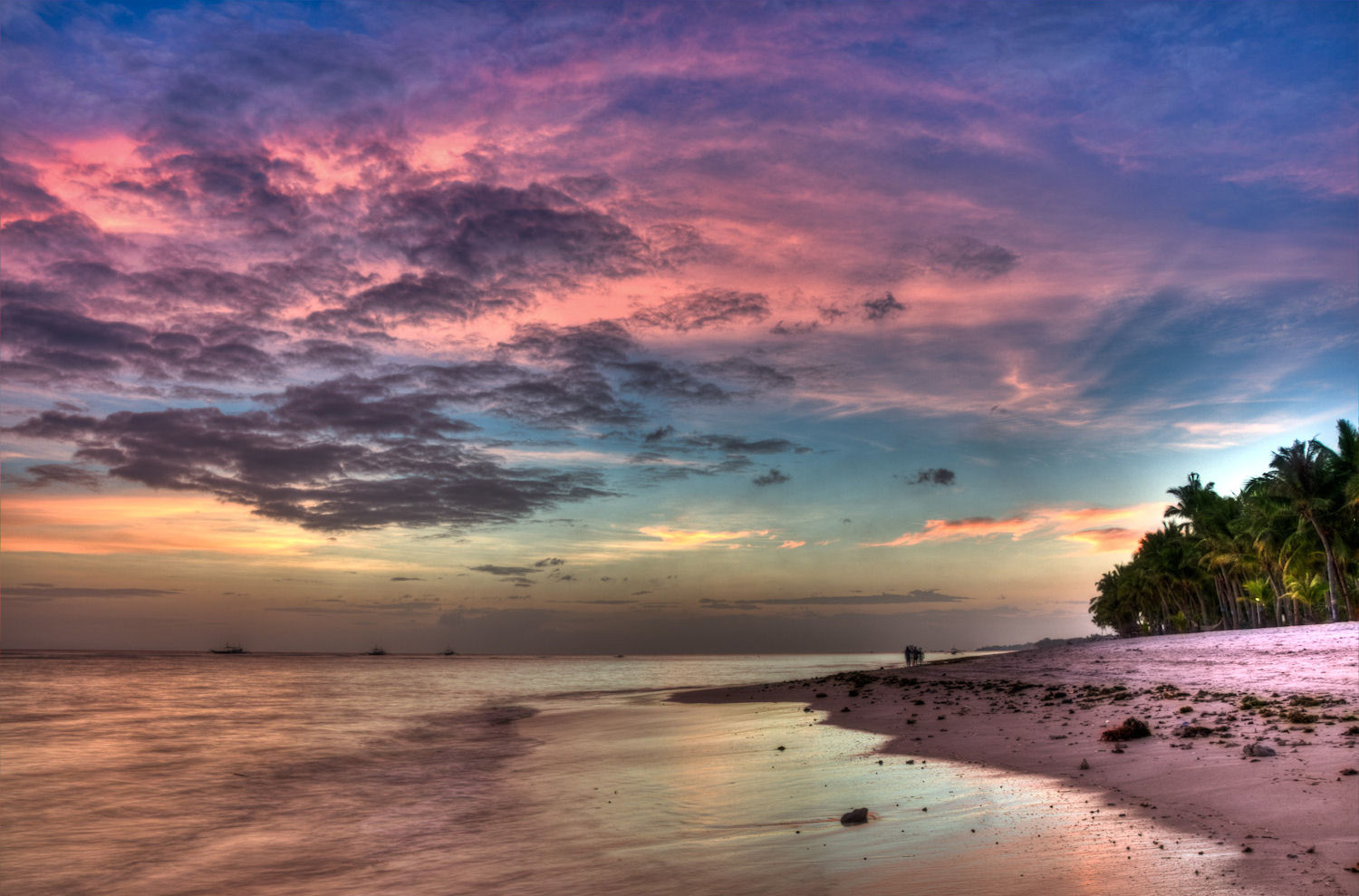 November 2013: Scenes of devastation dominated the media as typhoon Haiyan tore its path through the Philippines, destroying not only towns and lives, but the country’s reputation.

“I hate that we’re seen as this poor, helpless third world country, we have poverty, sure, but don’t most countries?” says Crisanto Navarro, a hotel owner on the island of Cebu, an area which felt the wrath of typhoon Haiyan, or as the Filipinos came to call her, ‘Yolanda’.

While the images that struck us came from the worst hit city of Tacloban, areas which bring in a huge amount of cash for the country such as Bohol and Cebu were also completely devastated.

While they are not the only tourism destinations in the Philippines, the industry took a massive hit that November. Aid workers poured in and people were offered food, shelter and water but the impression I received from Filipinos was one of pride.

While they could not afford to turn away aid, they wanted to be able to put themselves back on their feet as opposed to being hauled off the ground by western countries with big bucks to spend. 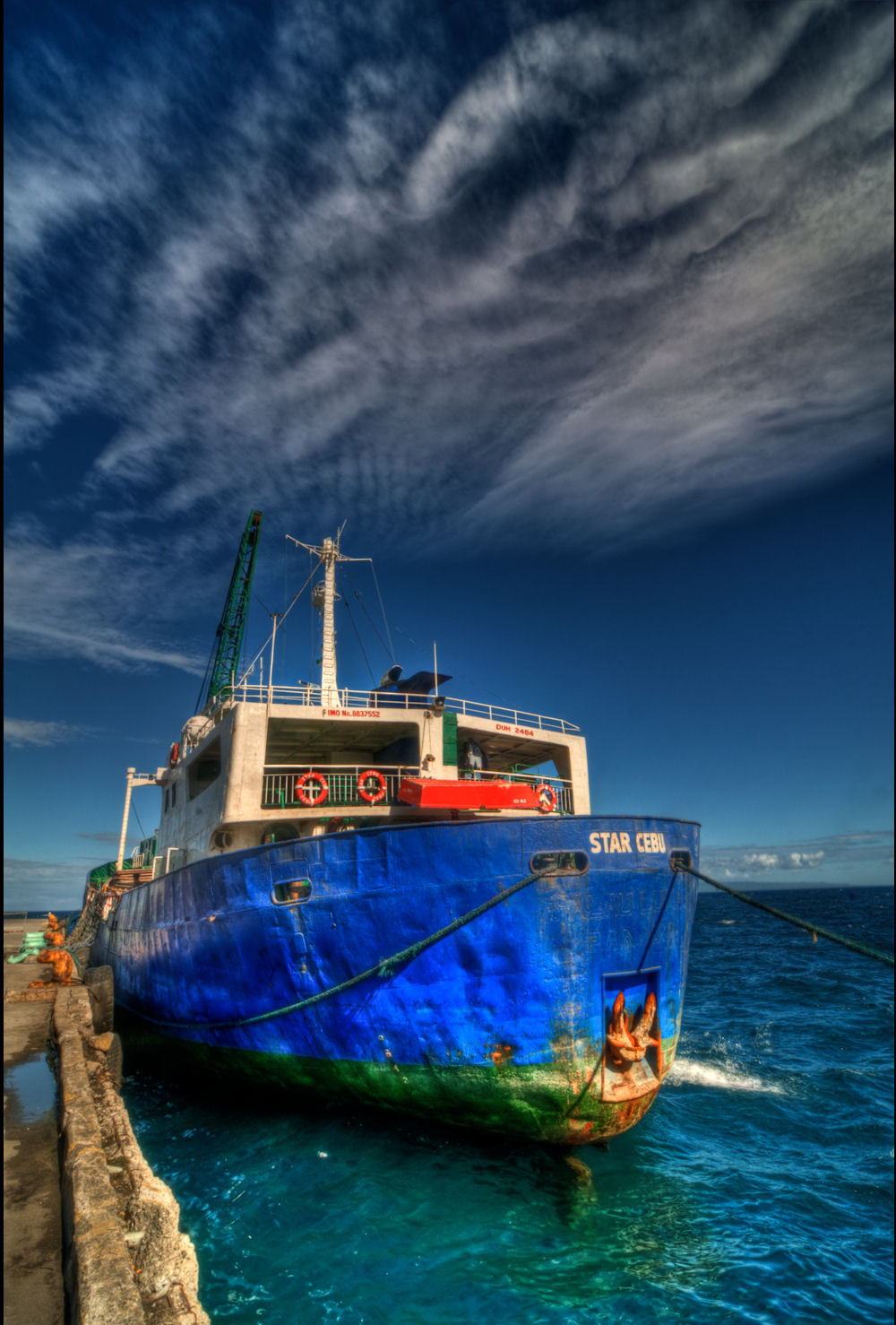 As well as being a hotel owner, Crisanto has become an active member of the tourism board to help encourage tourists back to the island after the disaster.

He says: “Don’t think that we’re not grateful for all the help and love we received, we are. But Filipinos have so much pride and love for our country, that we want to build it back up ourselves. Yolanda was traumatic, I lost family and my hotel to the typhoon and I know people who lost their houses to her. That was over a year ago now and we want to be putting back together our country. That’s difficult when people think the Philippines is just one of disaster.

“They used to come, loads of them. Right up until the typhoon people from all over the world were visiting us and it was very exciting to have people acknowledge us and our country as a tourist destination. But now we don’t get as many, when we need them now more than ever. Our country is still beautiful, the typhoon actually only destroyed around three per cent of our land. That’s nothing.”

While charities such as the Red Cross and Oxfam provide aid, they cannot provide the tourism the country needs to get back on its feet. If the Philippines has anything to sell to you, it is their sumptuously beautiful country.

Forget Thailand with its boozy gap-year Brits tearing up Koh Pha Ngan. Instead, head to the alluring and back-to-basics islands such as Bohol and Cebu.

Replace those mental images of devastation with real views of complete and utter beauty. While natural disaster is never a good thing, the islands have been stripped back to their natural state while the tourism industry gets back on its feet, and rebuilds the resorts which once existed.

So, here is the lowdown on some of the best the Philippines has to offer and how to make sure your money goes straight to the locals to help rejuvenate the Philippines.

While many of the original highlights and must-see landmarks were destroyed in typhoon Haiyan, there are plenty that survived and crave to be among your Instagram photos.

“Our country is still beautiful, the typhoon actually only destroyed around three per cent of our land. That’s nothing.” Crisanto

Let’s start off in Bohol, which was once a tourist trap in the Visayas Islands.

You can catch a ferry from each island while enjoying travelling by something other than a plane. Bohol is usually advertised exclusively with its Chocolate Hills, famous because when you look at the hills from above they look like a chocolate box.

Here you can also find the cutesy wide-eyed tarsier monkeys, the smallest primate in the world which only lives on this island. These two attractions are still there for you to enjoy, but there is a hell of a lot more to this island than monkeys and mountains.

Take a boat trip down the Loboc River, a jungle in an unusual and wonderful island setting. If you’re looking for Eden, go on a island hopping trip where you’re picked up at the crack of dawn in a wooden and rustic fishing boat by two men who barely speak English.

The language barrier isn’t an issue though as they sneak in your island selfie and offer chunks of pineapple and fresh coconut water to enjoy. The day trip gives you a glimpse of the authentic island life you dream of, as you hop between islands that are no bigger than the Houses of Parliament.

Take a dip in the colourful reef, situated a short distance from the beach and devoid of ignorant tourists trying to break off chunks of coral as souvenirs and littering their Cheeto packets on the beach. 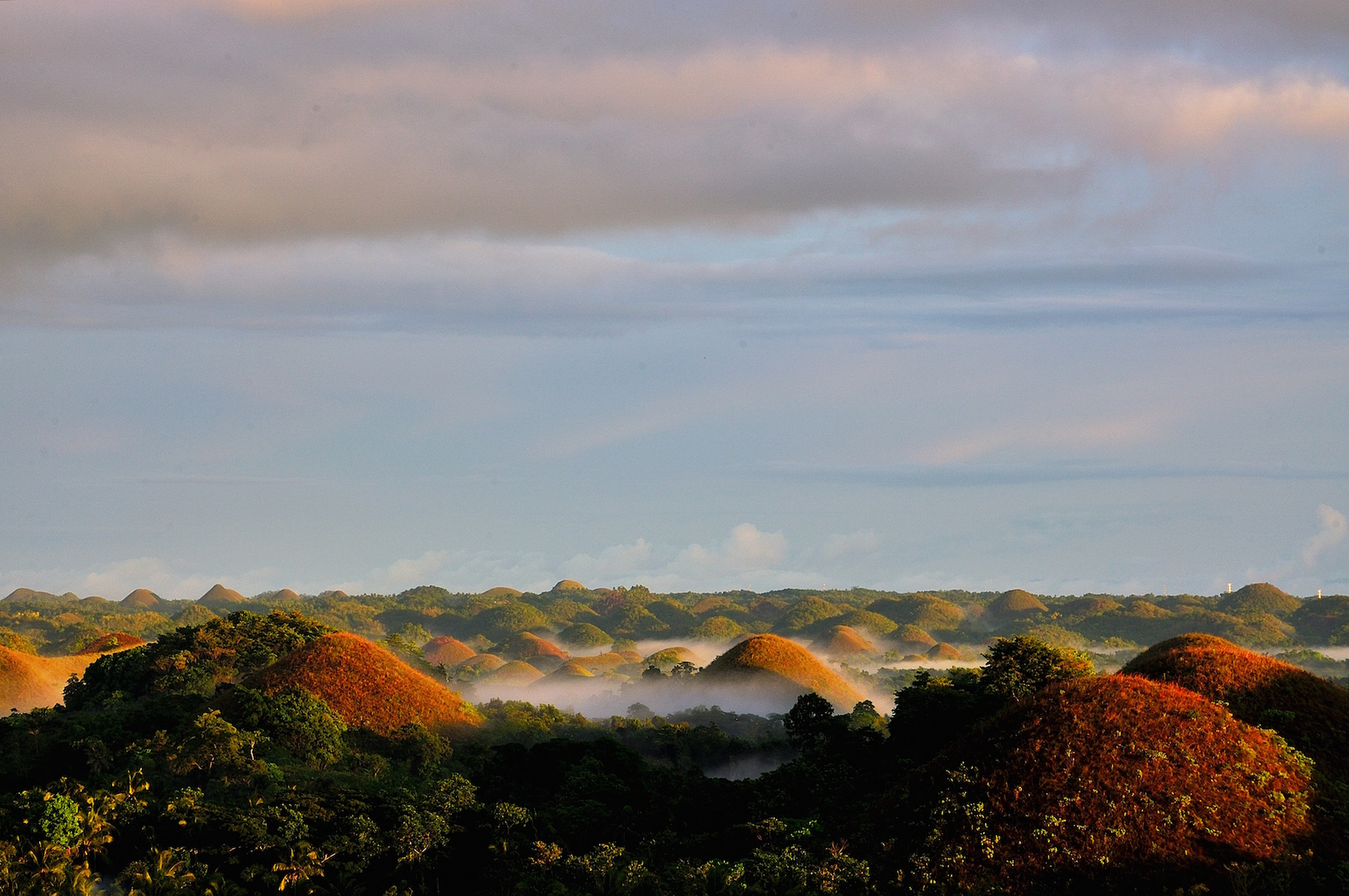 The Chocolate Hills in the island of Bohol are unlike any other landscape you will visit.

This leads me onto my next point, don’t book any of your tours with travel companies here in the UK, do that when you arrive in the Philippines.

For example, the island hopping tour in Bohol, if you book it in the UK, will be massively overpriced at over £100, and a good chunk of that cash will be poured into corporate companies where the CEO is pocketing your hard earned dosh.

Instead, go and book your tours in the country you are visiting! When you talk to the people who actually run the tours in the Philippines, all the money you pay will go straight to them.

This is the best kind of ethical travel. You pay a lot less in the Philippines, and the tour you pick and pay for will be handled internally, meaning no cash leaves the country.

Beside the ethical values of purchasing tours and trips in the actual country, it’s all part of the fun; bartering with the locals as they sell you their beautiful country and the tour of Bohol island they want to take you on. No travel agent can sell a tour of a tiny island better than the man who was born and raised there.

Eat! Put down your Big Mac and go and eat some fish caught by the local fisherman, and watch as they marinade and grill it for you right there on the beach.

It is a much healthier and enriching experience for your soul as well as your heart. I know sometimes it is easier to just stick with what you know when it comes to food, the local cuisine may not be quite what your used too. But go out there and work harder to find cafes, stands and restaurants which offer something beside pork and rice.

Filipino cuisine is certainly not as flamboyant as most South-East Asian countries, don’t expect fancy coconut and lemongrass infused curries. The locals have lived off pork in some shape or form, accompanied by rice for centuries.

But if you are bored of that, Filipinos love a bit of fried chicken and they make a mean and unconventional spaghetti bolognese. The bolognese they cook is sweet as all their tomato sauces are made with banana, which may sound unusual but it definitely works. 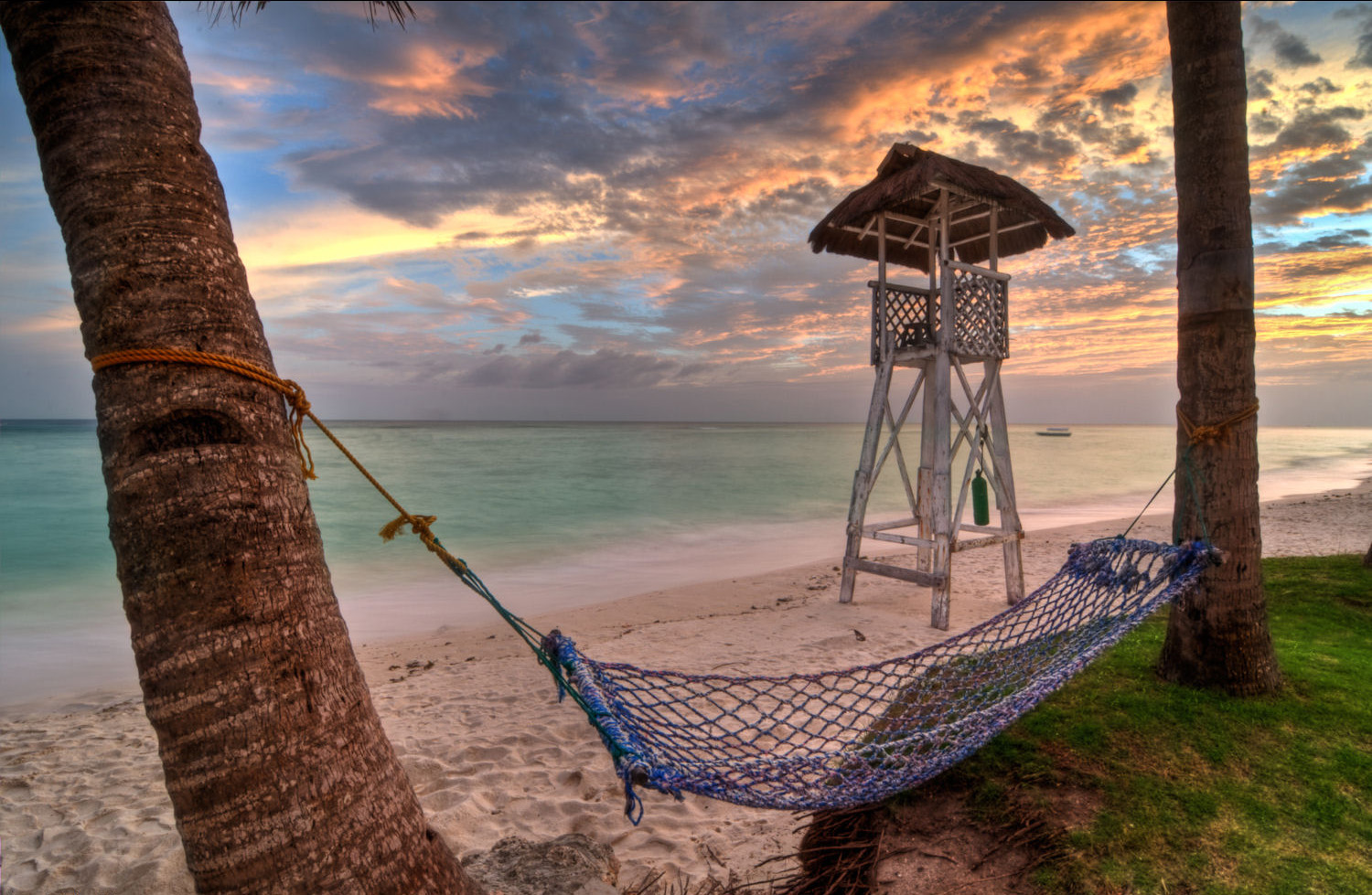 Finally, I know this one is for the slightly more adventurous traveller, but don’t book all your accommodation before you arrive. I know most people like the comfort of knowing where they will be staying for the nights ahead, especially when you’re in a foreign country.

But this isn’t a “sorry Mary and Joseph, there’s no room at the inn”, situation. You will find accommodation, and it will most likely be nicer than that four star hotel-spa that you were looking at on booking.com.

There are endless numbers of hotels or hostels which are in drop dead gorgeous locations, deep in the jungle or right on the beachfront, which you cannot find online.

My advice would be to book your hotel for the capital of the Philippines, Manila before you arrive at the airport. Then spend a few days wandering around the city and getting to grips with the culture and the people before being a bit more impulsive with your accommodation when you travel on.

While you’re there, you will no doubt come across a Filipino tourism agency who can tell you all of the best places to stay. As overly enthusiastic as they may be, they aren’t liars and will not recommend anywhere that they do not like or rate.

Right then and there, you can book your accommodation for the rest of your holiday and, as you book it in the Philippines, the money will remain there.

A lot of what I am saying all bubbles down to the boring economy, but that’s what is important. This country is in the process of getting back on its feet after the typhoon, and while aid from first world countries is great, the images which came from the typhoon and were spread across the media, damaged the Philippines’ reputation.

This is through no fault of the media, but what have you heard or seen from the Philippines since a few months after the typhoon? Zilch, nada, nothing.

But we now have negative images etched in our minds, and who would want to travel to a country which we visualise as broken? So here it is, the Philippines in it all the natural splendour that could not be destroyed by a typhoon.

It is ready and eagerly awaiting your visit to flaunt how great a country it really is.