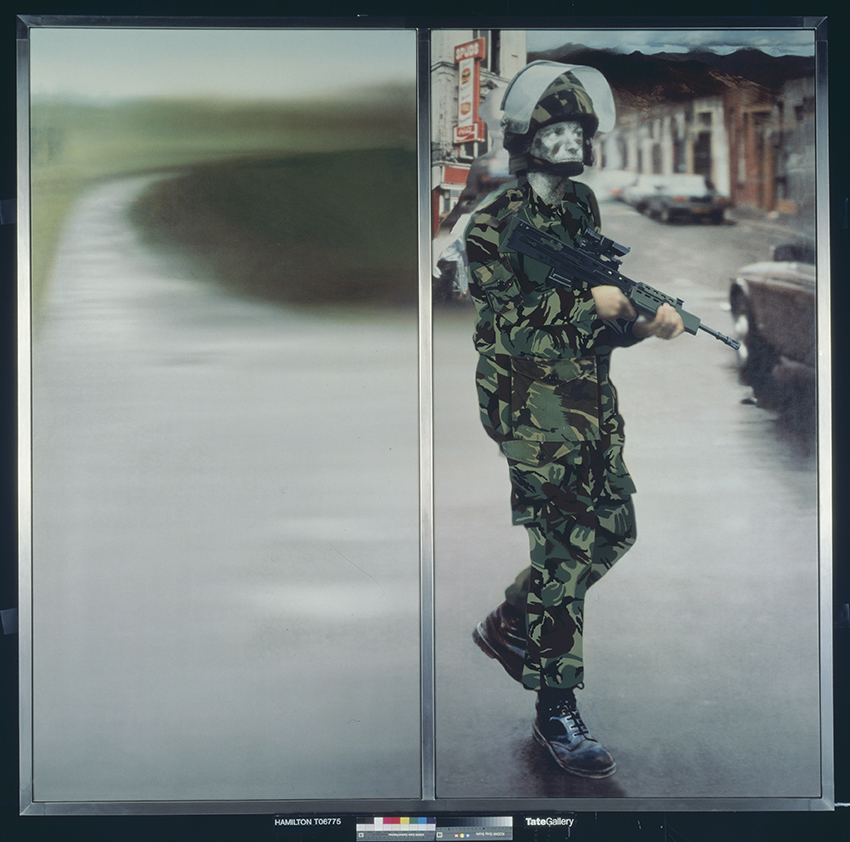 History Is Now is possibly the most important exhibition you’ll see this year.

The show is set up by the artists to form six inter-linked curations using seemingly inanimate objects to major pieces of other artist’s works including paintings, sculptures, photographs, videos, protest writings to film costumes and newspaper cuttings. The effect is to give a sense of this country’s misgivings post-World War II. And that it does.

As you walk into the Hayward there’s a sense of the unknown, and perhaps a slight standoffishness, ‘seven artists trying to tell me about modern history through their own taste and choices?’ But that notion is fleeting as you become immersed in the first room, curated by Simon Fujiwara, a young British/Japanese artist.

The premise is to explore the shift this country has seen over the last 40 years, from the death of industry to the rise of consumerism and the consumption of ‘immaterial goods’, creating an unattainable happiness or as the artist aptly puts it ‘happiness through GDP’. 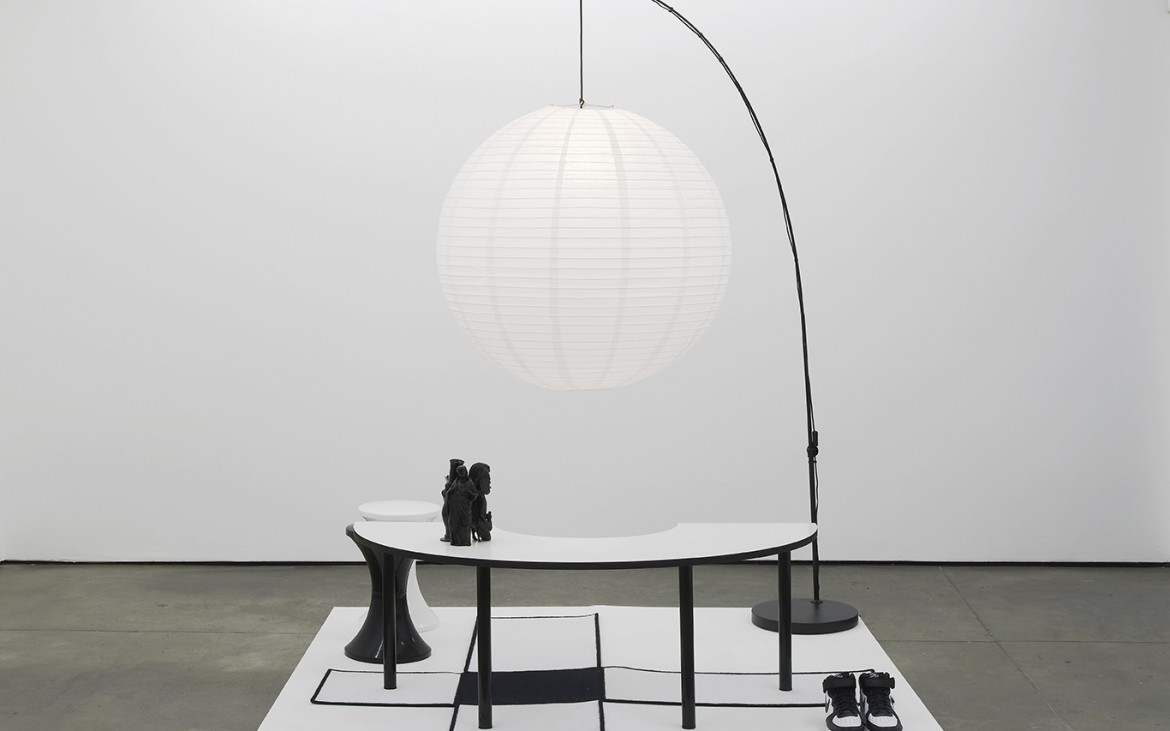 There’s no doubt who Fujiwara attributes this change to – one of the first displays you see is Meryl Streep’s costume she wore playing Margaret Thatcher in The Iron Lady; opposite there’s a half tonne block of coal from one of the country’s few remaining working coal-mines.

As you move round there’s a school video of a young Fujiwara performing in Mary Poppins aged 9 – perhaps a dig at its capitalist values? Next to this is Sam Taylor-Wood’s video of David Beckham sleeping, an icon of global consumerism (incidentally, the video was funded by JP Morgan).

Behind it is Matthew Darbyshire’s Furniture Island No 8, a collection of furniture that wouldn’t look out of place in Frasier Crane’s living room, accompanied by some Nike trainers. There’s more of it as well, one of Damian Hirst’s spot paintings laid flat and a case full of empty Waitrose herb bags, this is the middle class dream we’ve been sold.

Moving on, you come to sisters Jane and Louise Wilson’s take on our Great Britain, and more succinctly our troubles – from the conflict in Northern Ireland to campaigning against nuclear disarmament to the effects of recession on our work force.

There are Conrad Atkinson’s 126 postcard size printed murals covering the Troubles from 1968 – May Day 1975, commemorating and communicating, they read with statements like: ‘Loose talk costs lives’ accompanied by a coffin and a lady with a finger over her mouth, to the more literal ‘Internment! Without charge or trial in concentration camps. Is this British justice?’ 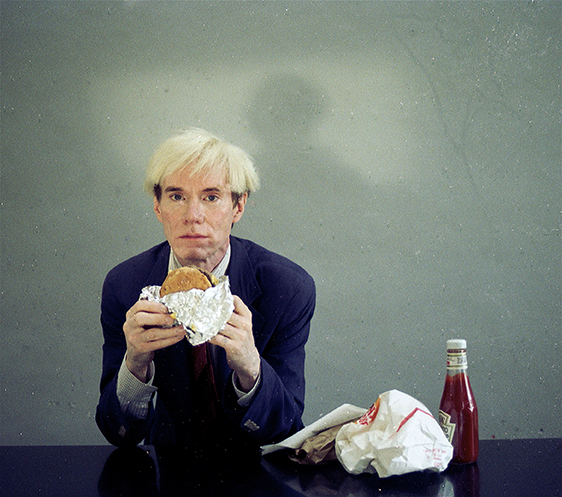 Then there’s a blanket used in a German police firing raid laid on the floor by Turner prize-winning artist Christine Borland, it’s purpose not obvious until you take a closer look. Across from this is Stuart Brisely’s installation – 66 hanging leather gloves in a rusty cage, each one representing one of 66,666 unemployed able-bodied folk (the number out of work in 1983), a piece that resonates just as loudly today.

Some elements don’t work as well as others. Roger Hiorns’ section devoted to mad cow disease seems, although contextually relevant, too much. By his mid-section I was left wondering how much more information on BSE I could digest, and all watching Andy Warhol eating a cheeseburger did was leave me craving for one myself. 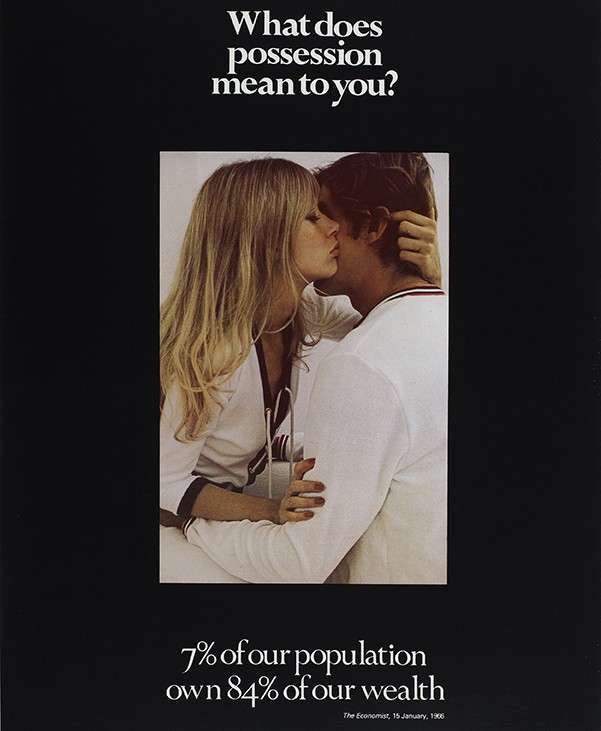 But most of it does work. There’s Hannah Starkey’s brilliant juxtaposition of mainly ’70s and ’80s documentary photographs showing the consequences of de-industrialisation, set against advertisements which play with the ‘reductive messages’ we normally expect from people selling us things.

As you come into the space the first image you see is a poster Victor Burgin created in 1976, it’s called Possession and it shows two lovers hugging with the text ‘What does possession mean to you? 7% of our population own 84% of our wealth. The Economist 15th Jan 1976.’ A figure that today seems starkly modest.

Other images in this powerful, and best, of the curations include Paul Graham’s shots of dole offices in the 80s. In one, a baby stands by herself in the middle of a grim Birmingham DHSS waiting room – alone it’s enough to leave you heartbroken, in the context of the room, it’s almost too much.

On the top floor are the two final areas, a room of 17 videos curated by John Akomfrah and a room by Richard Wentworth that focuses on the second world war and its immediate aftermath. Akomfrah explores conventional documentary and avant garde through the Arts Film Council’s collection.

There’s Gilbert and George in a film titled The World of Gilbert & George, which seems to be 69 minutes of them facing each other above a London skyline interposed with a man eating a kebab, which I’m sure if you’re down with G&G you’ll get. The problem with this room is there’s too much, to sit down and watch it all would take a week, but there is brilliance in there.

A film by Rodriguez King-Dorset that looks at the 1985 Tottenham Broadwater Farm riot and Winston Silcott, who was wrongly convicted of the murder of PC Keith Blakelock, uses dance and actors voice to disturbingly get its message across. It’s powerful stuff. 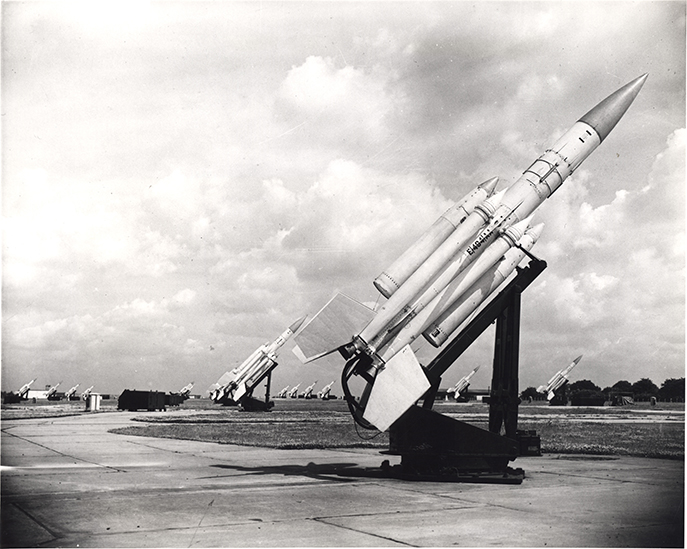 Wentworth’s space is probably the most conventional of the six. It has more pieces by iconic British artists than any other room. There’s Francis Bacon, David Hockney, Barbara Hepworth and Henry Moore amongst others. There’s the famously shaky photos by Robert Capa of the D-Day landings.

There’s the brilliant sculpture by Reg Butler, The Unknown Political Prisoner, that Butler describes ‘as a monument to those who had died in the concentration camps’. And then there’s a surface-to-air missile outside: being next to one must be a first for many visiting the exhibition, and its power doesn’t go unnoticed.

At times History is Now is overwhelmingly obvious, it’s literal, it’s often everything an art exhibition is not but this is what makes it so refreshing. And accessible. Yes, there’s a lot to get through and it’s occasionally laborious, but mainly it’s invigorating. It makes you question, it makes you think, it makes you pissed off and it excites. A vital, must-see exhibition.

History Is Now: 7 Artists Take On Britain is at the Hayward Gallery until April 26. Monday 12 noon–6pm; Tuesday, Wednesday, Saturday and Sunday, 11am–7pm; Thursday and Friday, 11am–8pm. Standard tickets £10.90 plus booking fee; concessions from £6.50.

Feature image courtesy of The Estate of Richard Hamilton, DACS 2014