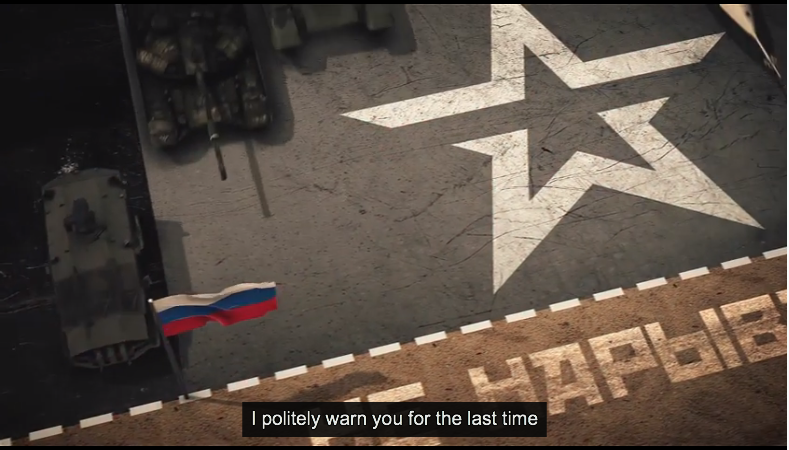 An independently made video, allegedly addressed to President Obama, has amassed millions of viewers on YouTube since it was published.

The two-and-a-half minute video-game style clip, entitled I’m a Russian Occupier, defends Russian imperialism by listing benefits brought to ‘conquered’ countries and pointing out their failures when Russia “was asked to leave.”

After the Russian occupation of the Baltic States, the video claims that the countries had factories and power plants as well as produced high-quality electronic goods, while “now they sell sprats, and some of their people clean toilets in Europe.”

“I invaded Central Asia. In bare steppes I built canals, factories, spaceports, hospitals and stadiums,” the video continues, adding that now citizens of those countries depend on the U.S. loans and the sale of cannabis.

Ukraine is also left without notice asserting that the Ukrainians are building nothing other than “endless Maidan and dictatorship.”

This short film was created by Evgeny Zhurov, a 29-year-old freelance graphics designer from Novosibirsk – inspired by text of the same title found online, written by Aleksei Ivanov, he decided to make a screen version.

Many see this film as Kremlin propaganda but according to Zhurov it is part of a personal hobby: “I don’t make money from such videos as they’re not client orders,” he says, adding that his earnings come from YouTube adverts that he uses to cover spending on narrators and music.

Apart from patriotism, “Maidan is one of the main reasons I create these videos… Russians mustn’t allow this happening in [our own country],” Zhurkov added.

Zhurkov shares his opinion on the relationship between Russia and the West: “It’s not a secret that the West wants Putin out. They don’t like his politics. The West needs someone obedient like Petro Poroshenko. We had someone like this in the 90’s – Boris Eltsine – obedient and democratic but our people suffered that time.”

While it’s attracted a plenty of pro-Russians, including the Russian deputy prime minister and former ambassador to NATO, Dmitri Rogozin, such endorsements are less enthusiastic among others.

For example, Alexander Vershbow, an American ambassador and current deputy secretary-general of NATO, describes the video on his Twitter account as “astounding.”

We take cleaning toilets any day over being part of what you have there – I’m a Russian Occupant: http://t.co/WON22cNlMN” — Tanel (@tanelps) February 28, 2015

The video’s also prompted someone with a nickname Uncle Pete to create an answer to pro-Russian propaganda, where he talks about ‘real’ consequences of Russia’s invasion.

The response video talks about Russia’s invasion to Afghanistan: “I left it as a global hotspot where all types of activities flourish, including weapons, violence and drugs.”

It also compares Russia’s living standards to its former occupied countries such as Poland asserting that Polish citizens are four times richer than their Russian counterparts.

The video contains English subtitles and ends with a feigned sending of the message to Barack Obama: “I politely warn you for the last time – don’t mess with me! I build peace, I love peace, but I know how to fight better than anybody else. Sincerely, your Russian occupant.”