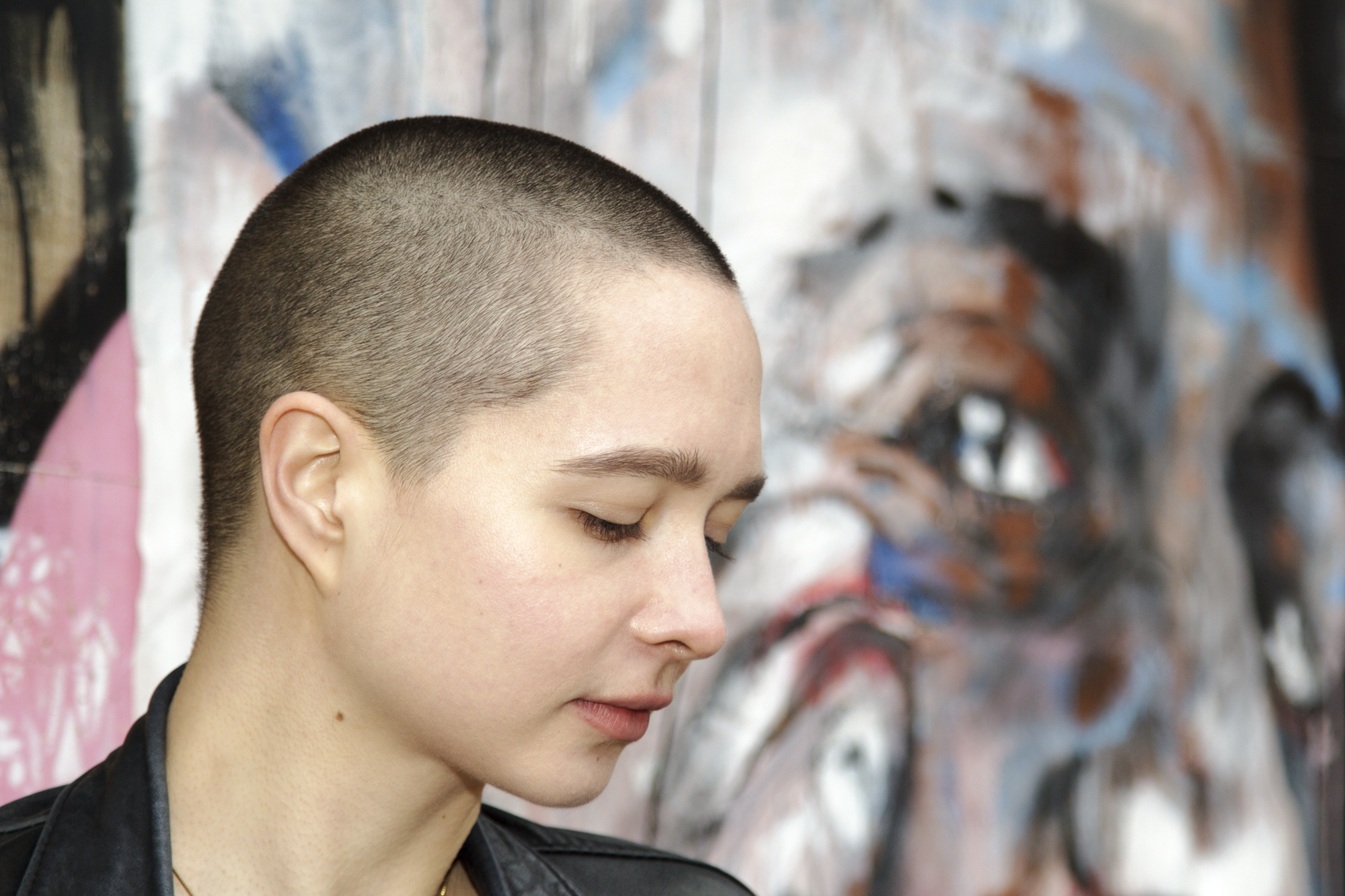 The retro, classic American interior of The Diner at the backend of Shoreditch seems like a weirdly fitting place to sit down and chat to Amy – she’s every bit English counter-culture, sporting a shaved head, burberry scarf and oversized denim jacket.

She’s pouring sauce onto her food, a signet ring shining on her dainty hand. She speaks very fluidly in a soft, inviting voice – she definitely fits into the mould of a modern poet.

Sat in our plush red booth, nibbling on a mixture of french toast and cheesy fries, she opts for a coffee, I (perhaps mistakenly) go for a pretty gigantic Long Island ice tea.

Amy Blakemore: poet, model and media analyst, is an upcoming talent on the literary circuit with her debut book Humbert Summer coming out later in the year.

Though she’s now writing under her initials A.K. Blakemore to make things a bit more gender-neutral: “I thought they were kind of cool; they make me sound like a gun.”

Her poetry can be found photographed through the glare of her computer screen and set into neat chapters via her website and on various other pages as you tumble through Google.

She’s been published by a number of magazines and zines including Poetry London, The Morning Star and FuseLit. She’s no stranger to competition either, winning Foyle Young Poet of the Year twice.

At fifteen years old she made it into the London Evening Standard for her poem Peckham Rye Lane. 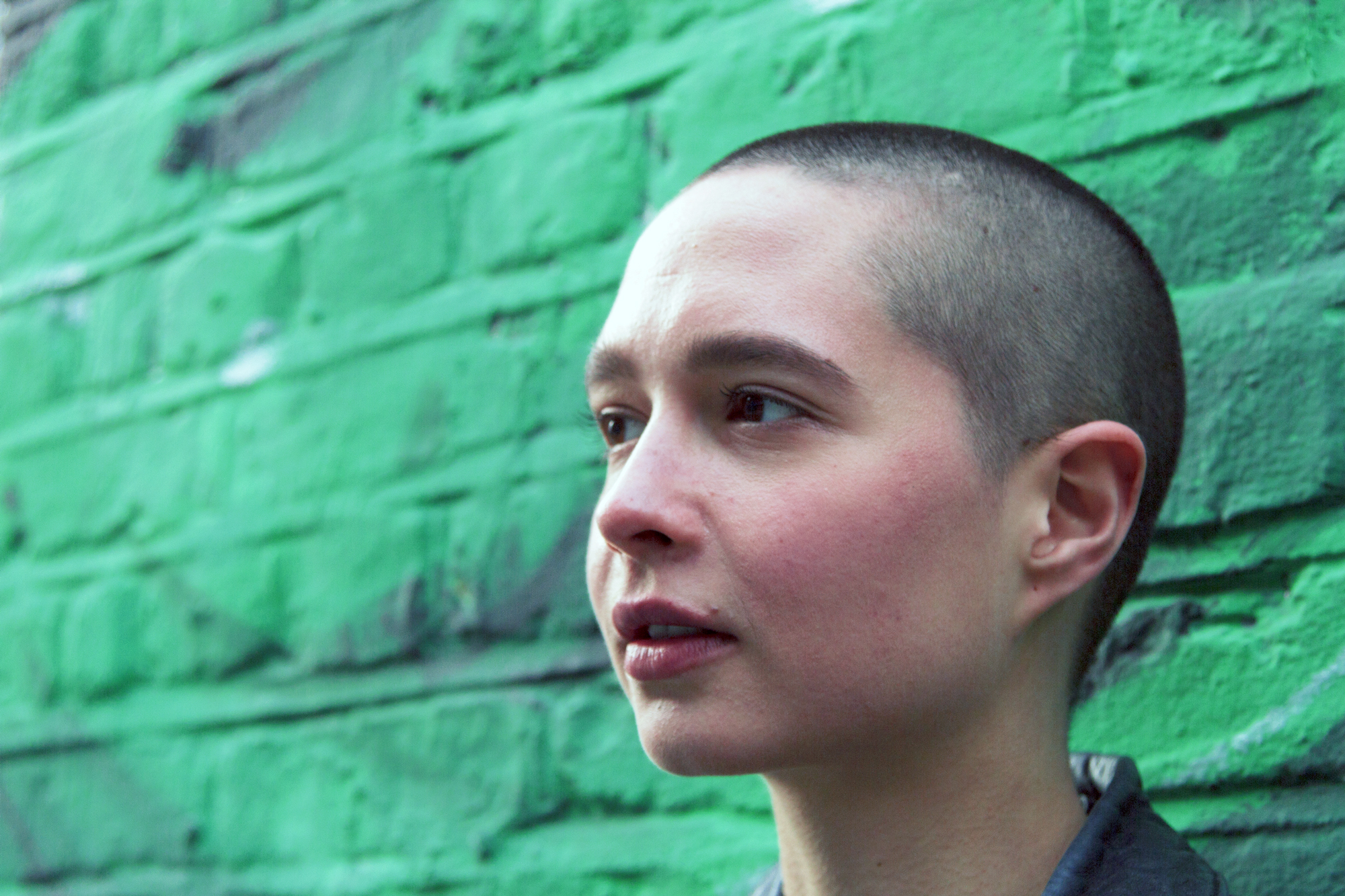 You’d be surprised at her original motivations for starting out though: “I don’t know if you know the AQA anthology of English Literature? Every A-level student goes through it, having to bear Carol Ann Duffy. I was in my smart-arsey teenager ways I was like ‘Urgh, this is rubbish!’ and my teacher said ‘You do better then Amy!’, so that’s how I started.”

Spite was the force that propelled her into writing. She tells me that her perfectionistic nature got in the way when writing prose, whereas poetry gave her more creative leverage while also catering to her vaguely OCD tendencies.

After graduating from comprehensive school in Deptford, Blakemore found herself studying Language and Literature at Oxford University.

Though quite punky in spirit and having been rooted in South London since childhood, she felt she managed to make the transition quite well.

“I’ve never really ascribed to the mystic, particularly after being there, that surrounds Oxford. The kind of Matthew Arnold, dreaming spires thing. It’s just a university and there are a lot of cunts there, haha. Probably more than most universities, actually. It’s the same kind of work. I probably felt like a small fish in a big pond at first but Oxford was the first time I met people who were into the same sort of things as me. I came out of Oxford with less of a chip on my shoulder than what I went in with… which is nice. I had my group, had my friends – kind of stuck to that.”

It also was a great opportunity to take a hold of a lot of chances to be published in various anthologies. 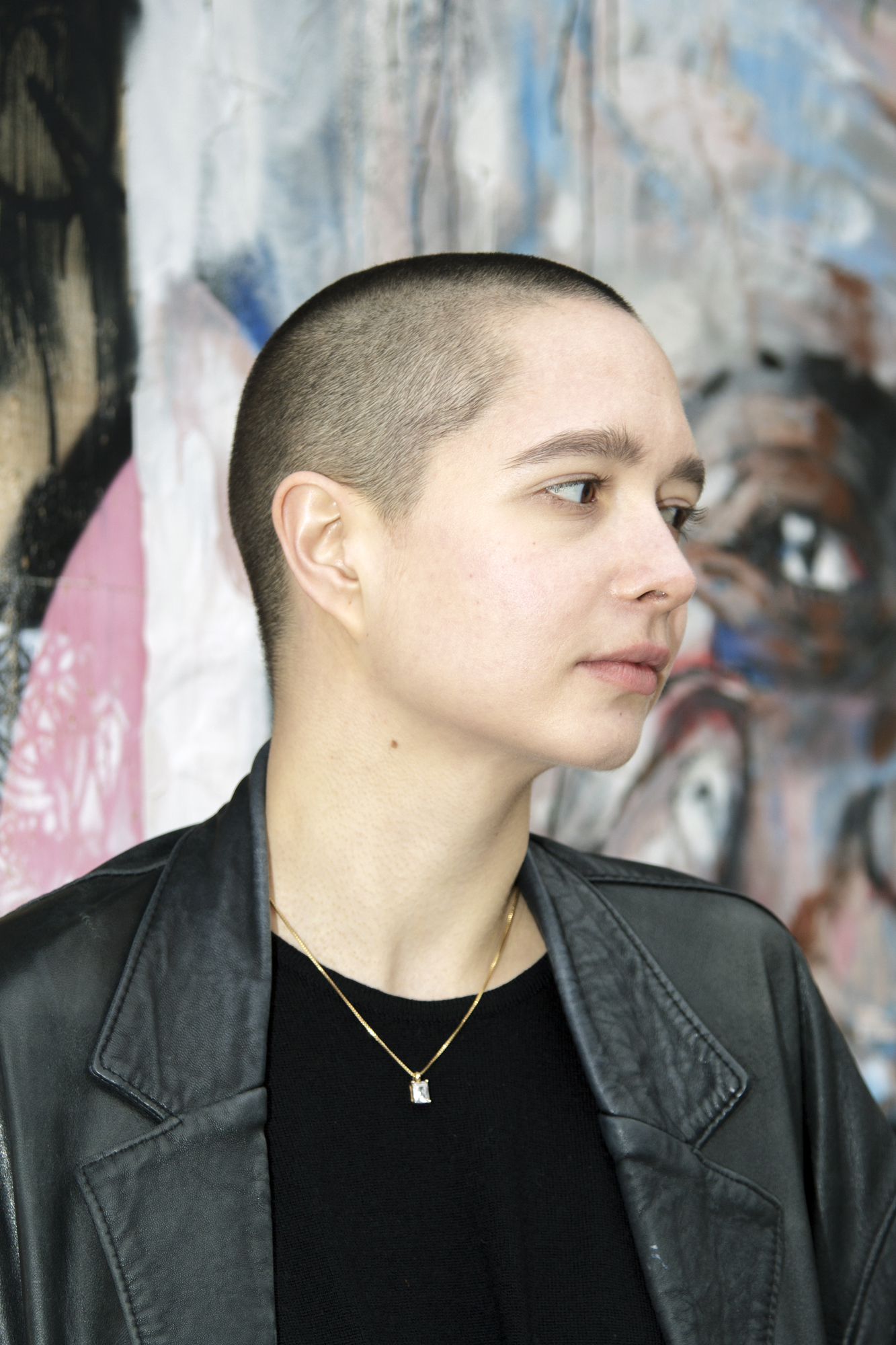 Described as ‘anti-heroine’ and ‘rebellious’ by literary judge Emily Berry, I asked Blakemore if she thinks her style is as fiery as people say: “I think so. A lot of poetry is boring. One thing I wanted to do when writing poetry was not to be boring. One way of doing that, which poetry hasn’t been for a long time, is being confrontational.

“Political and protest poetry can be but poetry that isn’t necessarily rooted in these categories that’s still shocking or a bit crass. Sometimes when you’re looking inside yourself or other people it’s not always pretty or quiet, easy or pleasant.”

Her poems explore a range of subjects, from having a broken heart, exploitation, pop-culture, sunshine and warmth to the more obscure.

She cites that a lot of her influences come from not only poets like Sam Riviere, Mary Ruefle and Emily Dickinson but also a lot of lyricists in the early days. “It’s the typical teenage story of being in your bedroom listening to Morrissey. I know there’s a couple of songwriters who have had their lyrics published like collections of poetry, more recently Jarvis Cocker. Morrissey’s pretty much my absolute favourite. As much as I listen to Everyday is like Sunday and want to feel like it’s a poem but writing songs and writing poetry are very different. Songwriters have different things to add emotional weight. The best poetry manages to create an atmosphere just through words. I mean music is the best way of creating an atmosphere of any kind and if you can do that without music then that’s pretty cool.”

She’s critical of today’s perception of poetry, and not interested in following patterns that a lot of her contemporaries are choosing to embrace: “I feel like a lot of the time you can read a poem by a contemporary poet and they deny ever having seen Friends. I kind of hate that. Also, one problem right now is probably the Internet. In terms of pure saturation it’s probably much harder for the few good to rise to the top. There’s so much. It’s quite a struggle to rise above it all. It’s just that too many people play it safe and if they don’t– it’s like there’s this binary of people like Kate Tempest and George The Poet that are kind of a bit poetry but they’re not. There’s this false set-up that you’re either stuffy and in line with the status quo or you’re not really a poet.”

Blakemore is a page-poet at heart, doing spoken word every now and then but generally finds the process a bit loathsome. Managing to hold her own at festivals like Secret Garden Party and Latitude, Blakemore prefers to let her work speak for itself.

A keen people watcher, listener and observer, she’s not the biggest believer in high-culture/low-culture distinction – that modern attitudes to celebrity coincide quite nicely with her personality.

Though she agrees it’s a lot harder to find artists to idolise these days: “We’re so obsessed with dragging these people down that I don’t think there could ever be another David Bowie, it’s hard to be mysterious. To have the kind of clout and ability to surprise, that someone like Prince did, when your album’s probably going to be leaked and when you can have your picture taken when you’re about to go to the gym is difficult. So, I suppose I find the tension around that quite interesting.” 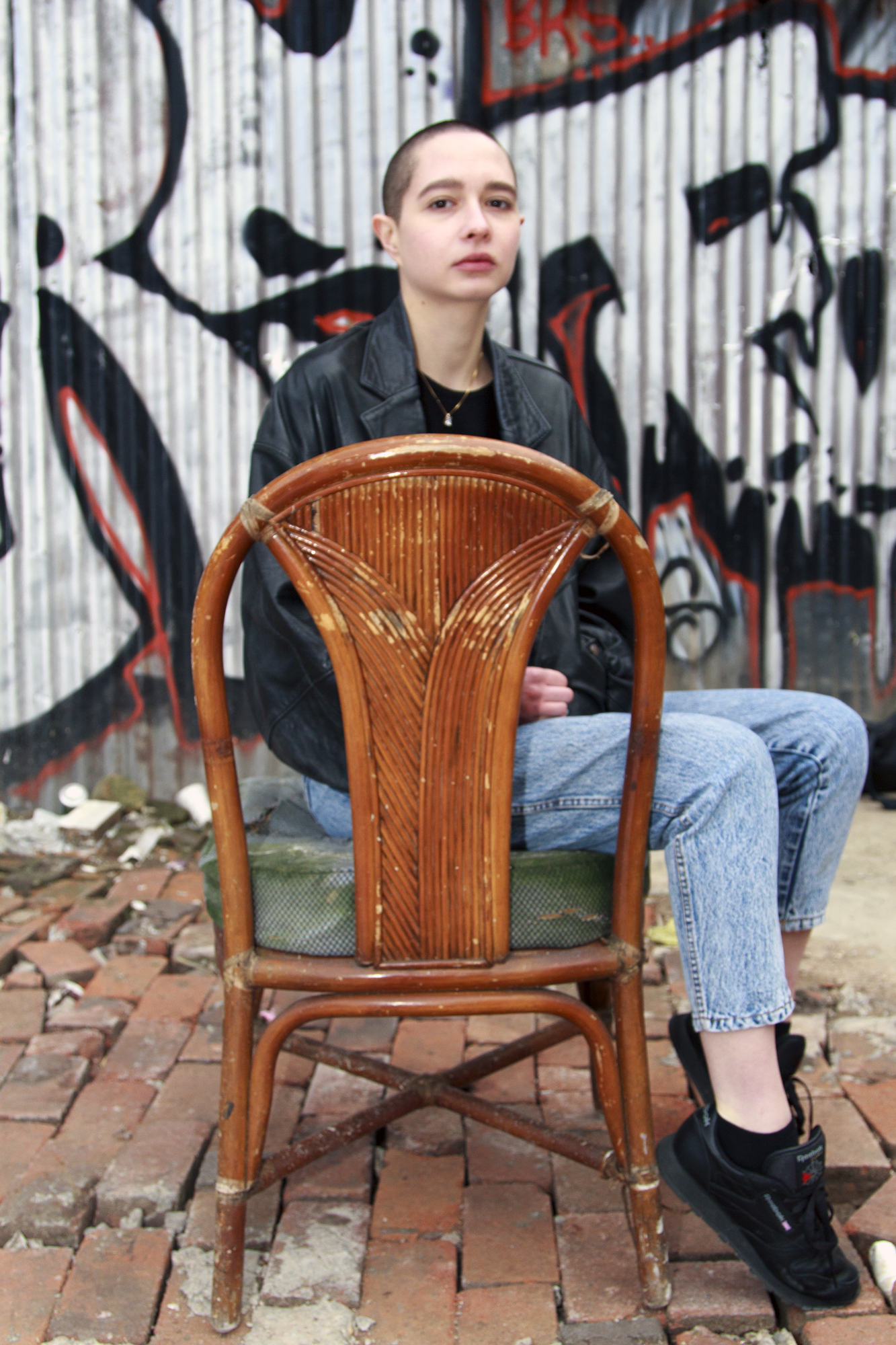 Curious to find out her process, I asked Blakemore if she’s the type of poet to carry a notebook around with her, to which she replied she mostly uses Notes on her iPhone.

Her method for defusing writer’s block is also pretty ingenious: “We have a spare room in my flat called ‘the office’. We just store stuff in there but it has a desk and a printer. I buy a bottle of wine and tell myself that the bottle isn’t leaving the office. So if I were to drink that bottle of wine I’d have to stay there, with my laptop open and Word open – and turn off the WiFi. That’s one way to get things done. And get progressively drunker as you write… which can be helpful.”

She quotes a famous line from Dylan Thomas, that a poet after two hours of work is nothing but trouble, to which she definitely agrees – telling me that down-time is an important aspect to writing, being about the chill out and soak things in.

Wondering if she gains any artistic expression and freedom through her part-time modeling, Blakemore tells me it’s more of a day job than anything else, but it still has quite a few perks: “You can meet some quite nice people and end up going to some parties with free booze. Which isn’t something to complain about!”

After winning the Melita Hume Poetry Prize in 2014, Blakemore now has the opportunity to have her poetry published in a book of her own.

It’s comprised of poetry from when she was first starting out up until Christmas time, an anthology of sorts that’s reflective of her unique voice.

After finally managing to get through the layers upon layers of cheesy chips we said our goodbyes, the poet lit up a cigarette in the deathly cold breeze and hoped for the summer sun to shine through soon.