The obscenity of wealth in office

It’s no secret that with power comes a considerable amount of wealth. Where this wealth is redirected is a debate now honing in on the questionable spending habits of certain politicians.

While some of these examples are borderline-justifiable, others are just plain outrageous.

Zimbabwean President Robert Mugabe celebrated his his 91st birthday on February 21 in a luxurious blowout costing a cool £648,000. Mugabe and his guests feasted on exotic game meat of all varieties – from elephant to impala, all while luxuriating at the Victoria Falls Elephant Hills resort.

It is argued that the celebration was a symbol of the nation’s gratitude after Mugabe’s re-election into his seventh five-year term in 2013.

But was such an excessive display necessary, given the Zimbabwean economy has been suffering from structural weaknesses since an indomitable crash in 2008?

And with the majority of the population without a job, it looks horrible when the nation’s leader seems to push the country into further despair. For years, employees collected their wages in wheelbarrows and fought each other for loaves of bread – reminiscent of a beleaguered pre-revolutionary France.

Having grown up in Botswana, I had a proximity advantage in acquiring public opinions. With Zimbabwe’s economy in shambles, the people and the armed forces believe that Mugabe should fix what he destroyed – the summary of a leader who is feared and loathed but is constantly voted into office. At this rate, a revolution against this exorbitant consumption is imminent.

Members of the UK Parliament

And how can we forget the ringing chants of ‘Rotten Parliament’ following the 2009 UK expenses scandal? With a void of £500,000, the media, particularly The Telegraph who first did an exposé on the scandal, were treated to a wealth of claims of parliamentary funds being spent on things like nannies, property renovations and gaming sets. It’s almost as if £67,000 a year is a meagre salary.

Nick Clegg famously let slip that this type of spending is nothing new: “Do I think this was a train crash waiting to happen? Yes, clearly it was. What we are seeing now is the unravelling of a system that thrived in the shadows.”

Despite the story first being uncovered six years ago, there are, to this day, more reports of ill-spending being uncovered and of MPs stepping down. Sadly, investigations into these claims are being abandoned due to the sudden disappearance and/or destruction of consumption records, to our dismay.

While being a far cry from the example of Zimbabwe, the scandal still alludes to the gall many leaders tend to have when it comes to spending. And it shows in day-to-day life; London continues to be the epicentre of the UK’s housing crisis and student woes.

The sub-Saharan’s last absolute monarch has a net worth of US $200 million (£132 million) and basks in a cornucopia of palatial estates, fast cars, submissive subjects and 15 wives. 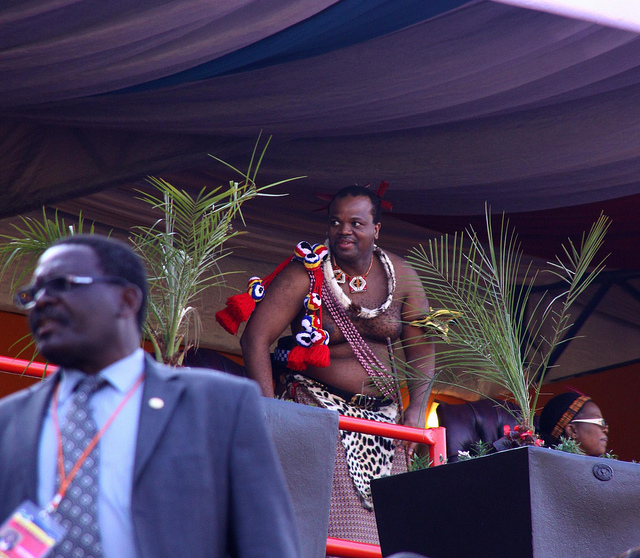 Swaziland has the world’s highest prevalence of HIV/AIDS, wreaking health havoc on the population of just 1.25 million.

Global efforts to lower these rates have made some difference, but these changes can only really take place with local government intervention and King Mswati III has done very little to encourage this despite his vows to personally eradicate the illness by 2022 and to make Swaziland a first world country.

“Swaziland is on a non-sustainable trajectory, which the king and the government will ignore at their peril,” the London-based Chatham House think-tank said.

But things are past the point of needing attention seeing as Mswati III has shown his dismissive attitude by squashing every non-violent protest with armed forces in an effort to “protect the country” against pro-democratic sentiments. His grotesque twist on Marxist infrastructure has essentially handicapped his country.

We mustn’t omit Palin; she was alleged to have spent taxpayer money on a personal tanning bed in mid-2011. The former Governor of Alaska was left red-faced (but still gloriously tanned) after a series of emails were leaked confirming the environmentally-unfriendly installation of a $35,000 (£23,000) tanning bed in her mansion.

However, it was later revealed that Palin used her own money for the tanning bed, but by then the media circus had already done its damage to an already struggling movement for female politicians. The mere rumour of misspending for reasons of vanity has fed into most people’s stereotype of ‘pretty Palin’.

The move on her part slightly dented John McCain’s presidential campaign, by whom she was nominated to be Vice-Presidential candidate. Palin has since been mocked for her choices, political and personal, by numerous comedic bodies like Saturday Night Live.

Predictably, left-wing America and the press were seething, especially after news of Palin’s stinginess surfaced. A 2014 Open Secrets report showed that the Sarah Political Action Committee donated only 5.5 per cent of $2.7 million (about £99,000) raised and three per cent of a total $1.4 million (which amounts to approximately £30,000) raised to fellow Republican candidates.

The report rounds up with: “The former governor has made only two contributions at the federal level, both of them a decade ago and adding up to a grand total of $628,” which is £415. Stellar.

So far, we’re hating these people for the right reasons. And the aforementioned examples are just a few examples of the countless leaders who take advantage of the funds at their fingertips.

Whether the circumstances border on poverty or one’s overt frugality, it’s imperative to rid society of this type of selfish tunnel vision through education, more public inquiries into state spending and allocation of state funds to parties who need it most.