Homelessness: Why we’re all to blame 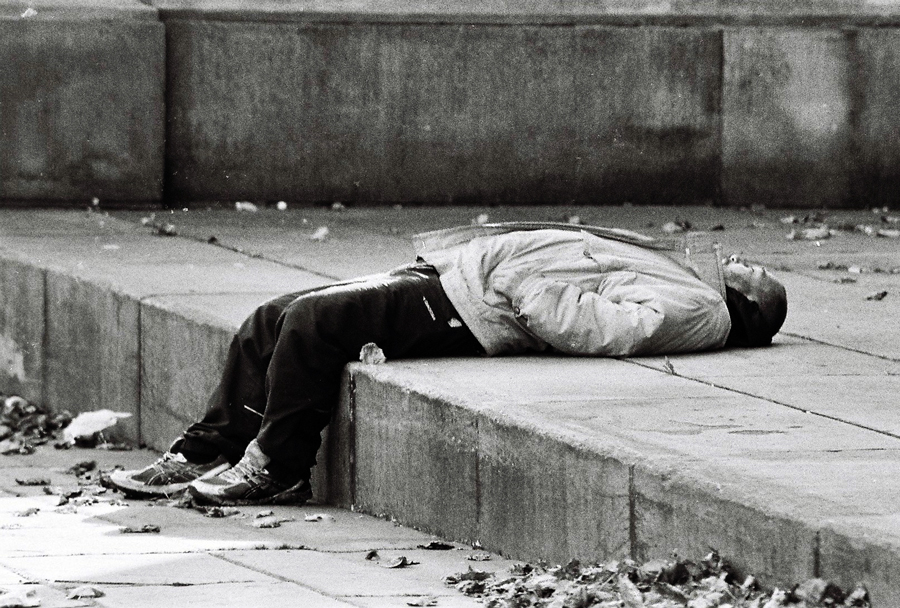 A growing awareness surrounding rising levels of homelessness in Britain, seemingly in anticipation of the 2015 General Election, is emerging.

From inspirational videos and angry articles, to a reincarnation of Spiderman handing out food to people in Birmingham– all are focusing more attention to the devastating consequences of living on the streets.

Realising that at least once a day you can see a homeless person in London is a scary reality in such a rich city. Finding that you know little if anything about the support system for people on the streets is even more daunting.

Of course, you hear all kinds of negative views such as, “they’re just a bunch of drunks”, “they choose to be homeless”, “they don’t want to work”. On the other hand, there is sympathy: “These people have lost their families in house fires” or “they’ve become bankrupt.” 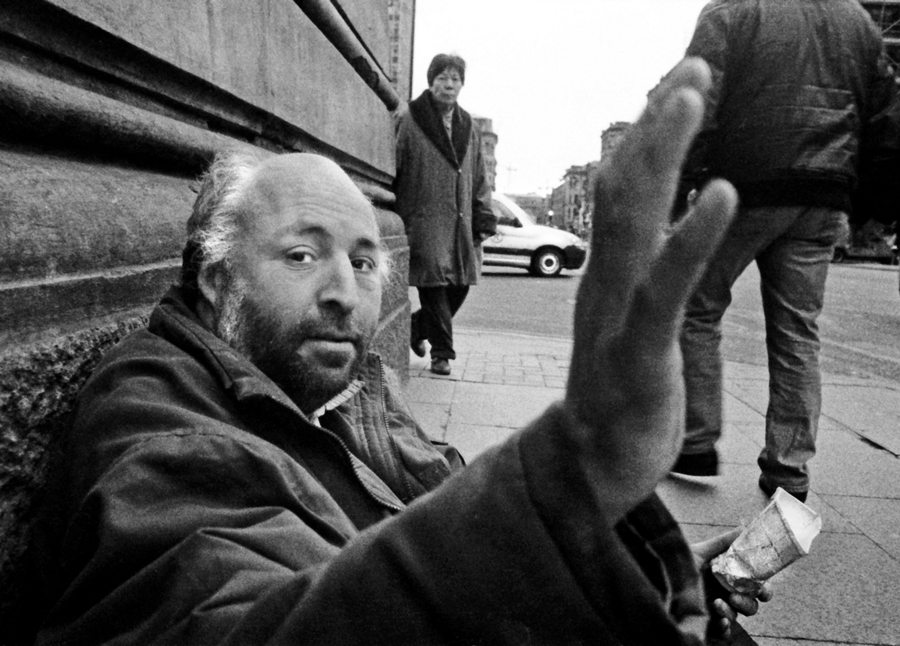 Homeless and destitute in the UK [Image by David Rothwell]

Whatever the individual stories and reasons, it’s clear to most that the majority do not choose to be homeless, and as for the drinking I’m not sure I can blame them for in indulging in alcohol to forget the privations of their existence.

So why aren’t we, as a society, doing more to help them? For many people, it’s because they don’t know how to approach the issue – but there could be a simple solution if we knew which direction to take.

In London, there are currently well over 700 people sleeping on the streets. This figure was compiled from The Combined Homelessness and Information Network (CHAIN), managed by the St Mungo’s Broadway charity, it’s a so-called “snapshot” of the number seen ‘sleeping rough’ in one night.

CHAIN has individual records of homeless people in London, as do various other organisations and charities. So why are they still on the streets? 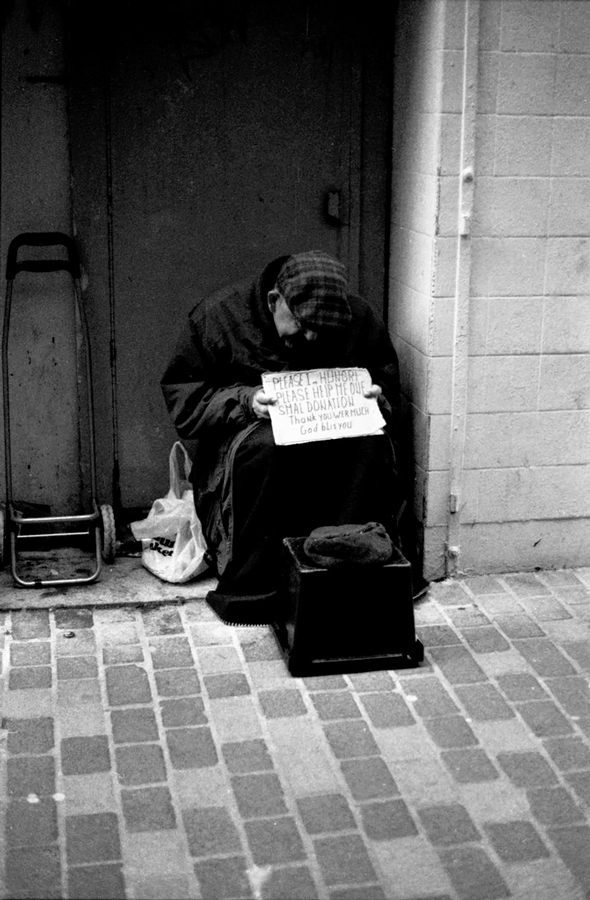 With the data being collected from a single night, it is not completely accurate, and with Mayor Boris Johnson’s No Second Night Out initiative, it’s harder to see how many people might have been on the streets of London just one night before.

The initiative means that although there was a sharp increase in the amount of homelessness, 75 per cent of them do not spend a second night on the streets. In comparison to these figures, another charity Streets Of London claims on its website that there are “around 400,000 ‘hidden homeless’ in the UK, living out of sight in hostels, B&Bs, ‘sofa-surfing’ or squatting”.

St Mungo’s Broadway, which aims to help both people on the streets or ‘at risk’ of becoming homeless,  conducted a survey of its ‘clientele’ in 2013 and found that 73 per cent of clients were male, with 27 per cent female. Some 60 per cent have mental health issues and 52 per cent have issues with substance abuse such as drugs and liquor.

In their 2015 Manifesto, clients of St Mungo’s Broadway call for: no more homelessness and much more housing that everyone can afford; more people who have experienced homelessness getting into work; and homeless people living longer.

These all seem like reasonable aspirations, but with the housing crisis biting hard in London, as increasing numbers of people priced out of the city by rising property prices and soaring rents, what chance do homeless people have?

St Mungo’s Broadway former CEO Charles Fraser said in an interview with St. Mungo’s: “Now we have really good quality buildings, with en-suite bedrooms… well trained staff and a sufficient number of staff which means that it should be possible for everybody to find a room out of homelessness.”

Until homeless people can be rehabilitated; given a bed, a shower, and access to healthcare, then they can’t get a job – which means they could never afford a home. 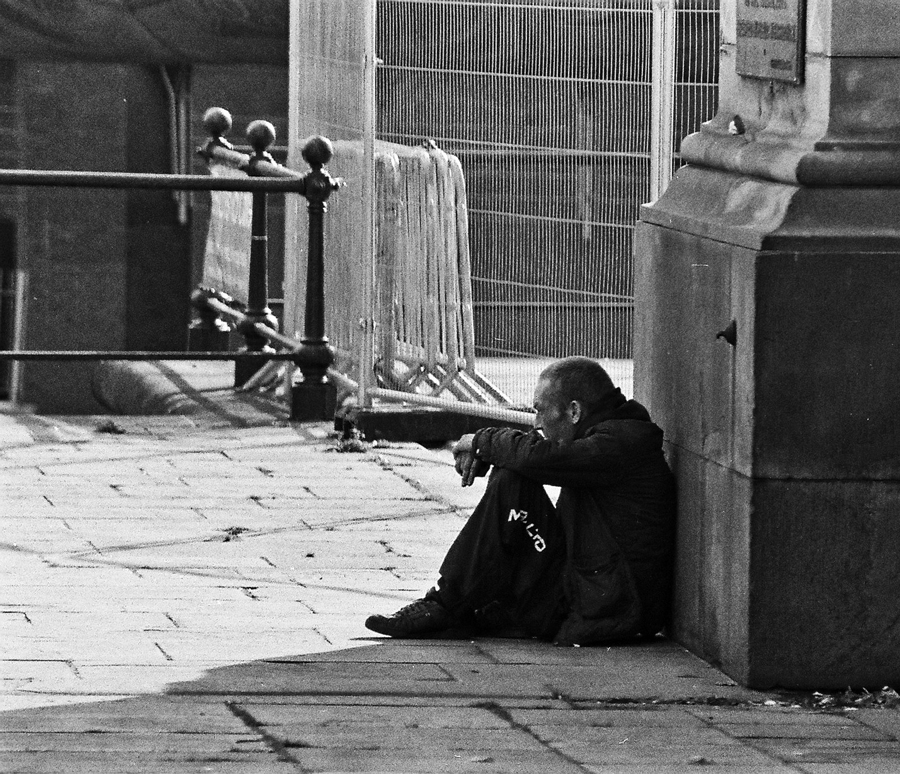 Homeless and Destitute in the UK [Image by David Rothwell]

“There’s still a lot more that needs to be done, especially in regards to health… their health tends to be neglected by the health system, and I think the services available to help long-term unemployed people into work are pathetic.” 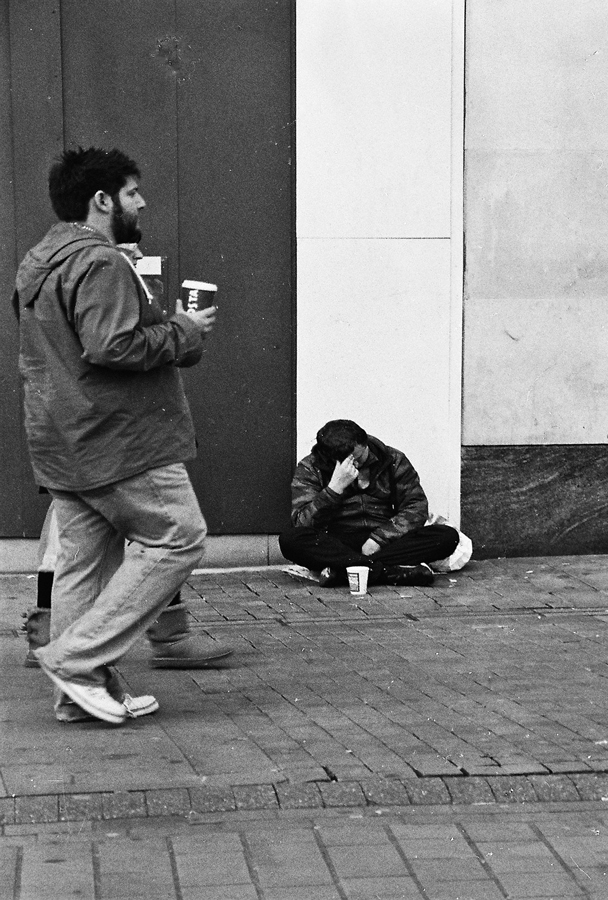 Homeless and destitute in the UK [Image by David Rothwell]

Joe, 44, a homeless man, told St Mungo’s “…people are only one pay cheque away from homelessness, nobody’s safe, it can happen to anyone, it doesn’t matter how stable your background is, you can still end up on the street…”

Many people lay the blame for the rise in homeless on a lack of action by the coalition government. It’s always an inner struggle to murmur a “sorry” with your head bowed as if you’ve done something wrong by not giving these people your money.

Not for the first time, when I gave a homeless man in the depths of the subways at Elephant and Castle a sandwich, some apples and some water, a measly £4 something from my pocket, I was reduced to tears by his gratitude.

Boris Johnson promised to end ‘rough sleeping’ by the end of 2012, instead, the rate of homelessness has actually increased, and we can all see that that target has not been met; a walk down almost any street in central London offers proof of that.

In the depths of winter it seems to be at it’s worst, and all the more painful to witness. We fight for women rights, LGBT rights, various policies that either affect us directly or indirectly. But why aren’t we fighting for people that are homeless? What about their right to health, to security, to education and work?

As Rick Henderson, chief executive of charity Homeless Link, told The Mirror newspaper,  we “should ask ourselves why it is acceptable that anyone has to sleep rough in Britain today?”.

In one of the richest cities in the world, how are people still living like this?

We aren’t as proactive in regards to homelessness as we are about, say, women’s rights. And like Spiderman giving out food, we should be helping our fellow, less fortunate citizens to survive – and get themselves off – the streets. As you go to bed at night, ask yourself: doesn’t everyone deserve to be able to do the same?