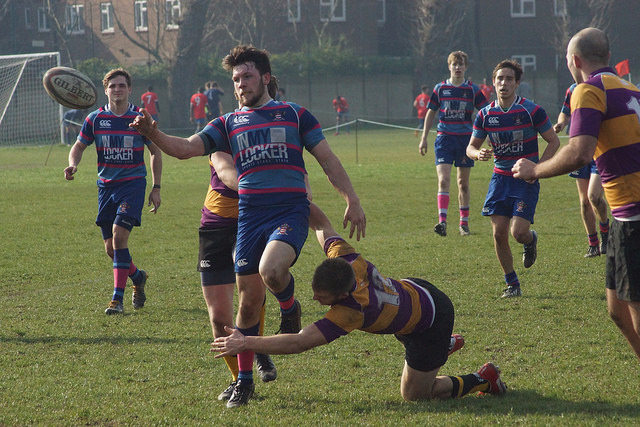 March symbolises the beginning of the end for the players in UAL sports teams. As the winter season draws to a close the last few fixtures of the season represent a final opportunity for teams to make one last push at their respective goals for the 2014/15. Whether staving off relegation or earnestly trying to wrap up promotion, and indeed everything in between, the season builds to its final crescendo this month. However, there is one event in the hectic schedule where all this pales into insignificance.

The hotly–anticipated Varsity Cup showdown between University of the Arts London (UAL) and arch–rivals Goldsmiths is without a doubt the jewel in the crown of the season’s end of year festivities.

Over March 17–18 the majority of sports under the UAL/Goldsmiths banner do battle in an annual, winner-takes-all tournament that sees the victor claim the much-coveted Varsity Cup for another year. Set up in a match play format a total of 13 fixtures are played out over the two days, with each fixture representing one point and the team collecting the most wins walks away with the victory, and crucially bragging rights, for another year. So far its UAL 5, Goldmsiths 3, with one challenge drawn.

The ninth edition of the Varsity Cup sees the fierce rivalry between two of London’s premier arts universities begin proceedings at both Haberdasher’s College and Deptford Green school, with indoor sports badminton, basketball, cheerleading and volleyball taking the stage on day one. Attention turning then towards the illustrious Quintin Hogg Memorial Sports Ground in Chiswick on the second day where football, hockey, rugby, netball and, ultimately, Ultimate Frisbee will be staggered throughout the day, in what has always proved to be a thrilling finale.

Since its inception in 2007 the Varsity Cup has seen the two universities enjoy a healthy if intense and competitive rivalry, which soured considerably last year when the event finished in controversial circumstances. For the first time the Cup ended in a draw. Goldsmiths were clearly unhappy about what their student publication The Leopard headlined as “The Arts Cup in first ever draw after a myriad of mess ups”. A number of allegations were levelled at UAL throughout the article including last minute changing of venues, coaches and other ineligible players playing for teams, changing of match rules midway through games and biased refereeing.

Honor Severs, SUART’s Sports and Activities officer, refutes all of the claims, and has defended UAL with this year’s competition looming: “After reading through (the) article published by Goldsmiths, it still humours me the ‘finger pointing’ they made about our University and sports teams. I am aware that last years ‘myriads of mishaps’ begun with Goldsmiths’ netball teams turning up late. There was no apology or sense of urgency stating that ‘we weren’t told the start time had changed’. Regardless, constant emails and phone calls were made weeks before the event was due to kick off.”

Severs continued by saying that very little seems to have changed: “We have seen familiar attitudes this year with Goldsmiths’ stating at first that they only had one netball team, and now, a week before the big event have managed to source another full team. We are still awaiting fixture time confirmation from Goldsmith to respond.”

Speaking to The Leopard last year, the then Goldsmiths SU president Conrad Grant said on the subject of some of the games ending acrimoniously that: “As a result it was agreed that all future communication between SUARTS and Goldsmiths Students’ Union should include both of the respective managers (of each sport)” He went on to assure participants that this year would be very different and that “The Union’s Activities Team is working closely with SUARTS to ensure that future Varsities encompass more sports and occur more smoothly,” According to other sources at SUARTS this hasn’t necessarily been the case. Venues, rule changes and even the total number of teams competing had still to be determined less than a week from kick off.

It remains to be seen as to whether this year’s Varsity Cup will in fact be the last time the two universities face off against each other after last year’s shortcomings and subsequent finger pointing clearly left a bad taste in the mouth. Severs punctuated the point, emphasising that perhaps UAL had in fact just outgrown Goldsmiths, “Despite inaccurate disputes on the day, the rest of the athletes’ demonstrated great sportsmanship showing to be worthy opponents. It is a shame that this year’s Varsity was not prepared for as we had hoped. I see this purely down to the fact that Arts’ sports in growing, and rapidly at that. Our students are able to put out more teams, more sports and the opponents seem they are not ready for that.”

By Taysan Ali-Osman
5 Mins read
The story of two students who have been struggling due to the cost of living crisis.
Environment

By Hamida Ali
4 Mins read
A Just Stop Oil protester, who has been actively causing significant disruption in the UK for the past few weeks,…