Losing yourself in Fez’s old Medina 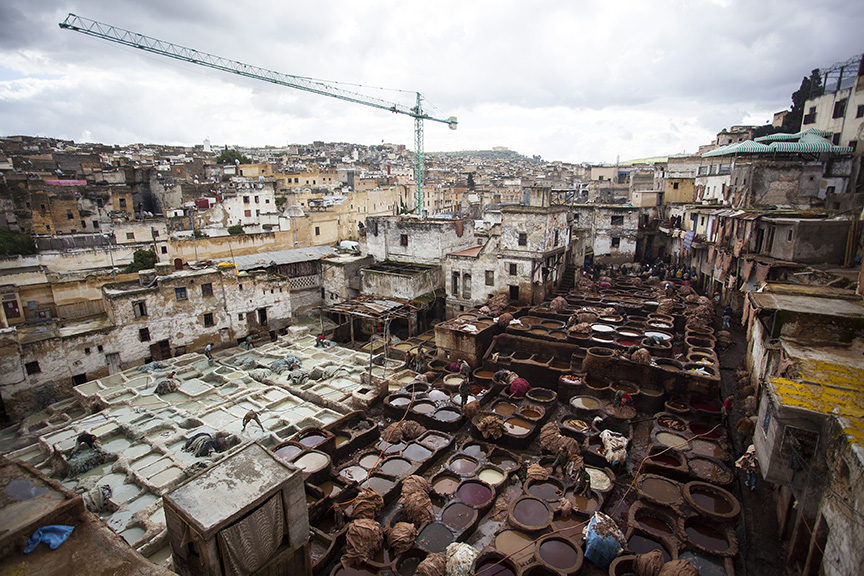 The haunting sound of Adhan echoes across the sky, the call for the fourth prayer of the day, Salat al-Maghrib.

It’s a melody so beautiful that it’s impossible, just for a moment, not to be transfixed by the sound. Across Fez the horizon dips to a deep shade of pink, the last few rays of sun setting behind the surrounding mountains.

Inside the city, this image is far from mirrored, the chaos is constant. Locals haggle in a mix of Moroccan, Arabic and French for an endless choice of merchandise; rows of colourful woven scarfs, live chickens tied up above their coops and handcrafted berber-silver jewellery is hung up in an array of intricate designs.

There are three main districts in the city, Fez el Bali (Medina), El Mellah (Jewish Quarter) and Ville Novella (New Town), most who visit stay in the confines of Fez el Bali, the oldest part of the city and easily the most impressive.

With more than 9,000 alleyways twisting through the Medina, minutes quickly turn into hours wandering the streets. It’s possible to get a guide to show you the best routes through the maze, but isn’t getting incomparably lost part of the fun?

Walking through the Medina is like falling down a rabbit hole into an ancient world, one that dates back to the 11th Century. Nothing much has changed between now and then, which is why these streets have been named a world heritage centre by UNESCO.

The walls of the medieval warren are deep terracottas and browns, stray cats fight each other in the street and donkeys ladened with heavy packs meander through the crowds.

“Five times a day the sound of Adhan rolls across the city… for a short time the chaos subsides.”

Though there are many entrances to the Medina, Bab R’cif’s staggering beauty of Islamic style mosaics ensure it’s one that stands out from the rest.

Commonly known as the Blue Gate, it leads onto the chaotic R’cif market. Camels’ heads hang outside the shop of the one who butchered them, broods of chickens gather, waiting to meet their fate alongside the vast assortment of meat and vegetables on offer by the rows of tradesmen.

On Sundays the alleys fill with the sound of childish giggles and chiclets chirp as men set up stands filled with baby chicks dyed shades of pink, blue and yellow, bought for a few Dirhams by parents as a gift for their children to raise as their own.

Walking through the twisting lanes, the famous tanneries can be smelt long before they are reached. It’s one of the oldest working leather tanneries, first used in the 11th Century, with techniques passed down through generations to produce some of the finest leather work in the world.

A mint leaf enclosed in a top pocket can help to deter the stench of the pigeon dung with the best viewpoints being found at the tops of the leather shops which stock the finished produce.

Down below in the tanneries, men climb knee deep into the vats of brightly coloured red, white and yellows working the animal hide whilst every surrounding roof is ladened with skins drying under the sun.

Kairaouine Mosque, the second largest mosque in Morocco and designed by Fatima al-Fihrirests, sits in the heart of the Medina. Throughout the years shops and hammams have grown around it leaving its facade unrecognisable.

The only clue to what lies behind the walls are the grand archway entrances that open up throughout the day, giving a peephole for non-muslims to glimpse into the courtyard at the archaic arabian architecture which dates back to 857 AD.

Five times a day the sound of Adhan rolls across the city. As the speakers in the minarets crackle into life, the mesmerising song starts to play out, and for a short time the chaos subsides.