Amir Khan, Mo Farah and Moeen Ali all have one thing in common beyond the fact they are all successful sportsmen at the highest level – their Muslim faith.

At a time when negative perceptions of the religion are rife, fuelled by media coverage of ISIS and acts of terror carried out in the name of Islam, this talented trio are role models for a tolerant, multicultural Britain.

Welterweight boxer Amir Khan does much for charity and has also established his own foundation to help disadvantaged young people around the world as well as supporting emergency aid following natural disasters.

He had recently visited the school in Peshawar, Pakistan, where Taliban extremists killed 145 people, including 132 pupils, and after his fight with Alexander donated the valuable shorts to raise funds for those affected.

He also visited a hospital where two injured students were still recovering, and told The Daily Star: “With what terrorists are doing to the image of Islam and to the image of Muslims, there is a time to stand up and speak out.

“I’ve got a daughter myself now. I went [to Peshawar] because I wanted to tell those kids they need to overcome fear and get back to school. That’s how you make something of your life. You can’t let terrorists win.” 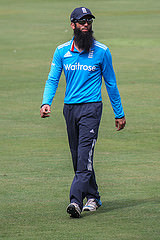 England cricketer Moeen sparked headlines last summer when, during a Test match, he wore wristbands in support of Palestinians in the Gaza Strip at a time when hundreds were being killed in the conflict between Hezbollah and Israeli forces.

He was warned against doing it again by the International Cricket Council, whose rules do not allow ‘political, religious or racial messages’ to be worn during matches.

Moeen told The Huffington Post that being a Muslim is “everything to me. It means so much to me, my relationship with the creator, following the Prophet.”

The cricketer has been named a British Asian Trust ambassador for the charity’s work in Pakistan.

Like Khan, Olympic 5,000m and 10,000m champion Mo Farah has also established a charitable foundation that bears his name.

The Somali-born athlete told The Independent: “You’ve got to believe in God. Everything happens for a reason, so you shouldn’t get wound up. I think the way I am, the way I’m chilled out, has a lot to do with being Muslim and having faith.

“It also says in the Quran that you must work hard in whatever you do, so I work hard in training and that’s got a lot to do with being successful.”

[pullquote align=”right”]’Before and after every fight, I pray – it makes me feel so much better, it helps my nerves’
Boxer Qais Ashfaq[/pullquote]

Sports fans have become used to the sight of Muslim athletes praying, and many clearly feel spiritual strength plays a role in their success.

Rizwan Hussain, a priest at the Bashir Ahmed Mosque in Southampton, believes that Muslims sports stars are definitely helping to present a positive image of their religion. “They are Muslims and they are well known, and this is something that attracts people towards Islam,” he said.

Hussain told Artefact that since the time of the Prophet Muhammad, people have looked up to and been inspired to lead better lives by prominent Muslims in their societies.

“With a personality such as Amir Khan, others look towards him and say ‘He is he a Muslim, we want to be like him, he’s a good representative of the religion’. That also puts a lot of pressure on the likes of Khan to be good representatives.”

Hoping to follow in Khan’s footsteps, both in the ring and as a Muslim role model, is England’s 2014 Commonwealth Games boxing silver medallist Qais Ashfaq.

The Leeds fighter told Artefact: “First and foremost, we have to thank Allah (God). To be honest, Islam has done a lot for me, especially in terms of boxing because it has always made me believe in myself.

“Before and after every fight, I pray – it makes me feel so much better, it helps my nerves. It make me mentally confident and physically confident. Little things in that belief in God it makes a difference and makes the world a better place.”

Ashfaq has already got his eyes on more success in the ring and hopes to represent Great Britain at the 2016 Rio Olympic Games before turning professional and taking the path of Khan, Farah and Moeen.

By Alexandra Andronache
9 Mins read
How Muslim women living in the UK are working together to tackle Islamophobia and sexism.
Politics

By LukHA
3 Mins read
When French secondary school teacher, Samual Paty, was murdered at the hands of a radical terrorist, France braced itself for what would happen next.
Life

By Daisy Dalgliesh
8 Mins read
Abused and manipulated by her family, the story of one girl who managed to escape.