Peter Doig: The making of a modern master 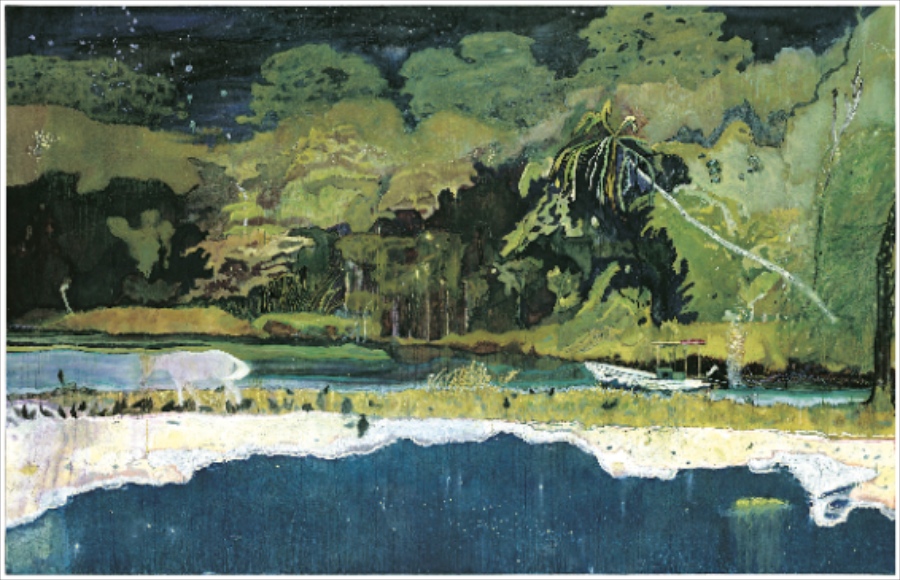 Peter Doig’s paintings invite us to gaze into mysterious landscapes, to visit worlds of intense colour and lush, rich textures, leaving us somewhere between dream and reality.

He’s an artist light years away from the flashy kids of the Young British Artist era and the glitz of the art world, putting his art at the centre rather than himself, a man seemingly always on the move yet not belonging anywhere.

Some say that if there’s a legitimate successor to the great colourists in the vein of Matisse, Bonnard and Hopper, then Peter Doig might be it.

Here’s a look at the artist behind the million pound price tags, his formative college years in London – and how he went on to reinvigorate the medium of painting.

It’s hard to read an article about Doig without seeing words like “record-breaking” or “millions” – and it’s equally hard not to mention it at all: Doig swung into global prominence in the mid-2000s when his paintings began to sell for astronomical figures.

In 2007, his painting The White Canoe sold for £5.73 million to an anonymous Russian collector – at the time a salesroom record for a living European artist.

It marked the moment Doig went from being a largely unnoticed, albeit critical success, to a name on the commercial art stage.

Overnight, a painter who in many ways had been the very antithesis of flashy celebrity art culture, almost became an unwilling poster boy for everything wrong with the art industry.

The huge prices didn’t stop there: In 2013, Doig’s The Architect’s Home in the Ravine sold for £7.7million at a London auction.

Doig commented that the staggering price for The White Canoe made him feel “physically sick”. Not because the money didn’t go into his own pocket; the painting was owned by Charles Saatchi, but because to him it seemed a sign of an art market gone crazy.

Those huge price tags are something he still seems to struggle to come to terms with – success in art can’t be measured in money.

Born in Edinburgh in 1959, his father a shipping accountant and his mother an actress, his family moved to Trinidad in 1962 and then to Canada in 1966.

Having moved so often and lived in such different places, Doig’s use of intense colours is as far removed from the bleak skies of Scotland as he is.

Doig’s work has drawn from his snowy childhood years in Canada, with a number of his works depicting scenes of swirling snow, glittering blizzards and frozen lakes, and with other works drawing heavily from the humid, saturated colours of the leafy nature of the Caribbean.

Doig seems hesitant to pledge allegiance to a specific country, to be pinned down to one place.

In interviews, the accent cutting through his soft-spoken voice is hard to place. Many Scots would of course like to claim him as their own, as a “Scottish painter”, but Doig doesn’t seem to want to be labelled that way.

In an interview with The Guardian he explained, “when I was growing up, I never felt that I belonged anywhere because we never lived in a house for more than three months. That’s all I knew and that’s why I don’t really belong anywhere. Then again, I do feel Scottish in some way. Maybe it’s to do with visiting my grandparents here every summer as a child, but I am aware of my Scottish ancestry. It’s there all right, but it would be pushing it to label me a Scottish painter. Or, indeed, an anywhere painter.”

Doig started to draw seriously at 17, as a way of dealing with the sense of dislocation he felt working on a gas-drilling rig on the Canadian prairies.

He realised the job was not something he wanted to do for the rest of life, especially considering many of his colleagues on the platform had lost fingers on the job. So, he started to draw at night. It was also there he got the idea that he should go to art school in London.

He did a foundation course at Wimbledon School of Art, before being accepted for a painting degree at St. Martins

It was during those years at St. Martins, 1980 to 1983, that he’s said he started to find his voice as an artist, after having initially felt intimidated by the too-cool-for-school air of the college.

Doig has described his formative college years in London as a mad, exciting time, one when the city was full of oddballs and artists.

To support himself he did bar work and worked as a dresser at the English National Opera. He was living a bohemian life in a rough flat in King’s Cross that cost £4 a week, with Shane McGowan living down the road.

This was at a time when London was cheap enough to allow young artists to waste both time and space in order to find their artistic voices – a London that doesn’t exist anymore.

Gavin Lockheart, himself a successful painter of luminous landscapes, met Doig while studying at St. Martins in 1980 and they’ve been friends since.

He recalls how they connected: “We liked the same music and at the time that was more important than liking the same art, because we didn’t know much, but we were very receptive.”

What kind of music were these two budding artists into then? “We loved early rap music before it was called hip hop. We saw Grandmaster Flash in New York and Lee Dorsey in New Orleans, in 1982. The good thing about Peter is that he is very catholic in his taste; we even got to like opera when we worked at the English National Opera.”

Many articles about Doig have often stated he chose to study in London because it was the home of his favourite punk bands, but Lockheart says that wasn’t the case: “He wasn’t a big punk fan; I liked punk more than him I think. He likes music loud but not noisy, which punk often was. We both liked the blues and he also introduced me to Hank Williams, Louis Jordan, Louis Armstrong, Duke Ellington, Professor Longhair: he liked jazz more than me. We saw too many bands to list; there were loads playing in London at the time. Kraftwerk, Pere Ubu, The Fall, Kid Creole, Captain Beefheart.”

After St. Martins Doig went back to Canada to live in Montreal, but returned to London and Chelsea College of Art in 1989, this time as a mature student to do an MA.

It was an odd time to be a painter. The phenomenon of YBAs (Young British Artists) and the conceptual approach typified by Damien Hirst and Tracey Emin began to emerge in the 90s, and painting was largely seen to be spent as a medium.

The press was brimming with articles about the “death of painting” and many artists started to move away from traditional art to embrace the new ways, a re-commodification of art that had more of a promise of commercial success.

Doig was selected for the Barclays Young Artist Award at the Serpentine gallery in 1991, made up of the most promising artists from the London MA shows.

Doig’s work looked vastly different from the other works on display and some of the other artists didn’t even want to show their art in the same space as him.

It seemed a notion amongst them that Doig’s work was somehow an unfashionable throwback, or not serious enough for the look-at-me style of the 90s art scene. Luckily, such frosty receptions didn’t seem to knock down the artistic sureness Doig had developed by then.

Damien Meade, an Irish-born painter working in London, studied at Chelsea in the early 90’s when Doig started working as a visiting tutor and describes him as a friendly, generous and centred individual. He explains how Doig’s style felt fresh in a time when painting was largely seen as an exhausted medium.

He recalls, “a lot of the painting in the 80s had been about a sense of bravado – big themes, big egos, and showing off. It had this bombastic, machismo quality to it. And Peter’s work was refreshing at that time. He found a way of painting that made it new again in some way. It had a silence about it. It was cinematic, almost feminine.”

Doig’s painting Blotter won him the John Moores Prize in 1993, and marks his first break and big recognition as an artist. The painting depicts a lone young figure, based on a photograph of his brother, staring down on a frozen lake.

What Blotter is trying to capture is the activity in the mind while the body is still, the mind allowing itself to be absorbed in the landscape. The recognition he received from that lead to him being nominated for the Turner prize in 1994.

The title Blotter is a direct reference to LSD and Doig has been quite open about occasionally taking it as a teenager.

He has said that those psychedelic experiences have been important to him and his art, but that probably only people who have themselves taken LSD could really understand how it has affected his work. He stopped taking psychedelics at 18, but it has remained a reference point for his artistry.

Doig returned to Trinidad in 2002 and set up a studio at the Caribbean Contemporary Arts Centre near Port of Spain. In his current paintings his childhood’s snowscapes of Canada has largely been left for the warm hues of the island. His painting Grande Riviere, (shown at the top of this article) is his first painting set in Trinidad.

It’s a tropical and somewhat exotic scene of unusual, deep colours. The dense vegetation along with the lack of human presence makes for an eerie and unsettling landscape, and Doig plays with the romantic cliché of a wandering horse on a moonlit beach.

The idea for the painting came about during a visit to Trinidad in the summer of 2000. He took some photographs of the lagoon in Grand Riviere and painted his own haunting vision of the scene when he returned to London.

In 2008, he had a major solo exhibitions at Tate Britain, the event truly cementing his reputation as an artist and introducing him to a wider audience.

He has since had numerous exhibitions the world over and has kept challenging his approach to painting – themes keep coming back to him, and his subjects and compositions move forwards in ways we can’t guess.

Doig is back in Trinidad and painting away, currently preparing for a show in Venice in May.

We don’t not know where Peter Doig might lay his head next, but we can expect to continue to be both unsettled and spell-bound by his enchanting visions. This rolling stone might just end up being one of the true colour masters.

Artwork goes under the hammer for refugees