Chanel Joan Elkayam’s show at Milan Fashion Week Autumn/Winter 2018 is not just notable in the world of fashion because she is only 20 years old – in an industry that usually requires years of unpaid internships and endless shadowing to achieve half of what this young designer has – but she is the youngest person to show at the four major fashion weeks. A remarkable feat for anyone, let alone someone who is barely out of their heady teenage years and who is still studying Womenswear at Central Saint Martins.

Although her achievements are remarkable, there was indeed nothing extraordinary about this late February day in Milan. Overcast and persistently drizzling. Milan has a reputation for being a scenic city; however, just like the fashion hubs of Paris and London, it struggles to fulfill this when the sun is not shining down on the city’s spider web of avenues and renaissance architecture.

The show, entitled Nonna (“grandmother” in Italian), was inspired by Elkayam’s grandmother who passed away in May of last year. Elkayam’s grandmother was forced to flee Tripoli in the 1940s due to the fear of fascism and the anti-semitism imposed by Mussolini and Hitler during the Second World War, and it was this harrowing story that formed the main reference points for the Nonna collection.

“She meant a lot to me,” Elkayam said. “When Nonna passed away I said to my mum that I want to do a collection dedicated to her. She has an interesting story, in a way, if she didn’t run away from the Nazis with one bag, I wouldn’t be here. I thought it was so powerful as a story. I like to show emotion in my shows, but it is also part of my aesthetic as a designer. This collection was dedicated to her and her touching life story.”

The music started, signaling the beginning of the show, the pluck of harp strings and the soft billow of a horn as the first look came out from backstage. 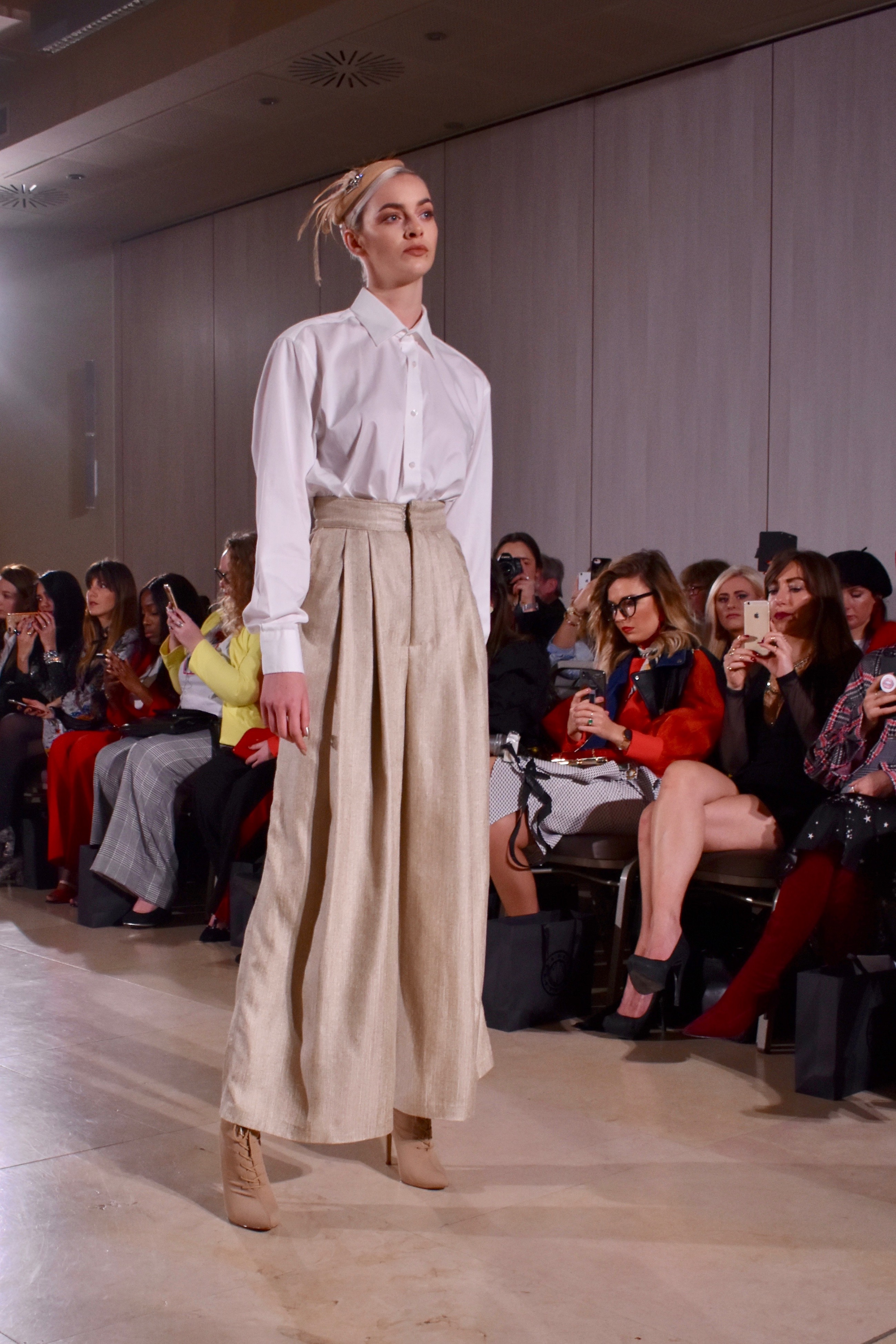 The opening look from the show

The first couple of looks were safe; tailored business wear. Simple white shirts and pleated flared trousers. Elkayam says: “I really enjoyed tailoring this collection. We had a tailoring project at university that I got really into. I like couture, but I also enjoy business wear. I want to experiment with it a little bit more, you can do anything with it.”

Next, a skirt on one outfit and a jacket on the next made from the same spiral print fabric. “In some way this fabric reminded me of my grandmother’s house. The rugs.” There was a personable glimmer of emotion as she spoke. “The fabric was not a fabric though; It was a sofa fabric, it was so thick my sewing machine needle broke about 15 times!”

I wanted to find out more about her knowledge of the female form and how this has changed in the last 12 months. “I still focus on the female form as it’s part of my aesthetic, but there were a lot of trousers with wide legs and some drapery in this collection, quite complicated drapes. More experimenting this season, but again still highlighting the female form.”

Intrigued by the trousers Elkayam mentioned, I asked what the inspiration was behind them. “When my grandmother was growing up, the men had quite baggy trousers that they would have to tuck into their knee-high boots; it made a quite interesting shape. I looked at it and thought it would be interesting to take that shape but make it into a womenswear trouser. I ended up making three different styles.” 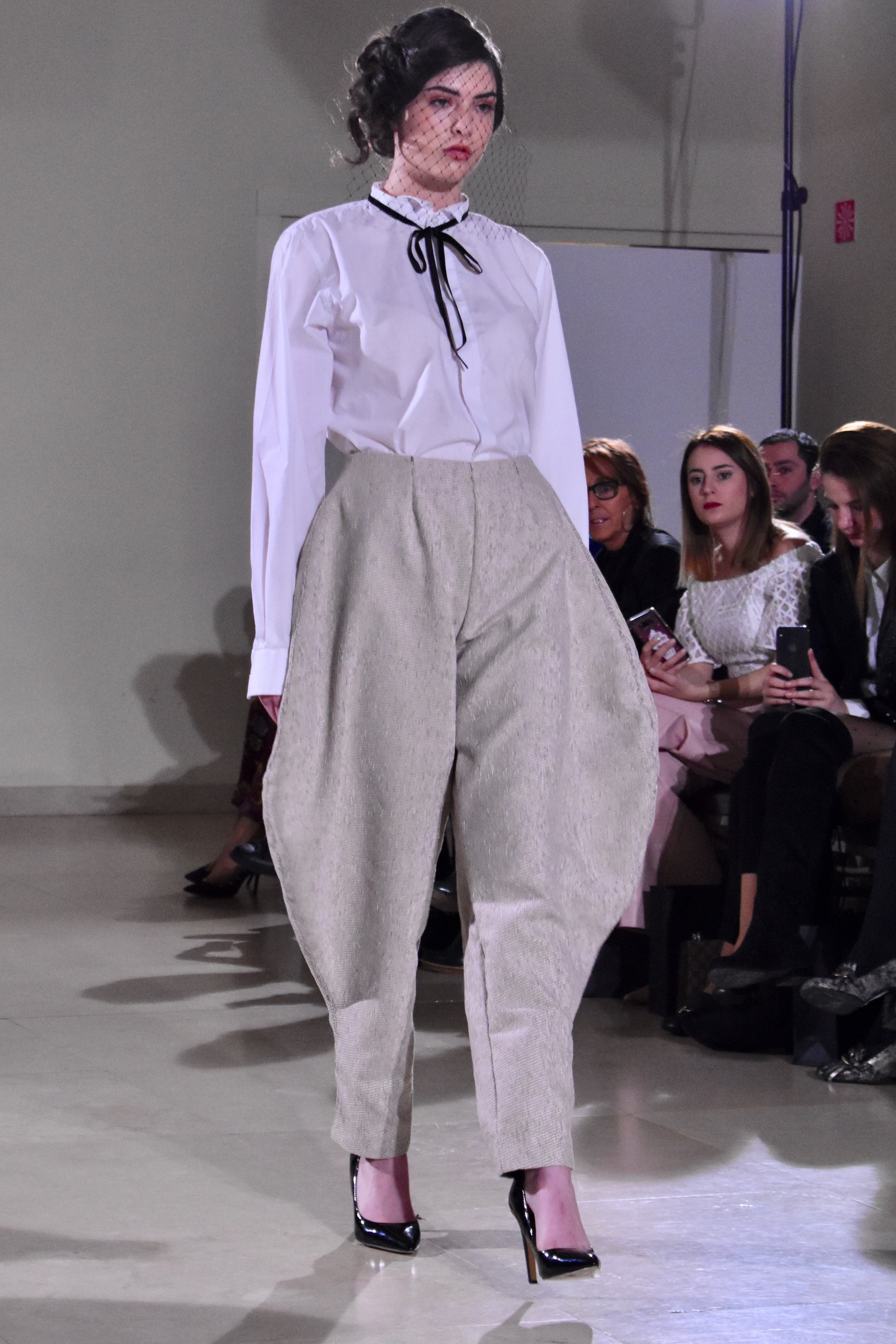 Two of the looks that followed were deconstructed in their design. Elkayam informs me of their creation. “It’s a collar and a lapel, so it’s more like a front of a jacket, but I have done it as a sleeve and on the legs. Using the collars and lapels in places that they wouldn’t usually be used. I was experimenting with the cuts a lot to make the collection really unique.”

The general atmosphere of the show stepped up a gear in the second half. The music, titled Jerusalem of Gold, entered a crescendo. The designs switched from business wear to elegant dresses, in all manner of shapes, many of which audiences had never seen the like of from Elkayam. 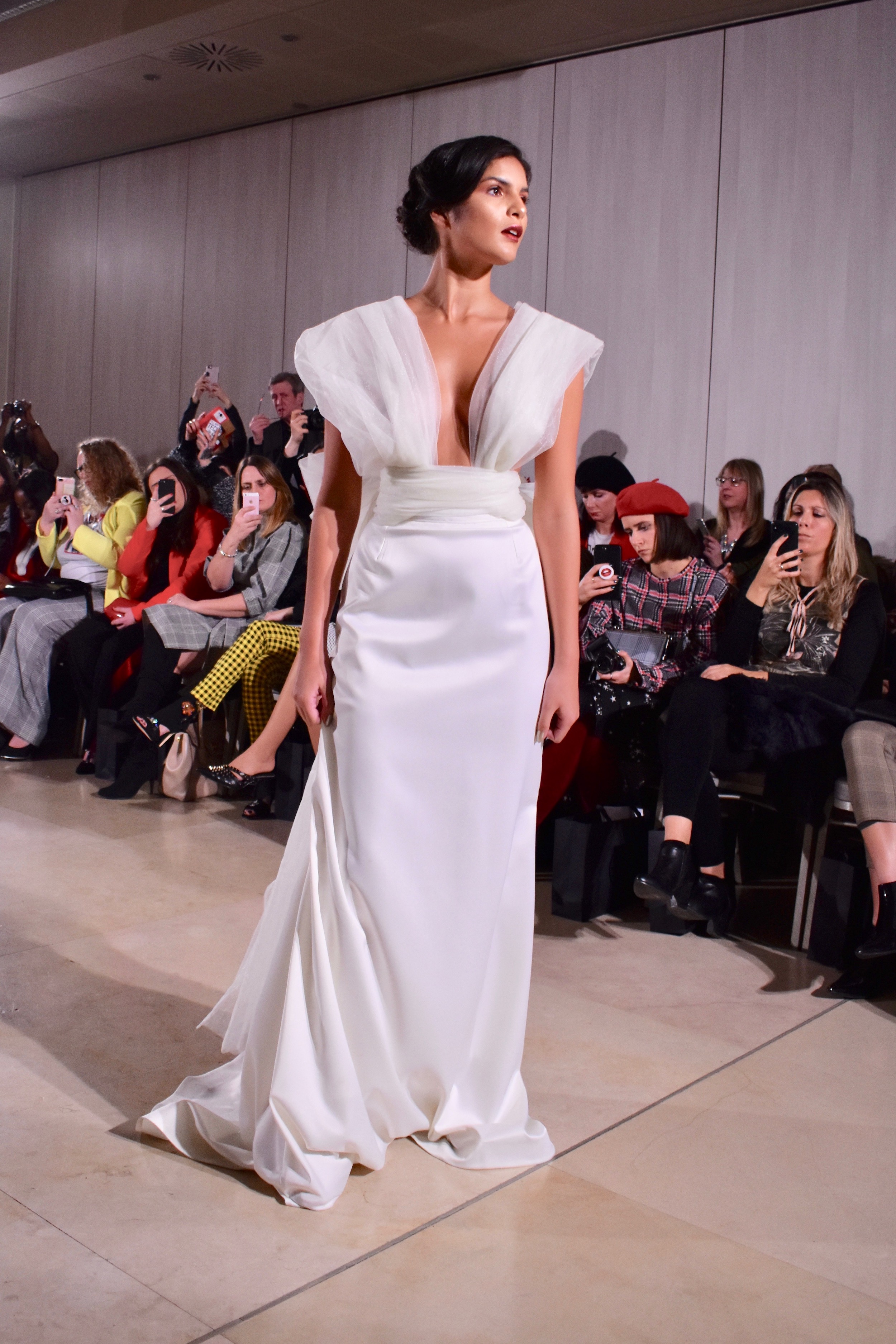 A wedding dress in white satin, with tulle straps covering the model’s chest, tied in a bow at the back. It wasn’t the first wedding dress we have seen from the young designer, her show in London featured one as a finale look, she tells me. “In every collection, I tell a story. This collection was based on my grandmother’s life story, and the years she lived in, so inevitably there would be some bridal there. What kept the Jewish people going through these tough times was actually their belief. So there is also this sense of purity and spirituality throughout the collection whilst in my London collection it was more because Vera Brittain was never married due to losing her fiancé in the war.”

Religion was a recognisable theme through the closing stages of Nonna. A decidedly papal oversized dress with gold trim on the back that she informed me was in fact inspired by a Jewish Kapota coat.

What appeared to be simple, but still couture floor length navy dress indicated the end of this year’s collection. A basic gown this was not. As nuance is a forte of Elkayam, it should have come as little surprise that, as the model walked passed audience members leaned out of their seats to see what was on the back of the dress, some gasping in shock. As she turned at the end of the runway I was able to see for myself.

The straps on the back of the dress were in the shape of the Star of David. Elkayam’s Israeli heritage is something she has never shied away from. “It is really important to me. In this collection especially, because I wouldn’t be alive right now if my grandmother had not ran away to Israel. In this collection, it was very important to show all these symbolic things.”

I asked about the process that lead to this particular piece closing the show: “It was her last destination, the place where she was last, I thought that has to be the finale dress.”

Finally, Elkayam walked out from backstage, posed with an air of professionalism as the imposing wall of black lenses snapped pictures of the record setting designer. 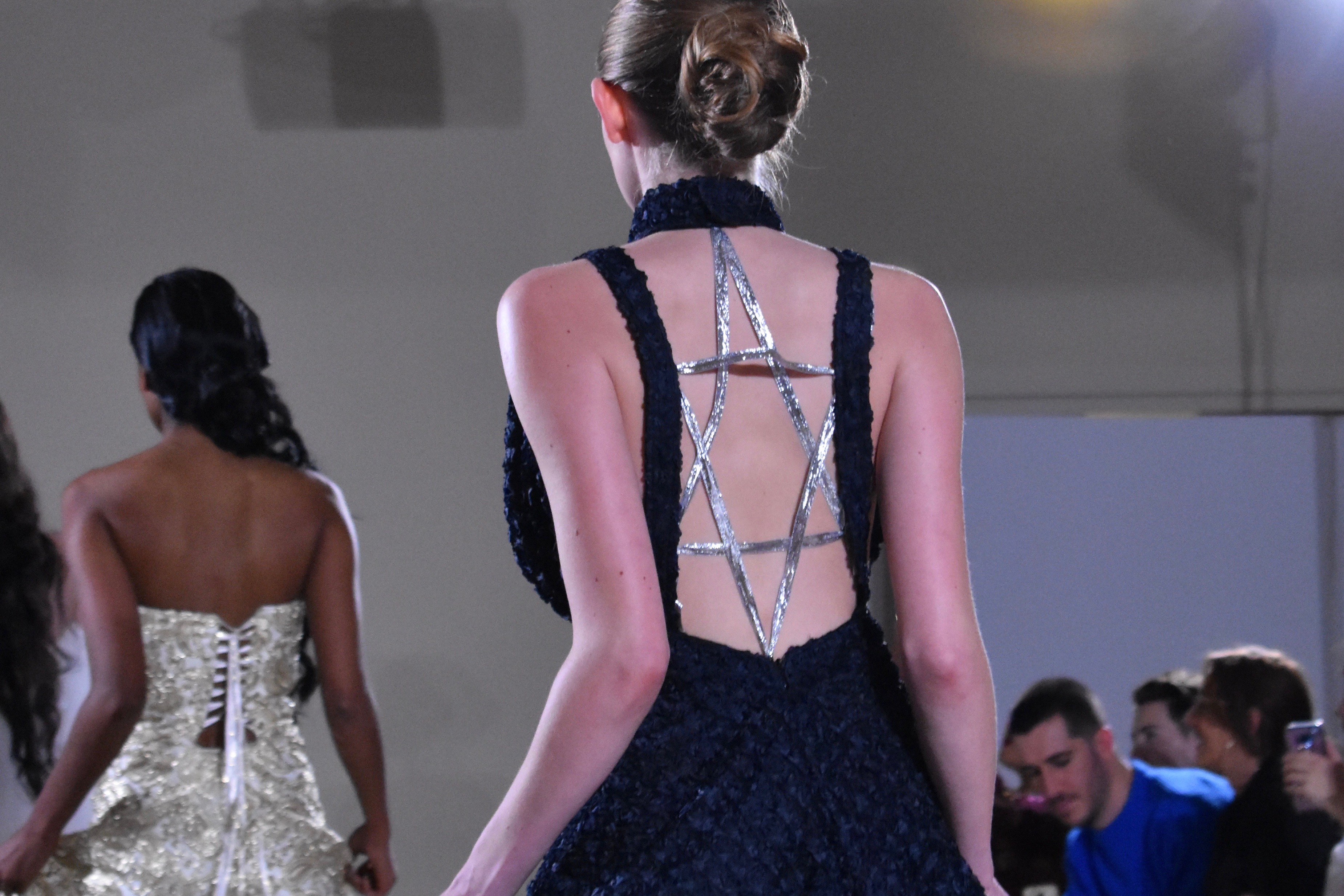 Star of David on the back of the final look

A couple of days after the show I met with Elkayam at Saint Martins, just moments after she had done an interview live on Israeli television. I was eager to find out more about what has happened in the year since I last spoke to her and to discover more about the creative process.

We sat opposite each other in the large open foyer at Granary Square, she was dressed modestly in all black; neither of us took our coats off even though we were indoors. London was blanketed under two inches of snow, the country was in the grip of the so-called ‘Beast from the East’, outside the temperature had not been above freezing for 36 hours. 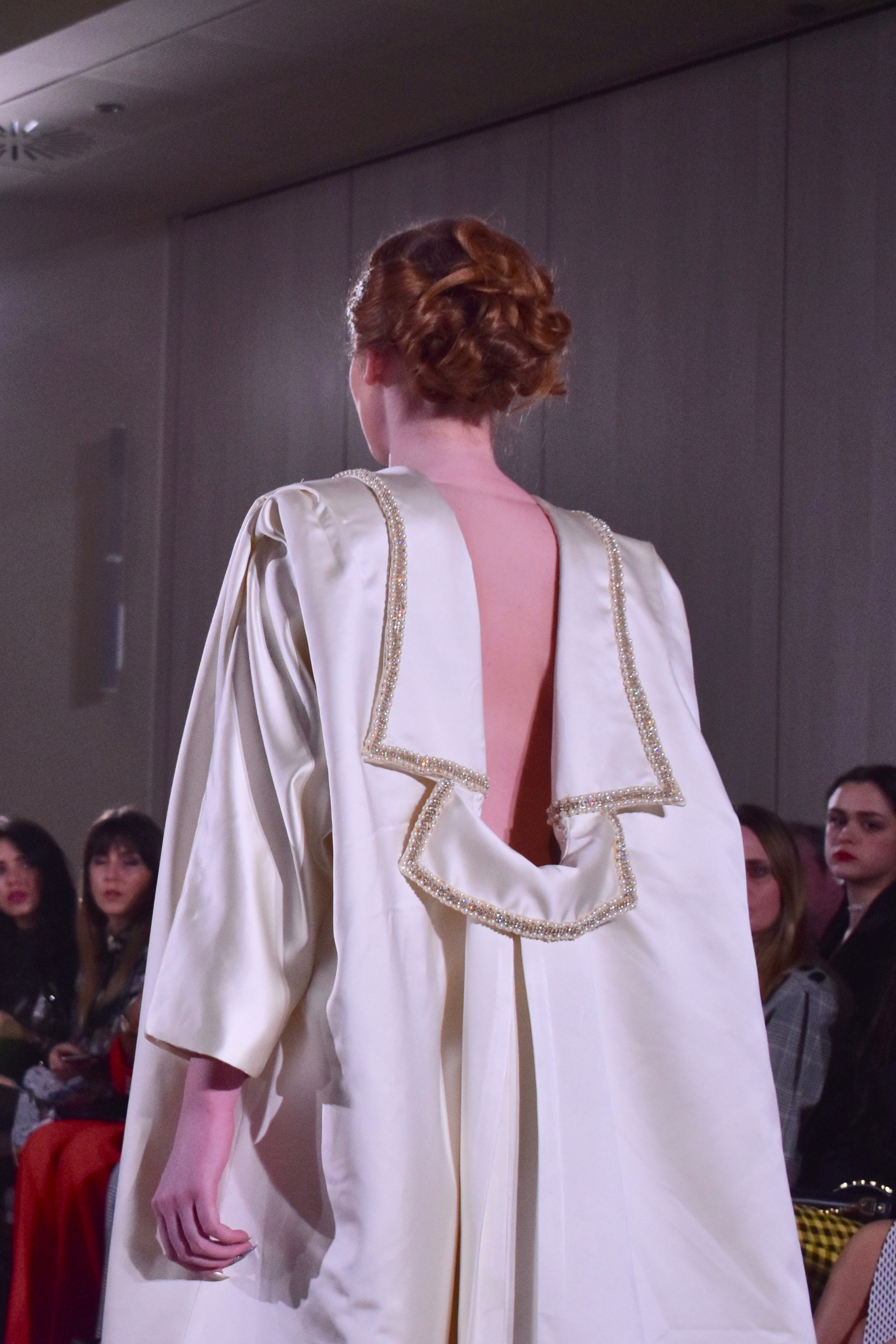 Look inspired by a Kapota

During our last meeting she expressed a desire to show at Milan, I asked how it felt to have showcased in the city and to have been on the official schedule. A smile appeared on her face as she said, “It was crazy, it still hasn’t sunk in,” her sense of pride is undeniable.

“I literally cried when the guy emailed and said I’d been put on the schedule. I couldn’t believe that my first independent show got put on the official schedule, I looked and then saw my name next to the huge designers; Prada, Gucci and Moschino.”

In the days after I returned, stories broke about the lack of cultural diversity in the modelling industry, only 24.7% of the models featured during Milan Fashion Week were non-white. I asked Elkayam about diversity and why she chose models with a range of backgrounds. “It is really important, also from a point of view of my brand, I want to show that it is suitable for everyone. There was a bald girl, black, Asian, mixed race, white, Polish, Latvian, South African; literally, they flew from everywhere for this show. It is really important; I do that every show and I will continue to do that. I make sure of it. Other designers only have white girls that all look the same with no variety what so ever.”

Where next I pondered: “I really want to go to Cannes film festival.” Certainly lacking no aspiration she continues, “London is my home town, I was thinking of doing shows here and in Milan. Maybe every so often I will have a show in a different place.”

It would seem cliché to label Chanel Joan Elkayam as a rising star in the world of fashion, but after becoming the youngest designer to show the at the four largest fashion weeks, I think one cliché can be forgiven and we can all watch this young talent flourish.

All images by James Underdown.