Infiniti team up with Paratroopers for Touring Car venture 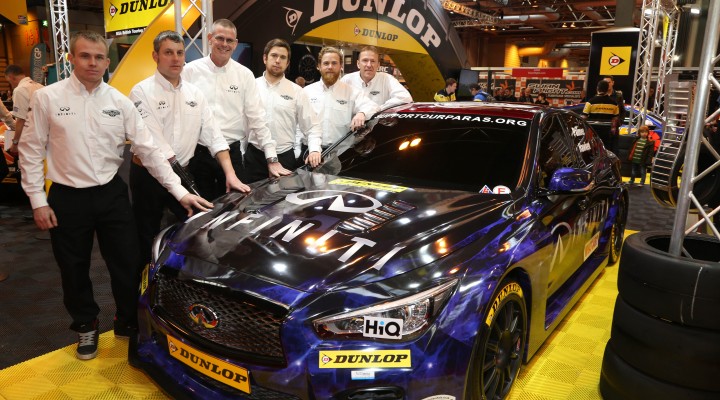 By Dan Deakins and Rob Russell

Luxury car brand Infiniti have teamed up with injured Paratroopers to create the ‘Support Our Paras Racing’ team which will compete in this season’s British Touring Car Championship.

With backing of long-term motorsport partners and four-times Formula One Constructors Champions Red Bull Racing, the company are aiming to raise awareness, and more importantly funding, for the newly-formed official charity for The Parachute Regiment.

Speaking at the ‘Infiniti Power Display’ at the Westfield Shopping Centre in Shepherds Bush, Darren Fuller, an injured Para and crew member, along with one of the team’s new drivers Richard Hawken, outlined their hopes and aspirations for the season, as well as the importance of the initiative.

Fuller said: “Many ex-servicemen leave the army, having been medically discharged, and find they can’t do much, whether that be practical stuff around the house or going out looking for a new job.

“It can be very difficult and some guys slip into depression, not knowing what we are going to do next in our careers. This really and truly has given so many of us a new lease of life.”

With all of the funds raised going to the new charity, Fuller was keen to reiterate the significance of the project. “There is no doubt about it, some life-changing equipment for an injured serviceman is so important, more so than any podium, but we are so excited about competing in the BTCC.

‘It’s a fiercely competitive series, but we are hoping we can be a surprise package’
driver Richard Hawken

“When soldiers get home, they find it very difficult to find anything that compensates for the experience of an adrenalin high that comes with fighting on the front line. By competing in this car, we can help them get it back and if we can win in the process that’s even better!”

This is the first time an F1 team has involved itself with an initiative like this, and Hawken feels very proud about it: “This is really important for us. We’re so pleased to be able to offer this as recovery and therapy to injured paras that are finding it difficult to fit back into civilian life.”

Hawken who has won three titles at motorsport club level, is also delighted to be making the step up to BTCC level. “We have a really dedicated, tenacious and disciplined bunch working behind the scenes, and I know I am really proud to be working with Paras”, said Hawken. “It’s a fiercely competitive series, but we are hoping we can be a surprise package”.

Infiniti general manager for Performance & Innovation, Jerry Hardcastle said: “We’ve set several key performance indicators (KPIs) for this project, and the number one is recruiting at least eight injured Paras this season to be part of the team.”

The team, which will field two works-backed Infiniti Q50 cars in this year’s Championship, unveiled their new car at January’s annual Autosport International Show, where members of the public were able to see the vehicles in their striking livery for the first time.

The car itself has a two-litre inline 4 engine with a top speed of 155mph, and goes from 0-60mph in an estimated 5.5 seconds.

The project combining Infiniti and Paratroopers is the first of its kind in the series, and the first in motorsport since 2011 when Red Bull sponsored a team comprising of members of the Royal Regiment of Fusiliers, including Captain Anthony Harris, to drive the extremely dangerous Dakar rally in Chile.

“The only thing I felt really strongly about is that I didn’t want the last exciting thing I did in my life to be that day I got blown up in Sangin,” said Capt Harris.

Fundraising for the Armed Forces in the United Kingdom has dropped down 30-40% in the last two years because of the drawdown in Afghanistan. But the problems don’t go away.

The Parachute Regiment lost 26 soldiers during the campaign in Afghanistan, with more than 130 others wounded. The charity also supports the families of the wounded and those who have lost their loved ones.

With a programme consisting of 10 race meetings, with 30 races across some of the best circuits the UK has to offer, the Dunlop MSA British Touring Car Championship is Britain’s singular most popular motor racing series, regularly attracting crowds of 40,000 people over a single race weekend.

You can find more information on ‘Support Our Paras Racing’ at www.parasracing.com.

Infiniti team up with Paratroopers for Touring Car venture