Voting For a Free Education

We’ve become used to empty promises. One which leaves a particularly sour taste in the mouth of young adults across Britain, is the pledge just before the last election that tuition fees would be abolished.

Young voters rallied to the Liberal Democrats in 2010, after their leader Nick Clegg said that his party would abolish the fees. Yet when his party formed a coalition government with the Conservatives, the pledge was dropped. Instead of a free education, university students starting their degree in 2012 received tripled tuitions fees from £3,000 per year to £9,000, the most radical shake-up of higher education funding for 50 years.

“We expect more from our politicians and are fed up of the cycle of broken promises. We don’t want to hear any more apologies.” – Toni Pearce, NUS

The betrayal left a bitter taste for millions of young people and the Liberal Democrats popularity has never recovered. NUS President Toni Pearce says: “Back in 2010, hundreds of politicians personally promised students that they would vote against any increase in tuition fees, they traded lies for power.”

Disgruntled students have protested against the tuition fee hike since its instigation and it appears to be playing a significant role in 2015’s General Election, at least for the Labour party and the parties lurking below the surface, hoping to nab a deal as part of another coalition government. Broken promises about tuition fees are often cited as a major reason why young people are uninterested in party politics and far less likely to vote than older people.

University education was free until Tony Blair’s Labour government. Students who began their courses in autumn 1998 paid £1,000 a year. This was later controversially tripled to £3,000 for students starting their courses in 2006, when Labour was re-elected, despite a pledge that the party “will not introduce top-up fees and has legislated against them”.

In the current system, with £9,000 tuition fees and rising living costs, students could pay £50,000 for a three-year degree, leaving university and starting a career with a massive debt over their heads. 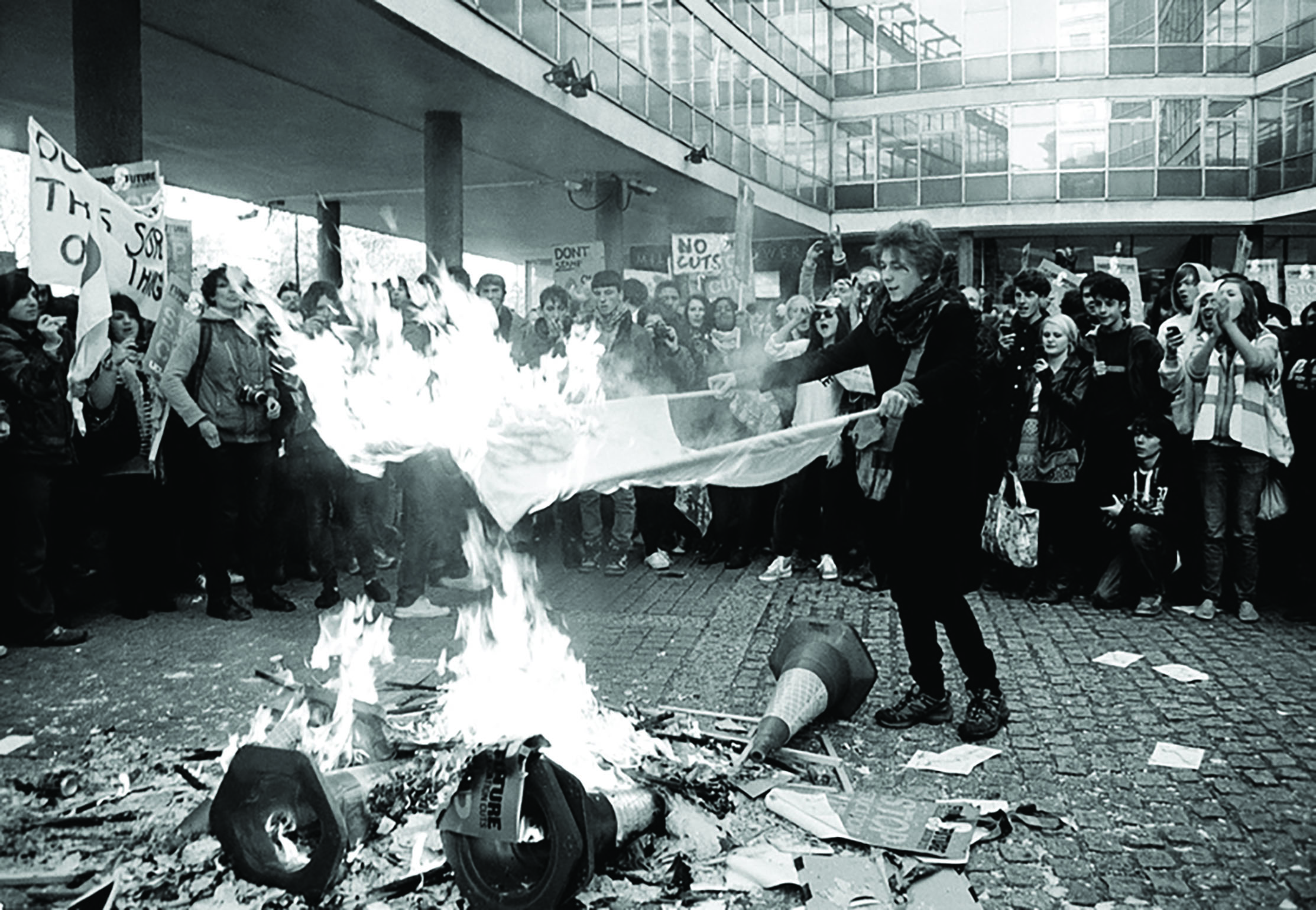 For politicians, the tuition fee debate however, is mainly an economic one. David Cameron, the Prime Minister, argues that university education subsidised by the government is unaffordable, without big tax rises or spending cuts in other areas, while others argue that a free education can actually aid the economy.

The global economy has forced countries, such as the UK to specialise in higher tech and higher value added products and services. The UK’s biggest export industries include pharmaceuticals, optical and surgical instruments, and nuclear technology. As this is our main export, there is a need for skilled graduates who can contribute to these high-tech industries.

Since the hike in tuition fees, there have been numerous protests and demonstrations across not just the UK, but the world, with students globally supporting each other in their mission to obtain a free education. Roman Hughes, an activist for free education said: “Free education is a basic human right and should be available to all. If anything, the rise in tuition fees has angered more and more young voters who are ready to fight against those who stand in the way of a free education.”

So what are the political parties promising for tuition fess this time round? The Conservatives completely ignore the issue, not even mentioning it in their manifesto, and Cameron has rejected the idea of cuts to tuition fees, stating that it could impede the development of the economy.

By contrast, the Labour party looks like a knight in shining red armour with its plan to cut tuition fees to £6,000. While it’s not a free education so many students seek, it is at least a cheaper one. In this case, it’s the Labour party who are expected to see an increase in the number of young voters.

As for the Liberal Democrats, the young voters cheering for them at the last election have turned on their heels, disgusted by the betrayal. It’s inevitable that there will be a steep decline in the number of Liberal Democrat MPs this election as they lose their appeal to young voters. Alex Seabrook, a student at the University of Cardiff says: “I voted for the Lib Dems at the last election, and so did many of my friends. We felt we had someone sticking up for us and providing younger voters and students a strong voice within parliament. Clegg has destroyed his relationship with the young voters who believed in him. There’s no way I’m wasting my vote on him again.”

The Liberal Democrats haven’t stated that they’ll be abolishing tuition fees, nor what they expect students to pay for a higher education. Instead Clegg focuses on the repayment of tuition fees, stating: “no undergraduate student in England has to pay a penny up front of their tuition fees.” It’s a slightly underwhelming statement as currently no student has to repay their tuition fees upfront, and frankly there would be an uproar if this became the case. Although Clegg doesn’t mention the actual cost of tuition fees but it is expected they’ll hold up the current fees system.

Some of the smaller parties have more radical proposals. UKIP’s stance on immigration holds little appeal for many young people and has led to its leader, Nigel Farage becoming the punchline, of jokes and memes spreading across the net. However, Farage’s stance on fees has drawn the attention do some younger voters.

UKIP proposes to scrap tuition fees for students taking ‘approved’ degrees in science, medicine, technology, engineering and maths. Art students out there, your degree isn’t approved, sorry. Also, the free tuition will be awarded on the condition that students work and pay tax in the UK for five years after graduation. Farage has not proposed a reduction for tuition fees for ‘unapproved’ course, meaning for most students, they’ll still be looking at a £9,000 tuition fee.

Hannah Fisher, a student at Westminster University said: “I don’t agree with everything UKIP says but it’s tempting to vote for them. They are going to sort out the immigration issues, which is something that needs addressing, but they also want to fix issues our current government won’t, such as the tuition fees. Wanting to give us a free education can’t make them that bad.”

However, UKIP’s stance on immigration will have consequences for education too, as EU students will no longer be treated in the same way as their UK counterparts and will have to pay the same fees as International students.

It is the Greens who speak most passionately about a free higher education. Their manifesto argues that “the funding of Higher Education has become a tool to direct and manipulate the direction taken by institutions whilst appearing to be neutral. The current system places an undue burden on individual students and fails to recognise the societal benefits of higher learning and research.”

Not only will the party scrap tuition fees, but it also promises to address the issue of maintenance loans and costs of living as a student. The Greens say they will abolish student loans and in the short term they’ll reintroduce student grants to meet living costs.

While these smaller parties won’t produce 2015’s Prime Minister, they could potentially be part of another coalition government which gives them greater power than they’ve previously held.

However, either the Tories or Labour will be the dominant party in any coalition and of these two, it is the latter which offers students the more appealing deal. A survey of student voting intentions carried out by The Complete University Guide puts Labour firmly in the lead with 36 per cent of the vote, followed by the Tories on 29.3 per cent with the Greens on 14.4 per cent, UKIP on 7.4 per cent and the Lib Dems bringing up the rear at 6.4 per cent.

As the Complete University Guide says: “the poll shows that while Labour doesn’t offer the free education students seek and feel is deserved, they are willing to accept a compromise. A reduced fee is a step in the right direction towards a free education.”