How to Start a Revolution

At the start of 2011 at the height of the Arab Spring, two young Libyans decided to start a revolution. Ayat Mneina, a student in Canada, and Omar Amer, a trainee-pilot living in Manchester, set up a Facebook page called The Libyan Youth Movement (Shabab Libya), to support and foment protest against the regime of Muammar Gaddafi that had ruled the country for 42 years. 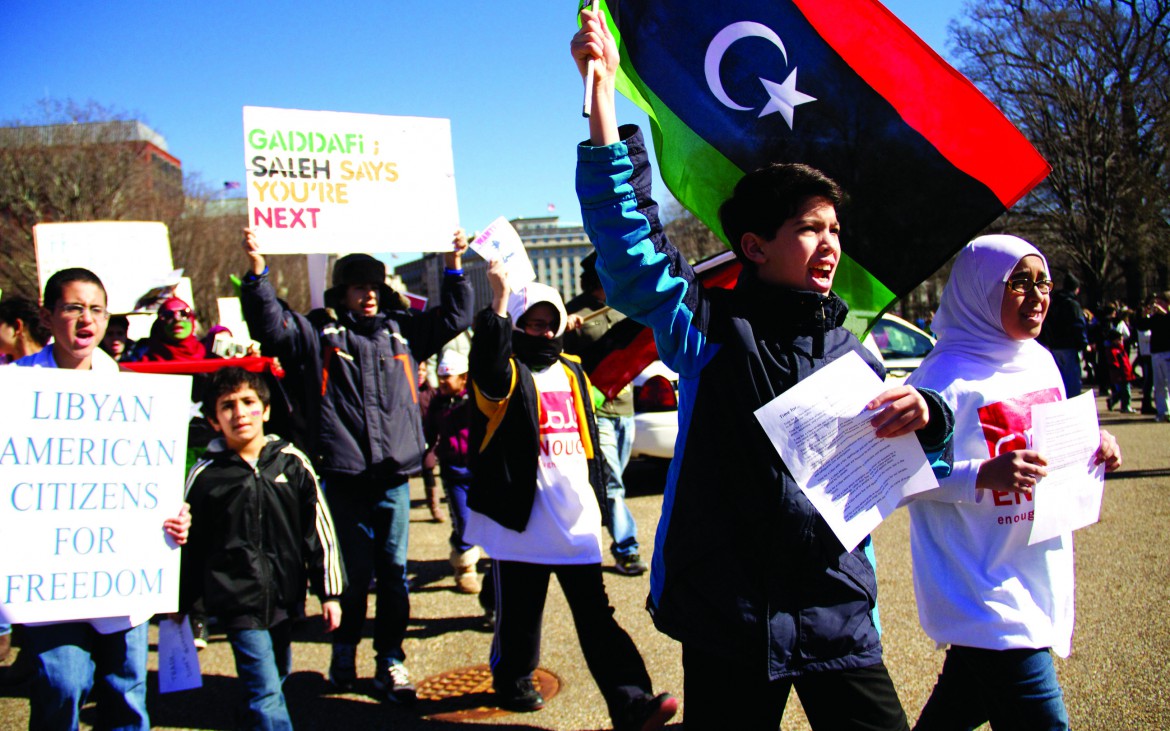 Within weeks, they found themselves at the heart of a violent revolution and civil war that continues to play out in their home country. In the early weeks of 2011, protests were growing inside Libya and the Libyan Youth Movement (LYM) rapidly became a channel for anti-Gaddafi sentiment on Facebook, Twitter and YouTube. On February 17, there were co-ordinated protests in several Libyan cities and Libyan military and security forces fired at protestors in broad daylight, whilst shutting down the internet so that the outside world knew as little as possible about what was going on.

LYM’s aim was to counter the Gaddafi regime’s propaganda efforts and use social media to tell the world what was really happening inside the country. Their information came from relatives, friends, or friends of friends inside the country. As the uprising progressed and spread to eastern parts of the country so did their sources

They soon became a trusted source for the BBC, Channel 4, CNN and other media outlets. Ayat and Omar did their best to get as much information out as quickly as possible: words, pictures and video. There wasn’t much time for them for to stop and swift through information, other than to try their best to verify sources.

People inside Libya took great risks to tell their stories to the world. Some would bring information to the Egyptian border, where it could be collected and uploaded. Ayat and Omar had to communicate in code with people inside the country. Ayat says that they had to balance the need to get information out with the risk to their sources: “Our kind of outlook was that information was going to empower our people to make the right decisions. We didn’t want to sit on anything, we just wanted to keep the information flowing and that was completely counter to what the regime wanted to do- was to keep everything under wraps and not reveal anything that was going on.”

‘The language of war’ was what Ayat and the other members of LYM found particularly difficult to adapt to. Translating basic information from Arabic to English wasn’t as difficult as translating the various weapons that were used, or describing the injuries or how many casualties they faced. They needed to be as precise as they possibly could before publishing a report. They’d always ask for a name or a general direction of where an event occurred. At times when they weren’t familiar with a particular neighbourhood or area, they’d often turn to one of their parents to seek clarity. She stresses how “it was the context on where these places were, what it meant, how significant these places were, because sometimes you would have info but it doesn’t necessarily mean anything until you put it in the right context.”

Since 2012, they’ve collaborated with the International Political Forum and launched what is known as the Libyan Youth Voices, which showcase young people’s ideas and opinions. Ayat talks about how the nature of the civil society is rapidly transforming, which makes it “rather empowering” for youngsters to manipulate these social media tools. The influence of young people being more politically mobilised and informed, can create significant change, as can be seen with this classic example of the Libyan Youth Movement.

“We took this uprising forward. We had people who took forward and sacrificed everything and it was young people that took the streets.”

LYM intends to create a physical presence for the their network but such a vision can only be fulfilled once Libya is more stabilised. The country continues to face a multitude of issues and Ayat feels that the UN and the international community lack accountability, scrutiny and most of all sincerity. She says: “I mean anyone can look at Libya in 2011 and say these people are armed to the teeth, security is there primary issue and let’s help them address this, and for that to have not taken place in the past four years is really disturbing and there’s a lot of really clear issues that should’ve been addressed but weren’t on part of the Libyan government and on part of the international community”.

As a result, the Libyan Youth Movement are looking at ways to improve the lives of Libyans. Ayat: says: “LYM is re-strategizing and thinking about where to take this further and we always thought that this was going to change Libya forever and it wasn’t just for us and may even look different in future generations we could maybe set something else up for them that was maybe more democratic and more what we envisioned for ourselves but clearly and obviously that’s not going to happen unless we put in the work that is required and that’s the stage we find ourselves today and we are set on taking another prominent role in this kind of transition.”

“The revolution must continue because something has to replace what was, that currently is in complete process.”

Ayat describes what it felt like revisiting her country soon after the uprising, and the realisations that came with it. The people were euphoric and thrilled because the regime was gone, but “It was kind of this calm before the second storm.” The access to power and wealth took its seed yet again, causing further instability and chaos. So much so, where young activists are currently being exiled terminated or even assassinated. Ayat believes that the fight for Libya still continues, as she said “I can’t call 2011 a revolution to be honest, but to call it an uprising because revolution implies that change takes place, this has just been an uprising to remove a regime but no real changes have been implemented, the lives of Libyans haven’t improved In the way that they had wished to seen it.”