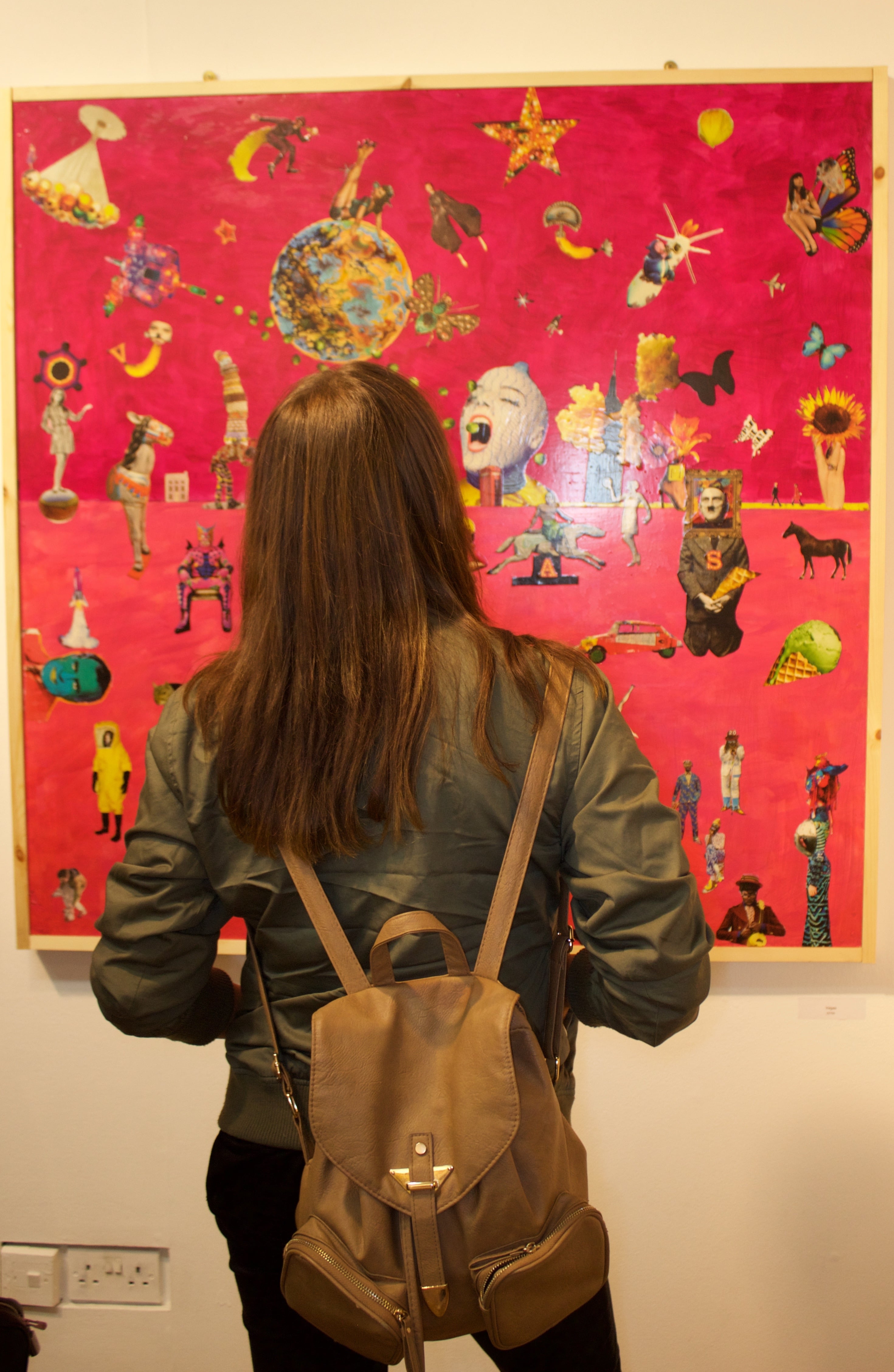 It isn’t every day you’re handed an invitation to an art exhibition while wandering down the street, unless you’re strolling down Brick Lane, of course.

When I say strolling, I mean dodging, swaying, ducking and swerving the endless amount of shoppers, coppers, bloggers and vloggers that’s expected on a Sunday.

What better place to hand out invites to an art exhibition?

The show, a private showing of Adrian Boswell’s newest collection, was held at the Brick Lane Gallery, and consisted of two floors worth of art. The top floor, the immediate facade of paints and collages you see, showcased Adrian’s new collection, whereas downstairs featured an array of his past work.

There are clear inspirations from the dark and twisted paintings created by Hieronymous Bosch, a 14th Century artist renowned for his art with resemblance to a hellish nightmare, and with influence from Salvador Dali, a surrealist painter who is famous for quoting: “I don’t do drugs, I am drugs.” Adrian Boswell gives you a glimpse into his mind – a haven of psychedelia and fantasy-based collages.

Boswell was a pleasant eccentric, which anyone who has seen his art prior to meeting him would probably expect. He welcomed me with a glass of prosecco, and was more than happy to answer some questions: “But make sure you grab me before I’m pissed,” he added. He certainly had a strong connection with the audience of his gallery. This was his element, and we were in it.

At 7pm on the night of the exhibition, the gallery was filled with a mixture of people, young and old, who had come down to show support and enjoy the magic of the art.

As I mooched around and tried my hardest to fit in with the arty types, I managed to understand what it was all about. Boswell has no boundaries. An obvious recurring theme flows throughout. This is his dream, his fantasy world, his acid trip, and we are just outsiders seeking a glimpse into this psychedelic surrealism.

“I was hugely inspired by the humour of Terry Gilliam growing up, which adds to the Pop Artiness,” Adrian tells me. It was clear to see references from Andy Warhol – the Pop-Art vibe screamed through the art’s intense, vibrant colours. Metallic pinks clashed with flashy lime greens. A refreshing take on classic meets contemporary art, with a comical and edgy side to it. A side you shouldn’t take too seriously.

Adding to the impermanence of the art, Adrian included popular culture. It was comical to see a body-less David Bowie morphed into a chicken, (which was surprisingly not one of Bowie’s costumes). Throughout all of the comedic values within the art, an underlying political message comes to a head through the use of Adolf Hitler, who seemed to have made his way into a couple of the pieces. As I said previously, Adrian Boswell has no boundaries; Hitler certainly played a part in popular culture, but for an unpopular reason – so what made him become a part of Boswell’s exhibition?

Adrian has a bittersweet empathy for Hitler. “It’s a sad part of Hitler’s life, and also a sad part for everyone. If Hitler had been accepted as an artist, which was his original intention, before he went on this crusade of hatred and focusing his energy on destruction. He knew he was going to be good at something, and sadly in the end it became mass murder.”

Surrealism takes the lead in works like the Summer of ’39, where Hitler is holding a paintbrush. Adrian pays homage through the succession of his own art, to a man who was never known for his art. A controversial statement, with an interesting interpretation on one of the most sadistic men of the last 100 years. 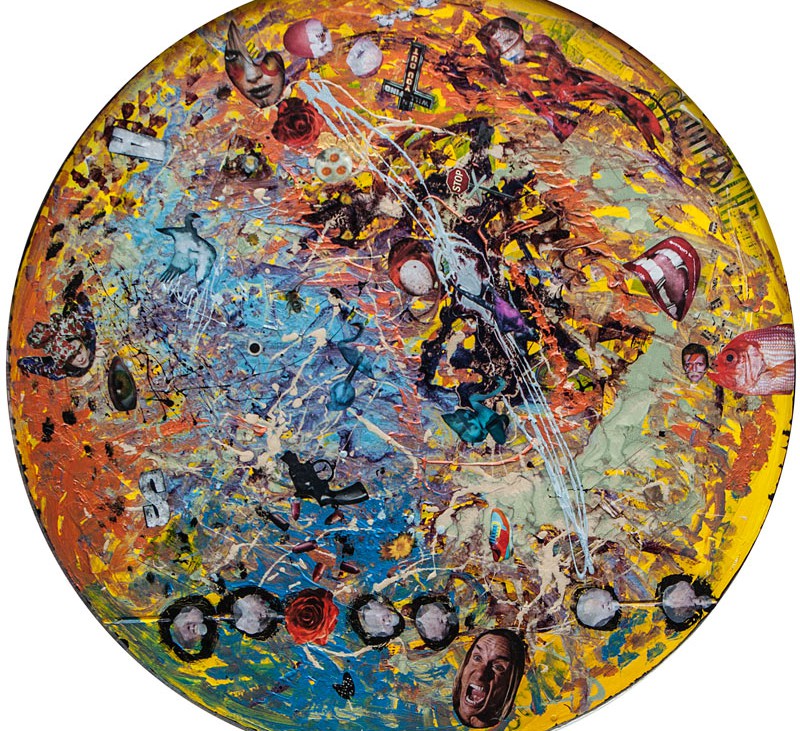 Singing fish, a £1,600 circular-framed painting was the standout piece for me. Maybe it was my love for over emphasized colours, or maybe just because I enjoy splatter painting my jeans, something about this piece had captured my imagination. An Italian guy – who told me that he just doesn’t quite understand this art, he was into classic art – told me that this painting was ridiculous. I thought liking the splatter paintings was enough for me but he decided to carry on undermining my opinion and rambled on, unnecessarily. It had only taken eight minutes for someone to reel off a number of pretentious statements and start comparing the works to that of Da Vinci. It’s right when they say art is subjective. The Italian guy did not think so.

With a collection of many twists, turns, flips and spins, Adrian shows his versatility at creating art built around controversy and fantasy. Being induced into a psychedelic dream rewards you, whether you like it or not. This is Art. This is imagination. This is Adrian’s take on the world we live in.

If London took acid, I’m pretty sure it would look like Adrian Boswell’s art.

Check out www.adrianboswell.com to find out more.