So, why are we so bad at football? 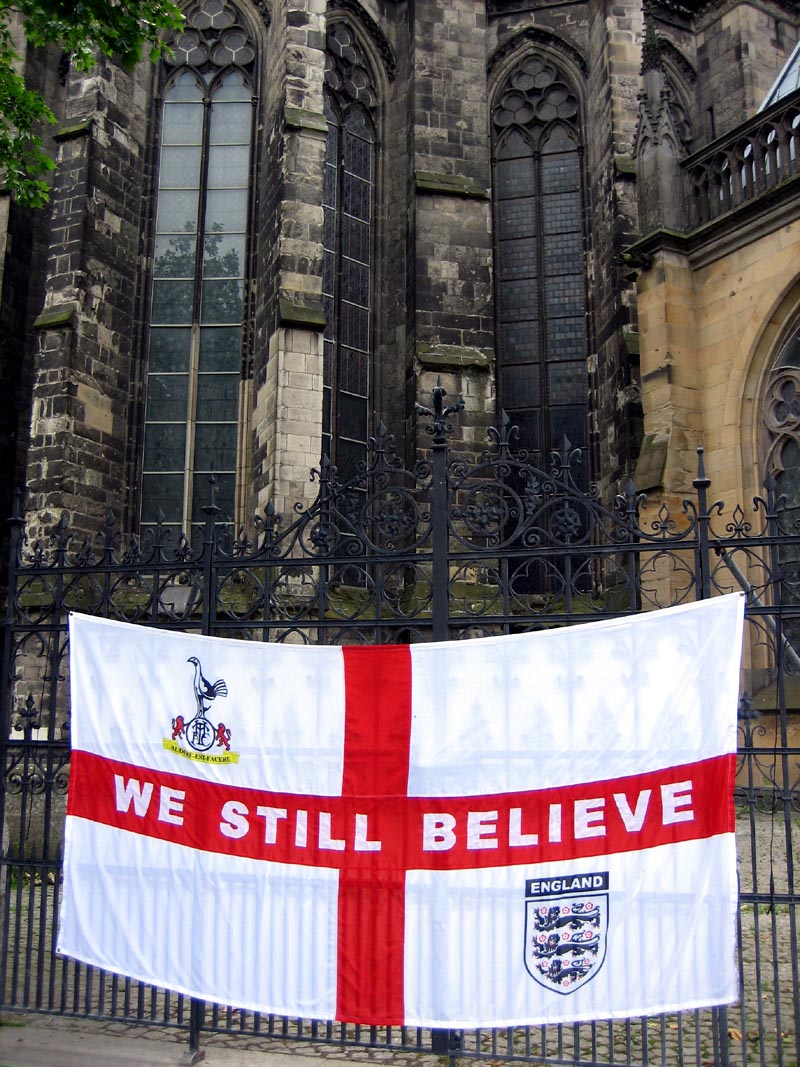 Following a humiliating defeat to Australia at Twickenham in the Rugby World Cup, England become the first and only host nation in history that has failed to progress from the group stages at a Rugby World Cup.

It appears we are, to quote Jose Mourinho’s term once used to describe Arsene Wenger, ‘specialists in failure”. We have exported the most popular sports in history across the world, and yet remain perennial underachievers in them all.

Not just that, we appear to be getting worse. Why are we moving backwards?

The resilient bluster that electrified the offices and pubs of this country during summers past has gradually faded, the national psyche now replaced by one of exasperated resignation.

They say you can’t reach the top without feeling the floor. Perhaps its time we take a step back to ask ourselves not how we lose, but why?

In terms of figures, whilst English football boasts an impressive number of clubs both professional and amateur for aspiring youngsters to ply their trade, we see a drastic decrease in the number of English players as we climb into the Premier League.

During its inaugural season, 69% of players on the starting line ups of Premier League clubs were English. This is down to 33% this season, the lowest amount of home grown players of all Europe’s leading leagues.

A recent BBC survey asking whether foreign players damage the league paints a complex issue, with 42% of respondents answering yes and 45% no, with 12% saying maybe.

There is also a shocking lack of qualified English coaches with only 3,000 across the country as opposed to figures of up to 20,000 in Germany, Italy and Spain.

FA CEO Martin Glenn has recognised this, stating that to succeed “Quite simply England needs more football pitches and we need more and better coaches”.

“Whilst not always the managers fault, the domestic environment now necessitates a lack of investment and promotes a mind-set of short term thinking in an arena that increasingly measures managerial careers in months and not years.”

Clearly the league is reliant on big name foreign stars to garner interest. However, as Premier League clubs spend increasingly large transfer fees on foreign players, as well as bowing to their exorbitant wage demands, youth development is continually stifled, and foreign clubs finances are strengthened.

Whilst not always the managers fault, the domestic environment now necessitates a lack of investment and promotes a mind-set of short term thinking in an arena that increasingly measures managerial careers in months and not years.

So what can be done to remedy this? Thankfully, the seeds have already been planted with the opening of St George’s Park National Football Centre on October 9th, 2012, finally providing the national team with a stand-alone centre for football, like most of Europe.

The £105m complex will allow England to implement a comprehensive, coherent footballing philosophy, with a renewed emphasis on the technicality common to the popular European sport of Futsal.

Futsal is a small-scale variation of football played on indoor pitches with five players a side. These factors necessitate a more technical style of play. Footballers such as Pele, Lionel Messi and Cristiano Ronaldo credit Futsal with turning them into the players they are today.

Many like me, who attended a typical English primary school, will remember their playing field. When you’re 10 years old and under 5 feet tall they can seem pretty daunting.

Of course, this being England, they do also have a tendency to become windswept, desolate plains of churned mud during a large portion of the year. It’s little wonder England clung so stubbornly onto the long ball game for so long when our kids were raised in these conditions. Luckily my experience was a good 15 years ago now and progress is being made.

The FA states: “In some quarters it is still believed that The Football Association coach education pathway champions a direct method of play, based on a long-ball approach. This is not the case”.

They add in their 2010 Technical Guide ‘The Future Game” that with the ball players should “refrain from kicking the ball hopefully from one end of the pitch to the other”, and instead build play.

This renewed emphasis on technicality is encouraging, and from a more practical standpoint, the FA has added Futsal to its official guide for youth development, which is important. Of course, this will all be for nothing if the status quo continues elsewhere.

An overabundance of committee members at the FA means that at meetings where important decisions regarding the national game are made, votes are held in rooms consisting of up to 70 committee members, some of who have no experience of professional football.

There is an absence of ex-players and managers in senior political positions in English football. The FA is an old boys club of sorts, handing out roles to ex-executives, whilst talented ex-players settle for jobs in the media and punditry.

Recent FA restructures leave cause for optimism, with the admittance that the organisation is relatively large compared to similar national federations, with significant downsizing planned.

However, we must remember that a business will ultimately act chiefly by principles of self-preservation and self-interest, and meaningful change may need to sometimes come from the outside.

Filling the FA board with people who possess extensive first hand knowledge of the professional game would allow them to make more informed decisions for the betterment of the national team.

My proposal would require FIFA to change its rules, and as they have more pressing matters at hand as of late, I’m not holding my breath on this one.

A compromise can be had in an overhaul of the FA’s internal structure whereupon any votes with regards to the national team are held by a board with professional footballing experience.

Financial Fair Play is a step forward but the increased investment in youth development that it was hoped to bring remains geared towards smaller clubs as bigger clubs use increased sponsorship deals and player loan schemes to continue their unfettered spending habits.

After a massive three-year domestic deal with Sky/BT Sport for TV rights, rumoured to rise to over £8 billion once international rights are included, the EPL must increase its current 15% share of revenue for development of football outside of the League.

Until income disparity is addressed this reliance on big money foreign talent will continue. For now, it may be said that realistically the Premier League is the only place where players can garner enough experience to play at international level, but home country managers have been doing this for many years.

The Welsh national side is currently experiencing a resurgence of sorts having qualified for Euro 2016 after having not reached the finals of any major football tournament in 57 years, despite a line-up consisting of numerous Championship players, as well as a non first team goalkeeper.

This is a testament to the idea that if Roy Hodgson cannot find the English talent he needs in the Premier League, he should not be shy about looking towards the Championship.

After lacklustre performances during World Cup ’98 and Euro ‘00, the German FA embarked on a huge scheme to promote young domestic talent, investing in regional centres to provide individual and technical coaching for 13 to 17 year olds across the country.

They also made it compulsory for the top 18 teams in the country to build youth academies, before extending this to every team in Germanys top two divisions. These academies are also given funding based on their performance, which can be particularly beneficial to smaller clubs.

“We need to wake up to the fact that reforms such as Germanys do not have to be constricting, pay back dividends on their investment, and have been proven to be mutually beneficial at both club and country level.”

Germany’s approach has proven to pay off both on a domestic level, as evidenced by the meeting of Borussia Dortmund and Bayern Munich in the 2013 Champions League final, as well as internationally, with their subsequent World Cup success.

Many of the stars of all these teams are products of the academies. We need to wake up to the fact that reforms such as Germanys do not have to be constricting, pay back dividends on their investment, and have been proven to be mutually beneficial at both club and country level.

Given all this, the FA’s quota reforms seem both woefully misguided and unviable in comparison. The Elite Player Performance Plan (EPPP) was introduced in 2011 and has effectively replicated many aspects of the German approach, which is a promising development, although we need to go further and faster.

Whilst the FA is admirably investing in separate schemes such as bursaries for coach training, it needs to do more within the league structure.

Private ownership in the EPL gives us the means to attract the cream of foreign talent, but has also led to a distancing of the principle of intertwining fortunes between the league and the national team, unlike in other countries. For a country as virulently patriotic as ours, I find this bizarre.

The 50% plus one rule in the Bundesliga requires clubs to hold a majority of their own voting rights, giving effective control. Whilst it is unrealistic to expect similar ownership reform at this stage, stipulating youth development as an integral part of every clubs culture at all levels can and must be introduced.

As the former DFB president Gerhard Mayer-Vorfelder once said “Youth development must be the focal point of our work”.

We cannot forget to mention the influence of the media, for the English press can be a rare beast when it comes to their national team. We see undue pressure heaped upon our youngsters when they show merely a flicker of talent.

The pressure of performing in a division as fast, aggressive and competitive as the Premier League can take its toll on any player, let alone a relative newcomer to the game.

It is small wonder that many young talents simply burn out or are unable to replicate their club form for country.

One need only look at young talents such as Tom Cleverly, quickly labelled the next Paul Scholes, then savaged for his perceived drop in form and unceremoniously dropped from England.

Harry Kane has also struggled to find his form for England, again after the media were quick to crown him the next Alan Shearer based on one outstanding season.

Other countries with strong youth development programmes also emphasise football as a sport to be enjoyed before introducing the competitive nature at a later stage.

We would be wise to temper the introduction of a winning mentality with a modicum of emotional stability as we nurture our footballers, introducing more age-appropriate training, such as lower player numbers for younger children.

This approach has been proven successful not only in large nations like Germany, but also smaller nations such as the Netherlands, and more recently Belgium.

These countries are punching well above their weight relative to size because they have well funded, tried and tested youth development programmes that promote these values.

I believe we have reason to be upbeat for English footballs future. In 2013, FA Chairman Greg Dyke set a target for England of reaching the semi-finals of Euro 2020, and winning the World Cup in 2022.

Laughably idealistic? Not if we push through comprehensive, radical reform. Not if we do it at every level from the boardroom to the playground.

We can challenge the consensus that England is unable of being a serious trophy challenger, but it will require bravery, creativity, and pragmatism. If there’s one thing we can learn from the past, it’s that we definitely have that in spades.