How the EDL tried to shut down Aylesbury 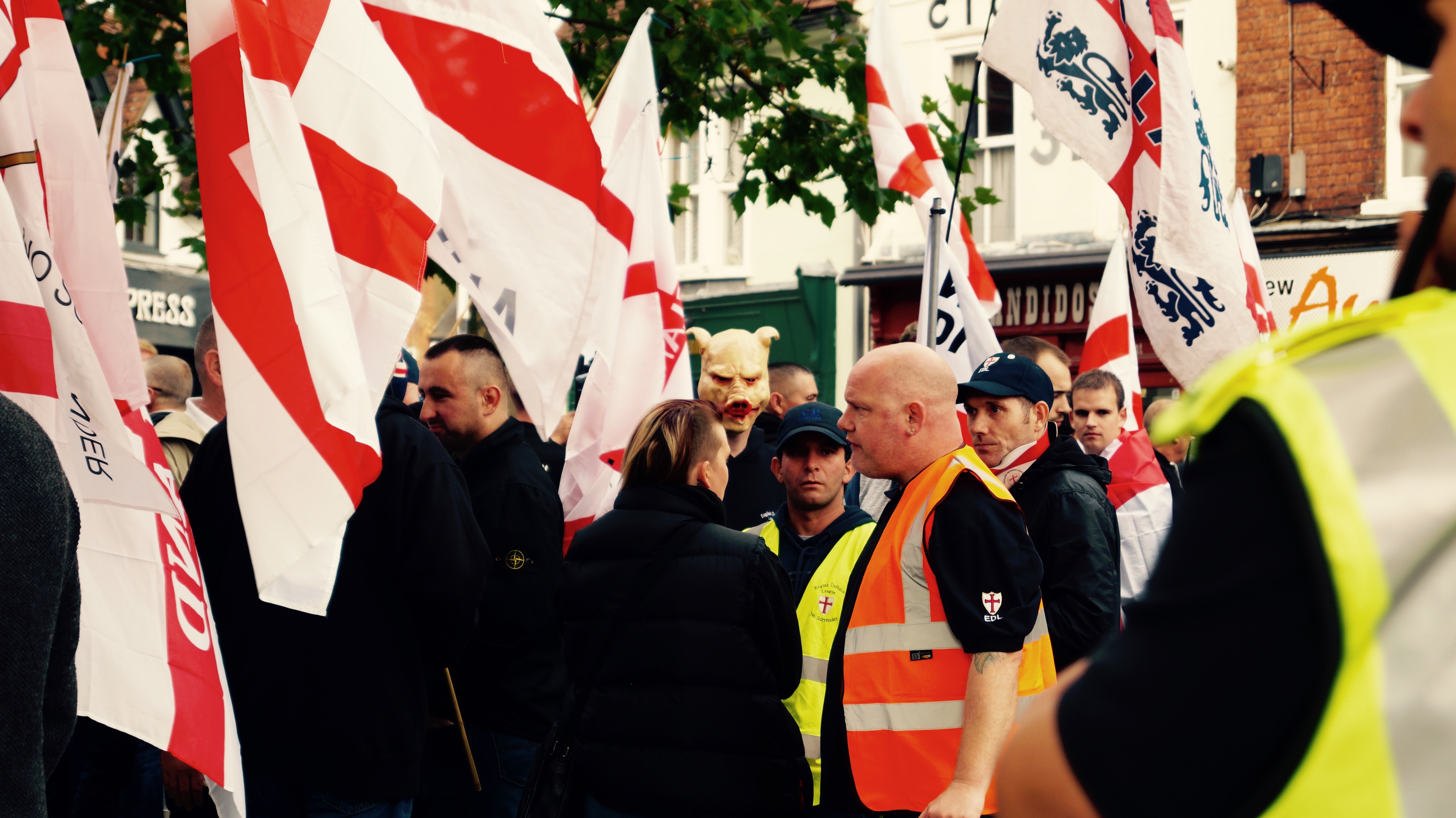 In early 2015, six men were found guilty of grooming, drugging and abusing two teenage girls in Aylesbury – a small, conservative market town hidden in the depths of Buckinghamshire.

Almost all media outlets made note of the fact that all six men were of Asian descent, and of course, that the girls were white.

The far-right shit themselves. Not only is this exactly the sort of fodder that fills their banners, megaphones, and Facebook feeds – it was fuel to a fire that was actually beginning to burn out. Albeit very slowly. 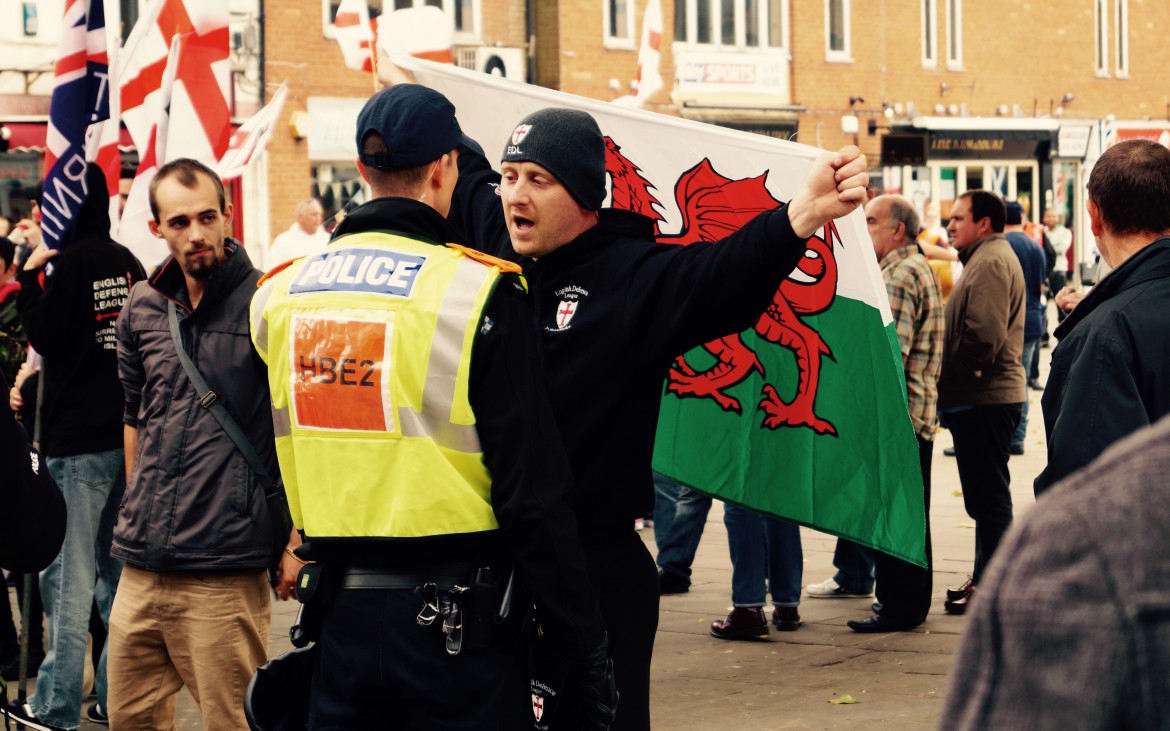 When the English Defence League formed in 2009, they represented something quite drastic and significant. They were an outlet for a growing number of young, angry – almost exclusively white – British men who felt their culture was being seriously threatened by an influx of radical Islam in the UK.

Their founder, Tommy Robinson, called it a day, citing that maybe the EDL were a bit racist after all, and thanks to a strong counter-presence at almost every demonstration and a shift from many to the even more embarrassing Britain First, their Saturdays turned from mass brawls with countless arrests in liberal towns such as Brighton and Oxford, to essentially a piss up and a stroll through UKIP heartlands such as Rotherham and Margate. 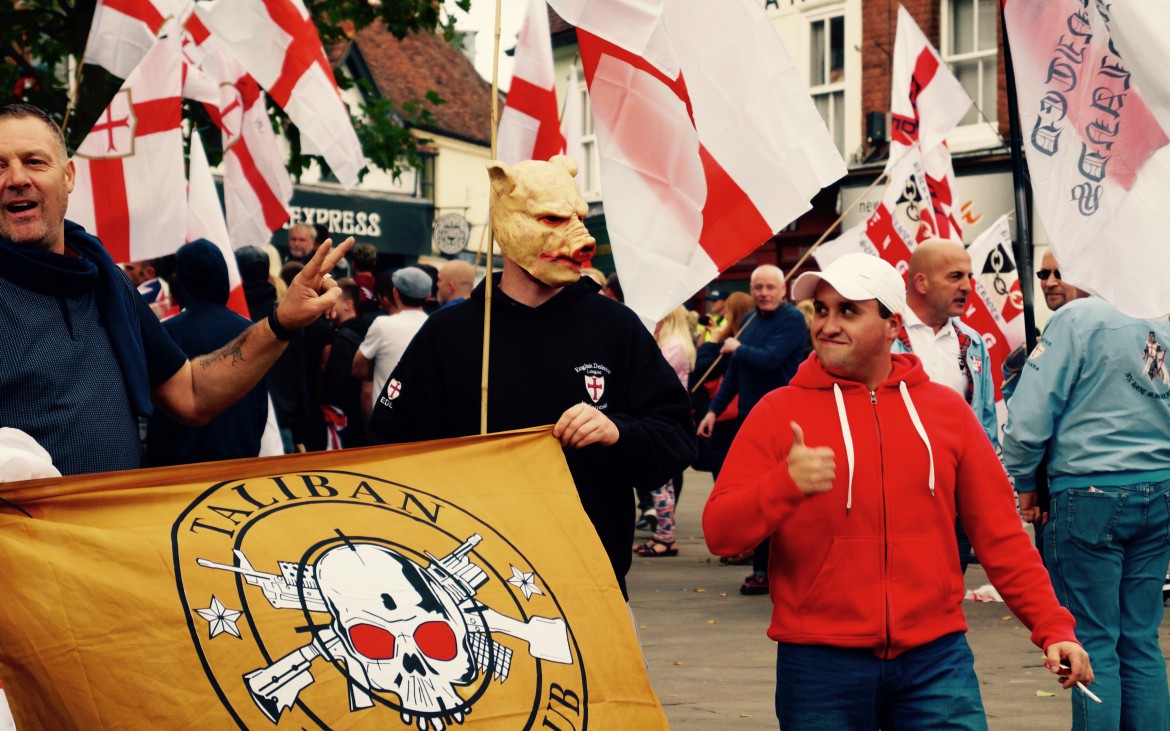 It was back in 2010 they first marched through Aylesbury; an event that struck genuine fear into almost everyone connected with the town.

Shops were bordered up, pubs were closed, and the council strongly advised locals to avoid the town centre.

The EDL came in force too, with just under a thousand coming in by the coach load – Carlsberg in hand, gram in pocket, and ready to fight anyone brave enough to offer a different opinion.

The heavy police presence managed to keep things from getting too out of hand that day, but 28 marchers still managed to get themselves arrested without any major counter-demonstration even confronting them.

They seemed to linger around the town all day chasing everyone around, at one point attacking a local mosque.

It was a day that was genuinely unnerving – you sensed people were angry and divided, and that things were close to reaching boiling point over the racial tension in the country. 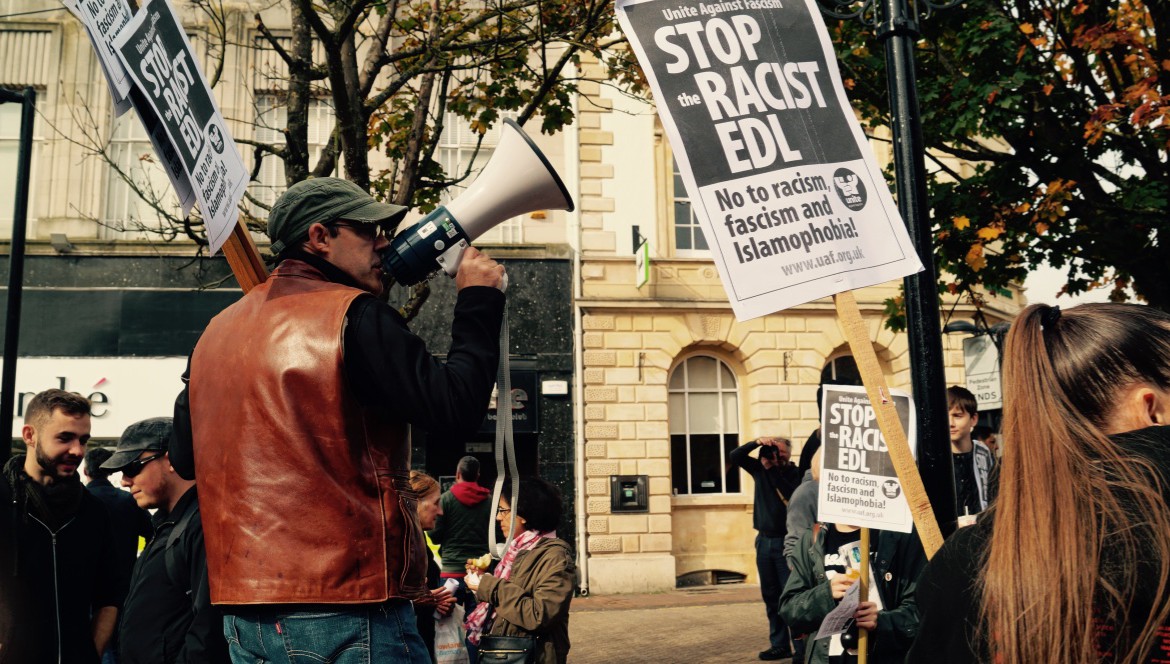 The counter-protest, that was non-existent in 2010, gathered early this time though.

Two of them. Separately.

One group that had organised a demo against the march, joined by regular people of the town throughout the morning, with banners and speeches making it clear the EDL were not welcome.

Another was made up of balaclava teens dressed like they had literally come out to murder the EDL, pacing vainly around away from everything. 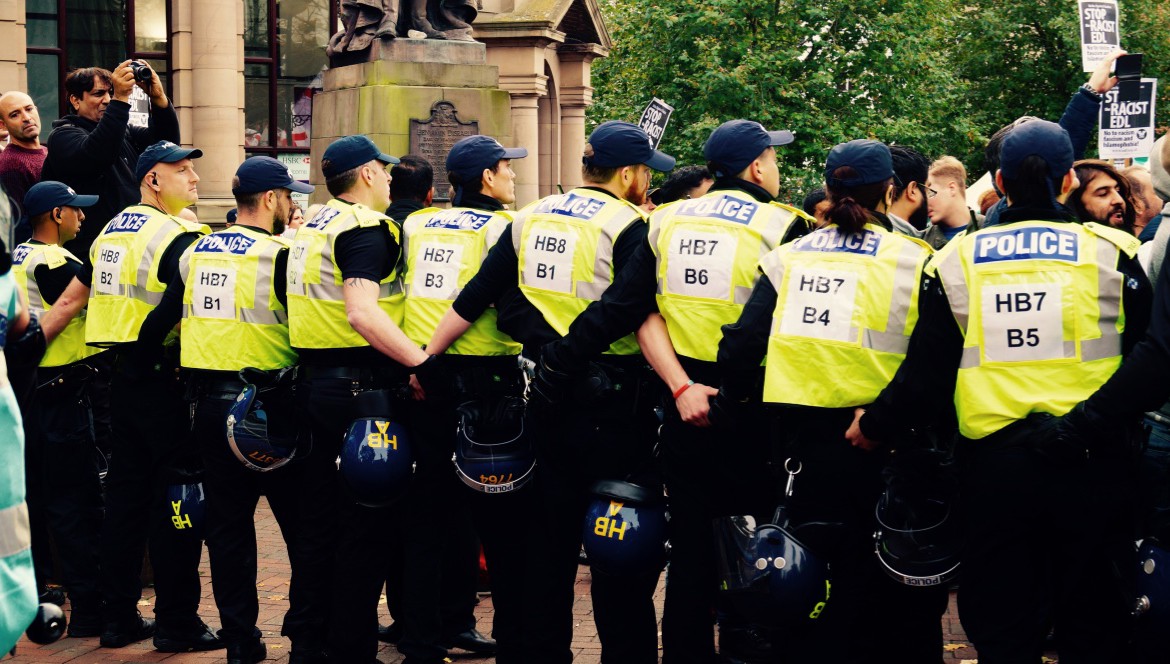 The EDL gathered outside a working men’s club a short walk from the town centre, as photographers from the local press and a few passers by gathered to greet them with their iPhone cameras at the ready.

As soon as the march caught sight of the counter-protest it seemed to peak. The chants went up a decibel, and everyone was briefly stirred trying to get through the wall of police officers. There was a brief coming together, but it was hard to see what was actually happening. The police managed to keep them apart, forming physical barriers around each separate group.

Once the trouble passed, the march seemed to go stale. The counter-protesters still set on murdering them had attempted to get around the other side of the square, but to no avail. The police were literally everywhere. 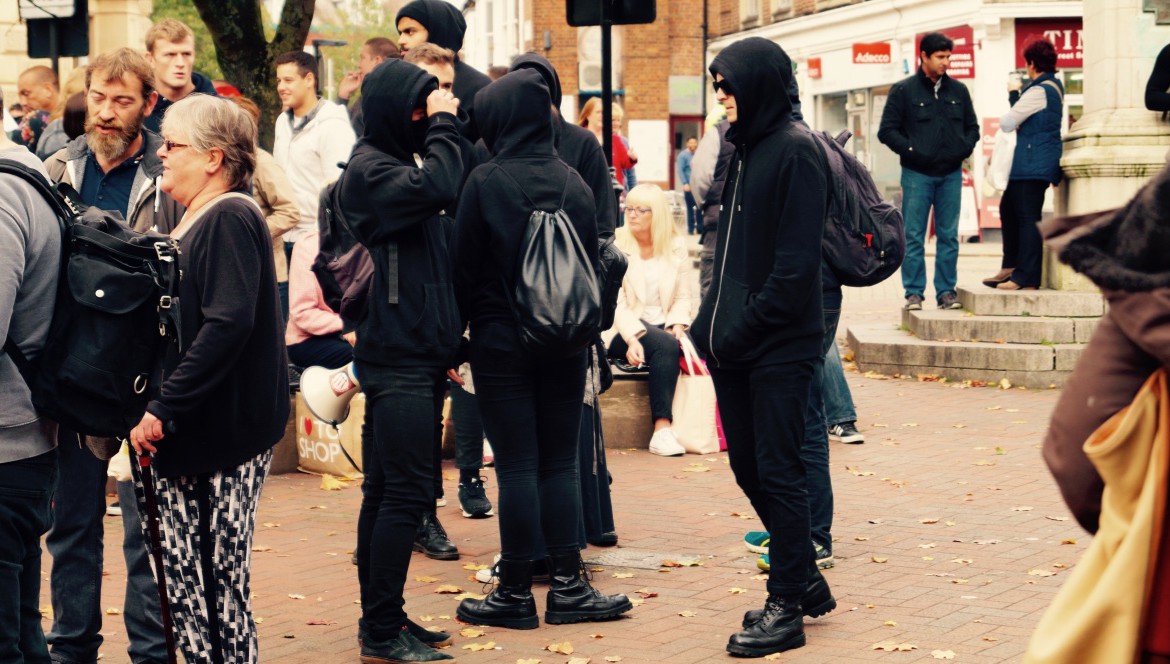 Up to this point it was everything you’d expect from an EDL march. Flags, chanting, a bit of a scrap and enough drinking and shouting to make it feel like a Saturday night out in … well … Aylesbury.

A group of Muslim men arrived at one point and tried to confront the march, with a few EDL members again throwing themselves at police in an attempt to get to them, but it was all something of nothing.

The whole day just felt like an anti-climax. Like even the EDL couldn’t be bothered to muster enough spirit for a proper fight. 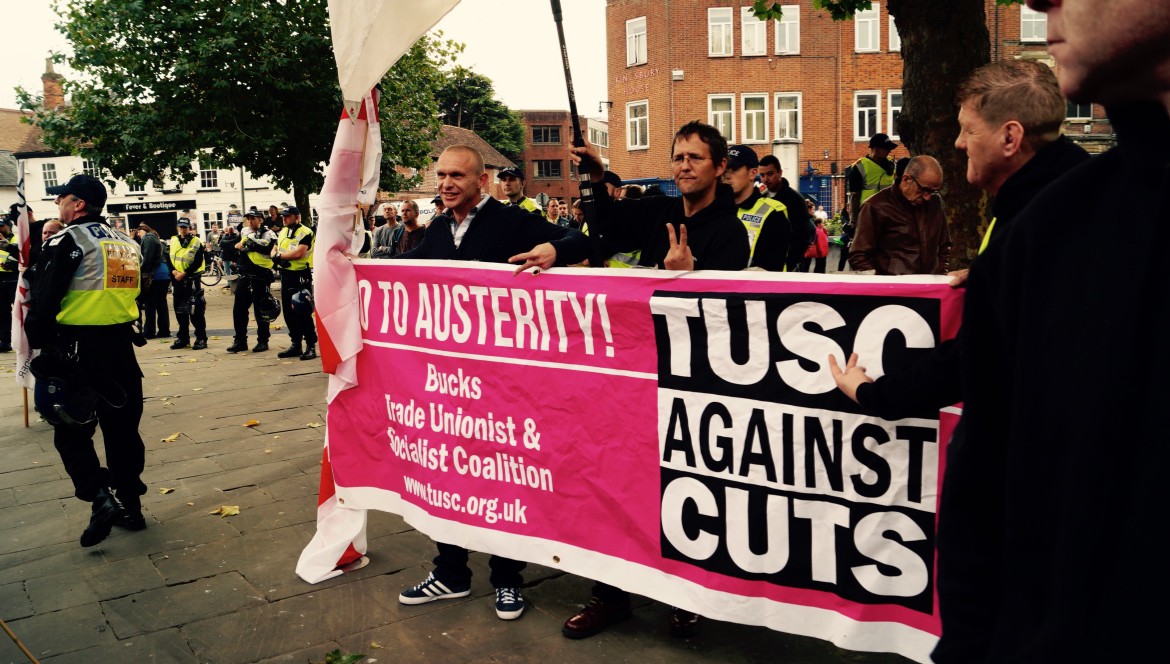 It just felt like being on the school playground with 180 balding bullies. It was boring and weird.

I wanted to hear how ridiculous the speeches were though, so I reluctently stayed. 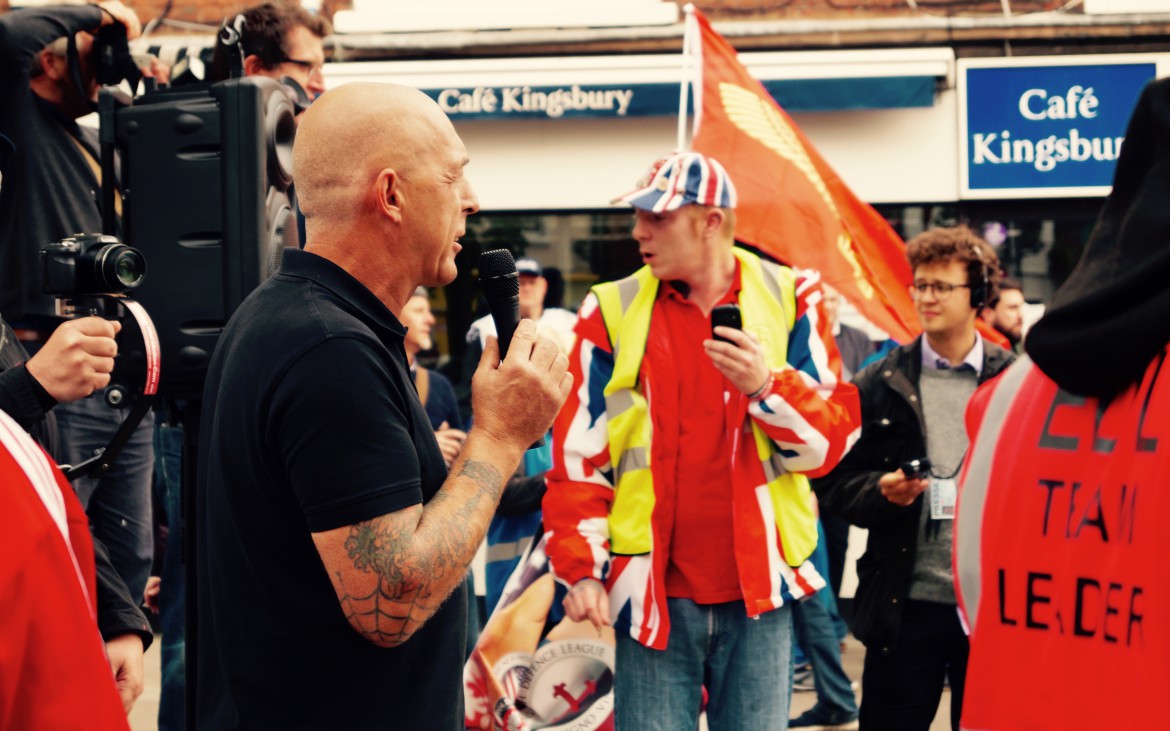 This is where things got nasty. A few people took it in turns to spew some of the most racist things i’ll probably ever hear in my life.

One of the leaders had this to say about the counter-protest, that was still going on within earshot:

“When you stand there, you unwashed, dirty scumbags, and have a go at us, you are supporting paedos. You are supporting people who mutilate their girls. Go riot elsewhere. Because we have a message. We have facts and figures. You don’t,” one speaker claimed. 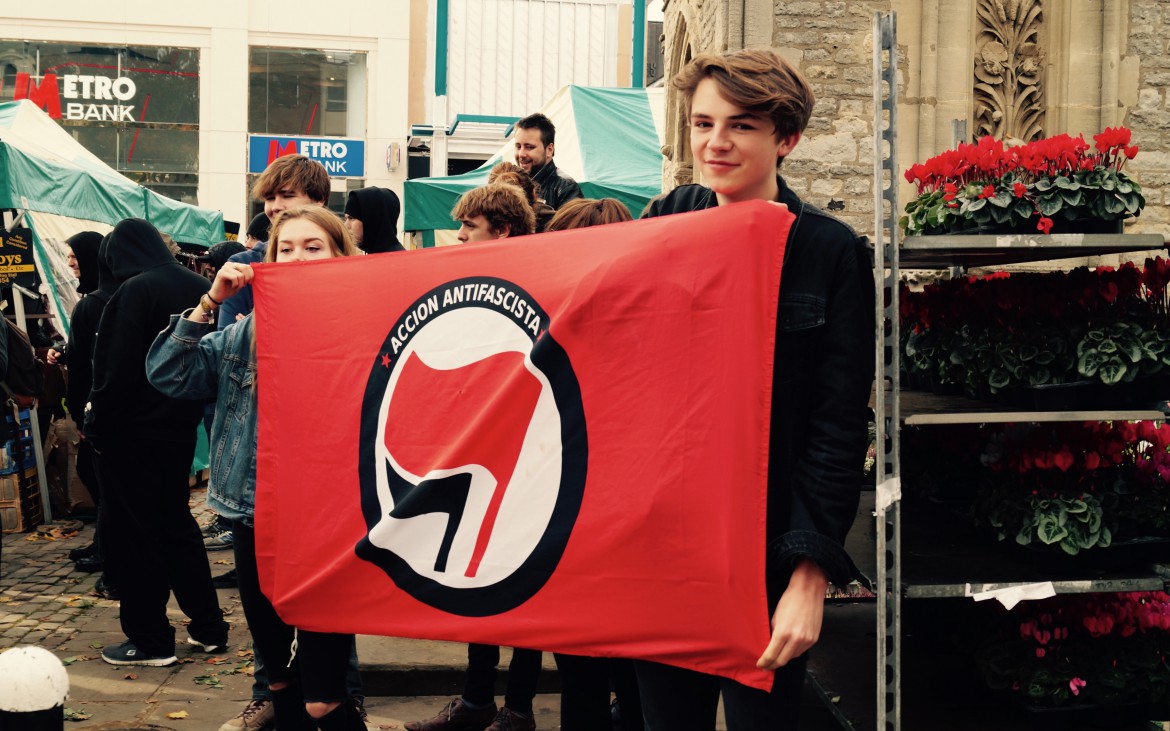 It went on like that for about half an hour, between increasingly dour chants of “E. E. EDL”. which made it sound like they regularly forgot who they were, as well as the importance of basic morality towards other human beings. 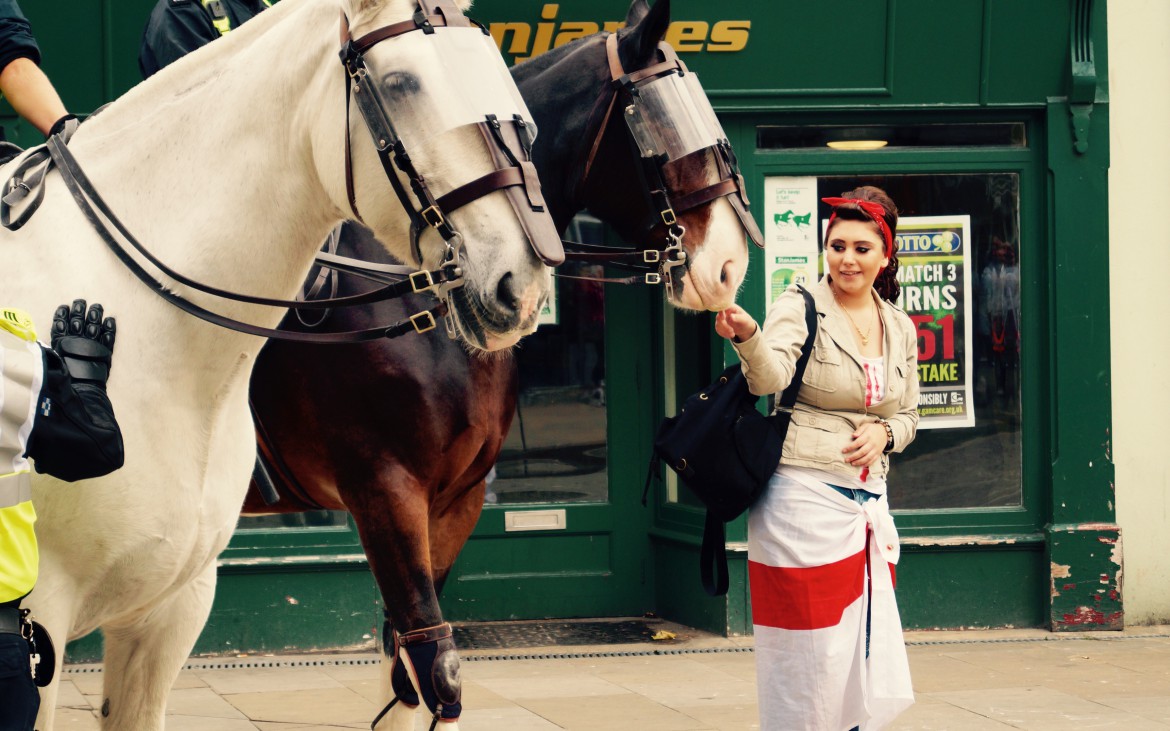 To avoid cutting my own ears off, I tried to make light of some of the especially senseless things being said, such as: “I’ve got two words for you. Well four actually. GATWICK EXPRESS OR F**K OFF!”. The whole day just made this kind of nationalism feel like a dying art.

I use the word art lightly, because the EDL’s slog through Aylesbury was actually a completely artless attempt to rekindle what is a trite, fading effort from the far-right to incite hatred and division in towns such as this.

Towns that might have flirted with the idea of a Farage-led government, but also towns that are highly diverse, and undeniably better for it.

The EDL are simply preaching to the ultra-converted. A fading minority of hangers on, to what was once something relevant and newsworthy. 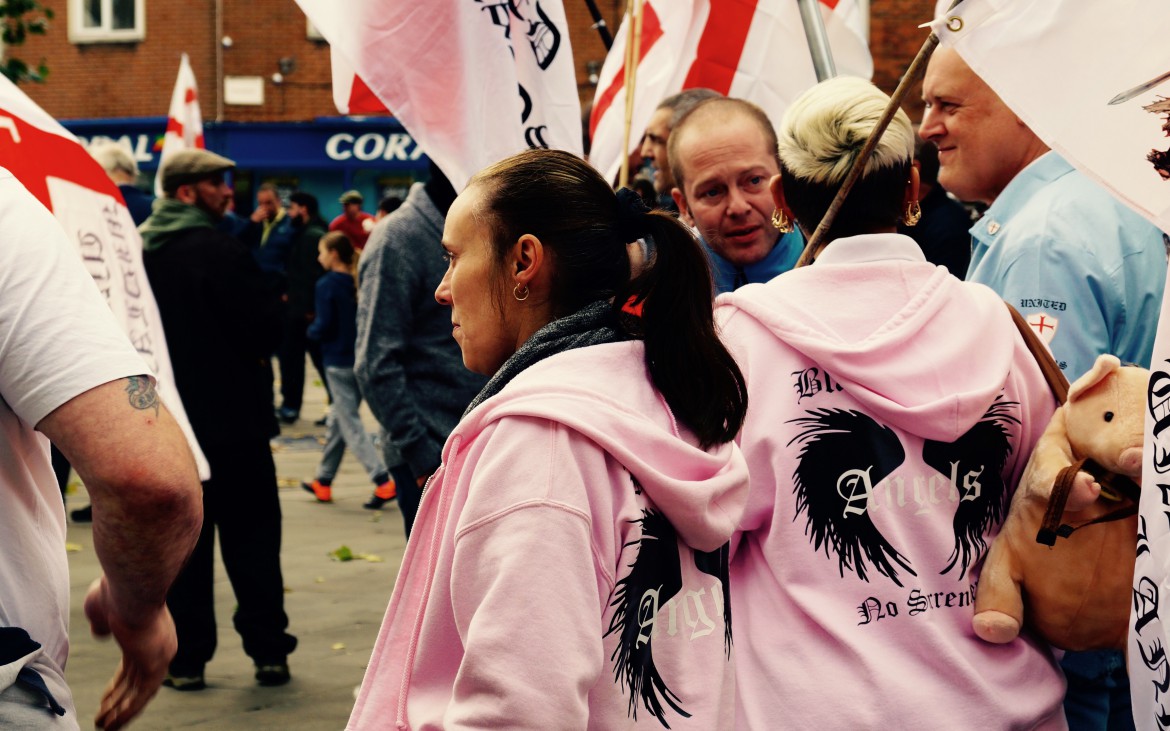 Once the speeches were done, there was a bit more chanting. Then everyone dully made their way back through town to jump on their coaches and leave. It was a far cry from the chaos and violence of five years ago.

The way the people of Aylesbury simply went about their day with no more than a glance at the group offered that they’re just tired of this now. And without the shock factor of the EDL, there is absolutely no substance. 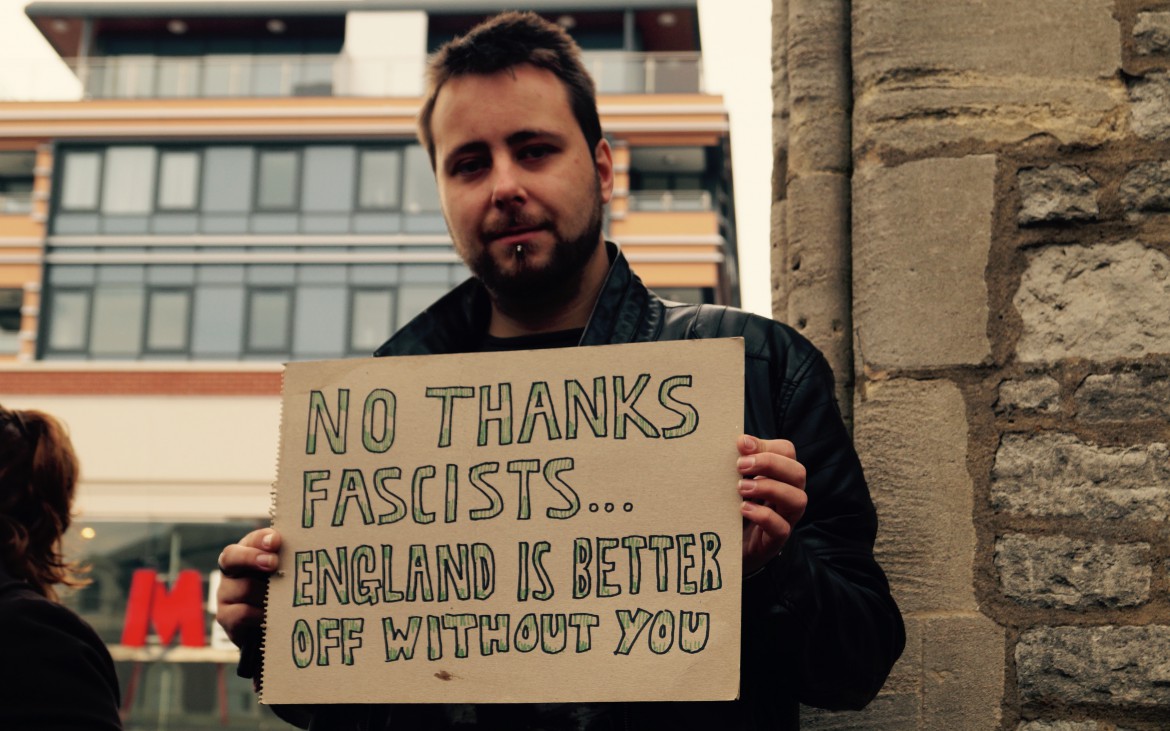 The fact their numbers were easily matched by people willing to stand up against their presence also signifies a real decline in the significance of these marches.

People aren’t afraid of the EDL anymore, and rightly so. Because the EDL shouldn’t be feared, they should be ridiculed and made to feel as irrelevant as their views. 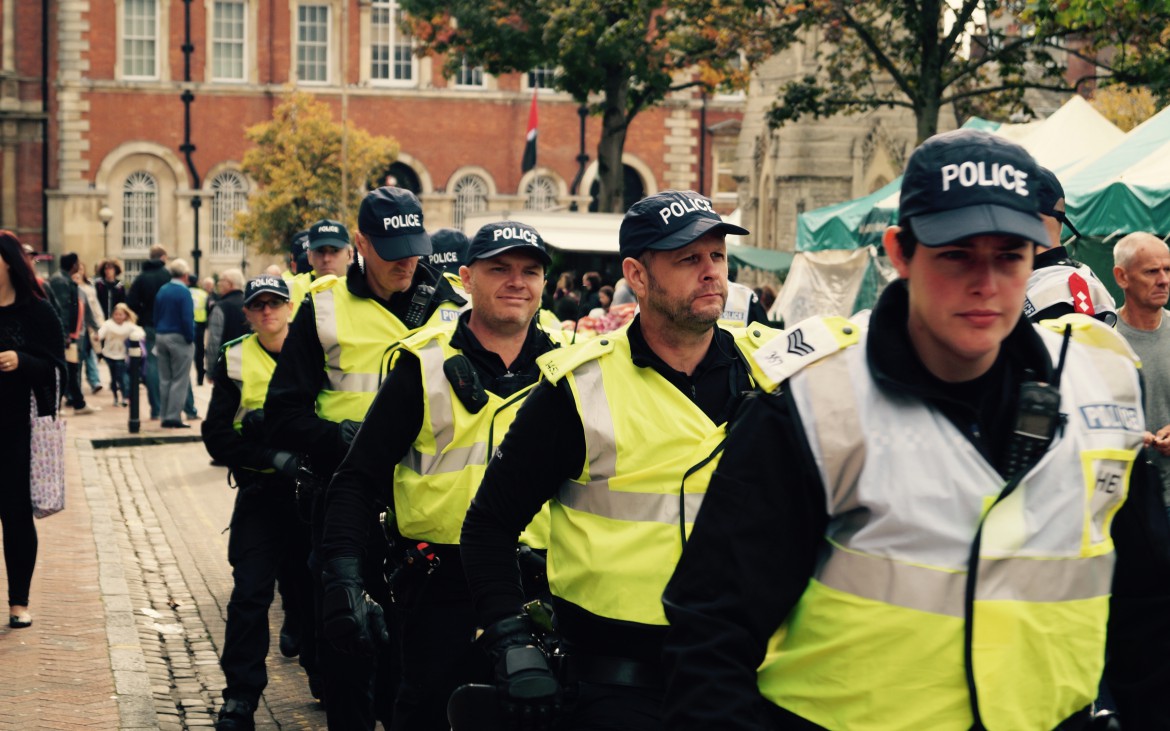 Their impact on Aylesbury was nothing more than that of a group of overzealous football fans making their way from the pub to the stand.

The pig masks and furious racism only acting to outcast them and their views even further.

If there was ever a way for the far-right to become an immediate threat to our towns and cities, this definitely isn’t it. 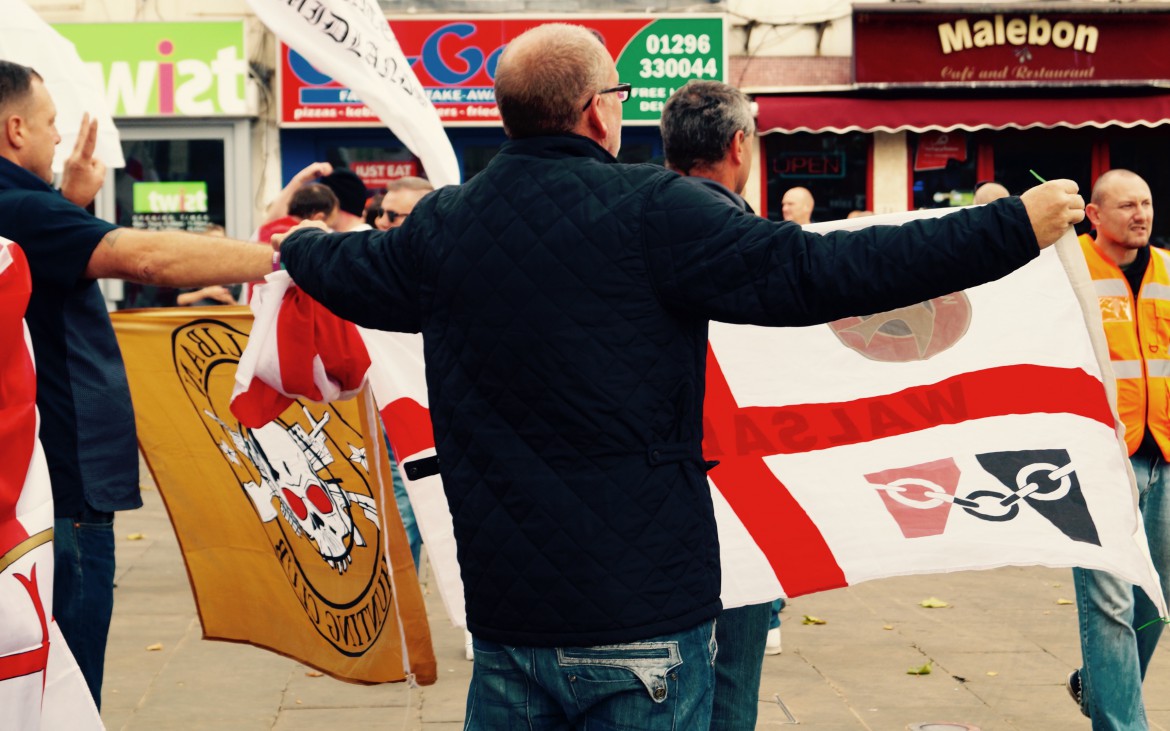 There’s also irony in the way that they came to make those of differing religions and cultures feel unwelcome, but were actually made to feel drastically unwelcome themselves.

If this march through Aylesbury is anything to go by, there has been a drastic shift in the attitudes people have towards the stupidity of the far-right in situations like this.

It’s becoming obvious and boring, and people won’t bow to it anymore. 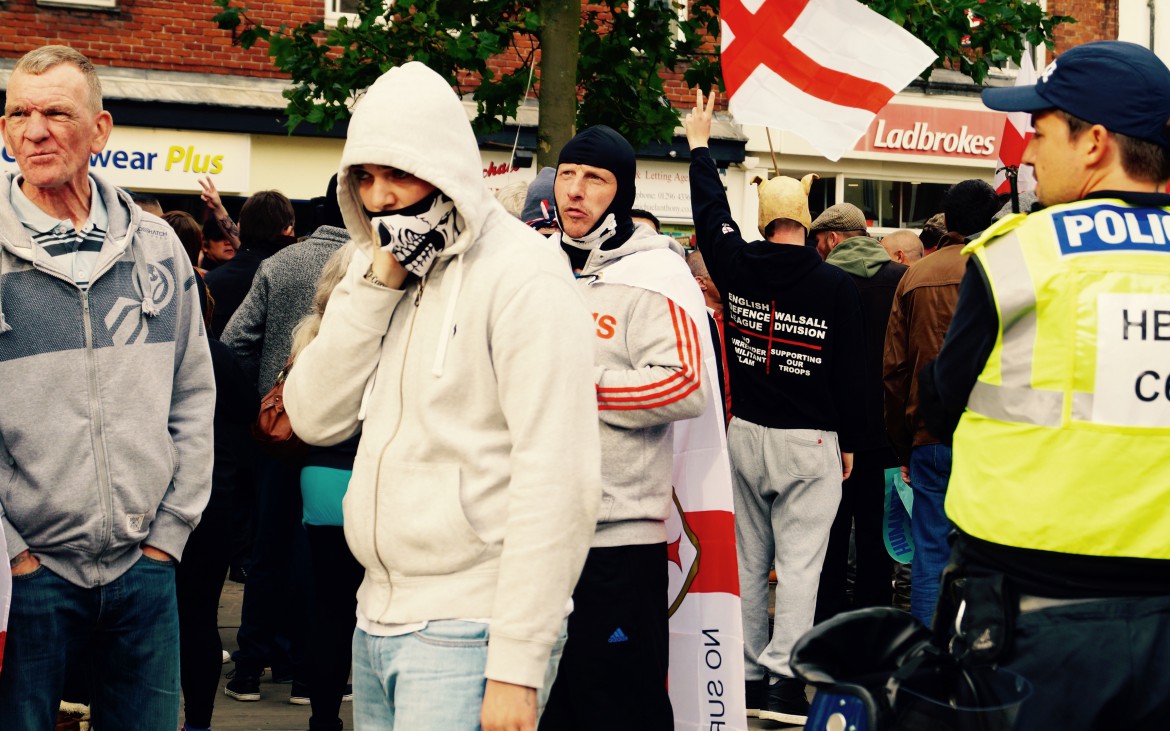 Before long, surely more and more EDL members will be following in the footsteps of their former leader and idol Tommy Robinson; knocking these weird protests on the head, and keeping their misguided, dangerous views to the confines of their Facebook feeds where they belong.

And as for the rest of us, all we can do is hope. 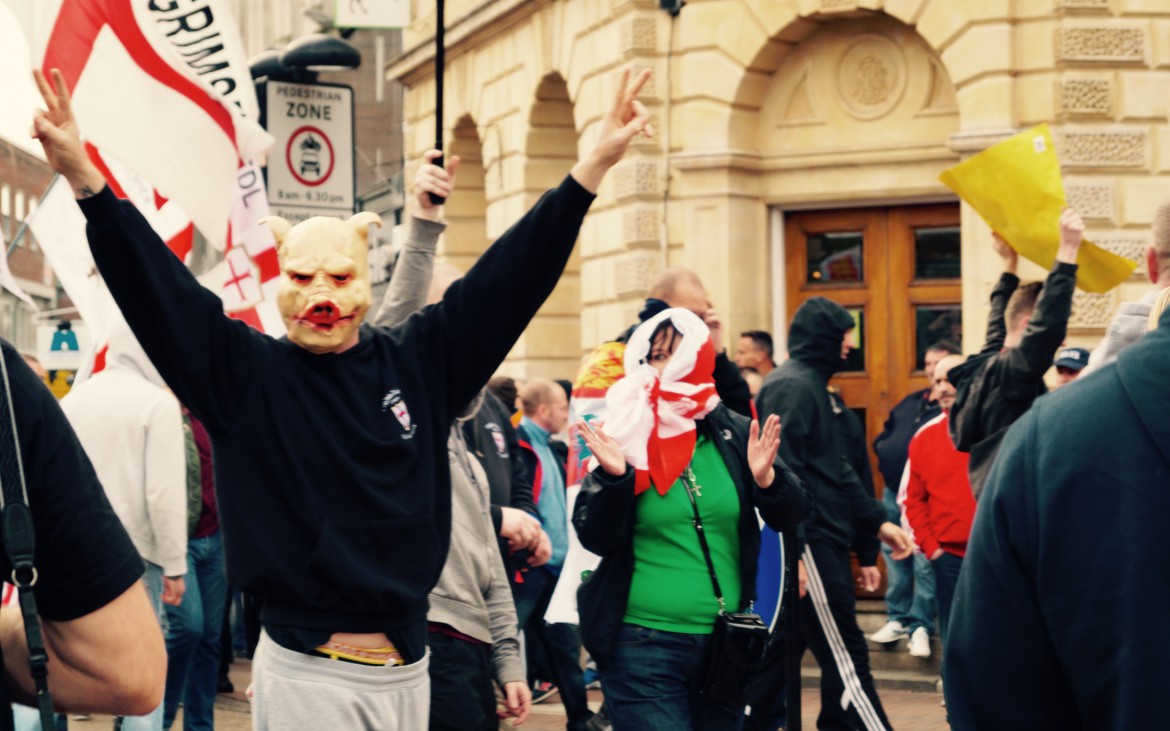 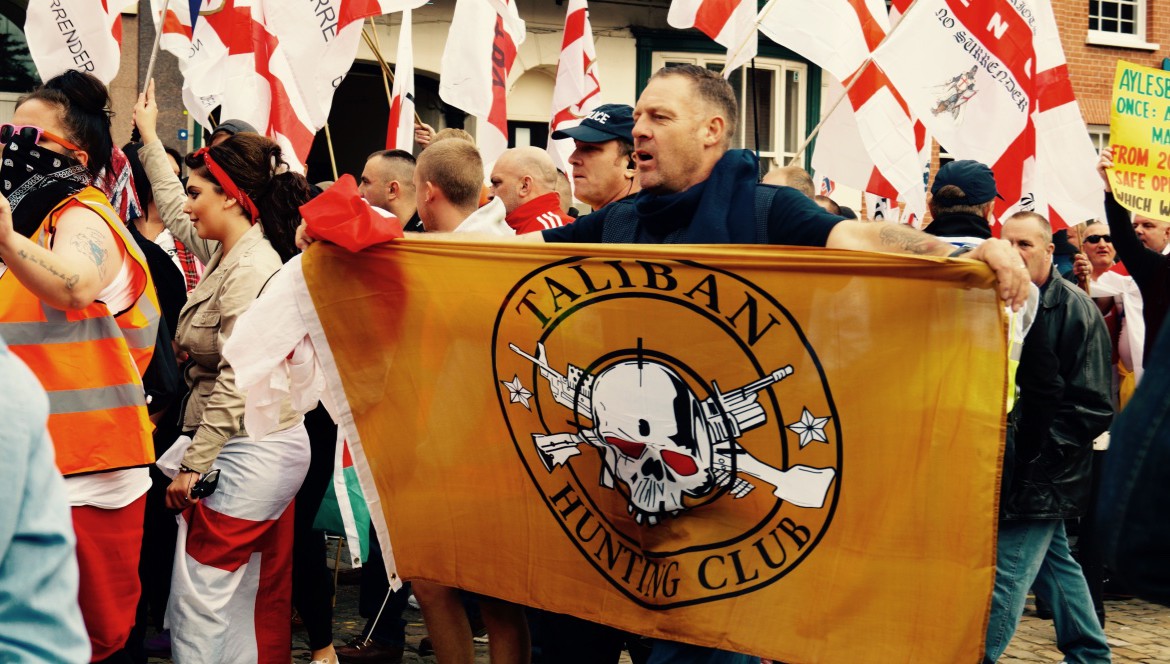 All images by Sean Littlewood.

The far-right’s new appeal to the everyman

How the EDL tried to shut down Aylesbury

A Sunday stroll with the Far Right