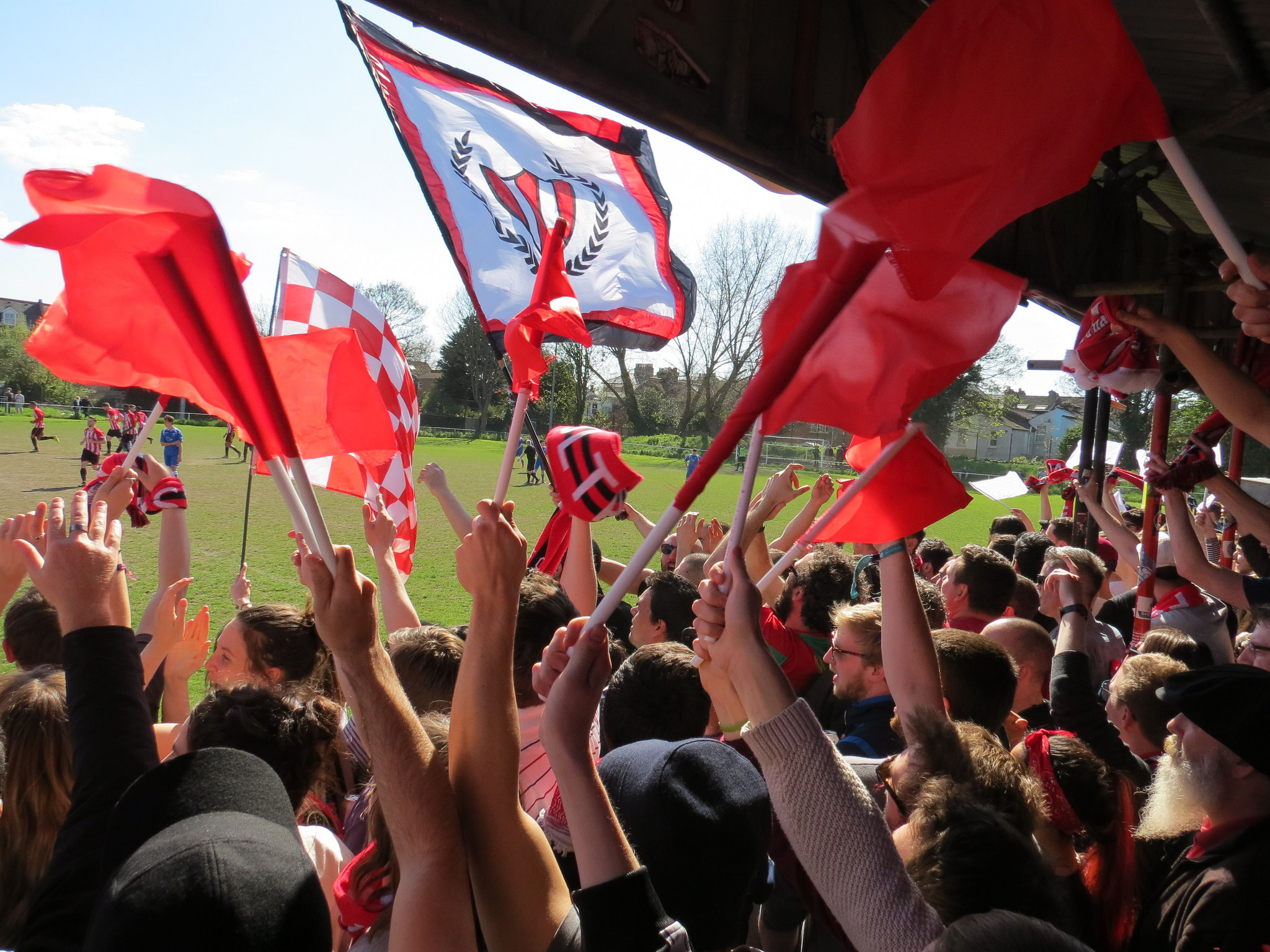 At first glance, the Old Spotted Dog is easy to miss – tucked away at the end of a quiet residential street on the outskirts of Forest Gate in the East End of London, the rundown, humble football stadium looks like any of the other countless non-league grounds that can be found up and down the country.

With one small stand that can fit roughly 50 people and a tiny block of changing rooms that resemble hastily-built concrete cells, the home of Clapton FC is modest, to say the least.

However, this unassuming monument to lower-league football has witnessed the birth of a political revolution, one that has taken its local area by storm and is grabbing headlines across the country as its band of fiercely loyal and unashamedly outspoken supporters embark on a mission to change what it means to be a football fan in 21st-century Britain.

Clapton Football Club was formed in 1878 and has enjoyed a rich and interesting history: affectionately known as the Tons, they were the first English club to play on the European mainland when they travelled to Belgium in 1890.

They are also the team with which Walter Tull, one of the first black footballers to play in Britain, started his career.

Despite this, they have spent the vast majority of their history largely unknown to the masses, rarely coming up in conversation outside of highbrow sports quizzes and in-depth historical research papers.

Just a few years ago, the club, who currently ply their trade in the Essex Senior League (the ninth tier of English football) were attracting fewer than 20 fans per game.

Since then, their popularity has skyrocketed, and it has everything to do with their new-found and sincere connection with left-wing politics.

It is a marriage that has seen supporters from across the capital flock to the Old Spotted Dog in an attempt to create a new type of football club, one that cares as much about what happens off the pitch as what happens on it.

Harry Phillips, who asked us not to use his real name, is one of the most prominent of the new breed of Clapton fans.

Unashamedly left-wing and with a background in local community work, he was initially drawn to the club by a friend and ex-West Ham United fan who had become disillusioned with top-tier football and, in his words, the “racist, sexist bullshit at Upton Park”.

Before 2012, Phillips says, there was no political element to Clapton, who were just another non-league football club playing to less fans than there were players on the pitch. But after that, everything changed.

It started with a few newcomers and quickly grew into a phenomenon.

Leftist banners and flags, which still proudly adorn the Scaffold – the main, and loudest, stand in the ground – started to make an appearance at games, and from there more people started to hear about the club as word rapidly spread.

“It was definitely one of those things that just happened,” says Phillips. “It wasn’t planned, it just emerged out of some random decisions that people had made and it grew by word of mouth.

“This phenomenon is completely new and it is as much about the politics that the people have brought to it as it is about the football.” 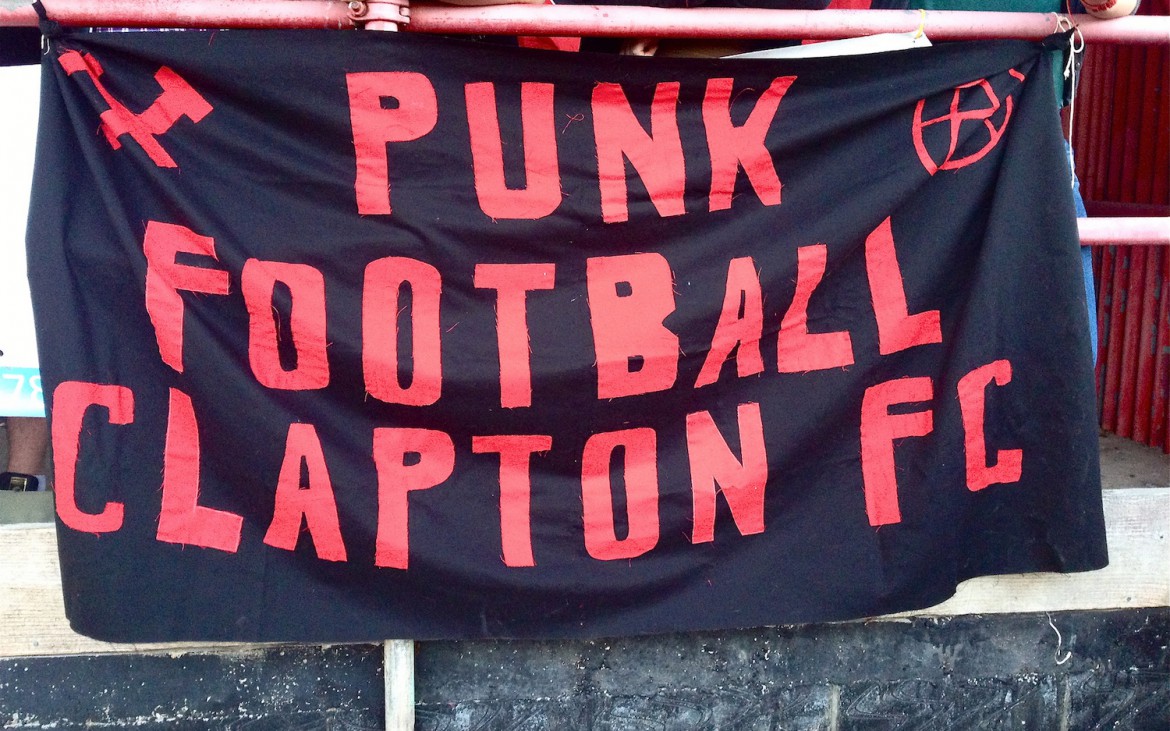 That political element is what first attracted Harry to the club, and since then he has become a dedicated and vocal part of a fan group known as the Clapton Ultras.

As more people came along to the Old Spotted Dog to support a club that was quickly growing in prominence, a link between its leftist ideals and a desire to improve the local community started to take hold.

From there, fans of Clapton started using football as a way to support local people who desperately needed help.

“I’m involved in campaigning locally and people at Clapton games were interested in doing stuff that was based around the local area and community,” says Phillips.

“One of the first things that we did was give out information about immigration enforcement teams, as there had been a lot of issues regarding that around Newham.

“There has always been this element to it where, before the football and the anti-fascism, there has been a link to try and build things in the local area.”

A force for good

“Part of what we do is about creating a space for people who want to enjoy football but also want to do it in an overtly political environment.” – Harry Phillips

That desire to use football as a vehicle for positive change is something that has continued to grow amongst supporters.

Harry and his fellow campaigners have organised regular food bank collections for refugee and migrant projects, whilst banners claiming that “Refugees are welcome” and “Nobody is illegal” are proudly displayed next to pictures of Walter Tull and Palestinian flags.

A commitment to wanting to eradicate sexist and homophobic attitudes, something the wider football community has constantly struggled to address fully, has also played a vital role amongst Clapton supporters, and they continue to help various local projects.

One of those is the Aston-Mansfield Paris LGBT youth group, which was threatened with closure but was able to stay open thanks in part to the fundraising efforts of Clapton fans.

The Ultras have also formed close links with the Focus E15 campaign and continue to support several homelessness charities across Newham.

“The core fans, the people that keep coming, understand that there is a reason why we do this,” says Phillips.

“It’s not a charitable thing, it’s about standing in solidarity with people in an area that has levels of depravation and unemployment. 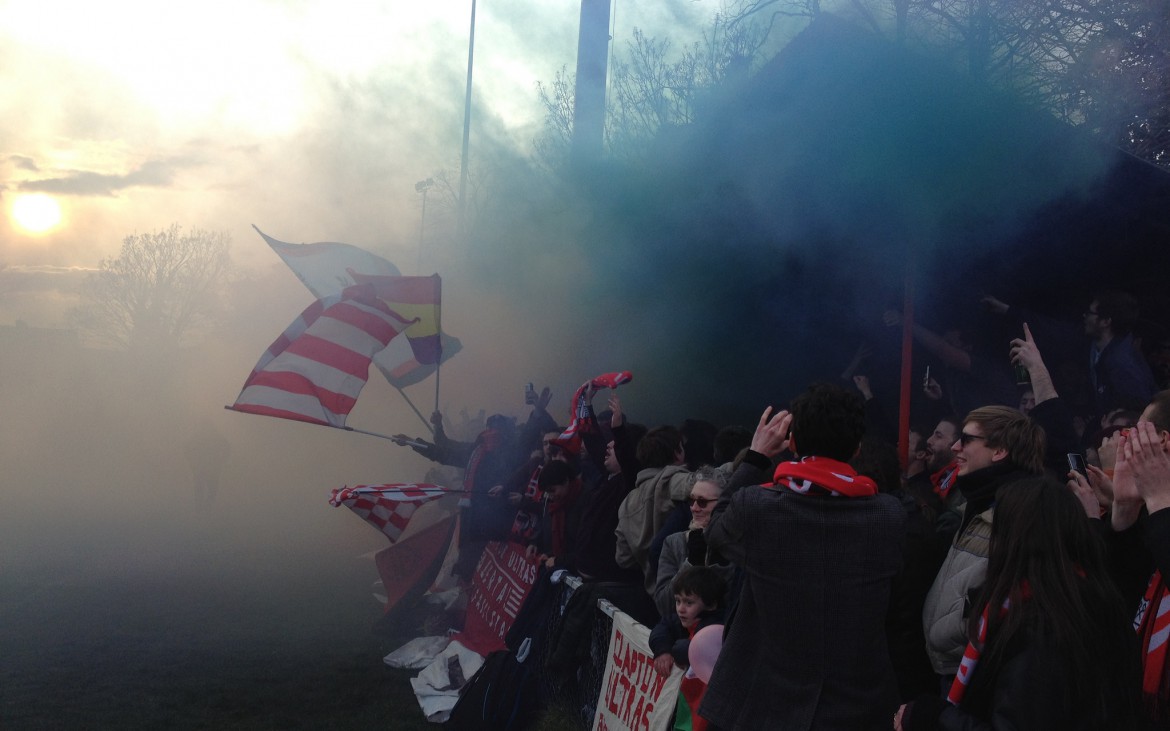 The supporters’ desire for change has in turn created a safe and friendly environment for fans from across the social spectrum.

This is particularly true for families with young children, many of whom can be seen on any given match day.

One such fan is Doug Sharp, an ex-West Ham supporter, like so many who have turned their attention to Clapton, who became tired of spending more than £50 for him and his son to visit Upton Park and instead decided to fully immerse himself in his local non-league club.

“A friend of mine was a regular here and encouraged me to come along,” he says. “Previously, I’d followed West Ham for 20-odd years but couldn’t afford the prices anymore and had a young son who I wanted to introduce to football.

“It’s just very easy to come here and pay £6, and it’s a great experience in a friendly, welcoming place.”

Planning for the future

Helping to create a community-based football club that is open and welcoming to all seems to be the main drive of Clapton Ultras, who, according to Phillips, are now content to concentrate on the work that they do in the local area while allowing the club’s support to grow.

“I think that we’ve reached the stage where a lot of people just want to consolidate what we’ve got,” he says. “The focus now is trying to make sure that it’s a club that is rooted in the community in which it’s based.

“We want to get people from the local area to come and make sure that it’s more diverse and accessible. “Part of what we do is about creating a space for people who want to enjoy football but also want to do it in an overtly political environment.

“The one thing that we hope is not that everybody from all over London comes to Clapton games but that they end up doing a similar thing in their local area.” – Harry Phillips

While the Clapton Ultras are arguably one of the most successful British fan groups to bridge the gap between political action and football, they are by no means the first.

Within several of the top teams in the country, there are small and dedicated crews that have become well known for their outspoken political beliefs, such as Brigada 1874 at Aston Villa and Celtic’s Green Brigade.

In London, non-league side Dulwich Hamlet – a community-based, politically-conscious club that has many similarities with Clapton – and their left-wing fan group known as The Rabble have quickly gained a name for themselves thanks to their voracious anti-fascist chanting and social activism.

Last season, the South London club organised an anti-homophobia friendly game against Stonewall FC – Britain’s first, and most successful, gay football team – that was attended and supported by members of the Clapton Ultras.

With clubs like Clapton and Dulwich Hamlet attracting political activists along to games and helping to connect social activism with football, the foundations are arguably there for more clubs to follow their lead.

Phillips agrees: “The one thing that we hope is not that everybody from all over London comes to Clapton games but that they end up doing a similar thing in their local area.

“It’s much more sustainable that way, because if people are organising those things for themselves then they get to adapt it to the particular circumstances of where they live.”

If that turns out to be the case, it could prove to be the start of a widespread revolution in non-league football, one that could lead to an increasing number of small, community-based teams using sport to bring about positive change in their local area.

Clapton are the first, but it is unlikely that they will be the last.