Out of the blue | An interview with Prides 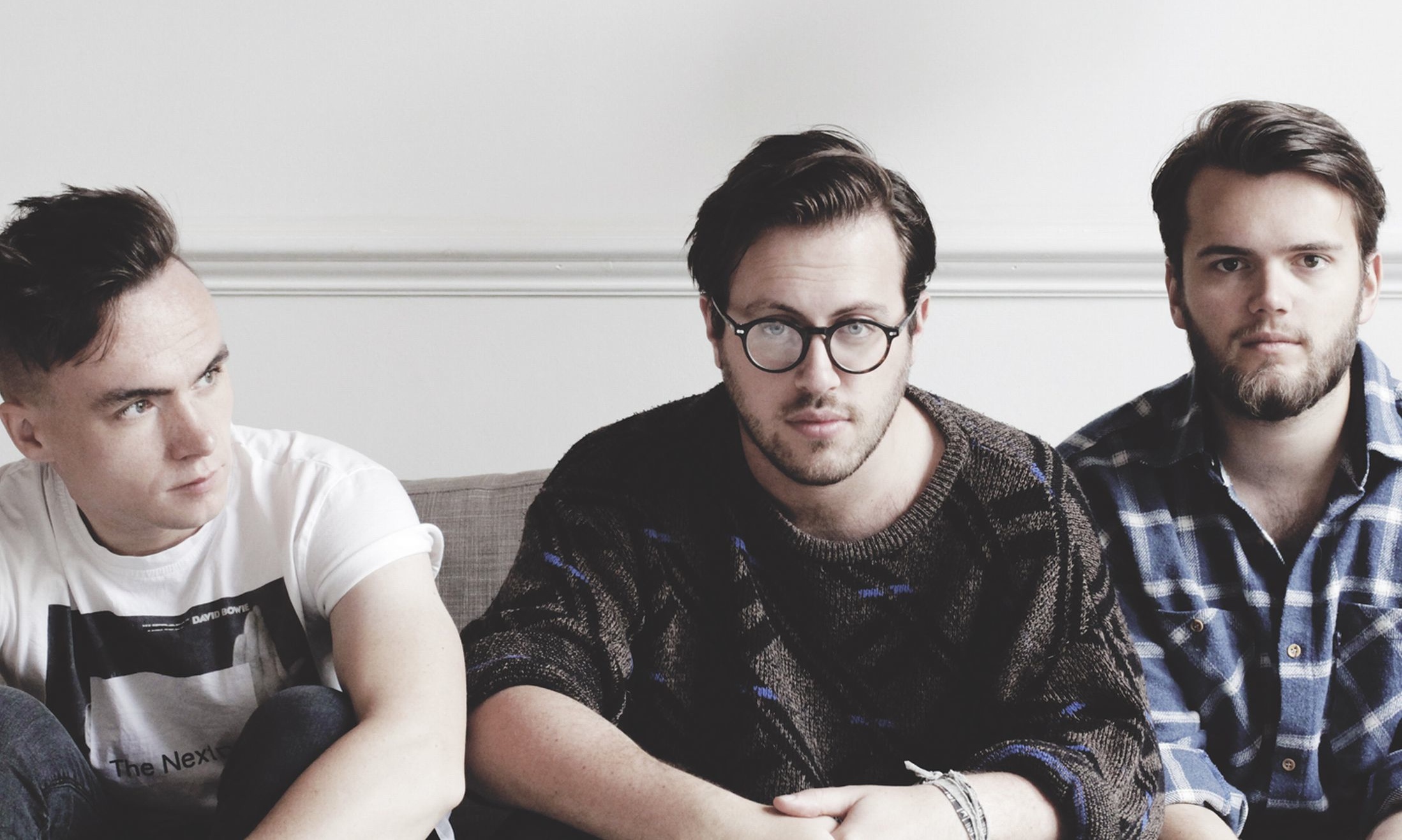 It’s easy to see that Prides are willing to shake off any indie tag thrown at them and announce themselves as carrying the flag for all that is pop.

Not pop in the cutesy, falsified way, but more the accessible, ‘we just want people to connect and enjoy what we make’, very 1980s kind of way.

This year saw the band release their debut album The Way Back Up, which might seem like stadium-lite, radio friendly synth-pop on the surface, but may actually come to represent a shift in attitude many bands have taken towards what it means to make music in the 21st century.

The Scottish synth-pop trio owe obvious ode to the high-guard of the 1980’s pop explosion.

“It was the last time pop music was really amazing,” lead vocalist and keyboard player Stewart Brock says of the era. “It was a period that needed that music, and I think we’re back into that same kind of moment.”

We’re pushed for time given the number of interviews they have today, but they haven’t lost an ounce of enthusiasm.

“There’s a lot of music that speaks to people in a positive way, during what is quite a dreary political and social climate. Maybe we need that bit of escapism.” 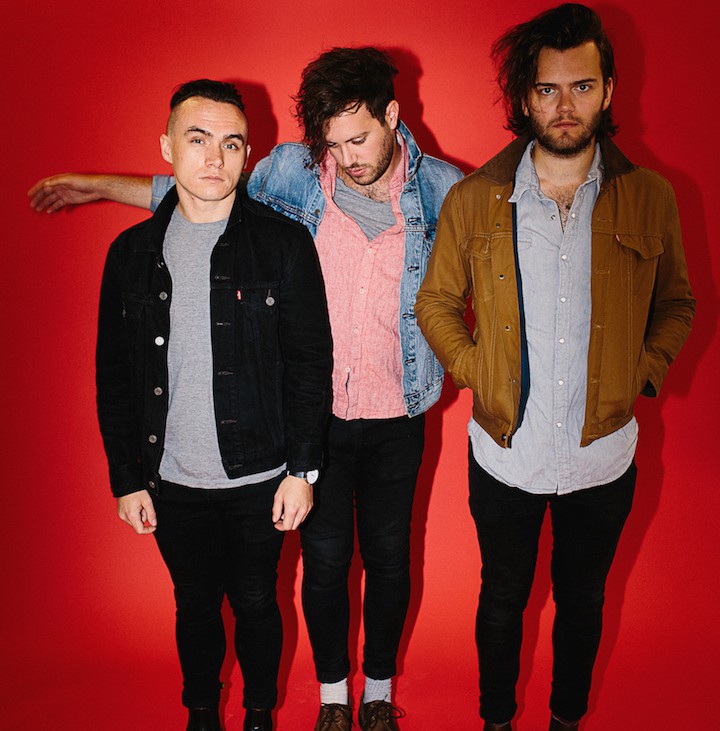 Robert Smith’s influence, especially on Brock, shines through almost every part of The Way Back Up.

Songs are crafted with a very evangelistic, pop conscious core. Hook-heavy choruses remain the biggest, most defining part of the music, with young, delicate love usually the subject matter beneath the surface.

“I always reference The Cure. I love everything about them,” Brock explains. “It’s definitely something I try and emulate.”

Drummer Lewis Gardiner enthusiastically chips in that “you can sing every part of their songs. The synth. The bass line. They were an incredible band.”

“It’s all about massive, accessible songs that when you listen to them have real heart and meaning.” Brock concludes.

“They were a musical, and general life awakening for all of us I think,” guitarist Callum Wiseman offers.

“Although we all came from different parts of the country, we all found Blink-182 and went ‘well, I’m going to learn an instrument and I’m going to start a band’.”

“There’s a lot of music that speaks to people in a positive way, during what is quite a dreary political and social climate. Maybe we need that bit of escapism.” Stewart Brock

It’s also relevant to observe how, for many bands emerging into their 20s, Blink-182 can also offer an almost lucid awakening to alternative music, acting as a gateway band to genres such as grunge, punk and 90s emo.

Brock explains how each member of Prides grew up in emo bands and how, for that reason, there is a “definite pull from bands like Jimmy Eat World, American Football and The Postal Service.”

A string of festival appearances over the summer culminated in a main stage appearance at Scotland’s pride and joy, T in the Park – a performance that fell on the day of the album’s release no less.

“It was a total joy.” Gardiner beams. “Our home crowd; our home festival.” During the performance they invited fans onstage to dance, and their set almost came to represent Prides’ willingness to progress into a stadium friendly outfit.

“They should have just printed ‘Prides Album Launch Party’ at the top!” Brock adds. “It really did just feel like five-thousand of our closest friends.” 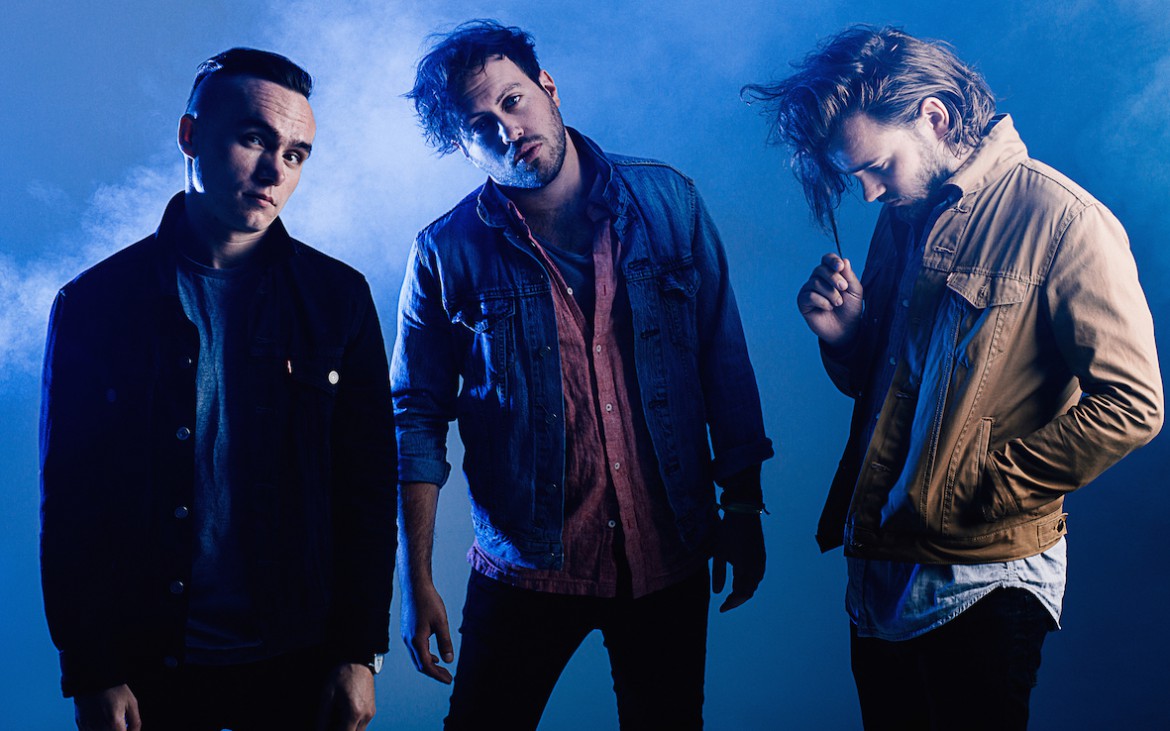 It’s this willingness to be a band that can fill a stadium that perhaps sets them apart from a few bands at the moment.

They aren’t too proud to admit what they are, or hide from what they aren’t. “From the day we started this band I just wanted to be honest,” Brock explains. “I didn’t want it to feel like we were trying to be mysterious and cool.”

The band talks with quite a refreshing openness about their intentions, which is something that’s matched in their loose, honest approach to social media.

Brock laughs when I offer this statement, “I tell you what; none of us are cool so why pretend? If I see something cool like a Pokémon card in a shop and I’m excited about it – why not post it online and share that feeling with the fans?”

“Although we all came from different parts of the country, we all found Blink-182 and went ‘well, I’m going to learn an instrument and I’m going to start a band.’” Callum Wiseman

As for the reputation of being a good enough live band to fill stadiums; was that the aim from the start for Prides? “No, we were shit at the start,” laughs Gardiner.

The authentic openness Prides offer has meant the band have managed to form a unique connection with their steadily growing, engaged fan base.

It’s also something that doesn’t seem forced, and that the band manages to talk about with quite genuine modesty.

“We really want people to be engaged with us,” says Wiseman. “We’d never have been able to play the main stage at T in the Park without the support offered from our fans. We even had a few of them on stage during our set, and it would seem stupid not to share the love a little bit. We wouldn’t be doing it without them.”

But why have so many people found it so easy to connect with Prides?

“I think because we are quite personable,” Brock explains. “I think we’re all in this, in the pop sense, to have a good time. That’s why each one of us picked up an instrument, so literally let’s just have a really good time.”

It would also seem that finishing the album and finally getting it out after two years has been the main focus of Prides since the start.

“Well yeah, definitely” says Gardiner. “The end game was always about getting this record out and just really hoping the people connect with it.”

Wiseman offers that he took “the more Dave Grohl approach. I don’t care how well it does. I just want people to hear it and like it.”

Throughout our time out in this freezing cold Scottish press area, our conversation always seems to find its way back to 1986.

“Bands like The Cure and The Smiths were writing these huge, accessible songs back then, but they also had such incredible heart and meaning. That’s all I wanted to do when I started this band,” Brock concludes.

If the aim is to try and capture the spirit and excitement of that era – one that remains so pertinent and important to the legacy of pop music – Prides aren’t far from the mark.

The Way Back Up might not make any ‘coolest album of 2015’ lists, but it isn’t trying to be that.

Its strengths, much like the band itself, lie in the honest, quite brilliant craft of the songs and the connections that people have managed to form with them.

All images provided by Twist Publicity.

Lion: The pride of British music