Save ourselves and the planet: Tax meat

The press jeered when Jeremy Corbyn appointed Kerry McCarthy – a self described ‘militant’ vegan – as his shadow farming minister, and to an extent, rightly so.

It was offbeat to appoint someone who is vehemently against animal produce to be in charge of, well, animal produce, among other things.

As someone who supports neither Corbyn nor Labour, I did have a laugh at her expense – especially at Corbyn’s claim of ‘not knowing she was a vegan’. In the first week of his leadership, you couldn’t have made it up.

What I didn’t find funny however, was the sneering taunts of the press when it was revealed that McCarthy had suggested she believes ‘that meat should be treated in exactly the same way as tobacco’ due to the associated, and some say potentially cancer inducing, health risks.

WHO’s laughing now? Well probably not WHO actually – the World Health Organisation announced a few weeks ago that they have categorised processed meat such as burgers and sausages as ‘group one carcinogens’ – which, to a presumably exultant McCarthy – is the same group as cigarettes, alcohol and asbestos.

We live in an era where everything seems to cause cancer. It’s the Daily Mail syndrome – where a supposed cause of cancer one week might cure it the next.

But this isn’t a Daily Mail whimsical half truth, plucked from a research paper without peer review. This is the World Health Organisation, a totally legitimate, trusted, UN affiliated health board with global authority: when they say something, they mean it.

The International Agency for Research on Cancer (IARC), a subsidiary of WHO, defines more than 1,000 things as either probably, possibly or definitely carcinogenic to humans.

According to their classifications, living in the polluted smog of London is as much of a risk to our health as smoking. Being out in the sun too long isn’t any better.

Drinking coffee is less likely to give you cancer than an occupational hazard such as hairdressing – but doesn’t mean a coffee drinking hairdresser is part of the proverbial walking dead.

The list doesn’t give any indication of moderation – you have to find that out for yourself. Chinese style salted fish and Areca nuts have the same classification as formaldehyde and arsenic for example.

Just 100 milligrams of Arsenic can kill a human in 24 hours, but you’d need a lifetime of Areca nuts to be exposed to their potentially carcinogenic properties.

The key, is clearly, not to live in excess. A bacon sandwich won’t kill you, but eating one every day might, eventually.

So what’s the solution? The problem with WHO’s recommendations is that they are just that – recommendations. No one actually has to listen to them, and many won’t.

Twitter went mad over the audacity that WHO should tell them how to live – ‘are we going to be prescribed steak patches to wean us off meat?’ one bemused user asked.

Not likely, unless there’s a coup d’etat by an authoritarian faction of the Green Party; with someone like Natalie Bennett or a vegetarian despot at its head, blanket-banning consumption of meat and rationing kale like Soma.

I’ve spotted a correlation however, that could be beneficial not just to consumers of cancer inducing meat, but to the planet as well.

They predict that the livestock sector accounts for 15 per cent of all global emissions – equivalent to the exhaust emissions of every vehicle in the world. 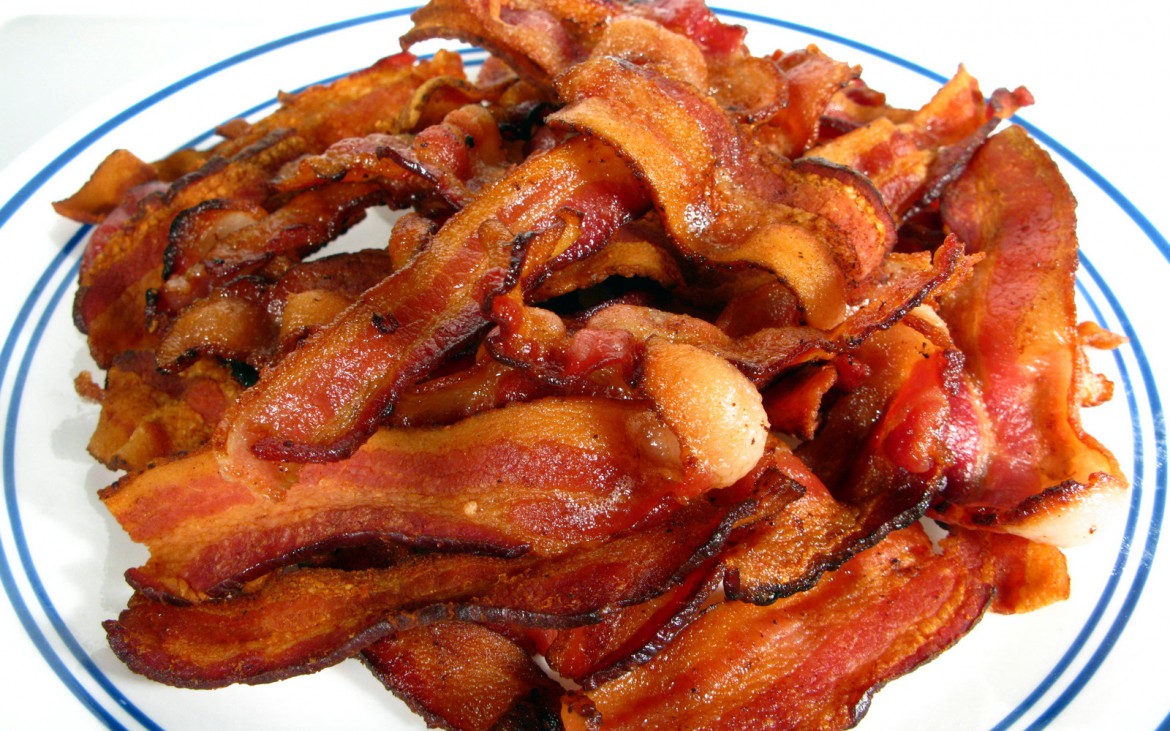 The paper from the think tank goes on to argue that ‘global meat consumption has already reached unhealthy levels, and is on the rise.

In industrialised countries, the average person is already eating twice as much meat as is deemed healthy by experts.

Overconsumption is already contributing to the rise of obesity and non-communicable diseases like cancer and type-2 diabetes, and is a growing problem: global meat consumption is set to rise by more than 75 per cent by 2050’.

Not only is meat killing us, it’s killing the planet.The report suggests that a ‘carbon tax’ of £1.76 per kilo on the price of beef could reduce overall consumption by 14%.

Other essential industries are already heavily regulated – cigarettes and alcohol have been subject to a super tax to reduce consumption for years so why not meat?

It’s quite clear that the reason people consume so much meat – especially the processed kind – is simply because it’s accessible and cheap. McDonald’s on every corner, cheap microwavable meals at Tesco – these aren’t new issues, we’ve been warned about them for years.

The issue is the demographic that consumes it – not the educated middle class, with our quinoa and smoothies – it’s the working poor who suffer, again.

According to Cancer Research UK, certain types of the disease “such as lung, mouth and oesophageal cancer – are more likely to be diagnosed in the most deprived groups” as well as there being an “association between bowel cancer incidence and deprivation for males in England”.

The link between processed meat and cancer is most prevalent in bowel cancer, and the most likely group to consume large quantities of processed meat, is deprived males.

Nanny state interference is never popular, especially when it will hit the working poor hardest. However, pricing meat out of reach of those who are most vulnerable will reduce overall consumption, reduce the burden on the burgeoning NHS and help to protect the planet in the process.

Meat should be treated as a luxury – not a commodity, while the role of government is to protect its citizens, not just from war and terror, but sometimes, from themselves.

A tax would not be popular, not for the meat lobbyists, nor the responsible consumers – but when is anything a government does popular?

Taxing alone, clearly won’t solve the problem, it needs to be combined with better education of the dangers of meat for ourselves and our planet.

The Japanese for example, enjoy some of the lowest cancer rates and longest life spans in the world because their diet is low in fat, high in carbohydrates and mostly devoid of dairy foods and processed meats.

Since the WHO announcement, UK supermarkets reported a “£3m drop in sales of sausages and bacon in the two weeks after the report’s publication, as shoppers digested the news and considered the health effects of eating them”.

That’s the backlash of just one report. The same thing happened with WHO’s announcement about the dangers of a high sugar diet.

It seems only right that Governments must lead on raising awareness of the link between not just diet and climate change, but diet and cancer also.

The two combined are a somewhat nihilistic double hit that can’t be ignored. Currently governments overestimate the risk of public backlash and their inaction signals to the public that the issue is unimportant or undeserving of concern.

A complicated campaign isn’t necessary, a simple message will suffice. Schools must do more to help children who will in turn educate their parents.

Governments must do more to price meat according to the risk it poses. A public health campaign must ensue in the same way it has for other carcinogens. Green policy resonates with more than just hippies. It’s now beyond obvious that globally, we need to eat less meat.