Who the fuck are the Lemonists?

“You have to fight for your right to be FABULOUS,” one colourful protester barked through a yellow-framed megaphone.

As I paraded around with this group of free spirited activists I felt subjectively under dressed, wearing leopard print jeans, an over-sized rainbow shirt and some platform creepers.

These creative people are pushing the boundaries with their vividly vibrant attire, more likened to an art form than an outfit.

They bounced around the streets of Central London, shouting “Be fabulous, be you,” and “If life gives you lemons be more fabulous,” from Piccadilly Circus to Leicester Square, drawing crowds of people interested in what these daring artists had to say.

Though having light-hearted intentions, the Lemonists are no joke. They know what its like to be ridiculed for their appearance and they’re not standing for it anymore.

In their outrageously dressed protest, one of their many aims is to brighten people’s day, and when I was strutting around Central London with the gang they certainly did this.

Lemonist Harry Whitfield said that although they’re relatively new and have only taken to the streets twice, their message won’t be diluted.

“I want to inspire the next generation to express their creativity in a positive and loving way,” he said. “We want action put in place against cat calling and street harassment, especially on night buses in London. We fight for everybody’s right to be fabulous in any way they can. Throw some glitter on it.”

In a year that, on the surface looks like equality prevailed, where gay marriage was legalised in all fifty states and one of the worlds most famous athletes came out as transgender. It appears we’re becoming more liberal. But name-calling and segregation is still occurs in many daily lives.

Appearance is cited as the number one reason for being bullied, with 51% saying they were bullied because of attitudes towards how they look.

To some, what the Lemonists are doing would be seen as stupid, attention seeking and pointless. What exactly are you trying to prove sashaying around central London sporting every God-given colour of the rainbow and holding giant signs? 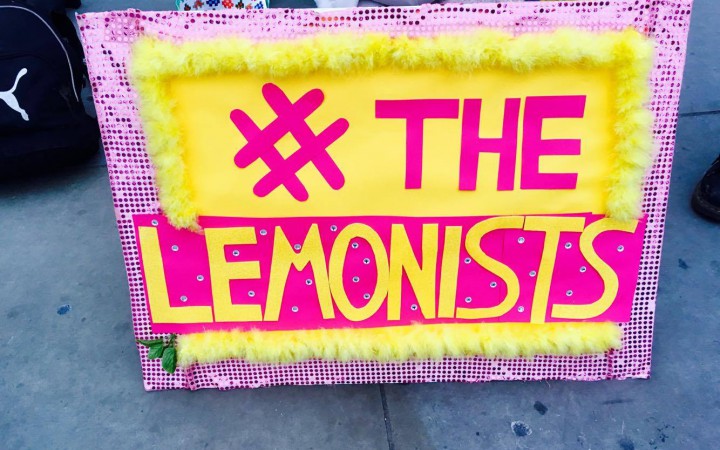 The message the Lemonists are transcending speaks volumes, especially since I’ve fallen victim to the negativity that follows when you’re feeling yourself in six-inch platforms.

You shouldn’t be worried about being yourself; about dressing in a way that you feel makes you or makes you unique. As long as you’re happy that’s all that matters.

This kind of feel-good message was the underlay of this protest. No matter what people say, the Lemonists won’t take your shit.

Crystal Star is the reason Lemonists came about. She brought so much sass to the protest, with long, colourful braids and an attitude to match – when her how it came about, of course, the answer was a sassy one.

“One of our Lemonist family, Bambi Blue, coined the term Lemonist after having a dream in which I was similar to Rosie the Riveter in the ‘You can do it’ posters but a zestier version! Leading up to this we had an overdose of lemon coincidence’s occurring such as someone giving me a lemon at ‘Sink the Pink’ which I adorned with rhinestones, hence the motto ‘When life gives you lemons…Be more Fabulous’ When faced with prejudice, harassment and discrimination do something positive to make a change.”

Well this bunch is certainly zesty, and Crystal Star wants respect and equality for everyone. So many people preach this, yet they’re the most judgmental of all.

They’re fighting against discrimination; one particular victory for them would be the laws regarding harassment to be taken more seriously. With their avant-garde, bright outfits, they’re making themselves more visually appealing to interest more people in what they’ve got to say.

They started considering a protest to “Be more fabulous” whilst at another protest for saving the Black Cap in Camden, sadly another pioneering venue in the LGBT community falling victim to gentrification.

Camden has changed, and this sparked a revival in becoming more fabulous.

Crystal says: “You rarely see the fabulous creatures in Camden anymore. We need to get fabulous back.” They took their rants on to Facebook about harassment to the streets to make a more positive London.

“David Cameron is certainly not a Lemonist,” Crystal Star said when asked about her opinion on our current Government.

“I wish our society worked on fairness of equality for everyone rather than in favour or the privileged few. I was shocked to hear David Cameron’s pledge to scrap the human rights act, whilst every statement in the Human Rights Act is so vital, many stand for what we believe in e.g. ‘Freedom of expression’.”

If your life is giving you lemons, and you want to be more fabulous, get involved, anyone can.